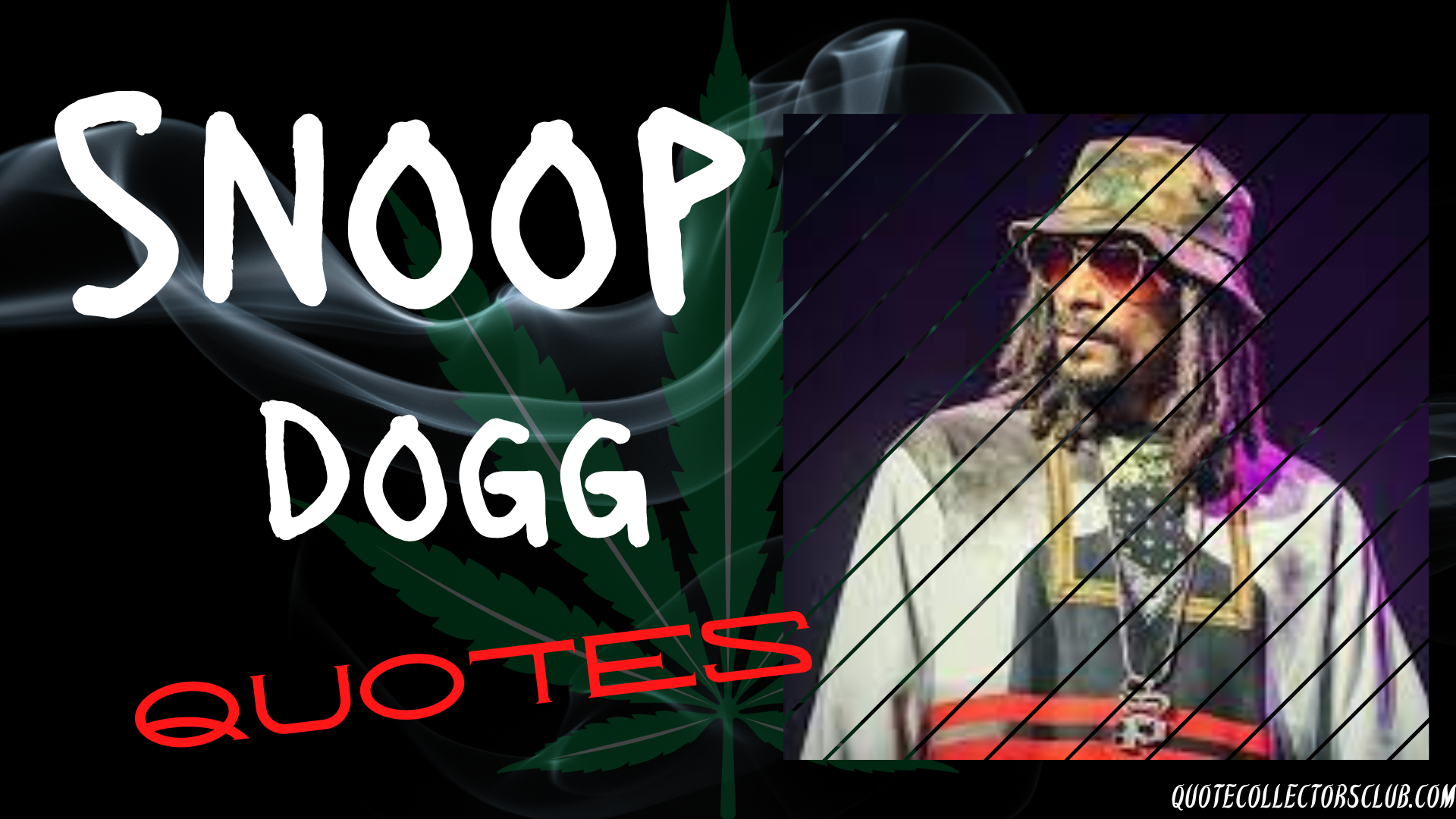 There’s no denying that Snoop Dogg is one of the most well-known and successful rappers in history. His unique voice and laid-back style have won him legions of fans worldwide. But Snoop is special because of his ability to drop wisdom bombs between his lyrics.

So, are you ready for some amazing Snoop Dogg quotes that will make you think, laugh, and maybe even nod your head in agreement.

He has also collaborated with some of the biggest names in music, including Dr. Dre, Justin Timberlake, and Psy. In addition to his musical success, Snoop Dogg has also carved out a successful career as an actor and television personality.

He has starred in movies like Starsky & Hutch and Old School and currently hosts his reality TV show, Snoop Dogg’s Father Hood. There’s no doubt about it: Snoop Dogg is a true icon of American pop culture.

Snoop Dogg will be the next scene in the sports drama “The Underdoggs,” and he will also be producing the project; let’s take a look at some of the best Snoop Dogg Quotes:

1. “If you stop at general math, you’re only going to make general math money.”- Snoop Dogg

The quote by Snoop Dogg states that if individuals don’t continue their education and push themselves to do better, they will only make a general amount of money. He is trying to encourage people to excel in their studies to get higher-paying jobs.

Snoop Dogg is a legend in the hip-hop world, and he’s also known for his love of weed. In fact, he’s even been quoted as saying, “The more medicated, the more dedicated.” And while some people might interpret this as simply meaning that weed makes him more productive, there’s actually much more to it.

For Snoop, weed isn’t just about getting high and making music; it’s about relaxation and self-care. When he’s medicated, he’s able to focus more on his craft and channel his creative energy. In other words, weed helps him to be a better artist. And that’s why he’s one of the most successful rappers in the world.

4. “If it’s flipping hamburgers at McDonald’s, be the best hamburger flipper in the world. Whatever it is you do, you have to master your craft.”- Snoop Dogg

Snoop Dogg is one of the most successful rappers in the world, and he didn’t get there by half-assing his craft. In this quote, he’s saying that if you’re flipping burgers at McDonald’s, you should try to be the best burger flipper in the world.

And no matter what you do, you should strive to be the best at it. This is a great philosophy to live by because it shows that even if you’re not doing something you love, you can still find ways to be successful and happy.

5. “Trump says he wants to run for president. Why not? It wouldn’t be the first time he pushed a black family out of their home.”- Snoop Dogg

6. “They say I’m greedy, but I still want more ’cause my eyes to want to journey.”- Snoop Dogg

7. “Equality is about achievement: whoever achieves the most gets treated the most equal.”- Snoop Dogg

In this quote, he’s talking about Equality and how he believes it should be based on achievement. He believes that whoever achieves the most should be treated the most equally. This is an interesting perspective, and it’s something to consider.

8.  “Love goes unappreciated a lot of times, but you still gotta keep giving it.”- Snoop Dogg

9. “Everybody wants to be a winner. Winning for you is everything, right? Wrong, winning is the only thing!”- Snoop Dogg

In many ways, Snoop Dogg is right: winning is everything. Success is often defined by our ability to achieve our goals, and those who can consistently come out on top usually reap the most rewards.

Whether in our careers, relationships, or personal lives, winning can lead to a sense of accomplishment and satisfaction. And while it’s not always easy to be a winner, the rewards can be well worth the effort.

Even when we make mistakes, the truth will eventually come out, and people will see us for who we really are. We should always stay true to ourselves and believe in our own goodness, even when others might doubt us. Ultimately, the truth will always come out in the end.

11. “You might not have a car or a big gold chain; stay true to yourself, and things will change.”- Snoop Dogg

12. “Sometimes a loss is the best thing that can happen. It teaches you what you should have done next time.”- Snoop Dogg

Anyone who has ever competed in a sport knows that feeling of disappointment after a loss. However, as the great Snoop Dogg once said, sometimes a loss is the best thing to happen.

It teaches us what we should do next time. A loss can show us our strengths and weaknesses and motivate us to work harder to succeed. In the end, a loss is only temporary – it’s what we do after a loss that really counts.

13. “You’ve got to always go back in time if you want to move forward.”- Snoop Dogg

The quote by Snoop Dogg is often used to describe the importance of financial security. For many people, their mind is always on their money because they are concerned about making ends meet.

This can be a very stressful way to live and prevent people from enjoying life to the fullest. However, Snoop Dogg’s quote suggests another way to live. Instead of worrying about money, he suggests people focus on making more money.

This doesn’t mean that people should become obsessed with money, but it does mean that they should put their financial security first. By doing so, they can free up their mind to enjoy life and pursue their passions.

Snoop Dogg is one of the world’s most well-known and respected rappers. Over his long and successful career, he’s amassed a wealth of wisdom from which any entrepreneur could benefit.

We hope you enjoyed these 15 quotes. If you have any suggestions, let us know in the comments!