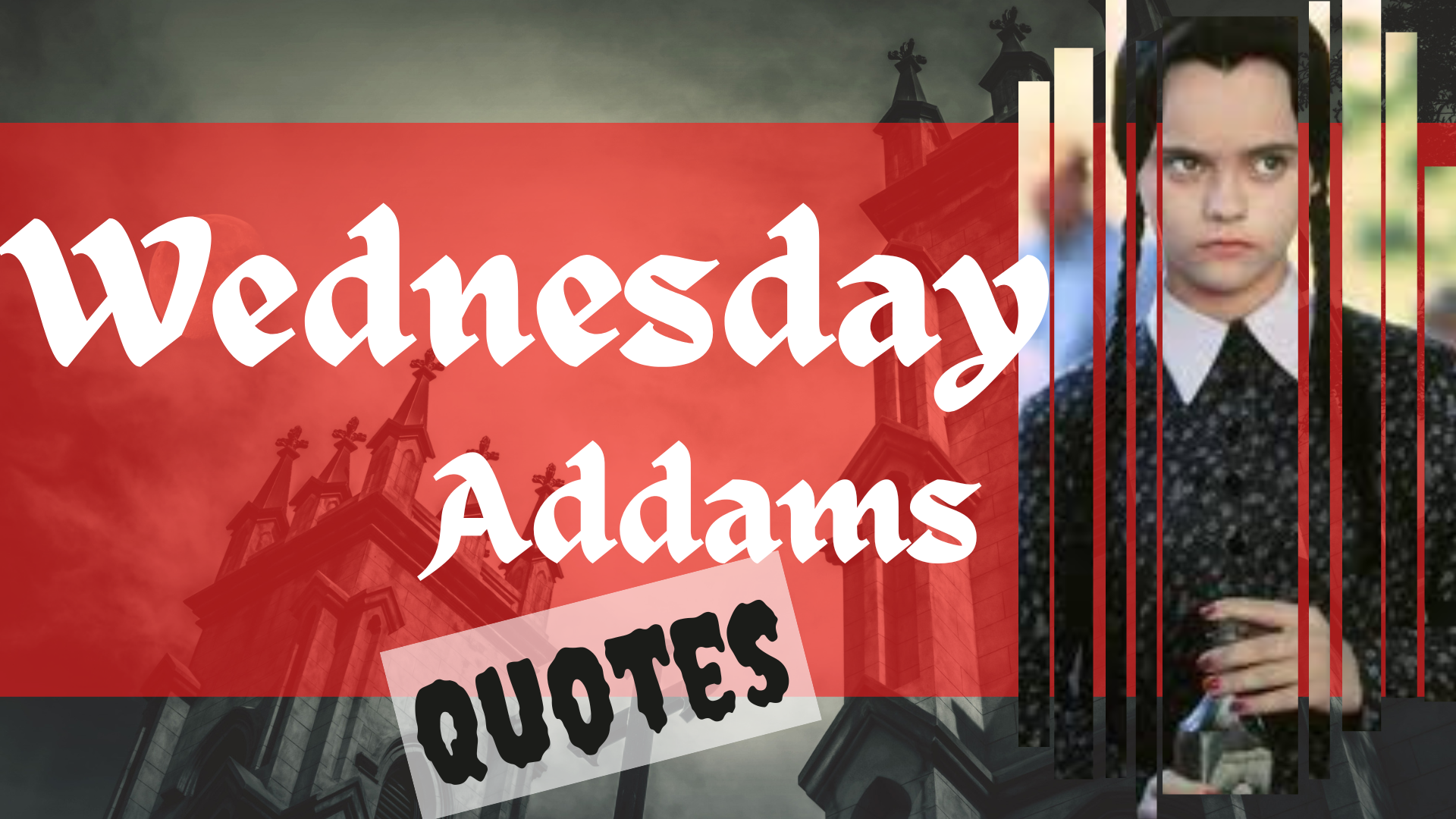 If you’re a fan of dark humour, then Wednesday Addams is a character worth getting to know. She’s the daughter of Gomez and Morticia Addams, a Goth icon with a sharp wit and an even sharper tongue. Wednesday Addams’s quotes are hilarious, and they offer a unique perspective on life that is both refreshing and darkly humorous.

If you’re looking for some dark inspiration in your life or just want to laugh at the absurdity of it all, then be sure to check out these Wednesday Addams quotes!

Wednesday Addams is a fictional character created by American cartoonist Charles Addams. She is the daughter of Gomez and Morticia Addams and the sister of Pugsley Addams. Wednesday is characterized as a gloomy, dark-haired child with a certain sadness in her eyes.

In many ways, she is the “black sheep” of the family, as she is the only one who seems to truly embrace their macabre lifestyle. Wednesday is often seen participating in activities that are traditionally considered “dark” or “evil,” such as playing with her pet spider “Homer” or brewing potions.

However, she is also shown to be a kind and caring individual, particularly towards her brother Pugsley. In spite of her gothic persona, Wednesday is a lovable and iconic character.

Wednesday is often seen carrying a scary headless doll named Marie Antoinette, Adding more dimensions to her strange dark personality. Let’s explore some of the most popular Wednesday Addams quotes that offer a glimpse into her unique worldview.

1. “Everyone knows it. When you have a new baby, one of the other children has to die.”- Wednesday Addams

Wednesday Addams is a character from the Addams Family, created by American cartoonist Charles Addams. She is known for her dark sense of humour and morbid outlook on life. In the above quote, Wednesday discusses the “fact” that when a family has a new baby, one of the other children has to die.

Obviously, this is not a real fact, but it is an interesting perspective. Some people might interpret the quote to mean that Wednesday believes families should only have one child because otherwise, someone will get neglected or hurt.

Others might interpret it as a joke about how chaotic and overwhelming life can be with a new baby in the house. Either way, it’s a clever and memorable quote that perfectly encapsulates Wednesday Addams’ dark personality.

Does it matter?”- Wednesday Addams

There’s a popular misconception that people who are introverted or have a generally negative outlook on life are in a bad mood all the time. This simply isn’t true! In fact, many people who fall into these categories are perfectly content with their lives and don’t see the need to put on a happy face for the sake of others.

As Wednesday Addams so succinctly puts it, “I am not in a bad mood; this is just me.” And there’s absolutely nothing wrong with that! So if you find someone who looks like they’re in a bad mood, don’t assume that they are. They could just be introverted, or they could simply be comfortable being themselves. Either way, there’s no need to try and change them.

4. “But what if you met the right man, who worshipped and adored you? Who’d do anything for you? Who’d be your devoted slave? Then what would you do?”- Joel

The quote by Wednesday Addams is quite cynical, but it highlights an important point about relationships. Namely, even if you find someone who seems perfect for you, there is always the possibility that the relationship won’t work out.

Wednesday points out that if she found herself in a relationship with a man who worshipped and adored her, she would actually feel sorry for him. This is because she knows that no one can be perfect and that even the most devoted slave will eventually disappoint her.

Ultimately, Wednesday is saying it’s better to be alone than to be in a relationship with someone who isn’t right for you.

6. “Wednesdays at that very special age when a girl has only one thing on her mind.”-Morticia Addams

9. “What’s so great about being yourself when you can be like everyone else?”- Wednesday Addams

10. “Remember, Bethany. I’m not locked here with you; you’re locked in here with me.”- Wednesday Addams

11. “This day is becoming most wonderfully disruptive.”- Wednesday Addams

12. “They never tell us anything interesting, like how many heads they chopped off in the French revolution.”– Wednesday Addams

13. “No one torments my family but me.”- Wednesday Addams

Wednesday is willing to do whatever it takes to defend her loved ones, even if it means stepping into the role of tormentor herself. In a way, this quote also speaks to the unique bond that Wednesday shares with her family.

They may be bizarre and dysfunctional, but they are also the only people who truly understand her.

14. “This is the worst thing that has ever happened in the history of human events. Uncle Fester’s getting married.”- Wednesday Addams

15. “I’ll buy a cup if you buy a box of my delicious Girl Scout cookies.”- Girl Scout

“Are they made from real Girl Scouts?”- Wednesday Addams

In this quote, she shows her trademark wit by asking a Girl Scout if her cookies are made from real Girl Scouts. Of course, the Girl Scout is taken aback by the question, but Wednesday is just being her usual curious self. And while we may never know what she was really thinking, we can all appreciate her clever use of words.

16. “I hate everything.”– Wednesday Addams

19. “It’s getting dark in this little heart of mine.”- Wednesday Addams

The quote by Wednesday Addams is a metaphor for the character’s emotional state. The word “dark” can represent a number of different things, including sadness, anger, and fear.

In this case, it is likely that the character is feeling overwhelmed by negative emotions and is struggling to see the positive side of things. The use of the word “little” suggests that the character feels powerless and insignificant in the face of their problems.

This quote highlights the character’s internal struggles and provides insight into their emotional state.

20. “Nobody gets out of the Bermuda Triangle, not even for a vacation. Everyone  knows that.”- Wednesday Addams

Wednesday Addams is one of American pop culture’s most iconic and beloved characters. Her quotes are dark, funny, and often on point. We hope you enjoyed this collection of her ideology and gothic humour as much as we did.

If you have any favourite Wednesday Addams quotes we missed, let us know in the comments!