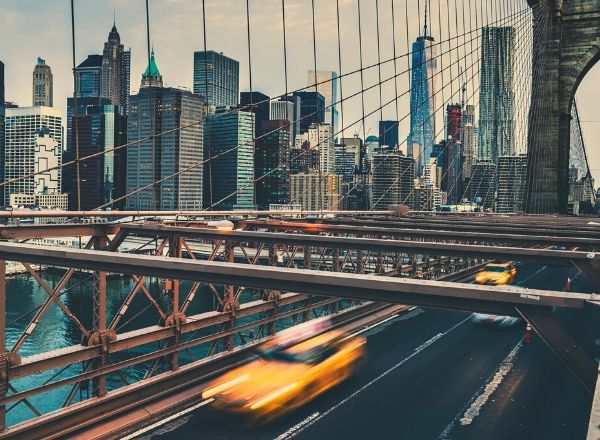 If you’re looking for quotes about the USA’s largest city and cultural center – look no further. We’ve compiled a list of the greatest NYC quotes from the vast array of writers and artists who lived and loved there.

New York City is a place that generates a mythos of its own and goes by many names: The Big Apple, the city that never sleeps, or simply “The City.” It’s sprawling and diverse, drawing people from all walks of life to its five boroughs and hundreds of neighborhoods.

Musicians and artists, punks and financiers, celebrities and regular folks – they all find a version of their dream life in New York.

And writers are no exception.

Across the corpus of American literature, the specter of New York looms large. There’s even a poetic movement from the ‘50s and ‘60s called the “New York School,” boasting writers such as Frank O’Hara and John Ashbery.

Allen Ginsberg’s Beat Generation was centered in NYC. William S. Burroughs’ semi-autobiographical novel “Junky” takes place there too. In contemporary literature, Hanya Yanagihara’s massive tome of a novel “A Little Life” follows the experiences of a group of friends and lovers in New York, while painting a detailed portrait of the city itself.

From that wealth of literature centered around the Big Apple, we’ve compiled the best quotes about NYC. So whether you’re looking for inspiration to visit, encouragement to follow your dreams, or an Instagram caption for your New York travel pics, read on below!

NYC has made an indelible mark on the American imagination since its inception, and continues to draw people of all stripes to its streets.

It’s earned its various monikers and the literary attention it gets for being one of the most important and energetic places on the planet.

We hope these NYC quotes helped pique your interest in New York, or provide some useful phrases for your own conversations about the city that never sleeps.

We ❤️ quotes too!

This is the place where you will always find the right words at the right time.