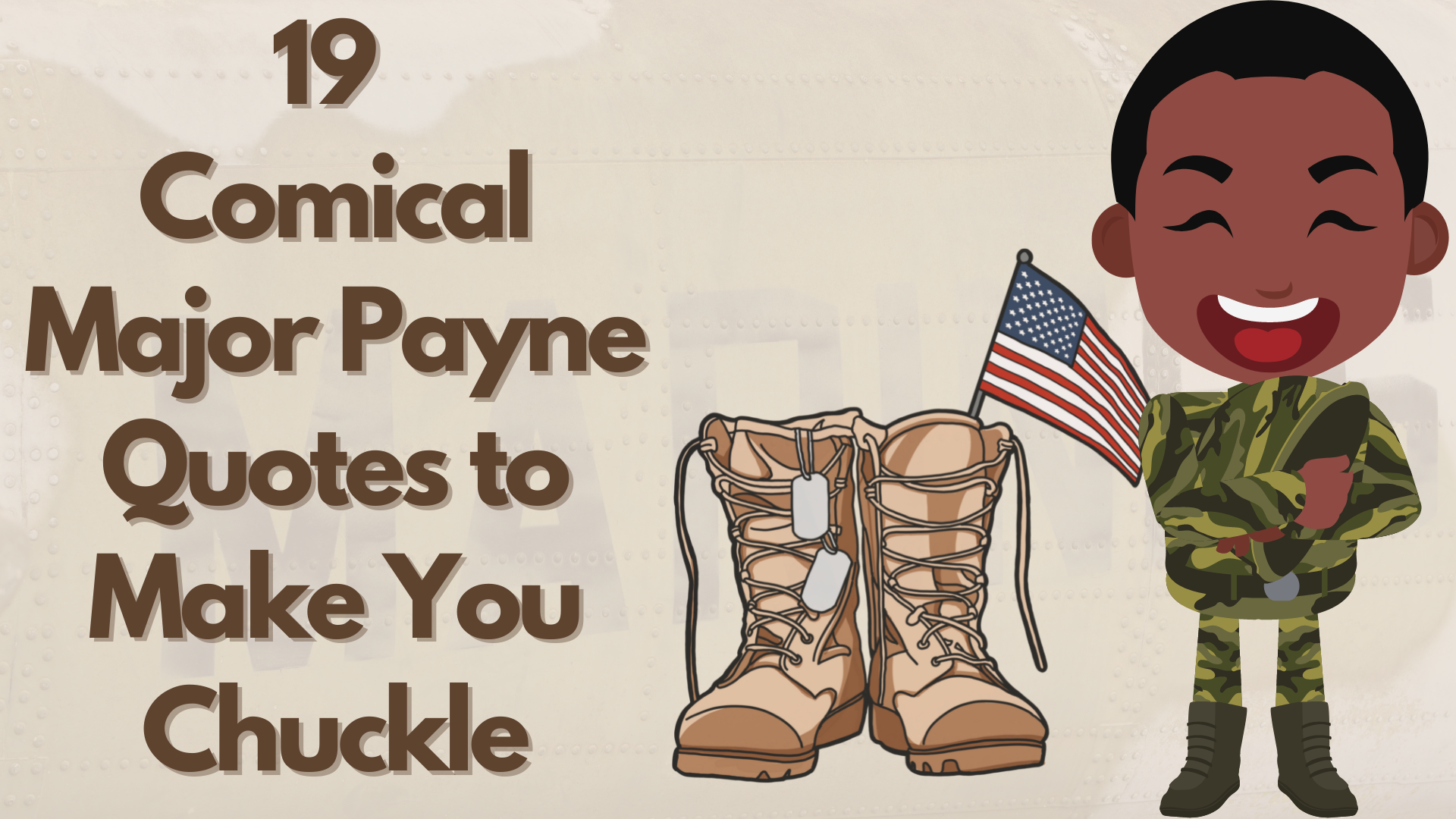 If you’re looking for a laugh, then you need to check out Major Payne. This 1995 American military comedy film is full of hilarious quotes from the main character, Major Payne.

Whether he’s teaching new recruits how to shoot or giving one of his signature speeches, Major Payne always knows how to deliver a zinger. In this article, we’ll take a look at some of the best quotes from the movie. So put on your dress blues and get ready for some laughs!

About the movie “Major Payne”

Major Payne is a 1995 American military comedy film starring Damon Wayans as the titular character. The film follows Major Payne, a highly decorated Marine officer who is discharged from the corps after a tragic incident.

He then takes a job as a drill instructor at a local preparatory school, where he quickly realizes that his no-nonsense style of discipline is not going to be well received. However, with the help of his students, he eventually learns to lighten up and connect with them on a more personal level.

Major Payne is a hilarious and heartwarming film that perfectly captures the spirit of the military. Anyone who loves comedies will absolutely adore this movie!

The film was a box office success, grossing over $80 million worldwide. It received mixed reviews from critics but was praised for its humor and Wayans’ performance. Major Payne is considered to be one of the most popular military comedies of all time. Let’s jump into the quotes!

1. “From now on, my little group of shaved scrotum sacks, you will walk like me, talk like me, eat like me, and until you win those games, you will be bald like me.” – Major Payne

As any fan of Major Payne knows, the film’s titular character is a no-nonsense Marine who is tasked with training a group of young boys from the preparatory school. In one iconic scene, he orders that boys’ heads should get shaven.

While it may seem like a simple act of defiance, shaving one’s head can actually be a powerful way to show solidarity with others. By shaving their heads, Major Payne and his recruits are showing that they are all in this together – they are united by a common goal and a common cause.

This act of unity is sure to help them achieve their goals, both in the film and in real life.

2. “Be advised, ladies. We are going to win the Virginia Military Games this year! You will note my emphasis on the word WIN: Whisky! India! November! Get used to the sound of that word!” – Major Payne

Major Payne’s rallying cry to his troops is an inspiring example of the power of positive thinking. by visualizing their success and speaking it into existence, the team was able to achieve their goal of winning the Virginia Military Games.

This goes to show that setting your sights high and believing in your ability to reach your goals can make all the difference in achieving success. So, whatever your goals may be, remember to keep your eye on the prize and never give up on your dreams.

With a little hard work and determination, you can make anything happen.

Throughout history, there has been pressure for boys to “become men.” In some cultures, this is done through coming-of-age rituals, while in others, it is simply a matter of reaching a certain age.

In recent years, there has been an increased focus on what it means to be a man. Some people believe that being a man is simply a matter of anatomy, while others feel that it is more about mindset and actions.

Whatever the case may be, there is no doubt that becoming a man is an important milestone in life. For many boys, the journey to manhood is filled with challenges and obstacles.

Overcoming these challenges can help to build character and confidence. In the end, becoming a man is an individual journey that is unique to each person.

5. “One! Don’t you feel dumb. Two! Look at you. Three! Don’t you ever make jokes about me behind my back, or else I’ll stomp you into the ground.” – Major Payne

This is what Major Payne wants us to understand; Today is the day to let go of all your worries and stress. You deserve to relax and enjoy yourself. So take a deep breath, exhale slowly, and just let it all go.

Let go of that grudge you’ve been holding onto, let go of that hurt from the past, and let go of that worry about the future. Just for today, put all of it aside and breathe easy. Be in the moment and savor the good things in your life.

Let go of your stress and allow yourself to feel the joy of living in the present moment. When you do, you’ll find that got no worries got no stress is the best way to live. Go ahead and give it a try!

7. “I guess I just had that one a coming. Well, you know what y’all got a comin’? 723 hour days of fun and adventure. I’m gonna make you boys strong!” – Major Payne

While the quote may seem simple, it holds a lot of truth. Adjusting to civilian life can be difficult, especially for those who have spent their lives in the military. There are a lot of changes to get used to, and it can be easy to feel lost and alone.

However, it is possible to adjust and even thrive in civilian life. It just takes time, patience, and a bit of understanding. With the right support, anyone can make the transition and find success on the other side.

9. “You know, there ain’t no pets allowed on this premises, Mr. Ace Ventura.” – Major Payne

10. “What could be more important than having my boys winning this here competition? I suggest we get this party started. Is that okay with you Colonel?” – Major Payne

11. “Aw, phooey! Don’t you ever read any of those stories about little people who do big things? Little Red Riding Hood! The Three Little Pigs! Spike Lee! The Little Rascals! How about the Little Engine That Could!” – Major Payne

12. “Negative. I figure if the Marines wanted me to have a wife, they would’ve issued me one.” – Major Payne

The Marines are a very demanding organization, and they often ask their members to make significant sacrifices. For many Marines, getting married simply isn’t practical.

In addition to the demands of their job, Marines also have to contend with long periods of deployment. This can make it difficult to maintain a healthy relationship.

Some couples choose to wait until after their time in the Marines to get married, but for others, it simply isn’t an option. Ultimately, whether or not to get married is a personal decision that each Marine has to make for themselves.

13. “A squad that lives together, wins together! Unity, turds—that is the key word in ‘UNIT,’ without the ‘Y!’” – Major Payne

In Major Payne, the title character is a no-nonsense Marine who is brought in to reform a group of misfit cadets. One of the first things he does is to instill a sense of unity among the squad.

He knows that “a squad that lives together wins together.” By making them live and train together, he builds bonds of friendship and trust that will help them succeed.

The squad soon learns that unity is key to their success, and they are able to overcome their individual differences to become a cohesive unit. As Major Payne says, “Unity, turds—that is the key word in ‘UNIT,’ without the ‘Y!'”

14. “Major Payne, can you please help me to understand why you shaved the children bald?” – Emily Walburn

As Emily Walburn tells Major Payne in the movie Major Payne, “Let me be more direct–they hate you.” The reason the cadets hate him is because of his tough attitude towards them.

What they don’t realize is that his tough attitude is only a façade to hide his true feelings. He actually cares deeply for them and only wants what’s best for them. It’s only when they begin to see him as a father figure that they start to respect and admire him.

In the end, Major Payne becomes the motivator and leader they need to succeed.

18. “They won’t let me go on a ‘Black Op,’ because I’m too little, and nobody ever lets you do anything when you’re little.” – Cadet Kevin Dunn

If you’re in the mood for a little comedy, Major Payne is a great movie to watch. And if you need a good laugh, these 19 quotes from the film are sure to do the trick.

We hope you enjoyed them! Do you have any favorite quotes from the movie that we missed? Let us know in the comments below.