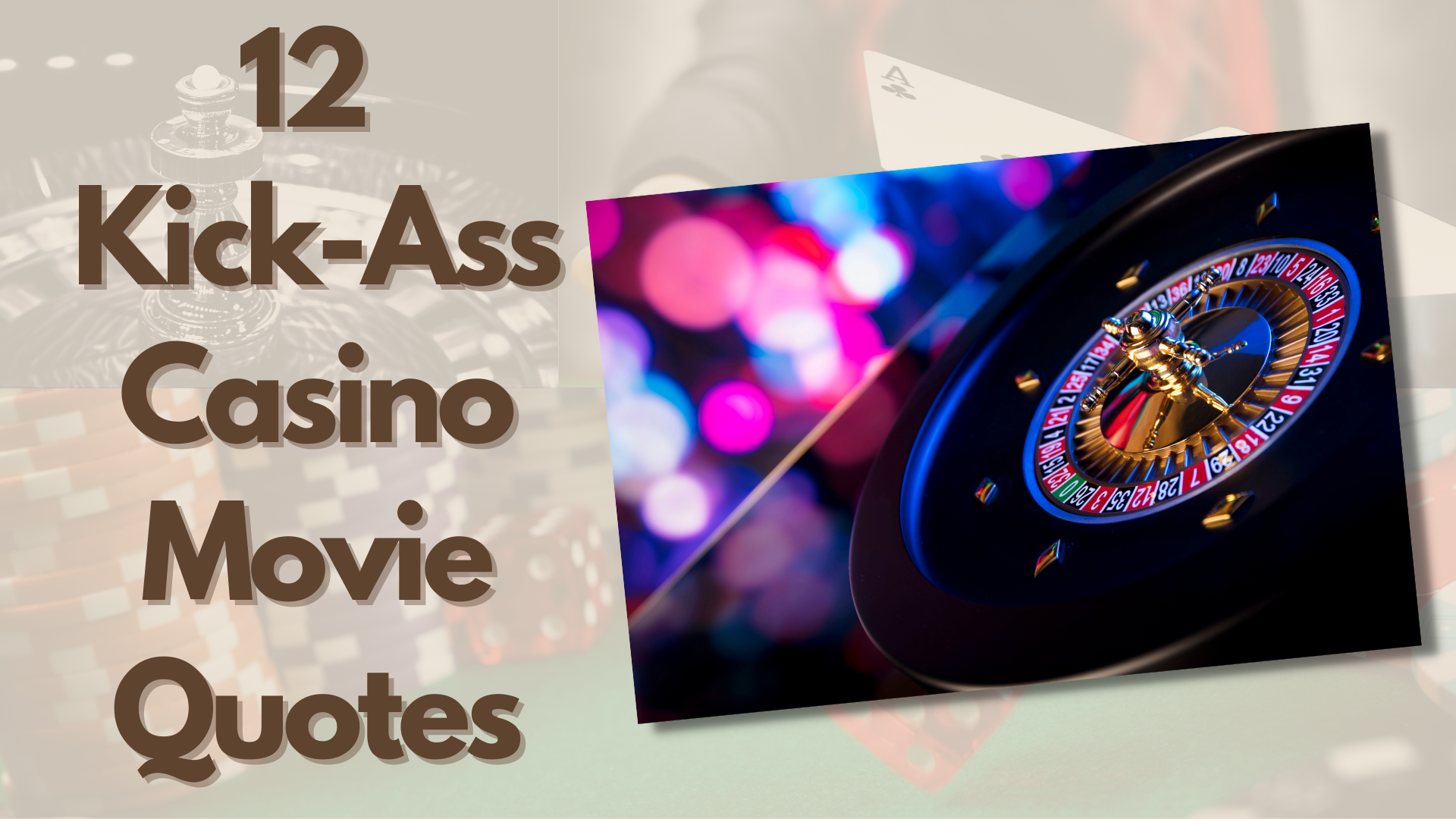 When it comes to casino movies, “Casino” is one of the best. This 1995 American epic crime film was directed by Martin Scorsese and starred Robert De Niro.

The movie follows the rise and fall of Sam “Ace” Rothstein, a casino operator who is based in Las Vegas. Over the years, “Casino” has become known for its great quotes. Here are some of our favorites:

About the movie “Casino”

Directed by Martin Scorsese, “Casino” is a 1995 American epic crime film. The film is based on the nonfiction book Casino: Love and Honor in Las Vegas by Nicholas Pileggi, who also co-wrote the screenplay for the film with Scorsese.

The two previously collaborated on Goodfellas. In “Casino,” De Niro stars as Sam “Ace” Rothstein, a Jewish American top gambling handicapper who is summoned by the Italian Mafia to oversee the operations at the Tangiers Casino in Las Vegas.

Upon his arrival, he meets Ginger McKenna (played by Sharon Stone), a former prostitute who becomes his wife. The film documents Rothstein’s career in Las Vegas and how the Mafia ultimately ousts him from power.

“Casino” was released on November 22, 1995, to mostly positive critical reception. The film grossed over $116 million worldwide and was nominated for multiple awards, including Best Picture.

In the movie, through Ace’s eyes, we see how the Mafia uses Vegas as a playground for their criminal activities and how Ace is caught in the middle of it all.

“Casino” is a masterful film that exposes the dark side of America’s gambling capital, and it is definitely worth watching. But at present, you can enjoy the quotes that we have collected for you:

1. “In Vegas, Everybody’s Gotta Watch Everybody Else.” – Sam Ace Rothstein

In Casino, Ace Rothstein works to create a casino that runs like a well-oiled machine. He believes that procedure and trust are essential to running a successful casino.

Ace’s casino is built on a system of checks and balances, with each person watching the person below them. This system ensures that no one person has too much power and that everyone is held accountable.

This quote reveals Ace’s dedication to his work and his casino. It also shows his keen understanding of how a casino operates.

2. “In the casino, the cardinal rule is to keep them playing and to keep them coming back. the longer they play, the more they lose. Little Miss Sunshine. If you want something, go get it” – Sam Ace Rothstein

This casino movie quote from Sam Ace Rothstein perfectly sums up the casino’s number one priority: making money. And how do they do that? By keeping people gambling for as long as possible.

The casino floor is designed to be a maze so that you never know when you’ll find the exit. They pump oxygen into the air to keep people from feeling sleepy. They provide free drinks so that people will keep gambling even when they’re losing.

In short, the casino does everything it can to keep people gambling and spending money. So next time you’re feeling lucky, remember: the house always wins.

3. “At Night, You Couldn’t See The Desert That Surrounds Las Vegas. But It’s In The Desert Where Lots Of The Town’s Problems Are Solved.” – Sam Ace Rothstein

4. “Back Home, They Would Have Put Me In Jail For What I’m Doing But Out Here, They’re Giving Me Awards.”- Sam Ace Rothstein

This is an interesting perspective from Ace, who is clearly motivated by his work in the casino. While Ace is an outsider in Las Vegas, he ultimately finds a real home in the city of sin, and this quote shows just how liberated he feels by his work for the mafia.

By working in the casino, Ace is able to escape the judgment of his hometown and be recognized for his talents. This casino movie quote highlights the duality of Las Vegas as a city that can both reward and destroy those who seek their fortunes there.

5. “For Guys Like Me, Las Vegas Washes Away Your Sins. It’s Like A Morality Car Wash.”- Sam Ace Rothstein

6. “I had it down so cold that I was given paradise on earth. I was given one of the biggest casinos in Las Vegas to run: The Tangiers, by the only kind of guys that can get you that kind of money. Sixty-two million seven hundred thousand dollars”- Sam Ace Rothstein

7. “She Knew How To Take Care Of People, And That’s What Vegas Is All About. It’s Kickback City.”- Sam Ace Rothstein

From their first meeting, Ace is both impressed and fascinated by Ginger’s skills as a professional con artist. He watches her work the casino floor, using her charms and wit to extract maximum profit from the casino’s wealthy patrons.

In many ways, Ace sees himself in Ginger – they are both master manipulators dedicated to their chosen professions. As their relationship develops, Ace comes to realize that he wants nothing more than to possess Ginger completely.

However, as he soon discovers, trying to control Ginger is an exercise in futility. She is a free spirit, incapable of being tamed or controlled. Ultimately, this is what leads to the downfall of their relationship.

But even in the midst of tragedy and heartbreak, there is still a palpable sense of love and admiration between these two complex characters.

8. “I’m Not Only Legitimate But Running A Casino, And That’s Like Selling People Dreams For Cash.” – Sam Ace Rothstein

9. “They had enough of Nicky. They had enough. I mean, how much more were they gonna take? So, they made an example of him and his brother: they buried them while they were still breathing.”- Sam Ace Rothstein

11. “When You Love Someone, You’ve Gotta Trust Them. There’s No Other Way. You’ve Got To Give Them The Key To Everything That’s Yours. Otherwise, What’s The Point?”- Sam Ace Rothstein

Ace’s early soliloquy about trust and love in Casino reveals much about his character and sets up the tragic events to come. Ace is paranoid about being double-crossed and constantly fears that those closest to him will turn on him.

This fear comes to a head in his relationship with Ginger, who he forced into marriage and who he constantly suspects of cheating on him. While the audience can see that Ginger is not completely innocent, it is clear that she does not deserve the level of suspicion and mistrust that Ace subjects her to.

This ultimately leads to their downfall, as Ace’s obsessive need for control destroys their relationship and puts them both in danger.

12. If you ever come back again, ever, to take her money, next time, bring a pistol. That way, you’ve got a chance.- Sam Ace Rothstein

That’s a wrap! We hope you enjoyed these casino movie quotes. Which one was your favorite? Let us know in the comments below. And if you have any suggestions for future blog posts, let us know that too.

We love hearing from our readers and trying to give you what you want. Thanks for reading, and happy gambling!