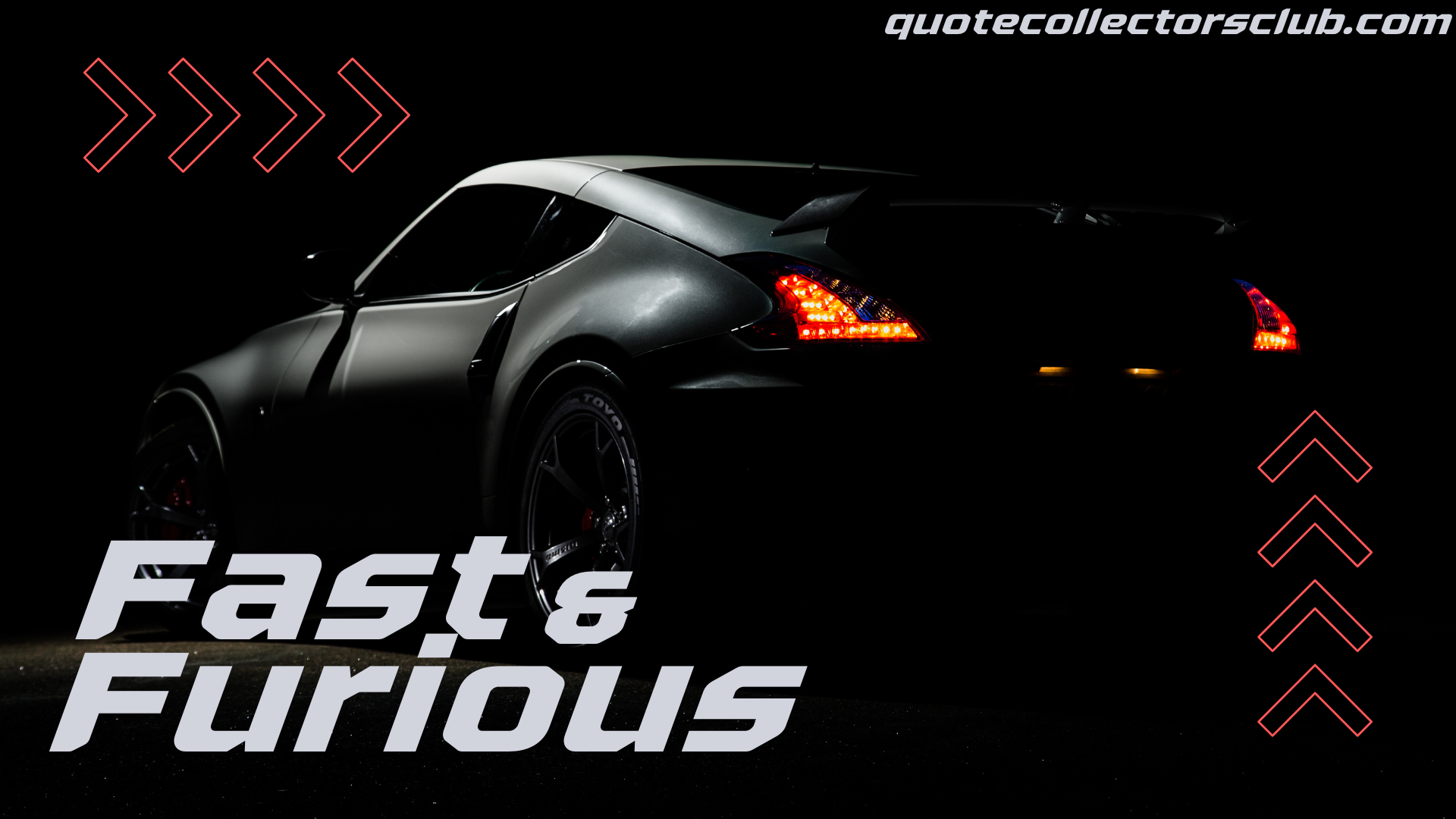 The Fast and Furious film franchise has been thrilling audiences since 2001. The series is known for its fast cars, high-stakes action, and compelling storylines. These films have spawned a loyal following of fans who love to quote their favourite lines from the movies. In this article, we will take a look at some of the best quotes from the Fast and Furious franchise.

About Fast and Furious Movie Series

The “Fast & Furious” franchise began in 2001 with the release of the first movie in the series.

The movie was a critical and commercial success and led to two sequels being released in 2003 and 2006. The movies in the series are largely concerned with street racing, heists, spies, and family.

Here are the best Fast and Furious Quotes

The quote is from the character Dominic Toretto in the movie The Fast and the Furious,

It’s a mantra that he lives by, meaning that he’s always ready to take risks and go on crazy adventures.

For him, life is all about living in the moment and embracing the thrill of the ride. This philosophy has served him well, both in his personal life and in his career as a professional street racer. It’s also something that his friends and family have come to rely on – knowing that no matter what happens, Dominic will be there for them.

The Fast & Furious franchise is all about making choices and living with the consequences. The characters in the movies are constantly making decisions that will have a major impact on their lives, and they have to be prepared to live with the consequences of their actions.

The quote from Han Lue sums up this philosophy perfectly. Life is all about making choices, and once you make a choice, you have to be prepared to live with the consequences. This philosophy is what makes the Fast & Furious franchise so exciting.

The characters are always making choices that could have a major impact on their lives, and we never know what’s going to happen next. It’s this sense of suspense and excitement that keeps us coming back for more.

3. “You Don’t Turn Your Back On Family, Even When They Do.” – Dominic Toretto

The Fast & Furious movie series is all about family. The main character, Dominic Toretto, grew up in a family of criminals, but he always stuck by them – even when they turned their backs on him.  No matter what happens, family is always there for you. They may make mistakes or bad choices, but at the end of the day, they’re still family. And that’s something you can never turn your back on.

4. “Money will come and go. We all know that The most important thing in life will always be the people in this room. Right here, right now.”  – Dominic Toretto

This is a powerful statement that speaks to the importance of relationships and human connection. In a world where so much emphasis is placed on material possessions, it is refreshing to hear someone remind us of what truly matters.

At the end of the day, our memories and experiences are what matter most, not the size of our bank accounts. The people we love and who love us are what makes life valuable and worth living.

5.  “The only thing that matters is who is behind the wheel.” – Dominic Toretto

This mindset has served him well throughout his career as a street racer, and it’s something that we can all learn from. When we’re in control of our own lives, we’re more likely to achieve our goals and reach our full potential.

He must be somebody who is trustworthy and loyal, two qualities that are very important to Dom. Mia knows that her brother wouldn’t let just anyone into his life, so she knows that Brian must be special. This quote also highlights the close relationship between Mia and Dom.

They are obviously very close siblings who care deeply for each other. Mia is proud of her brother and the high standards he sets for those he allows into his life.

The Fast & Furious series is all about going against the grain and doing things your own way. The characters are constantly improvising in order to stay one step ahead of the authorities. In the quote, Brian O’Conner is telling his team that they need to be prepared to improvise in order to achieve their goal.

This is a hallmark of the Fast & Furious series, and it’s what makes the movies so exciting. The characters are always thinking on their feet and coming up with new ways to get out of trouble. It’s this sense of ingenuity and creativity that has made the Fast & Furious franchise so successful.

8. “It doesn’t matter whether you win by an inch or a mile; winning is winning.” – Dominic Toretto

No matter how big or small the victory, it is still a win. This is an attitude that can be applied to many areas of life, whether it is in a race, competition, or even in everyday tasks. By always striving to win, we push ourselves to be our best and reach our goals.

This philosophy can also be applied to situations where we don’t necessarily come out on top. Even if we don’t win, we can learn from our mistakes and try again. With this mindset, we can approach life with confidence and never give up.

9. “You break her heart; I’ll break your neck.” – Dominic Toretto

Dominic Toretto says this to his sister Mia’s boyfriend, Brian, when he first meets him. It’s a clear warning that he will protect his sister at all costs. But it’s also more than that. It’s a statement of how important family is to Dominic. He would do anything for his loved ones, and that includes breaking someone’s neck if they hurt them.

The Fast & Furious franchise is built on the foundation of the family. The characters are all incredibly close, and they would do anything for one another. That’s why the above quote is so significant. It perfectly sums up the relationship between the characters. They’re not just friends; they’re family.

And that bond is unbreakable. No matter what challenges they face, they always have each other’s backs. That’s what makes the Fast & Furious franchise so special. It’s not just about cars or action sequences. It’s about the importance of family and friendship. And that’s something we can all relate to.

11. “I Have Money; It’s Trust And Character I Need Around Me. You Know, Who You Choose To Be Around You Lets You Know Who You Are. One Car In Exchange For Knowing What A Man’s Made Of? That’s A Price I Can Live With.” – Han

This quote means that Twinkie is very confident in his skills and that he could sell anything to anyone. In the movie, Twinkie is a skilled street racer and mechanic who is always able to get his car to perform at its best. He is also known for being a great con artist and salesman. This quote showcases his confidence and skill as a salesman, and it is also a great example of his sense of humour.

The Fast & Furious franchise is one of the most successful action movie franchises in history. With 12 movies released over a period of 17 years, it’s clear that this series has something special that continues to draw audiences back for more.

Whether you’re a fan of fast cars and explosive action or are just looking for some good quotes to put on your Instagram, we hope you enjoyed our look at the Fast & Furious series. If you have any suggestions for similar content, let us know – we love hearing from our readers!