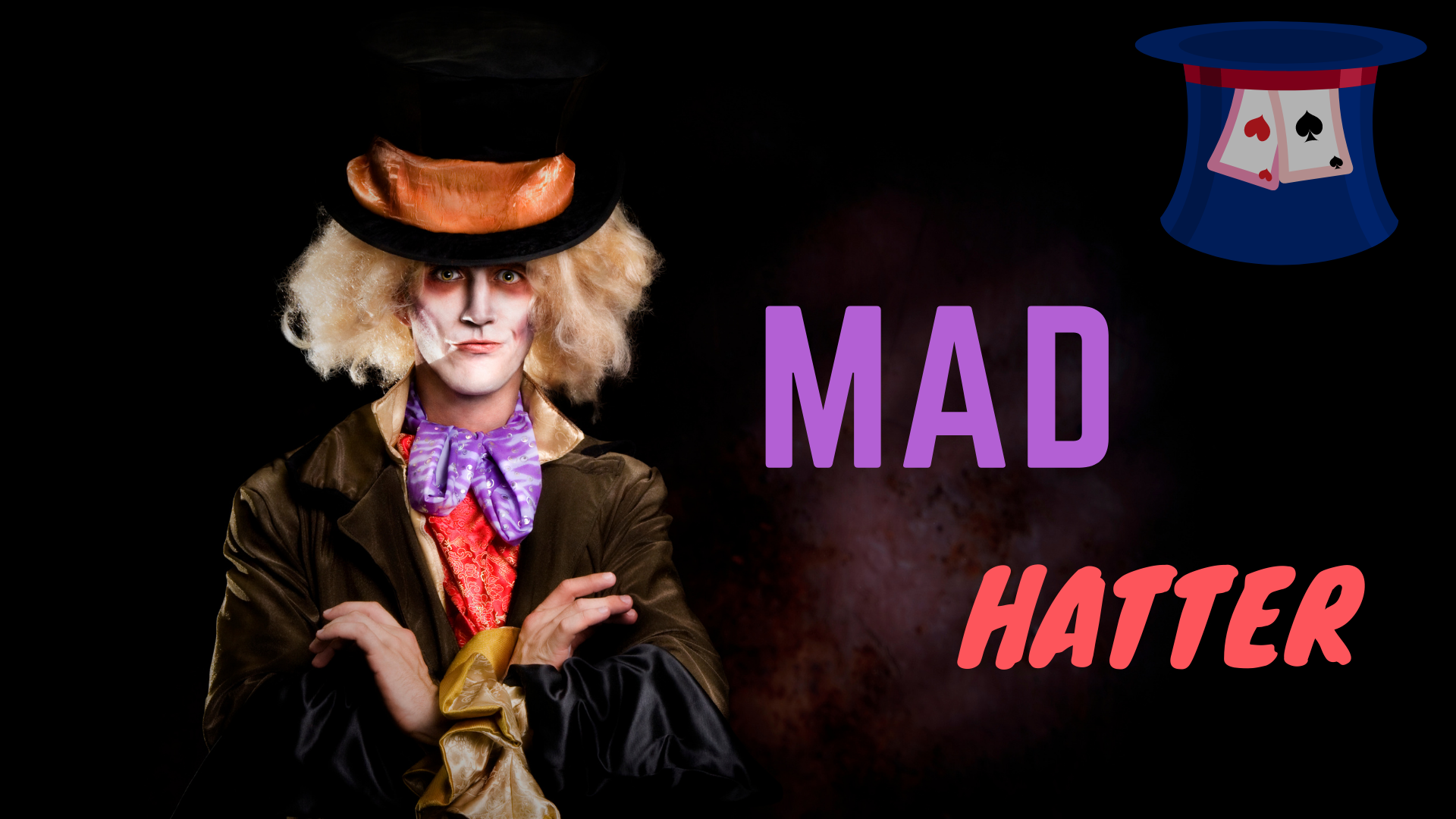 There is no character in Lewis Carroll’s 1865 book Alice’s Adventures in Wonderland and its 1871 sequel Through the Looking-Glass more famous than “The Hatter,” also known as the Mad Hatter. This enigmatic figure is known for his eccentricity and peculiar quotes. In this article, we will list some of our favorite mad hatter quotes!

The Hatter is a fictional character in Lewis Carroll’s book Alice’s Adventures in Wonderland and its sequel. He is also famous as “Mad Hatter,” though this was not originally his name in the books. The Hatter is often considered one of the most recognizable characters from Carroll’s work, along with the March Hare and the Cheshire Cat.

He is notoriously late for appointments and tea parties, for which he is reprimanded by the March Hare. The Hatter also has a fascination with time, and he is always seen wearing a pocket watch. He is capable of performing amazing feats of magic, such as making objects disappear and reappear.

The Hatter is a very eccentric character, but he also channels Alice’s sense of logic and reason in a world that often seems nonsensical. In this way, he serves as an important guide for Alice during her journey through Wonderland.

Despite his eccentricities, The Hatter is shown to be a kind and gentle soul who only wants to help Alice return home. Let’s take a look at some of the best mad hatter quotes:

The Mad Hatter’s words offer a profound insight into the nature of power. To put it simply, those in positions of authority are not necessarily better than anyone else. Instead, they are simply lucky enough to have been born into a position of privilege.

The quote suggests that even a lowly cat has the right to look at a king, implying that everyone is equal in the eyes of the law and that no one is above criticism. While Mad Hatter’s words may seem nonsensical at first glance, they contain a great deal of truth.

2. “There is a place, like no place on earth. A land is full of wonder, mystery, and danger. Some say, to survive it, you need to be as mad as a hatter. Which, luckily, I am.”- Mad Hatter

In the story, Alice steps through a looking glass into a fantastical alternate world. The Mad Hatter and other strange creatures live in this world, and Alice must use her wits to survive. The quote suggests that to understand and survive in this weird place, one must be as “mad” as the hatter.

This means being open-minded, imaginative, and perhaps a little bit crazy. The point is that when faced with the unfamiliar, we must be willing to think outside the box. Only then can we hope to make sense of things and find our way back home.

The Mad Hatter’s famous quote can be interpreted in a few different ways. One interpretation is that everyone is a little bit crazy and that it’s okay to be imperfect. After all, life would be pretty boring if we were all the same.

Embracing our quirks and idiosyncrasies is what makes us unique and interesting. Another interpretation is that the world is a mad place, and it can be hard to keep up with the fast-paced, ever-changing madness around us.

It can be tempting to try to make sense of it all, but sometimes it’s just easier to go with the flow and accept that things are a little bit crazy. Either way, Mad Hatter’s quote is a reminder that it’s okay to be a little bit different – and that being different can be pretty fun.

5. “Well. The entire world is falling to ruins and poor Cheshire’s off his tea.”- Mad Hatter

The Mad Hatter’s quote is a play on words. He is referring to the fact that the world is falling apart and that his friend, Cheshire, is not around to enjoy a cup of tea. The Mad Hatter is known for his playful use of language, and this quote is a perfect example of his wit.

By using the word ‘tea,’ he makes a pun on the fact that Cheshire is ‘off his t’. In other words, he is suggesting that Cheshire is not in his right mind. The Mad Hatter’s quote is a clever way of pointing out the absurdity of the situation. Although the world may be falling apart, there is still time to enjoy a cup of tea with friends.

8. “Twinkle twinkle little bat, how I wonder where you’re at. Up above the world, you fly, like a tea- tray in the sky.”- Mad Hatter

The Mad Hatter’s riddle is a nonsense poem that was first published in 1887 by Lewis Carroll. The poem is about a bat who flies “up above the world, like a tea-tray in the sky.” The bat is described as having a light that twinkles like a star.

The poem asks the question of how the bat can fly so high up in the sky. The answer to the riddle is that the bat is not flying, but rather it is hanging upside down from a tree. The poem is an example of Carroll’s use of word play and nonsensical language.

9. “Egad, you learn something new every day.”– Mad Hatter

11. “Of course. Anyone can go by horse or rail, but the absolute best way to travel is by the hat. Have I made a rhyme?”- Mad Hatter

By saying ‘I hope,’ the Mad Hatter suggests that he is not sure who he is. This is in contrast to Alice, who, despite her many adventures in Wonderland, remains resolute in her own identity. The Mad Hatter’s uncertainly underscores the volatility of Wonderland itself, which is constantly shifting and changing around Alice.

Ultimately, Mad Hatter’s response highlights the theme of perception versus reality that runs throughout the story. Things are not always as they seem in Wonderland, and Mad Hatter’s true nature is just one example of this.

13. “Why is a raven like a writing desk? Have you guessed the riddle yet?”- Mad Hatter

Because you wear a hat?”- Alice

The Mad Hatter is one of the most iconic and best-loved characters from Lewis Carroll’s Alice’s Adventures in Wonderland. In the story, the Hatter is a curiously eccentric fellow who wears a distinctive top hat. He is also known for his unending series of riddles and absurd jokes. So why is he called the Mad Hatter?

There are a few possible explanations. One possibility is that the term “mad” was simply a common way to refer to someone eccentric or unusual in those days. Another possibility is that Mad Hatter’s attire – namely, his oversized top hat – was based on the clothing worn by actual hatters in Victorian England. These hatters often used toxic mercury in their work, which caused neurological damage and physical deformities. This damage sometimes resulted in erratic or irrational behavior – hence the label “mad.”

Whatever the reason for his name, there’s no doubt that the Mad Hatter is one of the most memorable and beloved characters in children’s literature. He continues to charm and entertains readers of all ages more than 150 years after Alice’s Adventures in Wonderland was first published.

Then, you shouldn’t talk.”- Mad Hatter

I’m afraid so. You’re entirely bonkers. But I’ll tell you a secret. All the best people are.”- Alice

The Mad Hatter’s famous quote is often interpreted as meaning that those who are considered “crazy” or “bonkers” are some of the best people. And there may be some truth to that. After all, many of history’s most creative thinkers and geniuses were also considered to be eccentric or even mad.

Think of Leonardo da Vinci, whose groundbreaking inventions and art was fueled by his wild imagination. Or consider Albert Einstein, whose innovative theories overturned centuries of accepted scientific thinking. So while Mad Hatter’s words may not be literal, they do suggest that those who think outside the box may be the ones who change the world.

The Mad Hatter’s famous quote is often used to encourage people to think before they speak. And there is wisdom in that advice. But the Mad Hatter’s quote can also be interpreted in another way. It can be seen as a challenge to those who would rather not think.

After all, if you don’t think, then you can’t talk. And if you can’t talk, then how can you share your ideas with the world? The Mad Hatter’s quote encourages us to use our words to make a difference in the world.

It isn’t mine- Mad Hatter

(The King exclaimed, turning to the jury, who instantly made a memorandum of the fact.)

I keep them to sell- Mad Hatter

(Mad Hatter added as an explanation)

In the quote, the Mad Hatter is telling the King that the hat he is wearing does not belong to him and that he stole it. The King then exclaims that he will make a note of this fact in the jury’s memo. The Mad Hatter then explains that he keeps hats to sell because he is a hatter and does not have any of his own.

This quote is interesting because it shows how Mad Hatter lives up to his name by being a bit of a thief and also because it demonstrates his profession as a hatter. It is also humorous because of the King’s reaction to Mad Hatter’s confession.

Only if you believe it is.”- Mad Hatter

The Mad Hatter’s words offer a profound insight into the power of our beliefs. Too often, we allow our beliefs to limit what we can achieve in life. We tell ourselves that we’re not smart enough, talented enough, or that we don’t have the right connections.

As a result, we give up on our dreams and settle for a life that is far less than what we’re capable of. The Mad Hatter reminds us that our beliefs are just thoughts – they are not reality. And if we want to achieve something that seems impossible, we need to start by changing the way we think. Only then will we be able to see the possibilities that exist beyond our current limitations.

The hatter is a fascinating and enigmatic character, and his quotes are both thought-provoking and humorous. We hope you enjoyed reading them as much as we enjoyed finding them.

If you have any suggestions for additional quotes or if you would like to share your thoughts on the hatter or Lewis Carroll, please let us know.

Thanks for following along!