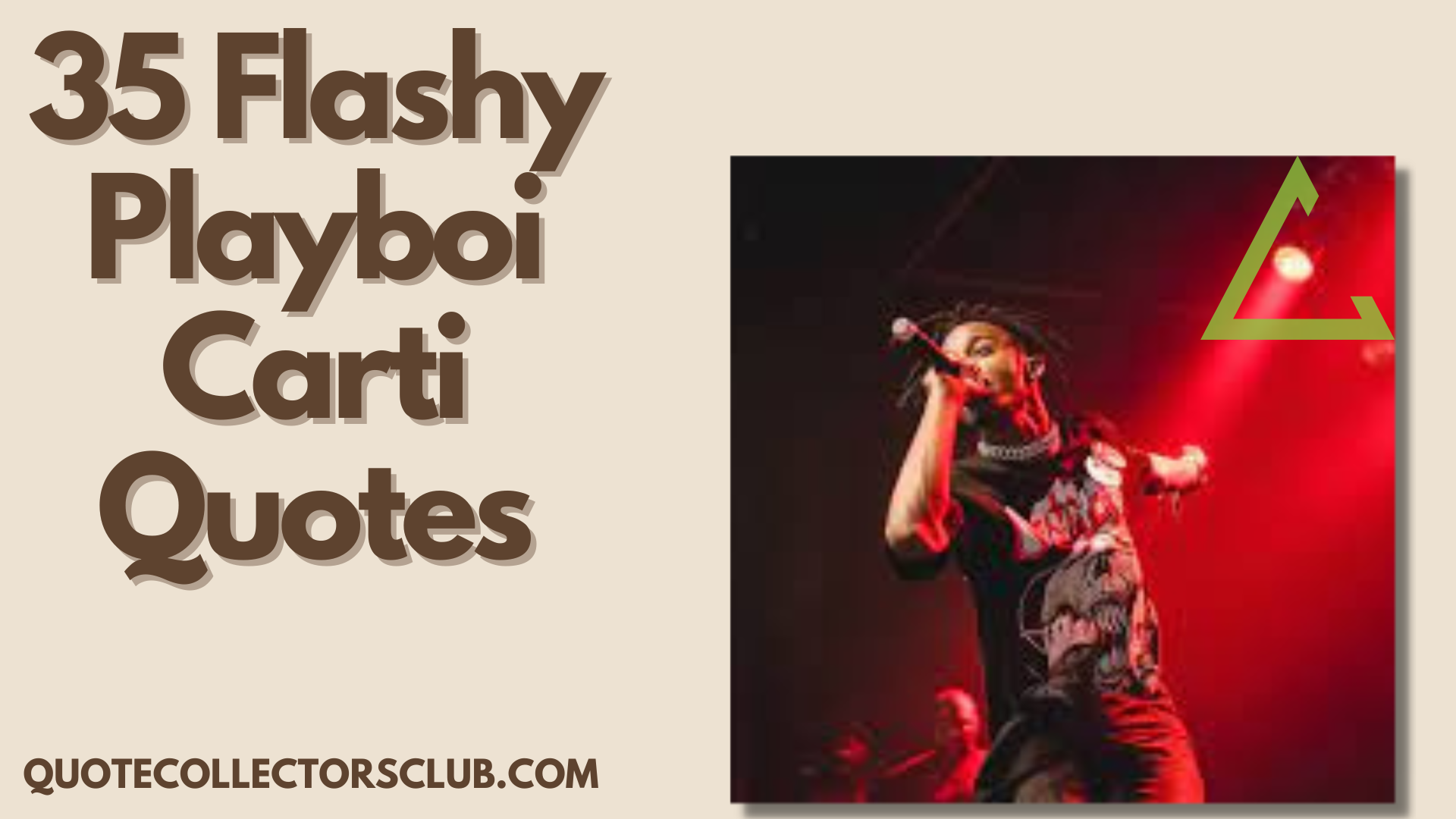 Since bursting onto the scene in 2017, Playboi Carti has been one of the most talked-about rappers. With his unique style and flow, he’s quickly gained a following among hip-hop fans.

In this article, we’ll take a look at some of Playboi Carti’s best quotes. Whether he’s talking about life, love, or music, Playboi Carti always has something interesting to say!

The actual name of Playboi Carti is “Jordan Terrell Carter”, He was born in Riverdale, Georgia. Due to his rebellious nature, he use to get into a lot of trouble during his youth and couldn’t focus on Quality education after high school.

Initially, Carter wanted to become a basketball player but indiscipline and disagreement with the coach turned him towards music.

He used to work in H&M and in his free time he created music, finally, he quit his job as he didn’t want to be known as an upcoming rapper who works in a clothing company.

Carter started to upload his songs on Soundcloud in 2011, In 2014 he joined Awful Records. Carter is said to be a mumble rapper and his music is melodious and at the same time hard-hitting.

Carter has been inspired by Lil Wayne and is also influenced by ASAP Rocky, Jay-Z, and KanyeWest. Let us dive into the quotes and try to understand what the rapper wants to convey:

1. “I’d rather die before I come in last.”-Playboi Carti

This statement, made by rapper Playboi Carti, perfectly encapsulates the competitive spirit that drives many people to succeed. The fear of failure is a powerful motivator, and the desire to be the best often leads people to push themselves harder than they ever thought possible.

Of course, there is always the risk of coming up short, but as Playboi Carti demonstrates, it is better to go for broke than to coast through life in mediocrity. After all, what is the point of living if you’re not going to strive for greatness?

So next time you’re feeling discouraged, remember Carti’s words and go out there and give it your all. You might just surprise yourself with what you’re capable of.

3.  “I want my impact to be legendary ”-Playboi Carti

5. “All you gotta do is have faith.” -Playboi Carti

This phrase, “all you gotta do is have faith,” is not just a saying but it’s a mindset. Having faith doesn’t mean that you’re completely confident and that everything will work out perfectly because that’s not how life works.

Having faith means knowing that despite the challenges and hardships you will face, you have the strength to get through it all. It’s about having hope when things are tough and believing that things will eventually get better.

So often we give up when things get tough because it feels too difficult to continue on. But if we could just have a little faith, if we could just hold onto hope, we would be surprised at what we’re capable of.

The next time you’re feeling lost or overwhelmed, remember this phrase and try to have faith. You might be surprised at what you can achieve.

6. “Some people don’t know how to be alone, but I love it.” -Playboi Carti

It’s no secret that money can change people. When you suddenly have access to a lot of money, it’s easy to get caught up in the material things and forget about the important things in life.

And while there’s nothing wrong with enjoying the finer things in life, it’s important to remember that money doesn’t buy happiness. In fact, as rapper Playboi Carti says, “you start making money people think u worship da devil.”

What he means is that when you start making a lot of money, people tend to be suspicious of your success. They think that you must have made a deal with the devil or that you’re somehow cheating the system. And while there may be some truth to that for some people, it’s not always the case. Sometimes, people just get lucky and find themselves in the right place at the right time.

Whatever the case may be, it’s important to remember that money doesn’t define who you are as a person.

You are more than your bank account balance and material possessions. So don’t let anyone tell you otherwise.

Playboi Carti’s song “Love Me Now” is a call to action for people to appreciate their loved ones while they are still alive. Too often, people wait until someone is gone to tell them how much they loved them.

But as the song says, “love me now, not when I’m dead.” It’s important to express our love and appreciation for others while they are still alive so that they know how we feel.

Otherwise, it’s just a waste of time and we’ll never get the chance to tell them how we really feel. So, the next time you’re thinking about telling someone you love them, do it now. You never know when they might be gone for good.

12. “I got gold money and I bought myself a Aston.” -Playboi Carti

13. “Just dropped a fifty on my jeweler. And told him make sure it’s shiny.” -Playboi Carti

14. “These niggas been mine. But my diamonds keep bitin’.” -Playboi Carti

15. “I guess she not feelin me… not feelin the energy.” -Playboi Carti

Playboi Carti’s hit song “I Guess she not feelin me” is all about the ups and downs of relationships. The high-energy track starts off with Carti trying to figure out why his girl isn’t feeling him anymore.

He goes through a range of emotions, from hurt and confusion to anger and defiance. Ultimately, he decides that he’s not going to give up on her, and he vows to keep fighting for her love.

The song is a celebration of the resilience of the human heart, and it’s sure to get your blood pumping. So if you’re ever feeling down, just remember: “I guess she not feelin me… not feelin the energy.”

16. “All these racks in the bank, yeah, yeah Spent a hundred bands in the mall, don’t care.” -Playboi Carti

18. “Diamonds on me shinin’, look like Fruit Loop.” -Playboi Carti

Playboi Carti is a rapper who is known for his unique style and catchy lyrics. In his song “Got a tch on the line right now,” he talks about how he has a girl on the phone who he is trying to impress.

The song is up-tempo and exciting, and Carti’s flow is very smooth. The lyrics are clever and humorous, and the whole song is just a lot of fun to listen to. If you’re looking for something to enjoy that will put a smile on your face, definitely check out “Got a **tch on the line right now” by Playboi Carti.

21. “Don’t waste your time trying to impress someone who clearly don’t give a f***.” -Playboi Carti

22. “Uh, money on the floor just like some shoes.” -Playboi Carti

No matter what our individual needs are, there’s one thing that we all need in order to experience love: we need someone who is willing to meet those needs. And that’s exactly what Playboi Carti is offering.

In his song, “You know love is what you need..I got exactly what you need,” he promises to be everything that his partner needs. He’s offering passion, security, adventure, and stability–all wrapped up in one package.

So if you’re looking for love, and you’re not sure where to find it, maybe you should give Carti a try. After all, he’s got exactly what you need.

26. “I was the first to wear colored skinny jeans ”-Playboi Carti

27. “Young nigga shoot for fun. Put some money on your head. I sell yo’ a*s for ten.” -Playboi Carti

28. “I know who Michael Jackson is, I know who Prince is, I know the Isley Brothers, all that. Still, I got my own thing going with this music.” -Playboi Carti

29. “All these diamonds in my teeth, I had to smile right now.”-Playboi Carti

For many people, diamonds are a sign of wealth and success. They’re often seen as symbols of luxury and status, and they can be beautiful and eye-catching. But for rapper Playboi Carti, diamonds are also a way to show off his success.

In his song “Smile,” Carti brags about all the diamonds in his teeth, calling them “a sign of success.” And he’s not alone; plenty of other rappers have lyrics about flaunting their diamond-encrusted teeth.

For them, it’s a way to show that they’ve made it – they’re rich and successful, and they’re not afraid to show it off. So when you see someone with a diamond grill, don’t be surprised; they’re just showing off their success.

This line from Playboi Carti’s song ” Magnolia” perfectly encapsulates the rapper’s carefree, luxury-loving lifestyle. While some might see his actions as superficial or materialistic, Carti sees them as a way to show his appreciation for the women in his life.

By giving his “ho” a band and telling her to go buy some shoes, he’s showing that he values her and wants her to enjoy the finer things in life.

This attention to detail and willingness to splurge on those he cares about is what makes Playboi Carti one of the most generous rappers in the game.

Whether it’s taking his friends on vacation or buying them expensive gifts, Carti always knows how to show his loved ones a good time. And judging by the reaction of his “ho” in “Magnolia,” it seems like they appreciate everything he does for them.

35. “My loyalty is something you never have to question, I ride for mine.” -Playboi Carti

When it comes to loyalty, few people are as committed as Playboi Carti. As he himself says, “My loyalty is something you never have to question.”

In other words, once he has pledged himself to someone or something, he will never waiver in his support. This is evident in the way he has ridden for his team throughout his career.

No matter how many challenges or setbacks they face, Playboi Carti always has their back. This unwavering loyalty is one of the things that makes him such a valuable member of any team.

It’s also one of the qualities that makes him a great friend. When you know that someone is as loyal as Playboi Carti, you can always count on them to be there for you, no matter what.

If you’re looking for some motivation, or just want to feel like Carti for a second, take a look at some of his best quotes.

You may not be able to relate to all of them, but they’ll get your blood pumping and make you want to go out and do something awesome. And if nothing else, they’re pretty darn entertaining.