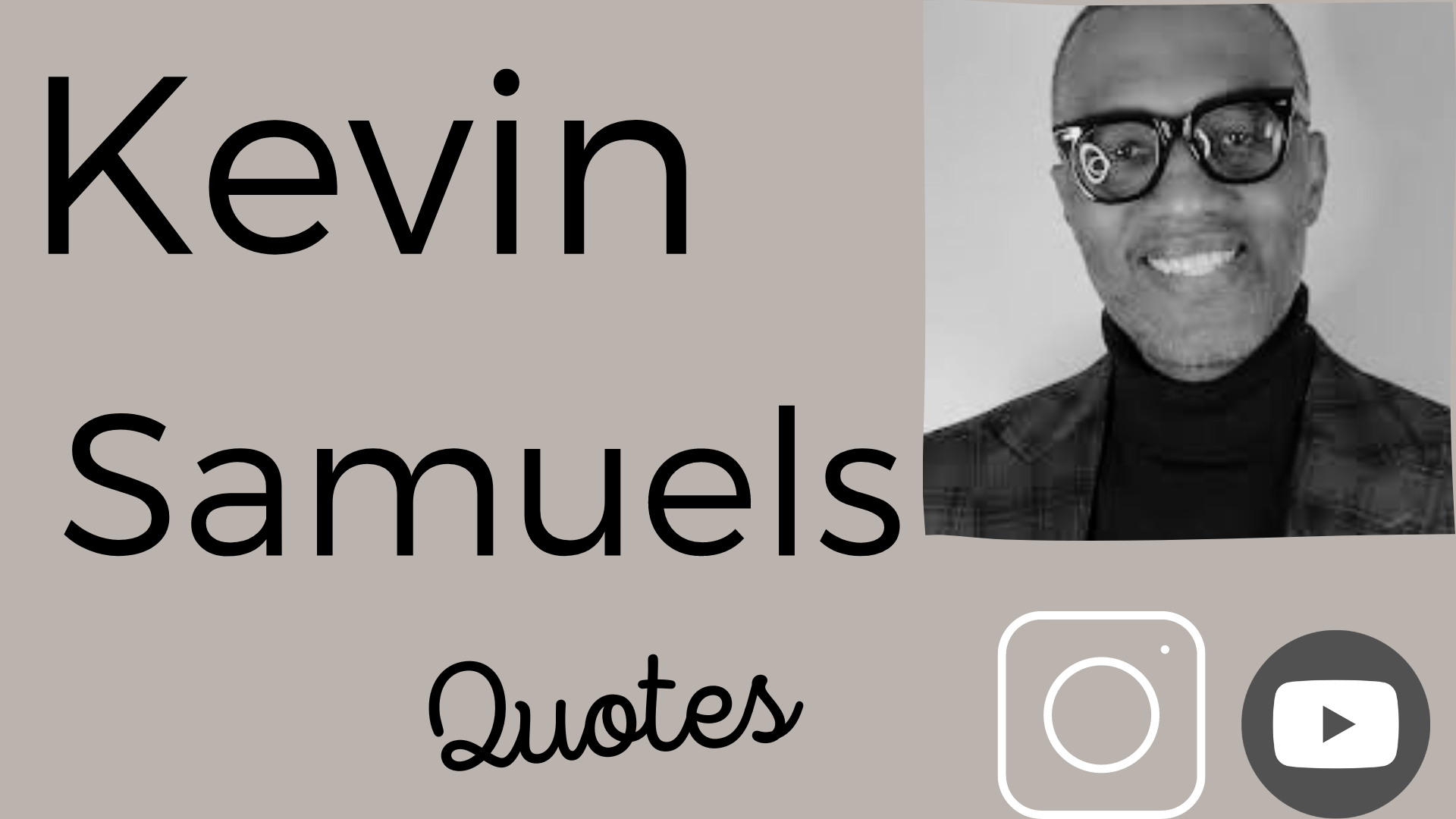 Kevin Samuels was an American internet personality who is known for his quotes. He had amassed a following on social media thanks to his insightful and often humorous quotes about life & women. Here are 15 of our favorites!

Kevin Roshon Samuels was born on March 13, 1969, in Oklahoma City; Although he was studying chemical engineering at the University of Oklahoma, cancer forced him to drop out at age 21.

He garnered a lot of attention in 2020 for his live streams on YouTube and Instagram, where he talked about modern society and relationships. Some people loved him, while others thought he was controversial.

Samuels, who worked in marketing prior to starting his own image-consulting firm in 2013, had amassed 1.4 million YouTube subscribers and 1.2 million Instagram followers, as well as thousands more on Twitter and TikTok.

His sexist remarks on men and women often resulted in public controversy. As an image consultant, he would ask female callers requesting dating advice to rate their attractiveness according to the sexual market value for dating. He would then critique women based solely on their dress size, height, or weight, judging from his personal perception of their sexual market value.

Samuels was divorced twice and had one daughter. On May 5, 2022, Samuels’ body was found in his Atlanta apartment.

Kevin’s videos were wildly popular among his many fans, thanks in part to their high production value and effortless charm. But what really set him apart was his down-to-earth energy and vibrant personality.

1. “If a woman decides to go on a date with any man after the hours of 5 p.m., intimacy should be on the menu. However, if the intention of the woman is to keep the relationship with the man ‘strictly platonic,’ the time frame of noon to 3 p.m. is more suitable.” – Kevin Samuels

There is no denying that Kevin Samuels was a well-known figure in the internet age, with his frank and humorous opinions on everything from dating to social norms. In particular, Samuels was known for offering advice to men and women on navigating the often tricky waters of romance.

One of his most famous quotes on this topic came down to an issue of timing. According to Samuels, whether a woman decides to pursue a romantic relationship with a man or simply keep things platonic is largely determined by the time of day.

According to Samuels, if intimacy is desired, a woman should wait until after 5 pm before asking a man out on a date or initiating physical contact. He believed that this timeframe gave both partners enough time in the day to unwind and relax before engaging in more intimate activities.

However, if a woman simply wanted to have a friendly conversation or enjoy other company without sexual undertones, noon or afternoon hours were preferable. This would allow both partners to conduct business as usual without feeling pressured or uncomfortable around each other.

Whether you agree with Samuels’ take on romance, it’s hard to deny that timing certainly plays an important role in any relationship. And while some may scoff at the idea that an afternoon meeting could somehow turn romantic over the course of just a few hours, there’s no doubt that we can all relate in some way to his famed quote about timing and relationships. After all, for better or for worse, timing often does seem to make all the difference when it comes to love and intimacy!

2. “If you have made it to 35 and you are unmarried, you are a leftover woman. You are what is left. Men know that there is likely something wrong with you. When you were between the ages of 22 and 25, and you didn’t want to settle, you were trying to get the CEO, the pilot, the investment banker, you were trying to get flewed out.”- Kevin Samuels

3. “You act on what you know and how you know how to do things, that’s why I would never begrudge my ex-wives.”- Kevin Samuels

4. “Ladies understand something when a man asks you out on a date he’s asking to have sex! If you don’t wanna have sex with him don’t go on a date with him.”- Kevin Samuels

Samuels explains that when a man asks you out on a date, he is essentially asking to have sex with you. While this may shock some, those who understand the harsh realities of dating can appreciate the practicality behind Samuels’s argument.

If you’re not interested in having sex with your date, then it’s obviously best not to go on said date in the first place. This kind of no-nonsense approach to dating is both refreshing and undeniably sensible – just ask anyone looking for love online!

5. “Fashion and style have always been passions of mine for as long as I can remember. And a background in professional sales as well as in advertising and marketing was real world training for just how important your appearance is your success.”- Kevin Samuels

6. “What percentage of men in this country make six figures or more? … It’s 10% , So the question is, what do these men, who make money, who all women tend to want, what do they want?” – Kevin Samuels

7. “We have gotten to the point that for the most part we don’t known how to relate to each other. We know how to swipe left, swipe right, hook up and get on.”- Kevin Samuels

8. “The first thing I tell guys I coach is that we have to get brutally honest about where you are and where you want to get to. Understand how far that is and put in the work.”- Kevin Samuels

There is no substitute for hard work to succeed in life. This philosophy was famously espoused by the late internet personality Kevin Samuels, whose simple yet insightful quotes have inspired countless people around the world. In his quote, Samuels emphasizes the importance of ruthlessly honest self-reflection and the willingness to work hard to achieve your goals.

At first glance, this may seem daunting and discouraging. However, when you break his advice down into its constituent parts, it actually becomes empowering. Whether you are setting out to attain professional success, improve your relationships, or cultivate more personal growth and fulfillment in your life, having an accurate understanding of where you currently stand is crucial.

With this knowledge in hand, you can begin charting a path toward your desired destination and taking the necessary steps along the way – each step challenging you to become a better and more authentic version of yourself.

9. “I need you to get fit, feminine, friendly, cooperative, and submissive in order to find a man.”- Kevin Samuels

10. “The first thing I tell guys I coach is that we have to get brutally honest about where you are and where you want to get to. Understand how far that is and put in the work”- Kevin Samuels

11. “I’m not telling you you can’t do a damn thing. You can act however you want to act and you get the outcomes you get.”- Kevin Samuels

12. “Ladies, you wonder why your men steps out and exercises his options? Because you ain’t meeting his needs.”- Kevin Samuels

13. “Women for the last 30 to 40 years have been told they can have it all whenever they want, no matter how they are. And they’ve been given an unrealistic expectation of their actual sexual marketplace value.”- Kevin Samuels

14. “I don’t care about your pride. You can’t be proud and broke at the same time.”- Kevin Samuels

Those struggling financially often cite pride as a reason they haven’t achieved success yet. They may believe that coming to terms with their poverty will diminish their self-worth or bring shame to their families. But as Samuels so poignantly points out, such worries are not only misguided, but they also get in the way of making real progress toward achieving one’s goals.

Success requires acknowledging our faults and failings, but it also demands that we summon up the courage to work through our challenges and overcome them.

In order to break free from the cycle of poverty, it’s time to put your pride aside and focus all your energy on taking concrete steps toward reaching your goals. Only then will you be able to finally say that you’re proud – not just of what you’ve accomplished but of how far you’ve come in your journey to achieve financial stability and success.

Samuels was an enigma, and his death shocked the world. He was a true original and will be missed by many. His quotes show us that life is too short to waste time on things that don’t matter. We should all live our lives to the fullest and enjoy every moment.