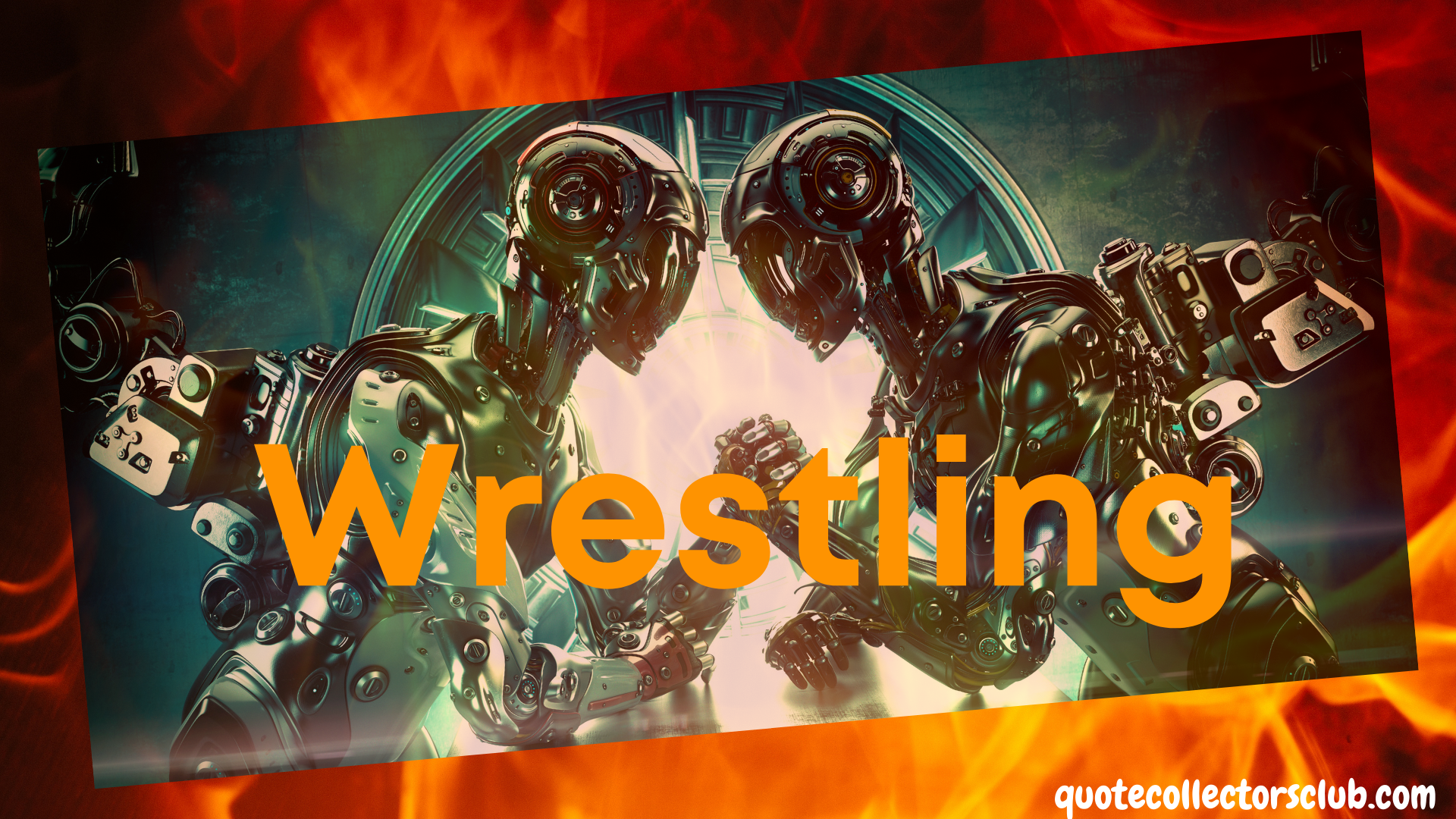 “Wrestling is the oldest sport in the world. The first wrestling match ever recorded was in 708 BC.”

Wrestling is an ancient sport that has been around for centuries. It is a physical and mental battle between two opponents, and it takes a lot of skill and toughness to be successful. In this article, we will take a look at some of the best wrestling quotes of all time.

These quotes come from wrestling legends who have achieved greatness in the sport. They offer words of wisdom and motivation that can inspire anyone who is looking to become a champion wrestler!

Wrestling is a sport with a long and storied history. It is said to be one of the oldest forms of combat, and it has been featured in art and literature for centuries. Today, wrestling remains a popular sport around the world, with competitions taking place at all levels, from local clubs to the Olympic Games.

Wrestling is an invigorating and physically demanding sport that tests the strength, skill, and stamina of its participants. The object of the sport is to throw, takedown, or pin one’s opponent, and there are a variety of techniques that can be used to achieve this.

A match is typically contested between two opponents, but there are also team formats in which teams of wrestlers compete against each other. Whether played as an individual or team sport, wrestling is an exciting way to test one’s strength and skill.

Here are the best Wrestling Quotes

Freestyle, Greco-Roman, judo, sambo, folkstyle, catch, submission, sumo, pehlwani, and Shuai jiao are just a few of the many styles of wrestling. Let’s take a look at what some of the greatest wrestling minds have had to say about this unique sport.

1. “Once you’ve wrestled, everything else in life is easy.” – Dan Gable

One of the most famous quotes about wrestling comes from Dan Gable, one of the greatest wrestlers of all time. In his words, “Once you’ve wrestled, everything else in life is easy.” And it’s true – wrestling is one of the most challenging sports out there. It requires strength, coordination, endurance, and mental toughness.

It’s a sport where one mistake can cost you the match and where split-second decisions can mean the difference between victory and defeat. That’s why wrestlers are some of the most successful people in the world – because they’ve learned how to overcome adversity and persevere through tough situations.

When you’ve mastered the art of wrestling, everything else in life seems a lot easier by comparison.

2. “Life is like a wrestling match: a lot of times, things are looking good, and then something happens, and you’re fighting from underneath.” – Matt Hardy

3. “No matter what kind of wrestler, everyone is afraid of getting tired.” – Jay Robinson

Anyone who has ever wrestled knows that it is a sport that requires immense physical and mental strength. The above quote by Dan Gable perfectly sums up what it takes to be a successful wrestler. In the first period, the focus is on technique.

The wrestler who has mastered the most moves and can execute them with precision will usually come out on top. However, in the second period, the wrestler who is in the best shape will often take control. As the match wears on and both wrestlers start to tire, the one with the greater endurance will have the advantage.

Finally, in the third period, it is often the wrestler with the biggest heart who prevails. This is because wrestling is as much about mental toughness as it is about physical strength. Any wrestler who wants to be successful must learn to push through pain and fatigue in order to achieve victory.

5.  “My advice to young wrestlers is that your surroundings really make a difference. You want to put yourself in good, positive surroundings.” – Dan Gable

6. “When you’re wrestling with life and, or yourself and getting the beat down, don’t forget to tag God in!” – Sanjo Jendayi

Wrestling is one of the oldest and most universal sports in existence. It is a sport that is steeped in tradition and one that has been passed down through generations. In many ways, wrestling is a metaphor for life itself. There are ups and downs, triumphs and defeats.

7. “Wrestling will be around forever. It’s been around thousands of years. It’s going to be around till the end of time.” – Mark Schultz

8. “Wrestling teaches you nothing comes easy. Nothing in life comes easy, so you have to work at it.” – Mike Sullivan

9. “Gold medals aren’t really made of gold. They’re made of sweat, determination, and a hard-to-find alloy called guts.” – Dan Gable

10. “There are no losers in wrestling, only winners and learners.”

In wrestling, there are no losers, only winners and learners. This is because wrestling is a sport that requires intense physical and mental training. There are no shortcuts to success in wrestling; it takes years of hard work to become a champion. However, even the best wrestlers make mistakes.

The key to success in wrestling is to learn from your mistakes and keep improving. This is why wrestling is such a great sport; it teaches you how to be a better person both physically and mentally. Wrestling instills discipline, determination, and perseverance in its participants. It is these qualities that make wrestlers allies, not enemies.

12. “Wrestling begins at the end of your comfort zone.”

There’s nothing quite like the feeling of stepping out onto the mat, knowing that everything you’ve worked for over the past months (or years) is about to pay off. That feeling of excitement quickly turns to nerves as you size up your opponent, knowing that they’re every bit as determined as you are to come out on top.

And then the match begins, and all those nerves vanish as you focus on the task at hand. Every move, every counter, every second that ticks by is bringing you closer to either victory or defeat. There’s no room for complacency or self-doubt when you’re in the heat of battle.

It’s about digging deep and finding that extra reserve of strength when you need it most. It’s about never giving up, even when all odds are against you. This is what it means to be a wrestler.

13. “Wrestling is a universal language. The moves, the facial expressions, most people understand.” – Shinsuke Nakamura

14. “Wrestling is overcoming obstacles. Every drop of sweat, every black eye, and every mile run reinforce that the will to train sets winners apart.”

15. “The art of living is more like wrestling than dancing.” – Marcus Aurelius

To many people, the art of living may seem like an endless series of dances. We move from one situation to the next, always trying to stay in step with the music. But as the philosopher Marcus Aurelius reminds us, life is more like wrestling than dancing.

Just as wrestlers must be constantly aware of their opponent’s movements, we must always be on guard against the unexpected challenges and obstacles that life throws our way.

And just as wrestlers must use effort and skill to maintain their balance, so must we constantly strive to maintain our own equilibrium, despite the chaotic forces that surround us. By understanding that life is more like wrestling than dancing, we can better prepare ourselves for the challenges that lie ahead.

16.  “In wrestling, there’s a shelf life, and some wrestlers don’t pay attention to the shelf life.” – Dwayne Johnson

17. “If Shakespeare was alive today, he would be writing wrestling shows.” – Chris Jericho

18. “No activity I know is more of a confidence builder and at the same time more ‘humility training’ than wrestling.” – Jim Leach

In wrestling, as in life, there are ups and downs. One day you may be on top of the world, and the next, you may be eating dirt. The key is to learn from both your victories and your defeats. With each bout, you learn a little more about yourself and what it takes to be successful.

Over time, you develop the confidence to know that you can handle whatever life throws your way. At the same time, wrestling teaches humility. No matter how good you become, there will always be someone who is better than you.

Wrestling humbles you and reminds you that there is always room for improvement. For these reasons, wrestling is an excellent activity for building confidence and teaching humility.

19. “Wrestling and sports entertainment are not about the moves; it really isn’t. It’s about being able to evoke emotion in one facet or another.” – The Undertaker

20. “A lot of my intensity in wrestling was due to my mental preparation before the matches. I got myself into a different world.” – Dan Gable

21.  “It’s a little like wrestling a gorilla. You don’t quit when you’re tired―you quit when the gorilla is tired.” – Robert Strauss

The point is that it’s important to keep going even when you’re tired because, eventually, your opponent will also tire. For example, if you’re studying for a difficult exam, you might feel like giving up when you hit a wall of fatigue.

However, if you keep going, you’ll likely find that the fatigue lifts, and you start making progress again. In other words, the key is to persevere even when the going gets tough.

22. “Professional wrestling is a beautiful yet cruel mistress. She will treat you well and treat you horribly, but outside of my family, it is my one true love.” – Luke Harper

As any wrestler knows, the sport is about more than just physical strength. It requires discipline, mental toughness, and a willingness to face pain and failure. These are lessons that can be applied to all aspects of life, and that is why wrestling is such an important sport.

24. “When I wrestled, I always considered myself an athlete and a wrestler.” – Rocky Johnson

Above all else, wrestling is an art form. Two bodies come together and tell a story through their movements, their expressions, and their physicality. When done well, it can be a thing of beauty.

Unfortunately, in recent years wrestling has become more about entertainment and spectacle than artistry. This quote is a call to return to the roots of the sport, to focus on creating exciting and memorable matches rather than simply putting on a show.

If wrestling can recapture that magic, it will once again be one of the most captivating forms of entertainment in the world.

26.  “Wrestling is the only sport I’ve ever competed in that puts you totally in a situation of constant motion without breaks. I could play football or baseball, swim—but there’s always some kind of situation that would break my thoughts, break my concentration.” – Dan Gable

Wrestling is an intense and physically demanding sport. It takes a lot of strength, stamina, and skill to be successful in wrestling. These 26 quotes about wrestling will give you a better understanding of what it takes to be a wrestler and the passion that drives these athletes.

We hope you enjoyed this collection of quotes. If you have any suggestions for future posts, let us know!