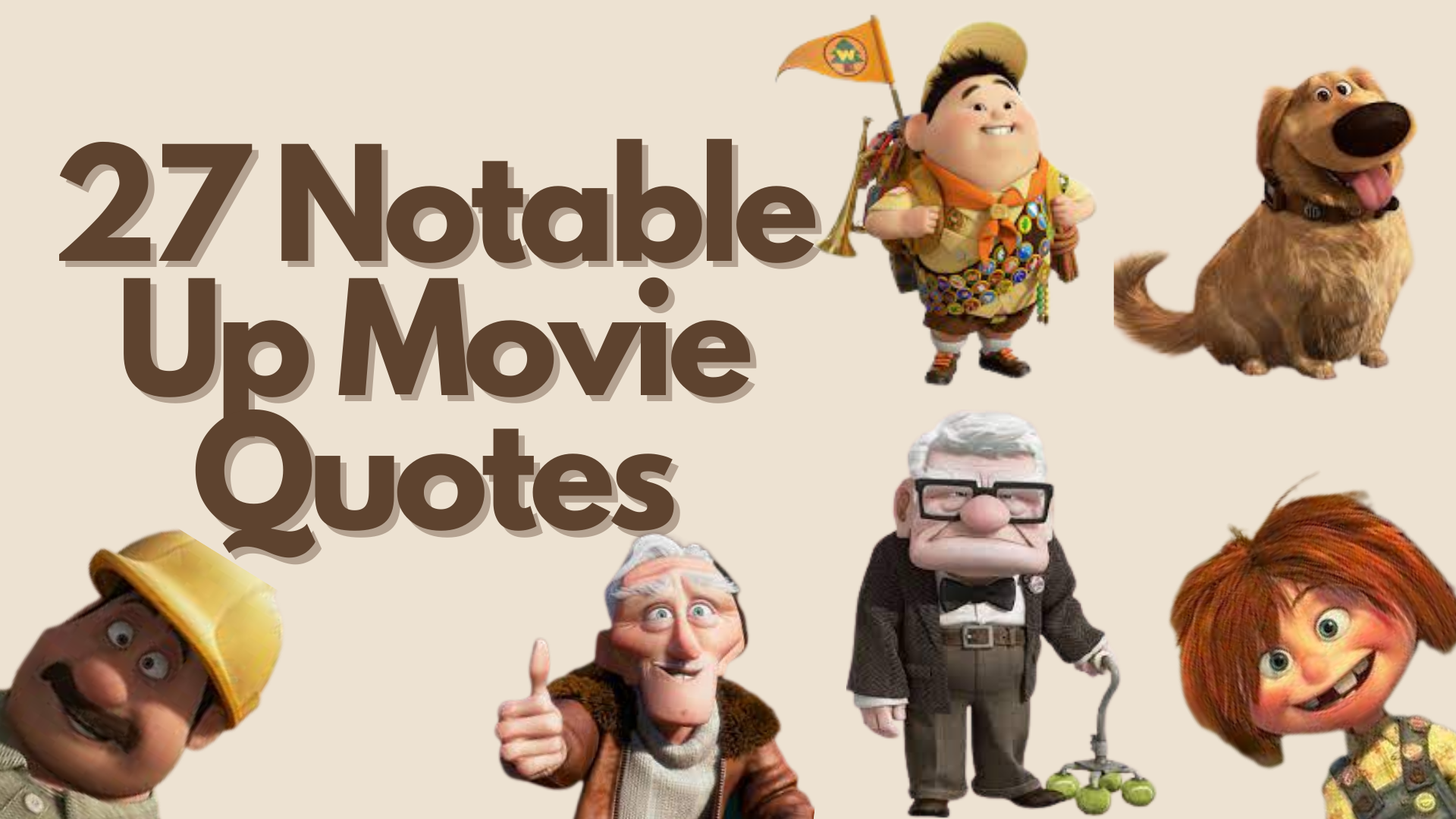 In 2009, the animated movie “Up” was released and quickly became a classic. The story of an old man named Carl who goes on an adventure with a young boy named Russell is heartwarming and inspiring. The quotes from this movie are just as memorable as the film itself.

About the Movie “UP”

By tying thousands of balloons to his house, Carl sets out to fulfill his lifelong dream to see the wilds of South America and complete a promise made to his late wife Ellie. The film was directed by Pete Docter, co-directed by Bob Peterson, and produced by Jonas Rivera.

“Up” was released on May 29, 2009, and grossed over $730 million worldwide. The film received critical acclaim, with most praise going to its visuals, voice acting, direction, musical score, and themes about growing old.

Up was nominated for five awards at the 82nd Academy Awards, including Best Picture, making it the first animated film since 1991’s Beauty and the Beast to receive such a nomination, and won two: Best Original Score and Best Animated Feature.

Here are some of the most memorable Up Movie Quotes

One of the best characters in the movie is Dug, a talking dog who is always enthusiastic and optimistic. One of the favorite lines from Dug is when he says, “I like you temporarily!” It’s a great example of his positive outlook on life, and it always makes one smile.

Whenever you are feeling down, Think of Dug’s line, and it can immediately cheer you up. It’s a great reminder that even if things aren’t going well at the moment, they can always get better.

One of the things that Russell says in the movie really resonates. He’s talking about his Wilderness Explorer badges, and he says, “See these?

This scene is so powerful because it conveys Russell’s respect for the elderly, even though he doesn’t yet have experience caring for them. It’s a quality that we aspire to have, and it’s something that we think we should all strive for.

We should all try to be a little more like Russell and show Respect For Our Elders.

4. “Don’t you know this is an exclusive club? Only explorers get in here. Not just any kid off the street with a helmet and a pair of goggles. Do you think you got what it takes? Well, do you?” — Ellie

In Up, Ellie is an explorer who dreams of going on grand adventures. When she meets Carl, a young boy who also loves to explore, she invites him to join her club. However, Carl is quickly discouraged when he learns that he doesn’t seem to measure up to Ellie’s standards.

Ellie believes that only true explorers are worthy of being in her club, and she is unwilling to let just anyone in. However, Carl eventually proves himself to be a brave and determined explorer, and Ellie realizes that he is precisely the kind of person she has been looking for all along.

One of the highlights of the film is when Carl and Russell meet Dug, a talking dog who has been fitted with a collar that allows him to speak.

Dug is eager to please and very enthusiastic, and it’s not long before he has won over both Carl and Russell.

7. “You know Carl, these people who come here, they all tell pretty good stories. A surveyor making a map, a botanist cataloging plants, an old man taking his house to Paradise Falls. And that’s the best one yet. I can’t wait to hear how it ends.” — Charles Muntz

It’s an exciting scene in the movie where Carl finally meets Charles Muntz. Muntz is such an interesting character—he’s a bit of a mad scientist, but he’s also obviously very intelligent and passionate about his work.

I loved hearing his take on the other “explorers” who have come to Paradise Falls. It’s clear that he respects their stories, even if he doesn’t necessarily believe them.

And, of course, we were eager to find out how Carl’s story would end.

8. “I promise to capture the beast alive. And I will not come back until I do!” — Charles Muntz

“There are no Tigers in South America. Zoology.”— Russell

10. “That might sound boring, but I think the boring stuff is the stuff I remember the most.” — Russell

I think this is so true! It’s easy to remember the exciting moments in life, but it’s the day-to-day stuff that really shapes who we are.

The little things we do (or don’t do) each day add up to create our character and our destiny. So next time you’re tempted to skip doing something because it seems boring, think of Russell and Up and remember that even the boring stuff is worth doing.

It might not be exciting, but it’s important nonetheless.

11. “Hey, I know a joke! A squirrel walks up to a tree and says, ‘I forgot to store acorns for the winter, and now I am dead.’ Ha! It is funny because the squirrel gets dead!” — Dug

At first, Carl is ecstatic to finally meet his hero. He’s been dreaming of this moment for years. But then Charles tries to kill them both, and Carl realizes that he’s been duped.

He’s heartbroken and angry, but he manages to find the strength to continue on with his journey.

14. “Adventure is out there” – Charles Muntz

The movie is full of excitement, adventure, and comedy, and it really speaks to the importance of living life to the fullest. Charles Muntz, the main antagonist of the film, is a perfect example of this.

He’s an explorer who’s spent his entire life searching for a rare bird, and he’s absolutely obsessed with finding it. His dedication to his passion is inspiring, and it really drives home the message that adventure is out there waiting for us all.

So next time you’re feeling stuck in a rut, just remember: adventure is out there. All you have to do is go find it.

Up is one of the most heartwarming and memorable Pixar movies. Throughout the film, the main character, Carl Fredericksen, goes on an amazing journey with a young boy named Russell and a talking dog named Dug.

One of the standout scenes is when Dug first meets Carl and immediately falls in love with him. In an effort to prove his loyalty and affection, Dug ends up hiding under Carl’s porch.

When Carl finally discovers Dug, he is initially angry but eventually warms up to him. This scene perfectly captures the movie’s themes of friendship and family. Up is a truly magical film that will stay with you long after the credits have rolled.

18. “Look, why don’t we play a game I know? Whoever is quietest for the longest time wins.”— Carl

One scene that always makes us laugh is when Carl and Russell are trying to play the “quiet game.”

They both get so excited that they can’t help but make noise, and it’s hilarious to watch. It’s a great example of how even simple games can be fun when you’re with people you love.

20. “Any last words Fredricksen? Come on, spit it out! (Carl spits out his dentures)”

Charles Muntz confronts Carl and demands to know if he has any last words. In response, Carl simply spits out his dentures.

This scene is so memorable because it perfectly captures Carl’s character. He’s a grumpy old man who doesn’t take kindly to being bossed around.

22. “The wilderness must be explored!” — Russell

Russell repeatedly talks about his dream of going on an adventure in the wilderness, and his excitement is palpable. It’s clear that he sees the wilderness as a place of beauty and wonder, and he knows that there are infinite possibilities for new discoveries.

By the end of the movie, Russell has finally gotten his wish, and his experience in the wilderness has been everything he hoped for.

Russell teaches Carl that it’s never too late to explore the world and have exciting adventures. With this newfound perspective, Carl sets off into the wilds of South America, making new friends and memories along the way.

Dug is one extremely excited dog who is always ready for adventure. In the movie, Dug’s pack sends him on a special mission to find a bird.

And find a bird he does- thanks to his amazing tracking skills. From start to finish, Dug’s enthusiasm is palpable as he follows the bird’s scent until he finally catches up to it.

It’s clear that Dug loves nothing more than using his tracking skills to help his pack- and he does it all with a wagging tail and a big smile on his face.

Throughout the film, Carl is constantly telling Russell to stay back and let him handle things, but Russell is always eager to help.

In one poignant scene, Carl shouts at Russell, telling him that he doesn’t want his help; he just wants him to be safe. It’s a powerful moment that speaks to the importance of family and friends.

27. A wilderness explorer is a friend to all, be a plant or fish or tiny mole!”— Russell

(offended) “Yeah it does.”— Russell

He’s always keen to help out and make new friends, as evidenced by his interactions with Carl Fredricksen. Even when Carl is grumpy and doesn’t want anything to do with him, Russell persists in being friendly until he eventually wins him over.

We hope you’ve enjoyed our compilation of “Up movie” quotes. What is your favorite quote?

What is your favorite? Let us know in the comments section below. And be sure to check out our other blog posts for more great content.