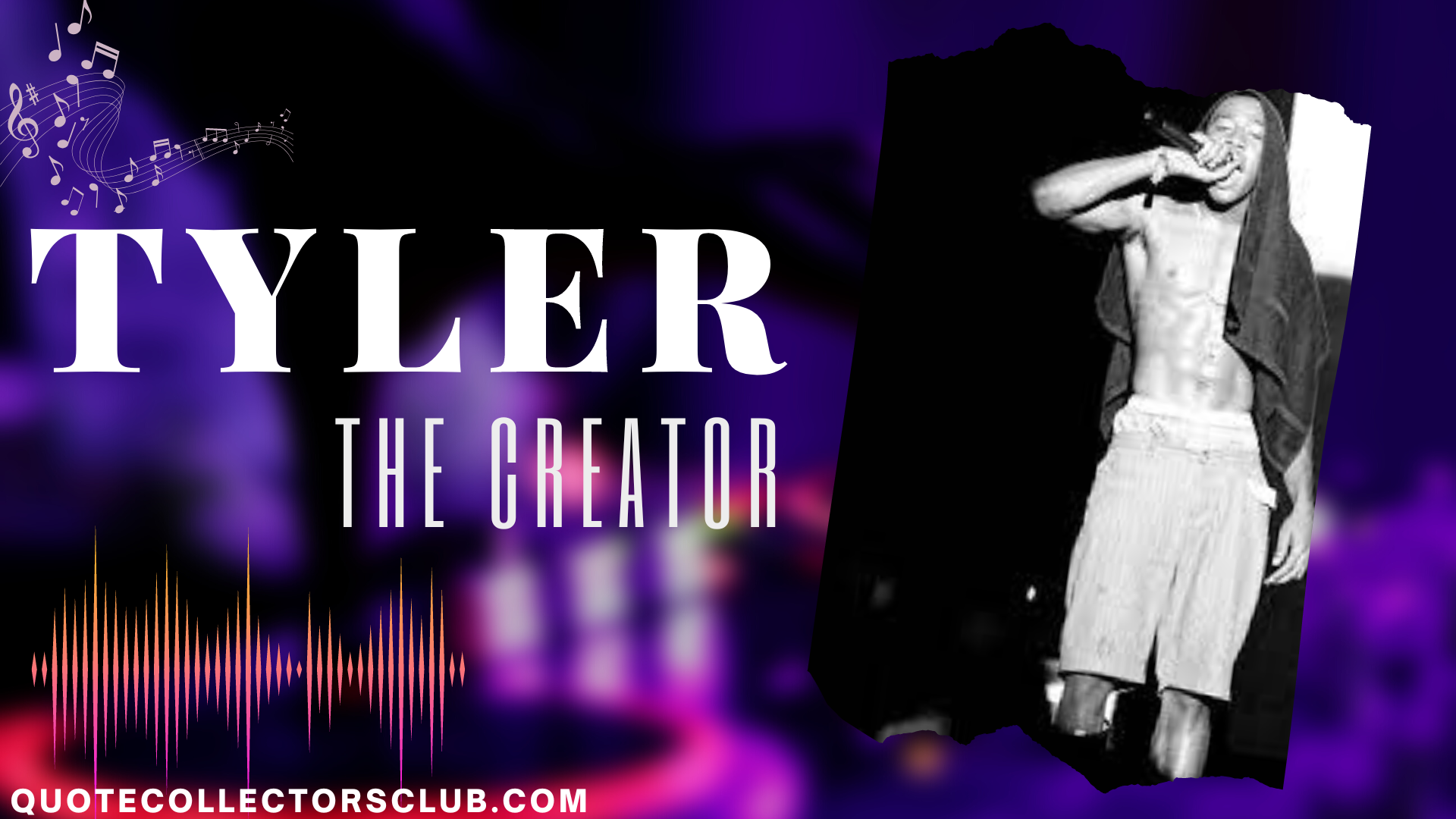 The American rapper and record producer is known for his brutally honest lyrics and off-the-wall sense of humor. He’s never afraid to speak his mind, and his quotes are a testament to that. In this article, we’ll be rounding up some of Tyler’s best quotes. Trust us – you won’t want to miss them!

About Tyler the Creator

Tyler, the Creator is an American rapper and record producer who rose to prominence in the early 2010s with his controversial debut album, Goblin. His follow-up album, Wolf, was even more successful, reaching number three on the Billboard 200.

Tyler’s music is often characterized by its dark and bizarre subject matter, and his songs have been known to touch on topics like mental illness, suicide, and drug use. While his lyrics can be shocking and offensive, there’s no denying that Tyler is a talented artist with a unique vision.

In addition to his work as a rapper, Tyler is also a successful fashion designer, having launched his own clothing line called Odd Future in 2011. He has since ventured into other businesses, including directing music videos and creating cartoons.

Tyler, the Creator is a true multi-hyphenate talent, and there’s no telling what he’ll do next.

Here are the best Tyler the Creator Quotes

Do You know? Okonma chose his stage name from a Myspace page where he displayed his creative work. Let’s find out some interesting Tyler, the Creator Quotes.

To some, growing up may seem like the natural and inevitable next step in life. But for others, the thought of becoming an adult can be daunting and even unappealing. This seems to be the case for Tyler, the Creator, who has said that he never wants to grow up.

And it’s not hard to see why–adulthood often comes with responsibilities and stresses that can feel suffocating. It can be difficult to hold down a job, pay bills, and keep up with all of life’s demands.

As a result, it’s understandable why someone would want to stay young forever. There’s something to be said for living in the moment and enjoying the carefree days of youth. So while growing up may be inevitable, that doesn’t mean we have to lose our sense of wonder and joy along the way.

3. “For the record, I don’t worship the Devil. I just hate religion.”– Tyler, the Creator

Tyler, the Creator is known for his controversial lyrics and edgy persona. In this quote, he addresses one of the main criticisms leveled against him: that he is a Satanist. Tyler clarifies that he does not worship the Devil but simply hates religion.

This hatred stems from Tyler’s personal experiences with religion. He was raised as a Christian but grew to resent the hypocrisy and judgmental attitude of many Christians. In particular, Tyler speaks out against the homophobia of some Christians and their belief that gay people are going to Hell.

For Tyler, religion is a source of pain and oppression rather than solace and comfort. As such, it is no wonder that he has such strong feelings against it.

4. “Youth is something I never wanna take for granted. I just want to smile and live life.”– Tyler, the Creator

5. “I’m not a follower. I’m a leader. And anyone who speaks their mind is always criticized.”– Tyler, the Creator

The quote by Tyler, the Creator is very relatable to many people. Anyone who speaks their mind is always criticized. It could be for expressing a different view or simply for being themselves. This can be discouraging, but it’s important to remember that not everyone will agree with you, and that’s okay.

What matters is that you stay true to yourself. Leaders are not born; they are made. While some people are born with qualities that make them naturally inclined to lead, anyone can become a leader with the right attitude and mindset. Leaders are confident and unafraid to stand up for what they believe in, even if it means going against the grain.

6. “I want the cheesy dates at the movies, the stupid walks at the beach, and sharing straws in a cup.”– Tyler, the Creator

7. “People are more obsessed with the idea of failing than the idea of succeeding.”– Tyler, the Creator

Tyler, the Creator is absolutely right – people are way more obsessed with the idea of failing than succeeding. And it’s not just because failing is easier or more fun. It’s because we’re programmed to think that way.

From a young age, we’re taught to be cautious and to play it safe. We’re told that it’s better to stay within our comfort zones and that taking risks is a surefire way to end up in failure. As a result, we become afraid of failure, and our obsession with avoiding it only grows stronger.

Meanwhile, our dreams of succeeding become nothing more than distant memories. It’s time to break free from this negative thinking pattern and start chasing our goals.

8. “Do something productive; stay the f*ck off of Snapchat.”– Tyler, the Creator

9. “I want to make as much money as I possibly can so that when my day comes, my mother and sister are fine. My close friends are fine. They don’t have to worry about anything ever again.”– Tyler, the Creator

It’s no secret that money can provide a greater degree of security and peace of mind. And for Tyler, the Creator, becoming financially successful is about more than just achieving personal wealth. It’s about taking care of the people who matter most to him.

By ensuring that his loved ones are “fine,” Tyler can rest assured, knowing that they won’t have to worry about money ever again. It’s a touching sentiment and one that underscores the importance of financial security.

10. “Miscommunication is the number one cause of all problems. Communication is your bridge to other people. Without it, there’s nothing. So when it’s damaged, you have to solve all these problems it creates.”– Tyler, the Creator

Tyler, the Creator’s quote, is all about self-expression and acceptance. He just wants everyone to be their own awesome selves and not worry about conforming to anyone else’s standards. It’s a really inspiring message that encourages people to be confident in themselves and their own unique coolness.

It’s also a great reminder that we should all try to be accepting of others, even if they don’t fit into our usual ideas of what is “cool.” After all, the more diversity and individuality in the world, the more awesome it becomes.

13. “Humans have voids, and you need things to fill voids. I didn’t have a dad to fill that male model void, so when I heard Eminem or freaking seen Dave Chappelle, that’s what I gravitated to.”– Tyler, the Creator

When it comes to making music, Tyler, the Creator, is all about making people happy. In fact, that’s one of his key motivators. He doesn’t want to make people around him unhappy; he wants to make them happy. And that’s why his music is so joyful and upbeat. It’s all about spreading positivity and good vibes.

15. “I like my raps, but I’m never too happy with some of ’em because I feel like they could be better.”– Tyler, the Creator

Tyler, the Creator is a rapper and record producer with a unique voice in the music industry. His 15 quotes provide insight into his creative process, personal life, and views on the world around him.

We hope you enjoyed this collection of Tyler’s thoughts and that they provided some inspiration or amusement. If you have any suggestions for other artists to include in future blog posts, let us know!