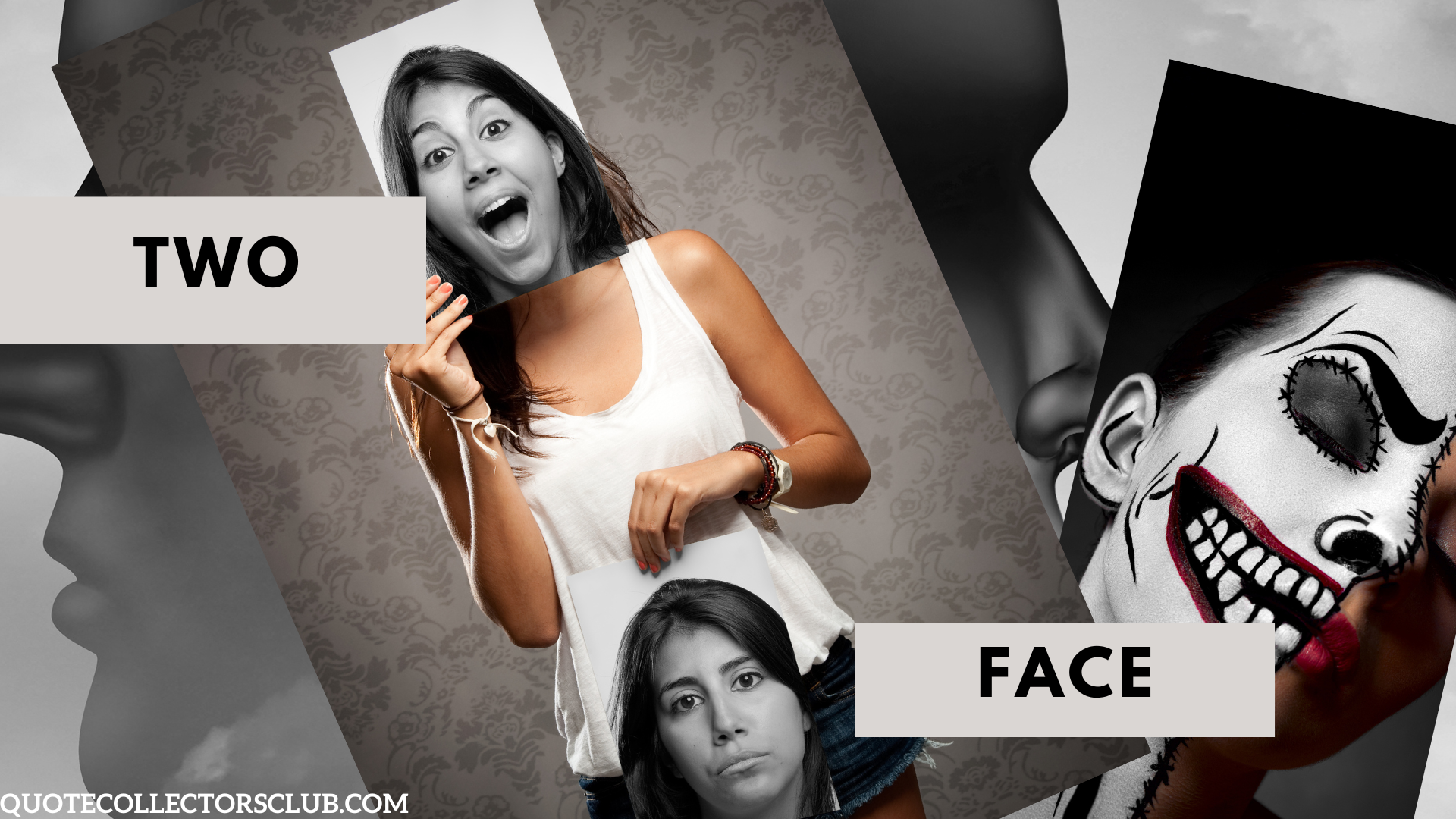 “You can’t trust anyone” is a phrase that is uttered often, and for good reason. People can be two-faced, which means they can act one way when they are around certain people, and completely different around others.

They may even act differently when they are by themselves. This type of behavior is often called “double-dealing.” Here are some quotes about two-faced people that perfectly describe the situation.

There are few things more frustrating than dealing with a two-faced person. On the surface, they may seem like a perfectly charming and affable individual. However, behind your back, they’re quick to spread gossip and talk.

This type of person is often highly skilled at manipulation, and they can use their charms to take advantage of others. If you find yourself in a situation with a two-faced person, it’s important to be careful.

Don’t let yourself be drawn in by their facade; instead, try to get to know them better and see what their true intentions are. If you can’t trust them, it’s best to keep your distance. Dealing with a two-faced person can be challenging, but it’s important to remember that not everyone is as honest as they seem.

Remember! Two-faced people will always be around, but that doesn’t mean you have to let them bring you down. Let’s take a look at some two-faced people quotes that will help you deal with these kinds of individuals.

Two-faced people are notoriously hard to trust. Their true intentions are always in question, as they often say one thing and do another. This quote compares two-faced people to pennies – which are similarly two-sided and thus not particularly valuable.

In other words, two-faced people are not worth our time or energy. We are better off surrounding ourselves with those who are honest and authentic, even if their intentions are not always pure. At least with these types of people, we know where we stand.

2. “Being nice to the people you don’t like isn’t called two-faced; it’s called growing up.”

3. “I think I need glasses. Everywhere I look, people are two-faced.”

4. “Everyone has two faces, but often we see only one side of them, so never judge anyone by their looks.”

On the surface, two-faced people may seem trustworthy and kind. They may have a warm smile and a pleasant demeanor. But what you can’t see is that they are often two-faced.

They may say one thing to your face and then say something completely different behind your back. two-faced people are often two-timers as well. They may be attracted to two different people and play them both. If you’re not careful, two-faced people can take advantage of you.

So, the next time you meet someone, don’t just take them at face value. Get to know them better before you judge them. You may be surprised by what you find.

5. “I think when two people get together, their past is their past. Their reputations are reputations. You can only take someone the way you find them… on face value.”

Two-faced people are everywhere. They’re the colleagues who praise you to your face and then talk about you behind your back. They’re the friends who act as if they care about you, but only when it’s convenient for them.

They’re the family members who claim to love you but are always quick to point out your flaws. In a world full of two-faced people, it’s important to remember the words of Chief Joseph: “Look twice at a two-faced man.” When someone is two-faced, they’re not to be trusted.

They’re slick and manipulative, and they’re always looking for an opportunity to take advantage of you. So if you come across someone who’s two-faced, be wary of them. And always remember to look twice.

7. “I’d rather deal with thick-faced people rather than wasting time with two-faced ones.”

9. “God has given you one face, and you make yourself another.” ― William Shakespeare

How often do we meet someone and think to ourselves, “What a two-faced person!” It seems that in everyday life, we are constantly encountering people who say one thing but do another.

We see it in our co-workers, our friends, and even our family members. It’s as if they have two completely different faces – one that they show to the world and one that they keep hidden away.

Shakespeare said that we make ourselves into two-faced people. It’s not that we are born that way, but rather that we allow ourselves to be molded by our environment and the people around us. We learn to put up a front, to pretend that everything is okay when it’s not.

We tell lies and make promises that we know we can’t keep. We put on a brave face for the world, even when we’re falling apart inside.

Maybe it’s time that we all take a look in the mirror and ask ourselves whether we are being true to ourselves. Are we living our lives according to our values and beliefs, or are we constantly trying to please others?

10. “Remember, there are two sides to every story. Kinda like your face!”

11. “The greatest way to live with honor in this world is to be what we pretend to be.” ― Socrates

How many people do you know who are two-faced? You might be thinking of that colleague who is super nice to your face but talks behind your back. Or maybe it’s a friend who pretended to be interested in your hobbies but always found an excuse not to join you.

We’ve all met two-faced people in our lives, and they’re never fun to be around. But what if I told you that we’re all two-faced? Socrates once said, “The greatest way to live with honor in this world is to be what we pretend to be.”

In other words, we all put on a facade to some degree. We act like we’re interested in someone when we’re not. We pretend to be something we’re not. The list goes on. But why do we do this? It might be because we’re afraid of being rejected or judged by others.

Or maybe we just want to fit in. Whatever the reason, it’s important to remember that two-faced people are everywhere – even if you don’t realize it. So the next time you meet someone who seems two-faced, try to see beyond their facade and look for the real person beneath it; you might be surprised by what you find.

12. “People who are two-faced, usually forget which mask they are wearing at some point in their life.” ― Anthony T.Hincks

13. “Two-faced; It’s the latest trend, and everyone seems to be in style.”

This quote is so powerful because it speaks to the true nature of two-faced people. They are never genuinely interested in you or your life; they only care about what you can do for them.

They use flattery and manipulation to get what they want from you, then talk behind your back to further their agenda. These types of people are often difficult to spot, but it’s important to be aware of them. Two-faced people can be poisonous to your mental and emotional wellbeing, so it’s best to steer clear of them altogether.

16. “The reason there are so few female politicians is that it is too much trouble to put makeup on two faces.” – Maureen Murphy

17. “If you’re gonna be two-faced, at least make one of them pretty.” ― Marilyn Monroe

Two-faced people are the worst kind of people. They pretend to be your friend, but they’re just waiting for an opportunity to stab you in the back. They say one thing to your face and another behind your back.

They make you feel like you’re the only one in the world, and then they turn around and gossip about you to everyone else.

It’s hard to decide which face to slap first because they’re both so infuriating. two faced people quotes If you ever have the misfortune of meeting someone like this, just walk away and never look back. You’re better off without them.

19. “I try and be just completely me on stage. I try and put that across, and people seem to get that personality that I have, so I do try not to become two different people and two different faces.”

20. “We have two kinds of morality side by side: one which we preach but do not practice and another which we practice but seldom preach.” ― Bertrand Russell

Have you ever stopped to think about how two-faced some people can be? On the one hand, they’ll preach about how important it is to be honest and kind. But in practice, they’re dishonest and unkind.

Or they’ll lecture others about the importance of being punctual. Yet, in reality, they’re always late. It’s as if they have two separate sets of morals: one that they talk about but don’t follow, and another that they follow but don’t talk about.

As Bertrand Russell so astutely observed, “We have two kinds of morality side by side: one which we preach but do not practice and another which we practice but seldom preach.” Why is this? Maybe it’s because it’s easier to talk the talk than it is to walk the walk.

Or maybe it’s because we like to think of ourselves as better than we are. Whatever the reason, it’s a hypocritical way to live. And it’s something we should all strive to change.

21. “Never trust someone easily. You’ll never know they may be two-faced quickly.”

22. “I hate people who are two-faced; if you don’t like me, then stop pretending as you do.”

23. “When people are two-faced, the only thing you’ll know for sure is that you can’t trust either of them.”

Have you ever met someone who seems friendly and helpful at first, only to find out later that they were just using you for their gain? Or maybe you’ve had a friend who was kind and supportive to your face but gossiped about you behind your back.

These two-faced people are impossible to trust because you never know which side of them you’re going to get. As the quote reminds us,  It’s better to steer clear of these phony people and surround yourself with those who are honest and authentic.

24. “It’s great how two-faced people come in groups! They’re stabbing each other in the back and are too ignorant to know it.”

Why does everyone have to be so two-faced? It’s like they’re always putting on a show, pretending to be something they’re not. Maybe they’re afraid of being judged, or maybe they just want to fit in.

But whatever the reason, it’s exhausting. We all are tired of trying to keep up with all the two-faced people in our lives. We just want to be ourselves, and we wish everyone else would too.

We hope you enjoyed these 25 quotes about two-faced people. People can be deceiving and manipulative, but it’s important to remember that we all have a dual nature.

What matters is which side of our personality we choose to act on more often. So the next time you meet someone who seems a little too good to be true, remember that they probably are. And don’t forget the wise words of these famous authors and thinkers!