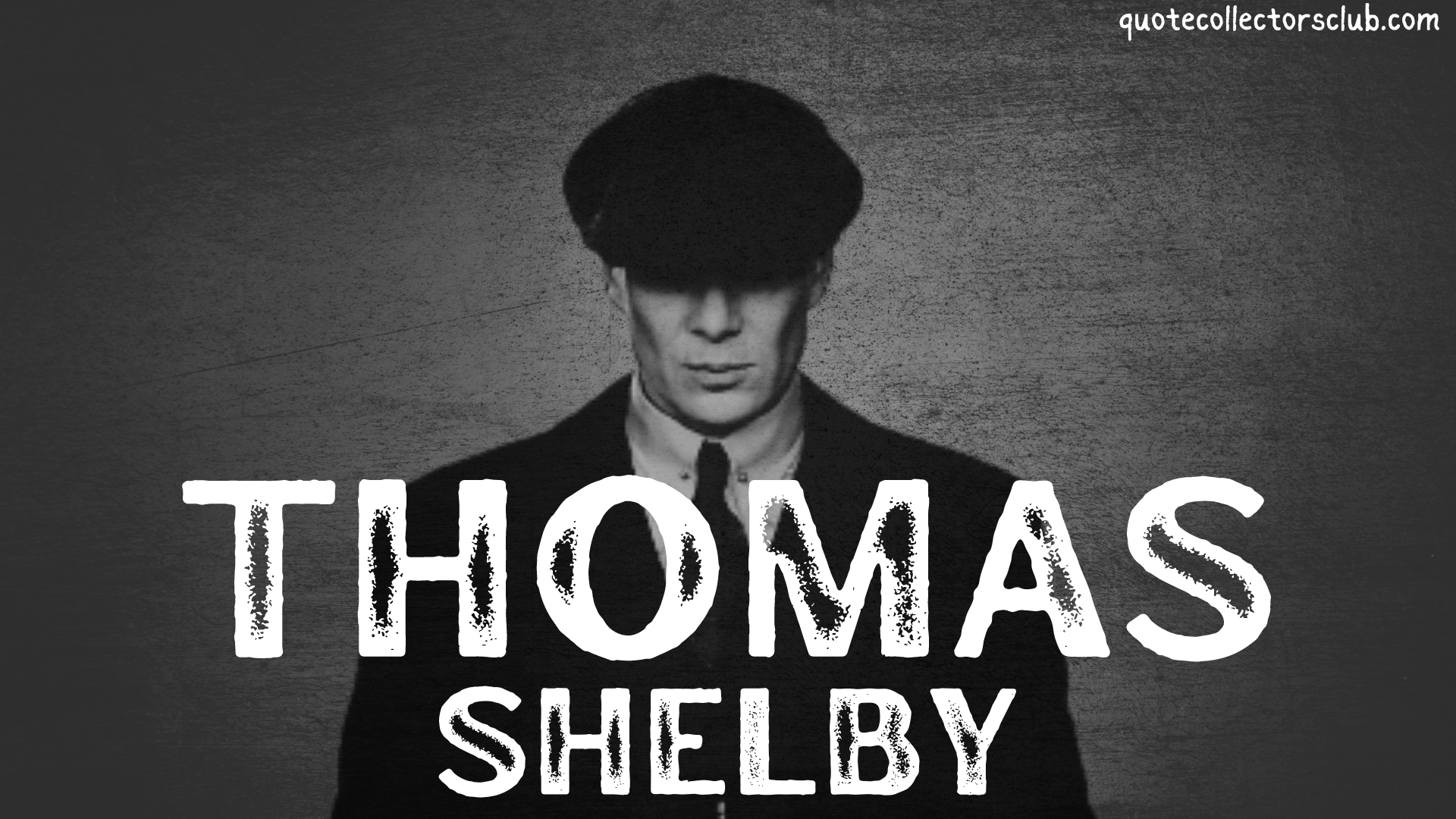 If you’re a fan of the British period crime drama “Peaky Blinders,” then you know just how badass the show’s main protagonist, Thomas Shelby, can be. He’s a man who knows his own mind and isn’t afraid to speak it, no matter who he’s talking to.

In this article, we’ll list some of our favorite Thomas Shelby quotes from the show. So sit back, relax, and enjoy!

Thomas Shelby is the dapper, manipulative, and ambitious leader of the Peaky Blinders, a notorious gang based in Birmingham, England. Though he’s not above getting his hands dirty (or bloody), Thomas prefers to use his brain rather than his brawn to get what he wants. He’s a natural-born leader with a quick wit and sharp tongue, which often gets him into trouble.

But many of Thomas’ enemies have underestimated him, only to find out the hard way that he’s not to be trifled with. Thomas is fiercely loyal to his family and friends, and he’ll stop at nothing to protect them. He’s also got a soft spot for animals, particularly horses. So if you’re looking for a cunning crime boss with a heart of gold, Then your search ends on Thomas Shelby.

The character has been played by the popular Irish actor Cillian Murphy, And for playing this role, Murphy has received significant acclaim, winning the Irish Film & Television Academy’s 2018 Best Actor in a Lead Role in Drama award. Let’s  take a look at some of the best quotes by Thomas Shelby:

1. “Everyone’s a wh*re, Grace. We just sell different parts of ourselves.”- Thomas Shelby

2. “In pubs, sometimes people say things, and sometimes it’s the whisky talking. It’s hard to tell which is which.”- Thomas Shelby

We’ve all been there. It’s early evening, you’ve had a few drinks, and you start to loosen up. The inhibitions vanish, the self-consciousness fades away, and suddenly you find yourself saying things you would never dream of saying sober.

And then, the next morning, you wake up with a throbbing head and a sinking feeling in your stomach as you realize exactly what you said (or did) the night before. You can only hope that nobody was sober enough to remember.

As Thomas Shelby so rightly says, it’s hard to tell which is which sometimes – is it the person talking or the whisky? Whichever it is, we’ve all been there…and we’ve all regretted it the next day. Cheers!

It’s a funny old world, isn’t it? You can tell a lie and have it halfway around the world before the truth has had a chance to get its pants on. That’s because lies are easy. All you have to do is make something up.

The truth, on the other hand, can be complicated and messy. It takes time and effort to ferret out the facts and put them in order. No wonder lies travel faster than the truth.

In these days of instant communication, all it takes is a tweet or a post to send a lie hurtling around the globe while the truth is still getting its ducks in a row.

Anyone who’s been a teenager knows that rebellion is a powerful thing. It can be something as small as staying out past curfew or as large as running away from home. But no matter what form it takes, rebellion is usually met with resistance from authority figures.

In the quote, Thomas Shelby is saying that if you’re too lenient with rebel behavior, it will only get worse. This is because rebels are constantly pushing boundaries and testing limits.

If they’re not met with any opposition, they’ll continue to push further and further until they eventually get themselves into serious trouble. So, if you want to keep rebel behavior in check, it’s important to nip it in the bud early on. Otherwise, you’ll be dealing with a full-blown rebellion before you know it.

6. “She’s in the past. The past is not my concern. The future is no longer my concern, either.”- Thomas Shelby

7. “You know, gentlemen, there is hell, and there is another place below hell.”- Thomas Shelby

Shelby is a tough gangster who is not afraid to get his hands dirty. In the quote, he is trying to warn his rivals that he will go to any lengths to get what he wants.

While Shelby is certainly not a saint, his willingness to fight for what he believes in is admirable. In today’s world, it’s often all too easy to give up when things get tough.

But as Shelby shows us, sometimes it’s worth digging deep and fighting for what we want. After all, what’s the worst that can happen? We might end up in “hell” – but at least we’ll have tried!

9. “A real man chooses to honor, love, respect, adore, and be faithful to one woman.”- Thomas Shelby

In today’s society, it seems like there is so much pressure to “man up” and be promiscuous. It’s like we’re not considered real men unless we’re sleeping around with as many women as possible. But what does that really mean?

And is that what being a man is all about?  A real man chooses to honor, love, respect, adore, and be faithful to one woman. That’s the kind of man one should be. And that’s the kind of man Thomas Shelby is. He’s a strong, confident, loyal man who knows what he wants in life.

And everyone admires that about him. So, ladies, if you’re looking for a real man, look for someone who chooses to honor, love, respect, adore, and be faithful to you. Because that’s the kind of man, you deserve.

10. “I have made arrangements with men I trust. If I should die, then you will die, know that.”- Thomas Shelby

Basically, when you’re in a tough spot, you don’t have time to negotiate or haggle. You just have to act fast and do whatever it takes to get out of the situation.

This could mean fighting your way out, running away, or hiding until the coast is clear. Whatever the case may be, you don’t want to waste time trying to talk your way out of a bad situation. Just take action and get yourself to safety.

The quote is basically saying that people who have good taste can’t afford to be flashy. A more accurate translation might be “classy people don’t need to show off.” Sapphires are obviously very expensive gemstones, so by wearing them, you are showing that you have money.

But if you have good taste, you know that being understated is more elegant than flaunting your wealth. You don’t need to prove anything to anyone because you’re confident in your own sense of style.

This quote is probably aimed at people who are trying too hard to impress others with their material possessions. at the end of the day, it’s not what you have; it’s how you use it. So even if you can’t afford sapphires, as long as you have good taste, you’ll still be ahead of the game.

14. “I’m not a traitor to my class. I am just an extreme example of what a working man can achieve.”- Thomas Shelby

At first glance, Thomas Shelby’s statement might come across as a bit self-congratulatory. After all, he is proclaiming himself to be the “extreme example” of what a working man can achieve. But upon further reflection, there is a lot of truth to Shelby’s words.

He comes from a humble background, yet through hard work and determination, he has managed to build an empire. While some might see him as a traitor to his class, Shelby sees himself as a shining example of what is possible for those who are willing to fight for their dreams.

In a way, Shelby is giving hope to those who feel trapped by their circumstances. He is showing them that it is possible to rise above one’s station in life and achieve great things. In this sense, Shelby is not only a successful businessman but also an inspirational figure.

15. “I can charm dogs. Gypsy witchcraft. And those I can’t charm, I can kill with my own hands.”- Thomas Shelby

In other words, you can change your goals and aspirations, but you can’t change your behavior. Either way, the quote is a clever way of saying that people are often stuck in their ways and resistant to change. Whether we like it or not, our wants and our actions often dictate our lives.

19. “You have to get what you want your own way.”- Thomas Shelby

20. “The one who keeps causing you pain can never be your peace.”- Thomas Shelby

The one who keeps causing you pain can never be your peace. This is a quote by Thomas Shelby from Peaky Blinder and is very relevant in today’s world. There are so many people out there who are constantly causing pain to others, whether it be physical or emotional pain.

And yet, they expect those same people to be their peace. It just doesn’t make any sense. If you’re the one causing all the pain, then how can you ever expect to find peace? You can’t have your cake and eat it too, as they say.

21. “When you plan something well, there’s no need to rush.”- Thomas Shelby

Thomas Shelby’s sage advice applies to all aspects of life, not just planning. When you Rush, you’re more likely to make mistakes, overlook important details, and generally create a mess.

But when you take your time and do things slowly and carefully, everything usually works out much better. Of course, there are exceptions to this rule – sometimes, you do need to Rush in order to meet a deadline or accomplish something important.

22. “Conviction introduces emotion, which is the enemy of oratory.”- Thomas Shelby

23. “You strike when your enemy is weak.”- Thomas Shelby

The Peaky Blinders were an English street gang based in Birmingham who were active during the late 19th and early 20th centuries. The gang was notorious for its violence and criminal activities, which included pickpocketing, robbery, and assault.

They were also known for their signature look, which included peaked flat caps and sharp suits. In the quote, Thomas Shelby is saying that you should take advantage of your enemy when they are weak. This is good advice in general, but especially when your enemy is as strong and dangerous as the Peaky Blinders.

If you can find a moment when they are vulnerable, you should strike quickly and without mercy. Otherwise, you may find yourself on the receiving end of their brutal violence.

24. “The only way to guarantee peace is by making the prospect of war seem hopeless.”- Thomas Shelby

This is a very inspiring quote for people who are struggling in their lives. It shows that if you keep trying, you will eventually succeed. The quote also shows that even if you are currently in a difficult situation, you can still turn things around and make something of yourself.

This is a great message for people who are facing adversity, and it is something that we should all keep in mind.

Thomas Shelby is one of the most intriguing and fascinating characters on television today. His quotes reflect the wisdom and understanding that he has gained from a life filled with violence and bloodshed.

If you haven’t seen Peaky Blinders yet, We highly recommend it – especially if you’re a fan of crime dramas. Thanks for reading!