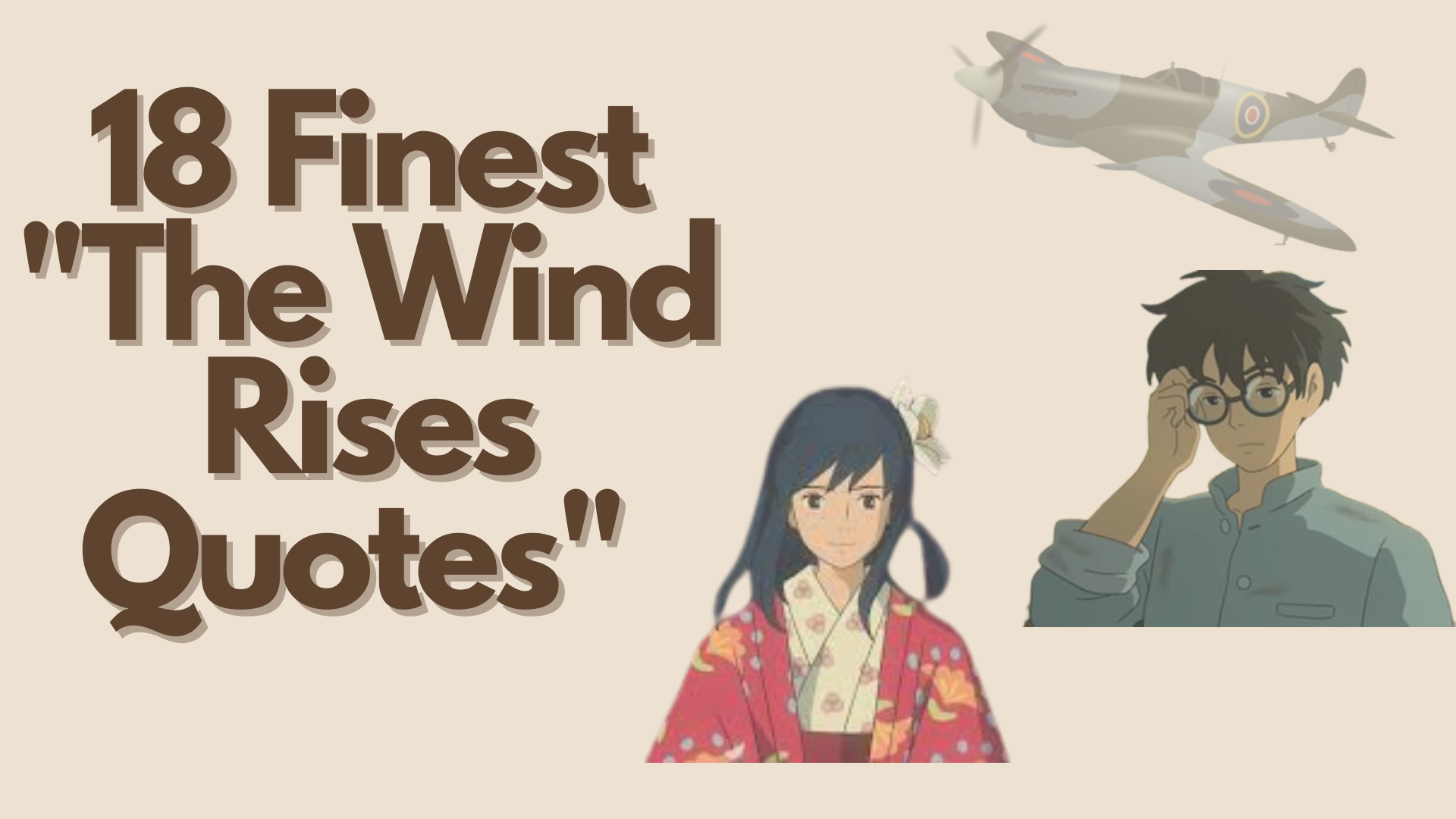 When you watch the film “The Wind Rises” you can’t help but be mesmerized by the beauty of the animation and the story itself.

The tale of Jiro Horikoshi, who designed fighter planes for Japan during World War II, is one that will stay with you long after the credits roll.

This movie is a masterpiece and contains some of the most beautiful quotes we have ever heard.

In this article, we will take a look at 25 of the best quotes from “The Wind Rises.”

About the Japanese animated film “The Wind Rises”

The movie “The Wind Rises” is inspired by the life of Jiro Horikoshi, the designer of the Mitsubishi A5M and A6M Zero fighter planes for the Imperial Japanese Navy during World War II.

The film was Japan’s most popular in 2013 and was praised by critics.

The Wind Rises received thirteen nominations and seventeen accolades for “Best Animated Feature,” including one nomination at the Academy Awards.

At the 41st Annie Awards, Hayao Miyazaki was given the prize for “Writing in an Animated Feature Production.”

The Japan Academy Prize for Best Music Score was presented to the film’s music composer, Joe Hisaishi, at a ceremony on April 25.

The movie was also chosen as “Audience Favorite – Animation” at the Mill Valley Film Festival.

Here are the best The Wind Rises Quotes

If you’re a fan of Hayao Miyazaki films or beautiful quotes, then you need to check out “The Wind Rises.”

This film is one of Miyazaki’s most recent and it is absolutely stunning. The story follows Jiro Horikoshi, who is a designer of airplanes during Japan’s time of war.

Throughout the film, Jiro reflects on his life and the people he’s met along the way. The dialogue is so poignant and the messages are so powerful that we found ourselves re-watching scenes several times simply to take it all in.

If you’re looking for a heartwarming tale with amazing animation and unforgettable quotes, “The Wind Rises” is definitely worth watching!

Now let’s move on to the quotes…..

1. “Who has seen the wind? Neither I nor you: But when the leaves hang trembling, The wind is passing through.”-Jiro Horikoshi

The wind is one of the most enigmatic natural forces, and the way it moves has long captivated the imagination of poets, artists, and scientists alike.

The above quote perfectly captures the strange power and beauty of the wind, as Jiro Horikoshi poses the question: who can truly say they have seen the wind?

Only the gentle rustling of leaves in the trees gives us any hints at the presence of the wind; otherwise, it remains invisible to our eyes. Yet despite its subtlety, the wind is not to be underestimated.

Whether driving mighty storms or carrying tiny seeds on its currents, the wind has the power to shape both land and life. Whether we want to harness its energy or simply explore its mysteries, the wind will always hold a certain allure that is hard to resist.

So let us take joy in the elegance of this mysterious force and embrace all that it has to offer us. For when the leaves hang trembling under its touch, we know that the winding pathways and endless possibilities are opening before us once again.

And what could be better than that?

At the core of every great engineer lies a steadfast dedication to their craft. Whether they are developing the latest smartphone or building the newest high-speed train, these engineers are driven by the desire for innovation and excellence.

And yet, despite the many challenges that these ambitious engineers face, the field has provided them with the skills and knowledge needed to succeed. As the quote goes, “every engineer has his 10 years in the sun,” and this guiding principle has come to define the spirit of engineering at its finest.

Whether they are soaring over the clouds like the wind or putting out wildfires around the clock, these dedicated professionals continue to push the boundaries of what is possible.

In the end, their success comes not from individual flair or good fortune, but from their deep commitment to one of humanity’s greatest forms of exploration: engineering.

So let us celebrate those who have risen above the rest and made a lasting impact on our world with their ingenuity, compassion, and courage in all things big and small.

In so doing, we honor an enduring legacy that cannot be denied.

For as long as humans have looked to the skies, we have dreamed of taking to the air ourselves. And for just as long, engineers have been working to make that dream a reality.

The Wright brothers made the first powered flight in 1903, and since then, airplanes have come a long way.

Today, they are some of the most complex machines ever built, capable of carrying hundreds of passengers across the globe at speeds of over 600 miles per hour.

The next time you step aboard an airplane, take a moment to appreciate the engineering marvel that is making your journey possible.

And if you ever find yourself looking up at the clouds, remember that the dream of flight is still very much alive.

7. “We thought you were going to marry an airplane!”-Kurokawa

These words, spoken by the protagonist of the film “The Wind Rises”, perfectly capture the ethereal beauty of the natural world.

The wind is always changing, never the same for long. It’s a force that can both nurture and destroy. And yet, we can’t help but be drawn to it.

There is something wild and free about the wind that speaks to our souls. It is a reminder that we are all part of something bigger than ourselves.

Whenever we feel lost or alone, we can close our eyes and let the wind carry us away.

The future has always been a mystery to humankind. What does the future hold for us? What can we do to make the future better for ourselves and for the world?

These are the questions that have driven us to explore the unknown and to push the boundaries of what is possible. And it is when we are inspired that we are most likely to find the answers we are looking for.

As the great philosopher, Lao Tzu once said, “The wind rises, and we set sail.” When we are inspired, we set sail on a journey into the unknown, seeking to discover the things that have never been seen or imagined before.

It is only when we are inspired that we can hope to unlock the mysteries of the future. So let us all seek out inspiration in our lives, and let us use it to light the way to a better tomorrow.

There’s something about the pyramids that just seems to capture the imagination. Perhaps it’s their imposing size or the fact that they’re some of the oldest structures in the world.

Whatever the reason, the pyramids are an enduring symbol of human achievement.

In a world without pyramids, it’s hard to say what would take their place. Maybe we’d have giant statues of our greatest leaders, or soaring towers that reached the sky. Or maybe we’d just have a lot more open space.

Without the pyramids, the world would be a very different place.

But which would we choose? A world with pyramids, or a world without? We are not sure. There’s something about the pyramids that we can’t help but find fascinating. They’re a reminder of what humans are capable of achieving, even with the most basic of tools. So we think we’d choose a world with pyramids. After all, who knows what we might be able to achieve if we set our minds to it?

11. “Airplanes are beautiful, cursed dreams, waiting for the sky to swallow them up.”-Caproni

Jules Verne once said, “The wind is the true ruler of the air,” and there is no truer statement when it comes to airplanes. Airplanes are at the mercy of the wind, which can toss them about like leaves in a storm.

Even the most experienced pilots cannot always control an airplane in the face of strong winds. This powerlessness can be terrifying, and it is one of the many reasons that airplanes are both beautiful and cursed dreams.

There is something magical about watching an airplane soar through the sky on a sunny day, but there is also something haunting about knowing that the wind could sweep it away at any moment.

Airplanes are both a reminder of the fragility of life and a symbol of our endless desire to explore the unknown.

13. “Be careful, this may be a dream but you can still lose your head!”-Caproni

When the wind rises, the world can seem like a precarious place. The crisp and cool air is filled with the promise of change, mystery, and adventure.

But the wise know that the real journey lies within ourselves, not out in the open sky. As the old saying goes, “be careful, what you wish for” With every breath we take and every choice we make, we lay the foundation for the person we will become.

And at the end of the path is hope: the ability to create our own destiny, the freedom to craft our own reality. So when the wind rises once again, let us embrace it – for it will lead us on the adventure of a lifetime.

After all, as Robert Frost famously said, “the wind is rising! Let us go forward into the mist!”

14. “Tell me Japanese Boy. Is the wind still rising?”-Caproni

This quote, from the opening of the film The Wind Rises, sets the tone for the entire story.

The film is a semi-biographical account of the life of Jiro Horikoshi, the man who designed the Zero fighter plane during World War II.

The wind represents the turbulence of war, and the question is whether Jiro will be able to overcome the odds and create something beautiful. The film follows Jiro’s journey from aspiring airplane designer to respected engineer, through the highs and lows of war.

In the end, Jiro emerges as a symbol of hope and resilience, proving that the human spirit can triumph over even the most trying circumstances. The Wind Rises is a heart-wrenching story that reminds us of the power of dreams and the strength of the human spirit.

16. “Wind is the breath of the gods. If you listen to it, you can hear their voices.” – Jiro Horikoshi

17. “All of us live our lives in pursuit of dreams.” – Jiro Horikoshi

18. “Airplanes are beautiful dreams. Pilots are their poets.” – Tatsuo Hori

Although The Wind Rises is a sad movie, it is also an incredibly beautiful one. The quotes from the film are stunning and full of intelligence, making them perfect for reflection.

Jiro’s journey is one that will stay with audiences long after they finish watching the film, and these quotes are a wonderful way to keep that feeling alive.

Have you seen The Wind Rises? What did you think of the film? Do you have a favorite quote? Let us know in the comments!