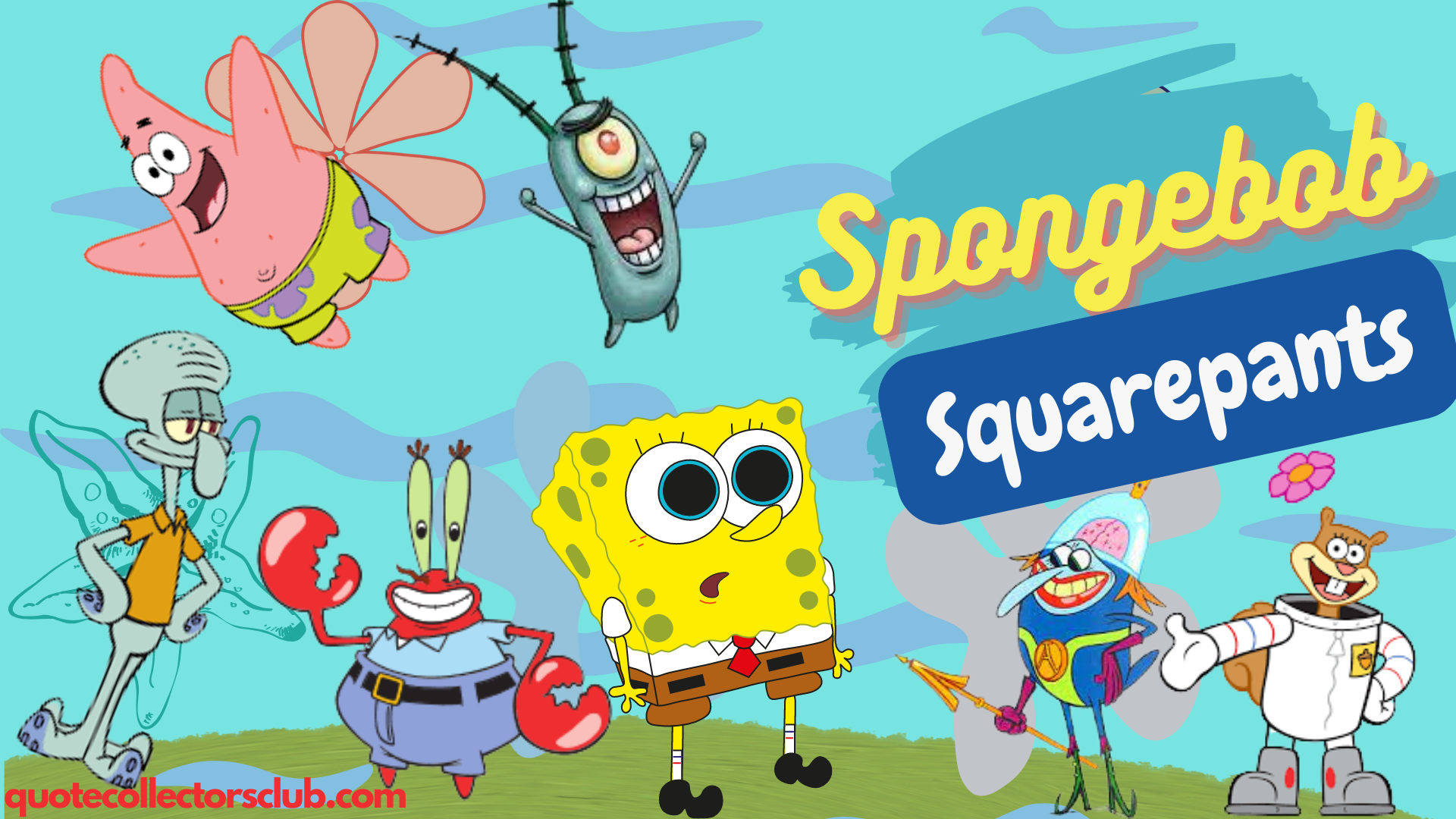 If you’re a fan of SpongeBob SquarePants, then you know that the show is full of hilarious quotes. In this article, we’ll be highlighting some of our favorite quotes from the series.

Whether you’re a fan of the sarcastic humor of Squidward Tentacles or the childish innocence of SpongeBob himself, these quotes are sure to make you laugh!

The series chronicles the adventures and mishaps of SpongeBob, a sea sponge, and his aquatic friends in the fictional underwater city of Bikini Bottom. SpongeBob’s experiences and attitudes are a perpetual source of comedy for the show, which has led to its popularity among viewers of all ages.

The show has also been praised for its subversive humor, narrative complexity, and musicality. In addition to its regular episodes, SpongeBob SquarePants has also spawned several specials and movies, including The SpongeBob Movie:

Sponge Out of Water (2015). With its imaginative storytelling, lovable characters, and inside jokes, SpongeBob SquarePants is a truly unique TV show that continues to entertain audiences around the world.

Here are the best Spongebob Quotes

The show has attracted widespread critical acclaim and has become one of the most popular children’s shows on television.

Let’s  take a look at some of the best SpongeBob quotes:

Happiness is a state of mind, but it’s also closely linked to our material well-being. Money may not buy happiness, but it can certainly help to make life more comfortable.

And that’s why the SpongeBob character Mr. Krabs is so fixated on money. He knows that having more money can help to make life easier and more enjoyable. Of course, he’s also a bit of a greedy Scrooge, but that’s another matter entirely!

In any case, Mr. Krabs is right: money does make life happier – at least to some extent. Just make sure not to obsess over it too much.

2. “We don’t need television…not as long as we have our imagination.” – Spongebob

Spongebob is one of the most popular cartoon characters of all time, and he is known for his optimistic outlook on life. In this Spongebob quote, he encourages people to use their imagination instead of relying on television.

Spongebob believes that imagination is more powerful than television because it allows people to create their own stories and experiences. This Spongebob quote is a great reminder to take some time for yourself and use your imagination instead of vegging out in front of the television.

Spongebob’s positive outlook is sure to put a smile on your face, and his wise words will help you see the power of imagination.

4. “If you believe in yourself, with a tiny pinch of magic all your dreams can come true!” – Spongebob

5. “I don’t get it. No matter what I do, I always end up being squashed by someone bigger than me.” – Plankton

6. “You never really know the true value of a moment, until it becomes a memory.” – SpongeBob

This quote is a great reminder that we should cherish every moment because it will eventually become a memory. SpongeBob himself is a living memory for many people, as he has been on television for over 20 years.

For many people, SpongeBob represents childhood innocence and happiness. He is a reminder that even though life can be tough, there are still moments of joy to be appreciated.

SpongeBob’s quote encourages us to slow down and appreciate the value of each moment because sooner or later, it will become a memory.

7. “Gary, I’m absorbing his blows like I’m made of some sort of spongy material.” – Spongebob.

What does Spongebob mean when he says this? Spongebob is referring to the fact that it is always safe inside your home. This is because your home is a special place where you are protected from the dangers of the outside world.

When you are indoors, you never have to worry about being harmed by the elements or by other people. Spongebob’s quote reminds us that our homes are our refuge from the chaos of the world and that we should always cherish them.

10. “Always follow your heart unless your heart is bad with directions.” – Spongebob

Spongebob is always full of sage advice, and this quote is no exception. Always following your heart is a great life philosophy… unless your heart isn’t very good at giving directions.

In that case, you might want to consider using a map instead. But as Spongebob knows, the best way to live life is with your heart leading the way. After all, what’s the point of having a heart if you’re not going to follow it?

11. “Wait, Spongebob, we’re not cavemen. We have technology.” – Patrick

This particular Spongebob quote is perfect for explaining the difference between good and bad people. Good people don’t go around hurting other people physically or emotionally.

They don’t take pleasure in seeing other people in pain. They would never rip someone’s arm off – metaphorically or otherwise. Spongebob’s quote is a great reminder that we should all try to be good people and treat others with kindness and respect.

13. “Dumb people are always blissfully unaware of how dumb they really are…” – Patrick

People who are not very smart are often not aware of their lack of intelligence. This could be because they do not engage in intellectual conversations, or they simply do not have the self-awareness to realize their own shortcomings.

16. “Is mayonnaise an instrument?” – Patrick

17. “All I know is fine dining and breathing.” – SpongeBob

18. “I have a square head and a real ghost has a round one. All we have to do is make my head round and boo, I’m scary!” – Spongebob

20. “Give to the Children’s fund? What have the children ever done for me?” – Mr. Krabs

22. “It’s just a cruel reminder that I’m single and likely to remain that way forever.” – Squidward

23. “Another day, another migraine” – Squidward

Spongebob’s friend Squidward is usually the grumpiest character on the show, so it’s no surprise that he would be the one to say this. But even he can’t help but crack a smile when Spongebob does something silly.

24. “What doesn’t kill you, usually succeeds in the second attempt.” – Mr. Krabs

25. “Once upon a time there was an ugly barnacle. He was so ugly that everyone died. The end!” – Patrick

In one episode, Spongebob’s friend Patrick tells a story about an ugly barnacle. The barnacle is so ugly that everyone who sees it dies.

The SpongeBob SquarePants characters SpongeBob, Patrick, and Squidward live in the fictional underwater city of Bikini Bottom. SpongeBob is employed as a fry cook at the Krusty Krab, a fast food restaurant owned by Mr. Krabs. SpongeBob’s hobbies include jellyfish, bubbles, and Krabby Patties.

He is also friends with Sandy Cheeks, a squirrel from Texas who lives in an underwater tree dome. Spongebob is known for his catchphrases, “I’m ready!” and “Can I be excused for the rest of my life?”

The latter Spongebob quote is often used when Spongebob is faced with something he doesn’t want to do or doesn’t like. For example, in the episode “The declines,” Spongebob pretends to be sick so that he doesn’t have to go to work. When Mr. Krabs comes to check on Spongebob, Spongebob says, “Can I be excused for the rest of my life?”

In this instance, Spongebob is not interested in working at the Krusty Krab and would rather do something else with his life. However, Spongebob usually ends up going back to work eventually because he knows that it’s important to Mr. Krabs and he enjoys being a fry cook.

31. “SpongeBob is the only guy I know who can have fun with a jellyfish…for 12 hours!” – Squidward.

34. “The best time to wear a striped sweater is all the time!” – SpongeBob

We hope you enjoyed these 34 quotes from SpongeBob SquarePants. This series is a classic for a reason- it’s hilarious, heartwarming, and full of wisdom. Whether you are a long-time fan or just getting to know this lovable sponge, we’re sure you found something to love in these quotes.

If you have any suggestions for other famous quotes from SpongeBob SquarePants that should be added to this list, let us know! Thanks for following along.