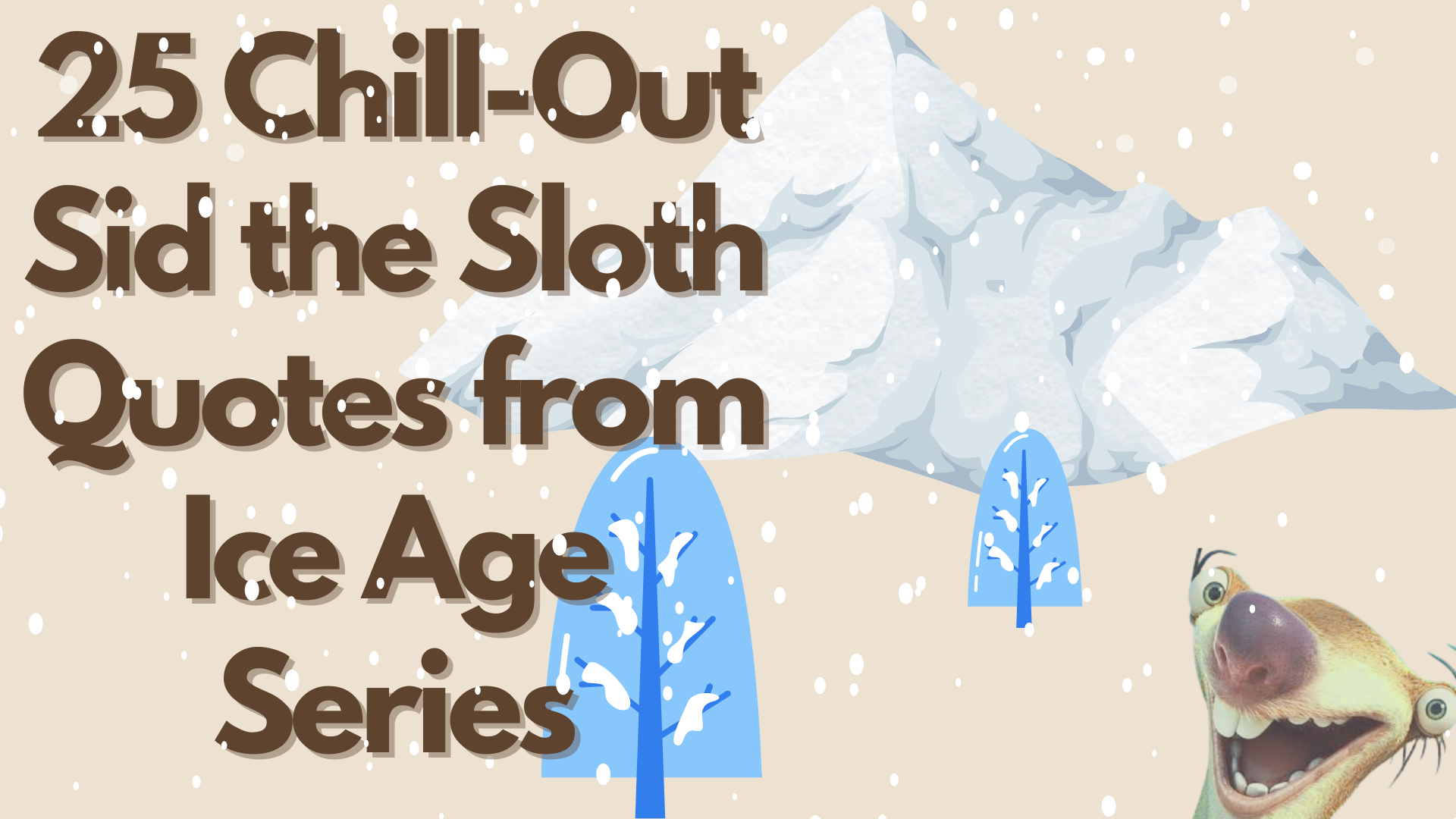 If you’re a fan of the Ice Age movies, then you know about Sid the Sloth. This lovable character is known for his funny quotes and adorable personality. In this article, we’ll list some of our favorite quotes from Sid the Sloth. We hope you enjoy them!

About Sid the Sloth

Sid the sloth is one of the main characters in the Ice Age franchise. He is a lazy and clumsy Ground Sloth who is always getting himself into trouble. However, despite his numerous flaws, Sid is a lovable character who always manages to help his friends in their time of need.

He first appears in the first film, where he meets Manny the Mammoth and Diego the Saber-Tooth Tiger. Together, they embark on a journey to return a human baby to its father.

Sid quickly becomes close to Manny and Diego, and he continues to play a significant role in the subsequent films. In the third film, Sid becomes stranded on an island with a group of other animals.

Here, he learns how to be independent and eventually helps his friends to escape from the island. Sid is a lovable character who always manages to help his friends in their time of need, making him a valuable member of the Ice Age team.

Here are the Top Sid the Sloth Quotes

Despite his lazy nature, Sid is a brave and courageous character who is always willing to stand up for what he believes in. Having said that, here are our best quotes from Sid the Sloth:

1.  “I don’t know about you guys, but we are the weirdest herd I’ve ever seen.”- Sid the Sloth

Sid the Sloth may not be the most Heroic looking mammal out there. In fact, he’s pretty darn lazy. But, what Sid lacks in speed and agility, he makes up for in heart. He is always there for his friends, always lending a helping hand (or paw).

Whether it’s cheering them up when they’re feeling down or rescuing them from hunger, Sid is always ready to help. And that’s what being a Hero is all about – being there for others in their time of need.

So, next time you see Sid lounging around in a tree, remember that this little mammal is a Hero in disguise. And, who knows, maybe one day he’ll even teach us a thing or two about what it means to be truly heroic.

3. “Gosh, I hate breaking their hearts like that. But you know how it is.”- Sid the Sloth

4. “Boy! For a second there, I actually thought you were gonna eat me!”- Sid the Sloth

5. “This has definitely not been my day. You know what I’m saying, buddy? What a mess.”- Sid the Sloth

6. “You can’t leave him here. Look, there’s smoke! That’s his herd right up the hill. We should return him.”- Sid the Sloth

7. “My family abandoned me. They just kinda migrated without me. You should see what they did last year. They woke up early and tied my hands and feet and they gagged me with a field mouse, covered their tracks, went through water so I’d lose their scent and—who needs ’em, anyway?”- Sid the Sloth

Sid the sloth is right, humans are disgusting! Not only do they not care about the environment, but they actively destroy it. They cut down trees, pollute the air and water, and kill animals for sport or for their fur.

And if that wasn’t enough, they also make products from the skin of animals and use them as decoration or clothing. It’s no wonder Sid hates us so much! We’re ruining his home and his way of life, and we don’t even seem to care.

It’s time for humans to clean up our act and show some respect for the planet we live on. Otherwise, we’ll end up like Sid – alone and disgusted with ourselves.

This was a question posed by Sid the Sloth in the animated movie Ice Age. It is an interesting question that has been debated throughout history. Some people believe that brains are more important than brawn, while others believe the opposite.

There are arguments to be made for both sides, but ultimately it depends on what you value most. If you value intelligence and creativity, then you would probably say that brains are more important than brawn.

After all, it is the smart and creative people who come up with new innovations and solve complex problems. They are the ones who make the world a better place.

On the other hand, if you value physical strength and power, then you would probably say that brawn is more important than brains. After all, it is the strong and powerful people who protect us from harm and keep us safe.

They are the ones who make the world a safer place. Ultimately, it is up to you to decide which one is more important to you.

15. “That south thing is way overrated. The heat, the crowds—who needs it? Isn’t this great? You and me, two bachelors knockin’ about in the wild.”- Sid the Sloth

Sloths are unique creatures that are often misunderstood. Though they may appear lazy, sloths are actually very efficient animals who have adapted to their rainforest habitat.

When it comes to moving, sloths take a “slow and steady” approach that conserves energy and allows them to blend in with their surroundings. This low-key lifestyle also helps to prevent predators from spotting them.

When it comes to eating, sloths have a similarly relaxed approach. They consume a diet of leaves, which are low in nutrients and require little chewing. This leisurely lifestyle may not be for everyone, but for sloths, it’s just another day in the rainforest.

21. “They left without me. They do this every year. Why? Doesn’t anyone love me? Isn’t there anyone who cares about Sid the Sloth?”- Sid the Sloth

Sid the sloth is one of the most interesting creatures in the animal kingdom. Though little is known about his early life, it is clear that Sid has had to overcome some significant challenges.

What is clear is that Sid’s mother always told him that “bad news is just good news in disguise” before abandoning him for good. Despite all of this, Sid has persevered and become one of the most lovable and popular animals in the world.

Thanks to his positive attitude and adorable face, Sid has inspired millions of people to see the good in even the toughest situations. There’s no doubt that Sid is truly one of a kind!

Sid, the Sloth is one of the most lovable characters from the Ice Age movies. He is always there to provide some comic relief and his quotes are sure to make you smile.

We hope you enjoyed these 25 Sid, the Sloth quotes as much as we did. If you have any suggestions for future blog posts, let us know!