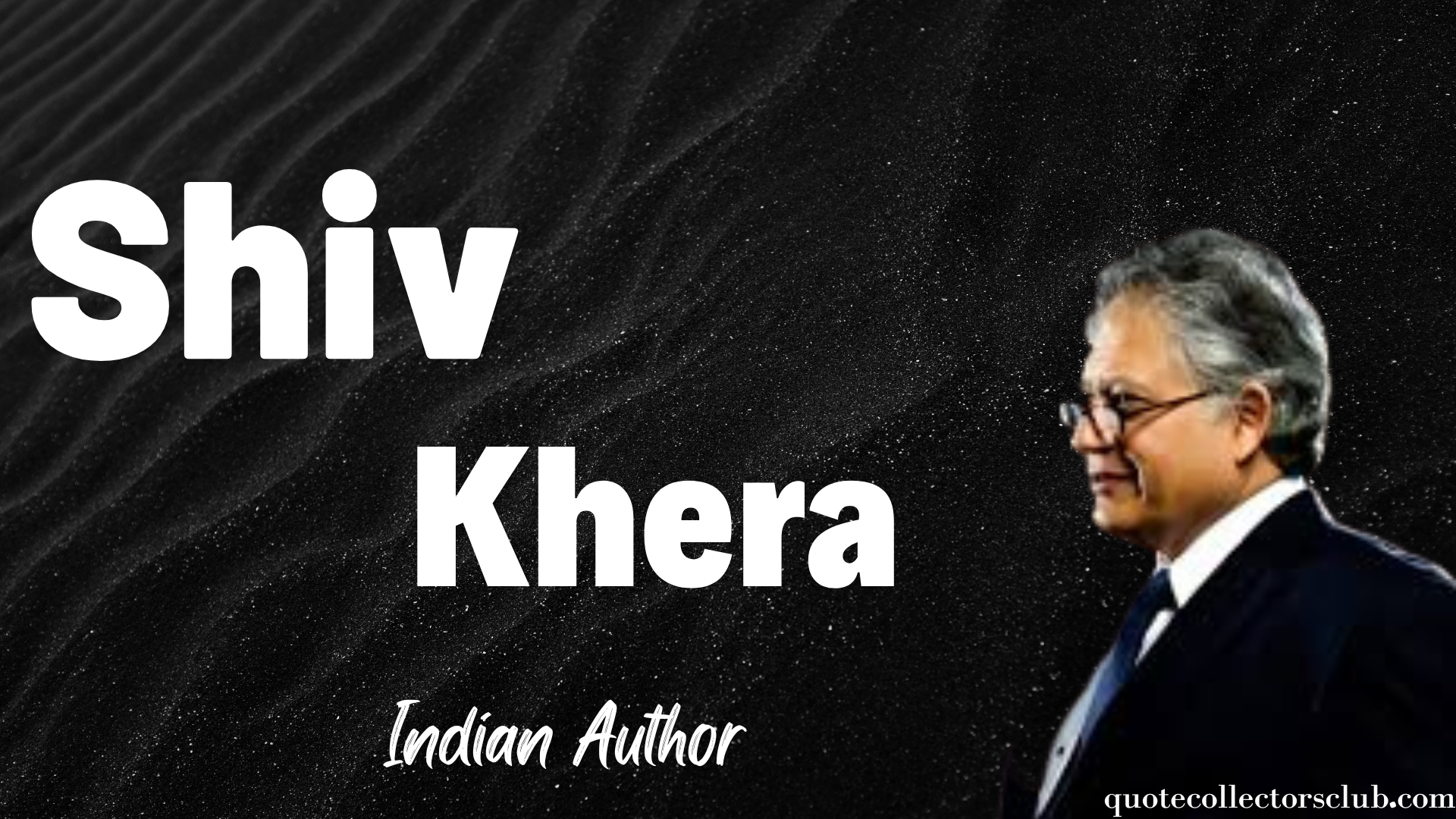 Khera’s family was originally in the coal mining business, but it was later nationalized by the Indian Government. He worked as a carwasher and life insurance agent before becoming an inspirational speaker after hearing Norman Vincent Peale deliver his lectures while working abroad (in America).

Khera founded the Country First Foundation, an organization that works to ensure freedom through education and justice. In 2004 he stood as a candidate from South Delhi in the Indian general elections but lost badly; this was not, however, until 2008 when Khera began his work on creating new political parties like Bharatiya Rashtravadi Samanata Party.

He campaigned heavily during the 2014 polls, with support largely coming to Bhartiya Janata Party due to their senior member Lal Krishna Advani being one of the key leaders.

Shiv Khera’s first book, “You Can Win,” offers readers insights into how they can empower themselves and grow. The second title is about achieving more success in life through practicality for business professionals who want their dreams to come true! His third work focuses on sales strategies that will help you make a profit no matter what industry or market sector your company operates within.

Shiv Khera was one of the speakers at the Bhagavad Gita Summit (from 10th – 14th December 2021) in Dallas, Texas, US, which coincided with Gita Jayanti. Other notable participants included Swami Mukundananda Ji, Dr. Menas Kafatos, Kiran Bedi, Brahmacharini Gloria Arieira, and others. Let’s take a look at some of the best quotes from Shiv Khera’s speech and books!

1. “Under adverse conditions- some people break down, some break records.” – Shiv Khera

Anyone who has ever faced adversity knows that it can be difficult to maintain a positive outlook. When things are going wrong, it can be tempting to give up and resign yourself to defeat. However, as the quote suggests, there are always a few people who manage to rise to the occasion and break records.

In the face of adversity, these individuals display incredible resilience and determination. They refuse to give in, instead choosing to push themselves harder than ever before. As a result, they often achieve amazing feats that others thought were impossible.

3. “Success is not an accident. It is the result of your attitude, and your attitude is a choice. Hence, success is a matter of choice and not chance.” – Shiv Khera

Positive thinking by itself is not enough to create success. It must be combined with positive action for meaningful change to occur. This is because our thoughts influence our actions and vice versa. If we only focus on positive thinking, we may become complacent and fail to take the necessary steps to achieve our goals.

5. “The difference between a great man and a little man is their commitment to integrity and hard work.” – Shiv Khera

At first glance, it may seem that the only thing separating great men from little men is their ability to achieve big things. However, upon closer inspection, it becomes evident that there is much more to it than that.

Great men are distinguished from little men by their commitment to integrity and hard work. In a world full of shortcuts and easy answers, they are the ones who are willing to do what it takes to get the job done right.

They understand that greatness is not a destination but a journey – one that requires dedication and perseverance. As a result, they are constantly pushing themselves to new levels, never settling for mediocrity. It is this commitment to excellence that separates great men from the rest.

6. “Being ignorant is not so much a shame as being unwilling to learn to do things the right way.” – Shiv Khera

8.  “Just like a great building stands on a foundation, so does success, And the foundation of success is attitude.” – Shiv Khera

When faced with challenges, winners don’t give up; they find a way to overcome them. They see the potential for success, even when others see only failure. Losers, on the other hand, often dwell on past failures and allow them to dictate their future. They see every setback as confirmation that they’re not good enough and that they’ll never achieve their goals.

This negative mindset leads to inaction and self-defeat. Winners may not always achieve their goals, but they never give up trying. Their positive outlook gives them the strength to keep going, even when the odds seem insurmountable. It’s this determination that sets winners apart from losers.

12. “Truth is pure and simple whereas lies need to be created and invented.” – Shiv Khera

You can just say what happened. Whereas with lies, you have to come up with them and then keep track of what you said so you don’t get caught in a lie.

14. “Ability will get you success. The character will keep you successful.” – Shiv Khera

Anyone who has ever achieved anything knows that it takes more than just hard work to be successful. It’s not enough to simply put in the hours – you have to be willing to think outside the box and do things differently. That’s what separates the winners from the losers.

The winners are the ones who are always looking for new and better ways to get things done. They’re not afraid to take risks, and they’re always learning and growing. On the other hand, losers are content to stay in their comfort zone and do things the way they’ve always done.

If you want to win in life, you need to be like the winners – always looking for new opportunities and willing to take risks. Only then will you achieve your goals and reach your full potential.

16. “A person’s character is revealed by the way he treats his subordinates, the elderly and the disabled.” – Shiv Khera

17. “Leadership is about persuasion, presentation, and people skills.” – Shiv Khera

18. “So long as you have your eyes on the goal, you don’t see the obstacles.” – Shiv Khera

Every great journey begins with a single step, but it is often the second step that is the hardest to take. This is because, by then, the excitement of the beginning has worn off, and the full reality of the task at hand sets in. It is at this point that many people give up, convinced that the goal is too far out of reach.

20. “We judge ourselves by our intentions, but the world judges us by our actions.” – Shiv Khera

How we present ourselves to the world is often determined by our intentions. We may have good intentions, but if our actions don’t reflect that, then we will be judged accordingly.

This quote is a reminder that we need to be mindful of our actions and how they impact others. It’s easy to get caught up in our own lives and forget that our actions have consequences.

If we want to be judged positively by the world, then we need to make sure that our actions align with our intentions. Only then can we hope to receive the judgment we desire.

21. “Betrayal and breach of trust with others starts with the betrayal of self.” – Shiv Khera

23. “Most failures are people who habitually make excuses.” – Shiv Khera

24. “People with pride in performance hold themselves accountable for higher standards and performance.” – Shiv Khera

25. “The only way to get started is to just stop talking and get started.” – Shiv Khera

Starting something new can be a daunting task. It can be hard to know where to begin or even what the first step should be. Oftentimes, we can get caught up in planning and preparing, and before we know it, months have gone by, and we haven’t made any progress.

27.  “Success neither brings arrogance nor humility. It just brings to surface what was hiding before.” – Shiv Khera

28. “Your journey to success should be as rewarding and enjoying as the arrival at the destination.” – Shiv Khera

30.  “Nobody drowns by falling in the water, but by staying there.” – Shiv Khera

In many ways, this quote can be applied to life in general. Too often, we find ourselves in difficult situations and feel like we are drowning. However, it is important to remember that we only drown if we stay in those situations.

We have the power to choose how we react to the challenges we face. We can either let them defeat us or use them as an opportunity to grow and emerge stronger.

31. “True character is doing the right thing even when no one is watching.” – Shiv Khera

32. “The saddest words in life are “I should have.” Make timely decisions and take timely actions.” – Shiv Khera

Shiv Khera is one of the most renowned Indian authors, and his quotes are sure to motivate you. We hope you found these quotes interesting and insightful.

If you have any suggestions for similar posts, let us know. Till then, keep reading!