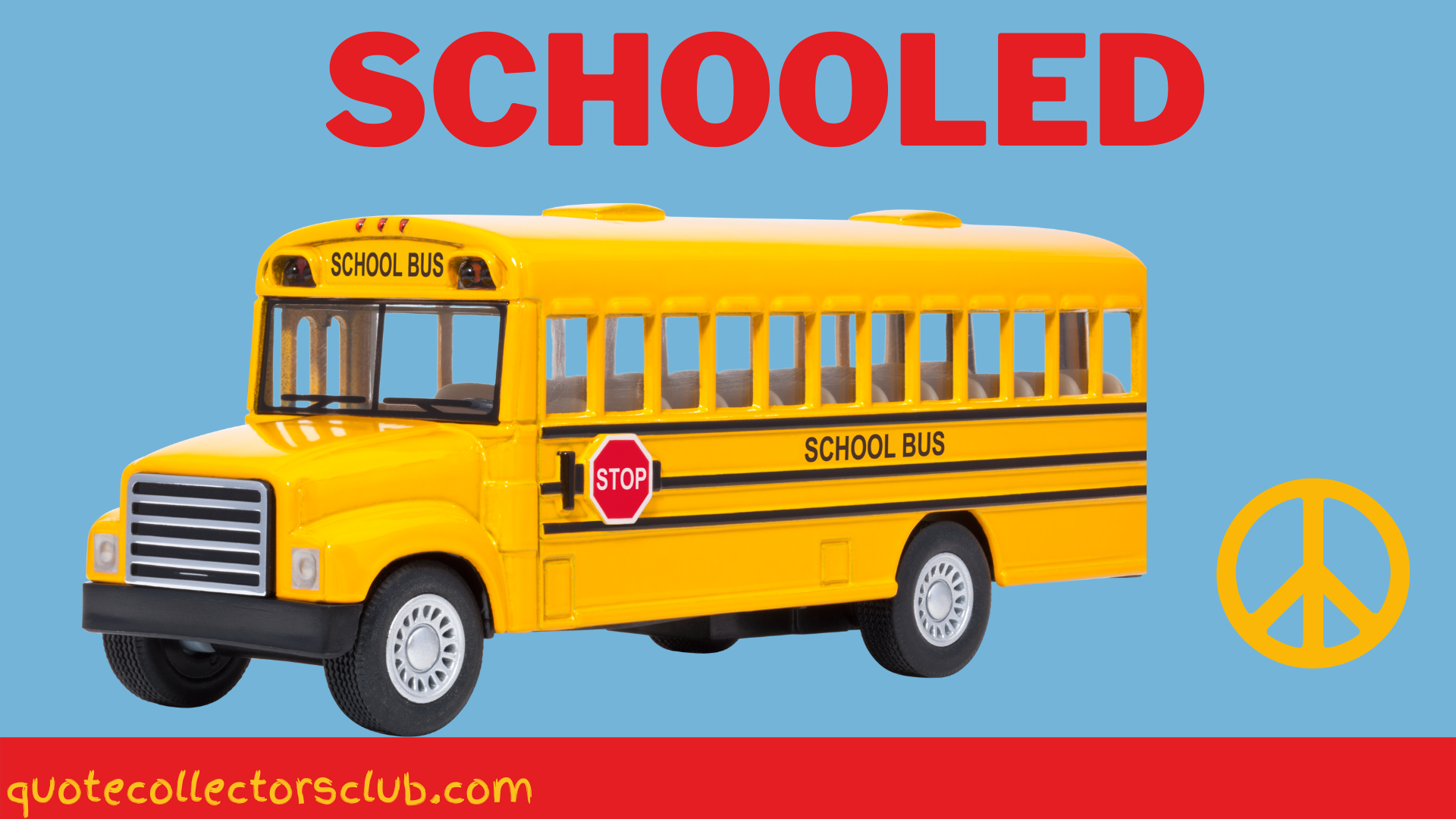 “Schooled” is a young adult novel by Gordon Korman that was published in 2007. The novel follows the story of 13-year-old Capricorn Anderson, who has to attend school under some special circumstances.

In this school, he must face the challenges of fitting in, making friends, and dealing with bullies. Along the way, he learns some valuable lessons about himself and life in general. Here are some of the best quotes from the book!

About The Novel “Schooled”

Schooled is a 2007 young adult novel by Gordon Korman. The novel follows Capricorn Anderson, a thirteen-year-old boy who has been homeschooled by his hippie grandmother on a commune. When his grandmother injured herself, And as further things unfold due to her injury, Cap is sent to public school for the first time.

He struggles to adapt to the regimented environment and strict rules but eventually comes to appreciate the value of education. Schooled is an entertaining and thought-provoking novel that offers a unique perspective on the importance of schooling. Korman’s characters are richly drawn, and his prose is engaging. This is a novel that is sure to leave a lasting impression on readers.

Here are the best Schooled Quotes

Schooled is a funny and heartwarming novel that will resonate with anyone who has ever felt like an outsider. Let’s take a look at some of the best quotes from the book.

1. “When we lock things away,” he said with conviction, “we’re really imprisoning ourselves.”― Capricorn Anderson

In the novel “Schooled” by Gordon Korman, the character Capricorn Anderson talks about the importance of access to knowledge. He believes that when we try to keep information hidden away, we are really just harming ourselves.

This is because knowledge is power, and by locking it away, we are preventing ourselves from becoming truly educated and enlightened. Furthermore, by keeping information hidden, we are also creating an environment where people feel they need to break the law in order to access it.

This quote highlights the importance of open access to information, and it is something that we should all keep in mind in our modern world.

2. “They don’t have regular time at school, you know. They have periods. All of a sudden, an alarm goes off, and you’re supposed to drop what you’re doing and rush off to a different room with a different teacher to do something completely different! How can anybody learn like that?”― Capricorn Anderson

The quote from “schooled” by Gordon Korman is a great way to describe how the traditional school system is not effective for all students. The idea of having different periods for different subjects is confusing and overwhelming for some students, and it can be hard to learn in that environment.

For example, if a student is in the middle of a project and the alarm goes off, they have to stop what they are doing and go to another class. This can be disruptive and make it difficult to focus on the task at hand.

Furthermore, some students may not be interested in the subject they are supposed to be learning at that particular moment, and this can lead to them feeling bored or disengaged in their education. The traditional school system is not perfect, but it does not mean that it cannot be improved.

There are alternative methods of education that may be more effective for certain students, and it is important to find what works best for each individual child.

3. “That was the whole point of the community, to allow us to escape the money-hungry rat race of modern society. If people didn’t know us, they couldn’t find us, and we could live our lives in peace.”― Capricorn Anderson

In his novel “Schooled,” Gordon Korman offers a glimpse into an alternative way of life, one that is based on simplicity and self-sufficiency. The quote speaks to the desire of many people to get away from the materialism and greed that is so prevalent in society today.

For the members of the community in the novel, living off the grid allows them to avoid the rat race and live a more meaningful life. It’s a lifestyle that is based on cooperation and sharing rather than competition and individualism. In a world that is often characterized by greed and self-interest, it’s refreshing to see a story that promotes a different way of life.

4. “Rain was everything to me, my teacher, my family, and my whole universe. Garland was a community, but we were the community, the two of us!”― Capricorn Anderson

Rain is the grandmother of Capricorn Anderson, as she is seriously injured after falling from a tree.

Capricorn Anderson is worried about her as she is everything to him. He had already lost his parents when he was too young And has only one family member alive, that is his grandmother.

5. “If we’d been serviced by an eight-lane highway, Rain still would have handled my schooling personally. We wanted to avoid the low standards and cultural poison of a world that had lost its way.”― Capricorn Anderson

6. “You have a broken hip. It has to be pinned. After that, you’ll need extensive physical therapy. It’s a long process, and you can’t ignore it just because it doesn’t fit in with your plans.”― The City Doctor

7. “So that’s what I was doing when Rain fell, working on a vocabulary lesson. Most of the list

8. “We’ve got a problem, Cap. And you know what we do with problems.― Rain

We talk it out, think it out, work it out,”― Capricorn Anderson

The novel “Schooled” by Gordon Korman is set in a remote community where the residents have very little contact with the outside world. One of the main characters, Capricorn, is home-schooled by his grandmother, who has a very strict and old-fashioned view of education. In the quote, Rain is trying to explain to Cap that problems can be solved through discussion and reasoning rather than violence or aggression.

This is a very important lesson for Cap, who has been brought up in a sheltered environment where education is seen as a way to memorize facts and information. By learning to talk through problems, Capricorn is able to see that there are different ways of viewing the world and that not everything has to be black and white. This quote highlights an important theme in the novel, which is the importance of open-mindedness and understanding.

9. “You’re not listening!” Rain shrilled. “I’m the caregiver to my grandson! The only caregiver!”― Rain

10.  “It’s impossible to miss what you never had.”― Capricorn Anderson

The novel “schooled” by Gordon Korman is a coming-of-age story that follows the life of Capricorn Anderson, a boy who has been raised in isolation by his hippie grandmother. Throughout the novel, Capricorn struggles to adapt to the outside world and find his place in it.

The quote “It’s impossible to miss what you never had” speaks to this experience. For Capricorn, it is impossible to miss something that he has never had. He does not know what it is like to have a traditional education or to experience the things that his classmates take for granted. As a result, he is able to approach life with fresh eyes and an open mind.

This allows him to see the beauty in everyday life and to find joy in simple things. In the end, Capricorn learns that it is possible to have a good life without all of the material possessions that his classmates covet.

11. “Rain always said that anger upsets the balance inside a person. So when you yell at somebody,

you’re attacking yourself more than whoever it is you’re yelling at.”― Capricorn Anderson

When we get angry, we often feel like we are in control of our emotions and that we are justified in our anger. But what we forget is that our anger is also taking a toll on us emotionally and physically. When we yell at someone, we are raising our voices and putting strain on our vocal cords.

We are also releasing stress hormones like cortisol which can lead to physical ailments like headaches and stomachaches. So next time you find yourself getting angry, remember that you are not only harming the person you are yelling at, but you are also harming yourself. Try to take a step back and calm down so that you can avoid making the situation worse.

13. “Now that there were only two of us, Rain still gave me a full vote. She never treated me like I was just a kid.”― Capricorn Anderson

14. “If she hadn’t adopted the hippie lifestyle, she would have made a terrific Marine drill sergeant.”― Capricorn Anderson

Capricorn Anderson gives his views on his grandmother Rain, who is a very strict woman. He says that if she hadn’t adopted the hippie lifestyle, she would have made a terrific Marine drill sergeant. This shows that he appreciates her discipline and feels that it would be an asset in a military setting.

It also reveals that he sees her as a kind of tough-love figure who is not afraid to give orders and expects them to be followed. This ultimately serves as a compliment, as it shows that he believes she has the strength and determination to get things done.

15. “Long dead. Malaria. They were with the Peace Corps in Namibia. They gave their lives for what they believed in.”― Rain

16. “That was when I started to worry about what was going to happen to me.”― Capricorn Anderson

Rain, the only caretaker of Capricorn, is injured seriously and has to be admitted to the hospital. Capricorn starts to worry about arrangements that will have to be made for him in Rain’s absence.

If you haven’t read Schooled yet, we suggest you go out and buy yourself a copy. The novel is exciting, humorous, and will keep you entertained from beginning to end. And if that’s not enough, the quotes alone are worth the price of the book. We hope you enjoyed this post, and if you have any suggestions for future blog topics, let us know!