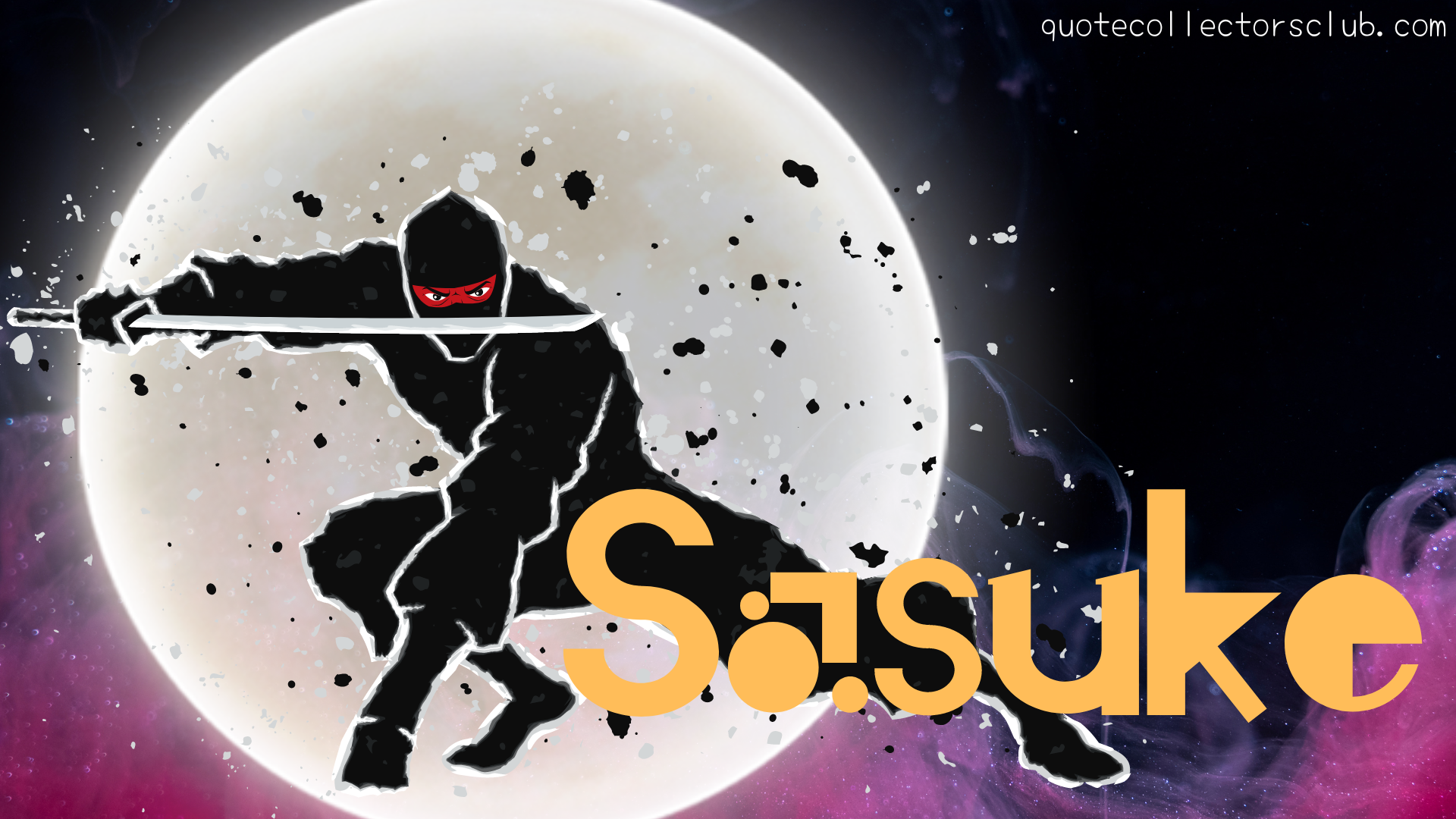 Sasuke Uchiha is one of the most popular characters in the Naruto manga and anime franchise. He is known for his dark and brooding personality, as well as his powerful skills in ninjutsu. In this article, we will take a look at some of the best quotes attributed to Sasuke Uchiha.

Sasuke is a try-hard. Seriously, the dude never gives up. He’s like a bingo machine that keeps hitting the same number over and over again until it runs out of balls. You just have to admire his tenacity, even if it is a little bit annoying. And, to be fair, he does have some impressive skills.

He’s a talented ninja, and he has the Sharingan, which allows him to copy other people’s moves. He’s also got some seriously powerful chakra, which comes in handy when he’s trying to perform Jutsu that is way beyond his normal capabilities.

All of that being said, he’s still kind of an arrogant jerk. He’s always looking down on other people, and he’s always trying to prove that he’s the best. But, despite all his flaws, you can’t help but root for him. After all, he is the underdog, and we all love an underdog story.

Here are the best Sasuke Quotes

Sasuke’s character has been met with a range of opinions from anime and manga publications. His excellent fighting abilities, story involvement, and rivalry with

Naruto Uzumaki has received some acclaim, but he was condemned as a stock rival in the manner of similar characters from other shōnen manga and for having a chilly personality. Let’s take a look at some of the best quotes attributed to Sasuke Uchiha.

Sasuke Uchiha is a popular character from the anime Naruto who is known for his famously aloof personality. In this quote, he is speaking to the main character, Naruto, and informing him that while Naruto may be considered special by others, Sasuke is even more so.

This declaration is typical of Sasuke’s arrogant persona, which often puts him at odds with his teammates and friends. However, despite his frequent boasting, Sasuke is a skilled ninja and an invaluable member of the team.

As such, his confidence is usually well-founded, and in this case, it serves as a reminder to Naruto that there is always someone better. In other words, even though Naruto may be special, there will always be someone who is even more so.

2. “I know the four of us have worked together. And for a while, I thought I could choose that path instead. But in the end, I’ve decided on revenge. That’s always been my purpose of living.”- Sasuke

3. “I will acknowledge that you are strong because you are someone who knows the same pain of loneliness as I do, and that pain makes a person stronger.”- Sasuke

4. “I’m going to the battlefield. I won’t let this village and my brother be wasted!”- Sasuke

And when he says, “I won’t let this village and my brother be wasted,” he means, “I’m going to turn my back on my home and everyone I love to become a powerful ninja.” Of course, in the end, Sasuke comes to his senses and realizes that his true friends are the people who have always been there for him.

5. “Having too many bonds causes one to lose focus–weakening their strongest wish, their greatest desire.”- Sasuke

6. “I hate a lot of things, and I don’t particularly like anything.”- Sasuke

Sasuke Uchiha is one of the most popular characters in the Naruto franchise, and it’s easy to see why. He’s a complex character with a dark past, and his cold demeanor is often taken as a sign that he’s simply not interested in anything.

However, the truth is that Sasuke hates a lot of things. It’s just that he doesn’t particularly like anything, either. In other words, Sasuke is a pretty negative guy. But what exactly does he hate? Well, first and foremost, Sasuke hates Naruto.

This is because Naruto is always trying to help him, even though Sasuke consistently rejects his help. Second, Sasuke hates the fact that he was never able to save his clan from extinction. And lastly, Sasuke hates himself for the choices he made in the past.

While we can’t completely relate to everything that Sasuke hates, we can certainly understand why he feels the way he does.

7. “My dream doesn’t exist in the future. It lies in the past. That’s the only place it exists.”- Sasuke

8. “While it’s true, I once desired destruction, and the only goal I had was revenge, things are different now.”- Sasuke

9. “No man chooses evil because it is evil; he only mistakes it for happiness–the good he seeks.”- Sasuke

The above quote by Sasuke Uchiha is a profound statement. It means that no one chooses to be evil; they just don’t know any better. They mistook evil for happiness. This is a very apt explanation for why people do bad things. They aren’t necessarily bad people; they just don’t know what they’re doing.

This could be due to a variety of factors, such as ignorance or simply not having the experience to know any better. Whatever the case may be, it’s important to remember that everyone is capable of making mistakes.

We should all try to be more understanding and forgiving because you never know what someone is going through in their life.

10. “Loneliness–you can’t compare it to what you feel after you get scolded by your parents.”- Sasuke

11. “I spared your life on a whim, nothing more. But this time, my whim is telling me to finish what I started.”- Sasuke

12. “The people that are hardest to love are usually the ones who need it the most.”- Sasuke

13. “Because that which can be destroyed can always be fixed and rebuilt.”- Sasuke

Sasuke Uchiha is a character who knows a lot about destruction. After all, his clan was destroyed when he was just a child, and he spent much of his life seeking revenge against the man who did it.

However, during his journey, Sasuke came to realize that destruction is not always permanent. Things can always be rebuilt, no matter how badly they’re broken. This is an important lesson for all of us to learn.

In life, we will experience a lot of heartbreak and loss. But if we remember that nothing is ever truly gone forever, we can find the strength to rebuild and start again.

14.  “Weaknesses? Listen, he was full of weaknesses. He was a good-for-nothing, but he pulled himself up with his strength and became Hokage.”- Sasuke

What Sasuke is saying is that you can’t truly appreciate peace unless you’ve experienced pain. This makes sense in a lot of ways. For example, people who have never been in war can’t understand what it’s like to live in a peaceful country.

They don’t know how amazing it is to be able to go outside without worrying about getting bombed. Or, on a smaller scale, someone who has never been in a relationship might not understand how wonderful it is to be in love.

They’ve never experienced the pain of heartbreak, so they can’t appreciate how great it feels to be in a healthy, happy relationship.

17. “What I have is not a dream because I will make it a reality.”- Sasuke

Sasuke is very determined, and this quote demonstrates that determination. He has faced many challenges in his life, but he has always persevered because he knows that his dreams are within reach. This quote inspires others to never give up on their dreams.

18. “If anyone wants to deny my way of living, I’ll kill everyone they ever cared about. Maybe then they’ll understand… a little bit of my hatred.”- Sasuke

Sasuke Uchiha is one of the most complex and interesting characters in the Naruto manga and anime franchise. His journey from avenging his family to trying to find his path has been fascinating to watch.

These 18 quotes show off some of the best aspects of Sasuke’s character and are sure to inspire you. Thanks for following along with us on this look at Sasuke Uchiha! Do you have a favorite quote? Let us know in the comments below!