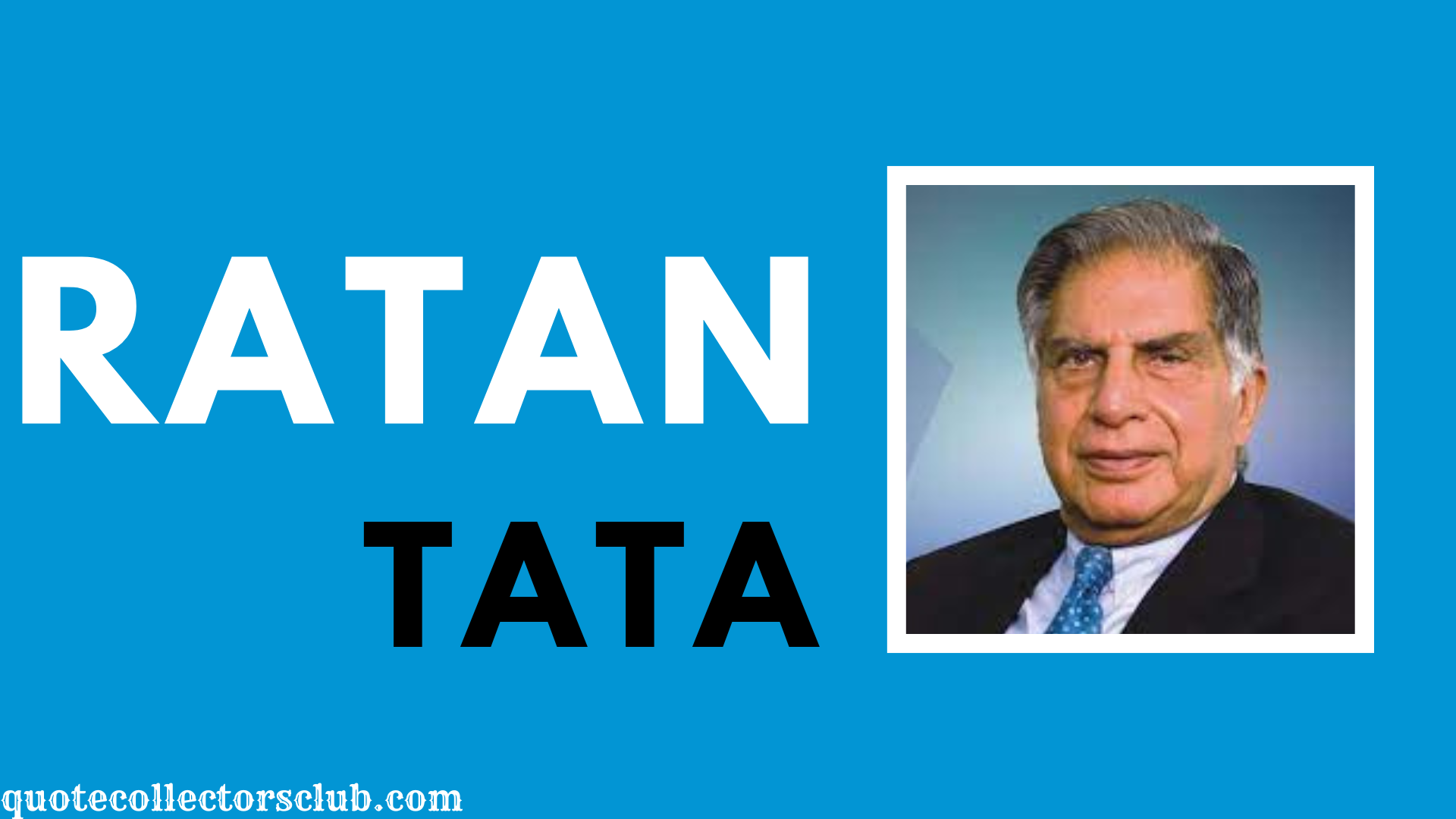 Ratan Tata is a name that needs no introduction in the business world. He is the chairman Emeritus of Tata Sons, one of India’s largest conglomerates. ratan tata is known for his visionary thinking and his passion for innovation. In this article, we will take a look at some of ratan tata’s best quotes and explore what makes him such an inspiration to entrepreneurs all over the world.

Ratan Tata is an Indian industrialist who chairs the Tata Group, a Mumbai-based conglomerate. He is also the former chairman of Corus Group, an Anglo-Dutch steel company. Born into a wealthy family, Tata went to prestigious schools in India and the UK before joining the family business in 1962. He quickly rose through the ranks, becoming chairman in 1991.

Under his leadership, the Tata Group expanded rapidly, making a series of high-profile acquisitions, including Tetley Tea, Jaguar Land Rover, and Corus Group. Today, the Tata Group is one of India’s largest and most respected businesses, with operations in more than 100 countries.

Ratan Tata has been a vocal advocate for education and healthcare reform in India, He is a truly inspirational figure, and his work is helping to transform India into a leading global economic power. Let’s  take a look at some of ratan tata’s best quotes:

Some things are just built to last. They’re tough, durable, and designed to weather any storm. Iron is one of those things. It’s strong, resilient, and almost impossible to break. And yet, even iron isn’t immune to the ravages of time. Over time, it will slowly start to rust and decay.

The same is true of people. We may be strong and resilient, but our mindsets can slowly start to erode in our lives. Just like iron, we can be slowly consumed by rust. Left unchecked, this rust can eventually destroy us from the inside out.

Ratan Tata is one of the most respected business leaders in India. In this quote, he echoes a sentiment that is often repeated in the business world: it is better to go alone than to try to do too much with too many people. This is because, when you are alone, you can move quickly and make decisions without having to consult with others or try to reach a consensus.

However, if you want to achieve lasting success, it is essential to build strong relationships and work together with others. This is because, while you may be able to achieve short-term goals on your own, it is much harder to sustain success over the long term without the support of others.

For example, you may be able to launch a successful start-up by yourself, but it will be much harder to scale the business and make it profitable without a team of dedicated employees. In short, while there are advantages to both working alone and working together, it is usually the latter that leads to lasting success.

4. “When you see in places like Africa and parts of Asia abject poverty, hungry children, and malnutrition around you, and you look at yourself as being people who have well-being and comforts, I think it takes a very insensitive, tough person not to feel they need to do something.”- Ratan Tata

5. “I don’t believe in taking right decisions. I take decisions and then make them right.”- Ratan Tata

Ratan Tata is emphasizing the importance of taking decisive action. He does not believe in waiting for the perfect opportunity or perfect conditions. Instead, he believes in taking action and then making adjustments as needed. This approach has served him well in business and life.

By taking decisive action, Ratan Tata has built a successful career and made a positive impact on society.

6. “Power and wealth are not two of my main stakes.”- Ratan Tata

7. “The strong live and the weak die. There is some bloodshed, and out of it emerges a much leaner industry, which tends to survive.”– Ratan Tata

The quote is suggestive of the idea that businesses go through a Darwinian selection process, in which the fittest companies survive while the weaker ones die off. This process can be brutal, with “bloodshed,” meaning that various stakeholders (e.g. employees, shareholders) may suffer losses.

However, the survivors are typically “leaner” and more efficient, meaning they are better equipped to compete in the long term. This quote is relevant to anyone who is running a business or considering starting one, as it highlights the importance of being able to adapt and evolve to survive.

Ratan Tata is an Indian business magnate and philanthropist, so he is well-placed to comment on this topic.

8. “One of the weaknesses of Indian industry is that in many areas.. like consumer goods.. it is very fragmented. Individually, the companies might not be able to survive. What is needed is a consortium of like companies in one industry, presenting a strong front to the multinationals. The Swiss watch industry did this.”– Ratan Tata

9. “Ups and downs in life are very important to keep us going because a straight line even in an ECG means we are not alive”- Ratan Tata

The ups and downs keep us going; they keep us alive. It’s the journey, not the destination, that matters. So don’t be afraid of the bumps along the way. Embrace them, learn from them, and keep moving forward.

10. “At Tatas, we believe that if we are not among the top three in an industry, we should look seriously at what it would take to become one of the top three players.. or think about exiting the industry”- Ratan Tata

11. “I would say that one of the things I wish I could do differently would be to be more outgoing.”- Ratan Tata

12. “I admire people who are very successful. But if that success has been achieved through too much ruthlessness, then I may admire that person, but I can’t respect him.”- Ratan Tata

13. “There are many things that, if I have to relive, maybe I will do it another way. But I would not like to look back and think what I have not been able to.”- Ratan Tata

14. “I have always been very confident and very upbeat about the future potential of India. I think it is a great country with great potential.”- Ratan Tata

India is a land of opportunity. With over 1.3 billion people, it is the second most populous country in the world. It is also one of the fastest-growing economies, with an annual growth rate of 7%. This growth is creating new opportunities for businesses, entrepreneurs, and workers.

The country is also home to a young population, with over 60% of the population under the age of 35. This demographic shift is creating a new market for products and services. In addition, India has a growing middle class with disposable income.

This class is increasingly interested in travel, education, and health care. As a result, India is poised to become one of the world’s leading economic powers. Ratan Tata, chairman of the Tata Group, is confident about India’s future potential.

He believes that the country has great potential and is well positioned to take advantage of new opportunities. Tata is one of India’s most successful businessmen, and his endorsement is a strong vote of confidence in the country’s future.

15. “Apart from values and ethics which I have tried to live by, the legacy I would like to leave behind is a very simple one – that I have always stood up for what I consider to be the right thing, and I have tried to be as fair and equitable as I could be.”- Ratan Tata

16. “Young entrepreneurs will make a difference in the Indian ecosystem.”- Ratan Tata

17. “I came seriously close to getting married four times, and each time I backed off in fear or for one reason or another. Each occasion was different, but in hindsight, when I look at the people involved, it wasn’t a bad thing what I did. I think it may have been more complex had the marriage taken place.”- Ratan Tata

18. “I have been constantly telling people to encourage people, to question the unquestioned and not to be ashamed to bring up new ideas, new processes to get things done.”- Ratan Tata

Ratan Tata is one of the most successful businessmen in India, and he is known for his passion for innovation. In the quote, he is urging people to be more proactive in their thinking and to challenge the status quo.

He believes that new ideas and processes are essential for progress and that people should not be afraid to bring them up. This attitude has helped him to achieve great things in his career, and it is something that we can all learn from.

When we question the unquestioned and are open to new ideas, we open up a world of possibilities. So let’s take Ratan Tata’s advice and encourage people to think outside the box. Who knows what we might achieve?

19. “I will certainly not join politics. I would like to be remembered as a clean businessman who has not partaken in any twists and turns beneath the surface and one who has been reasonably successful.”- Ratan Tata

20. “Take the stones people throw at you, and use them to build a monument”- Ratan Tata

This quote is about turning negativity into positive motivation. Everyone faces struggles and setbacks in life, but it’s important not to let these negative experiences define you. Instead, use them as fuel to drive you forward.

Let them make you stronger and more determined to achieve your goals. Use them as motivation to prove the naysayers wrong and build something great. Don’t let the haters keep you down – take the stones they throw at you and use them to build a monument of your success.

Ratan Tata is a business magnate, investor, philanthropist, and one of the most respected figures in Indian business. He has been at the forefront of some of India’s biggest commercial successes over the past few decades.

In addition to his success as an entrepreneur, he is also well-known for his wisdom and insights into business and life. We’ve collected 20 of Ratan Tata’s best quotes on everything from entrepreneurship to happiness – we hope you enjoy them! Do you have a favorite quote by Ratan Tata? Let us know in the comments below.