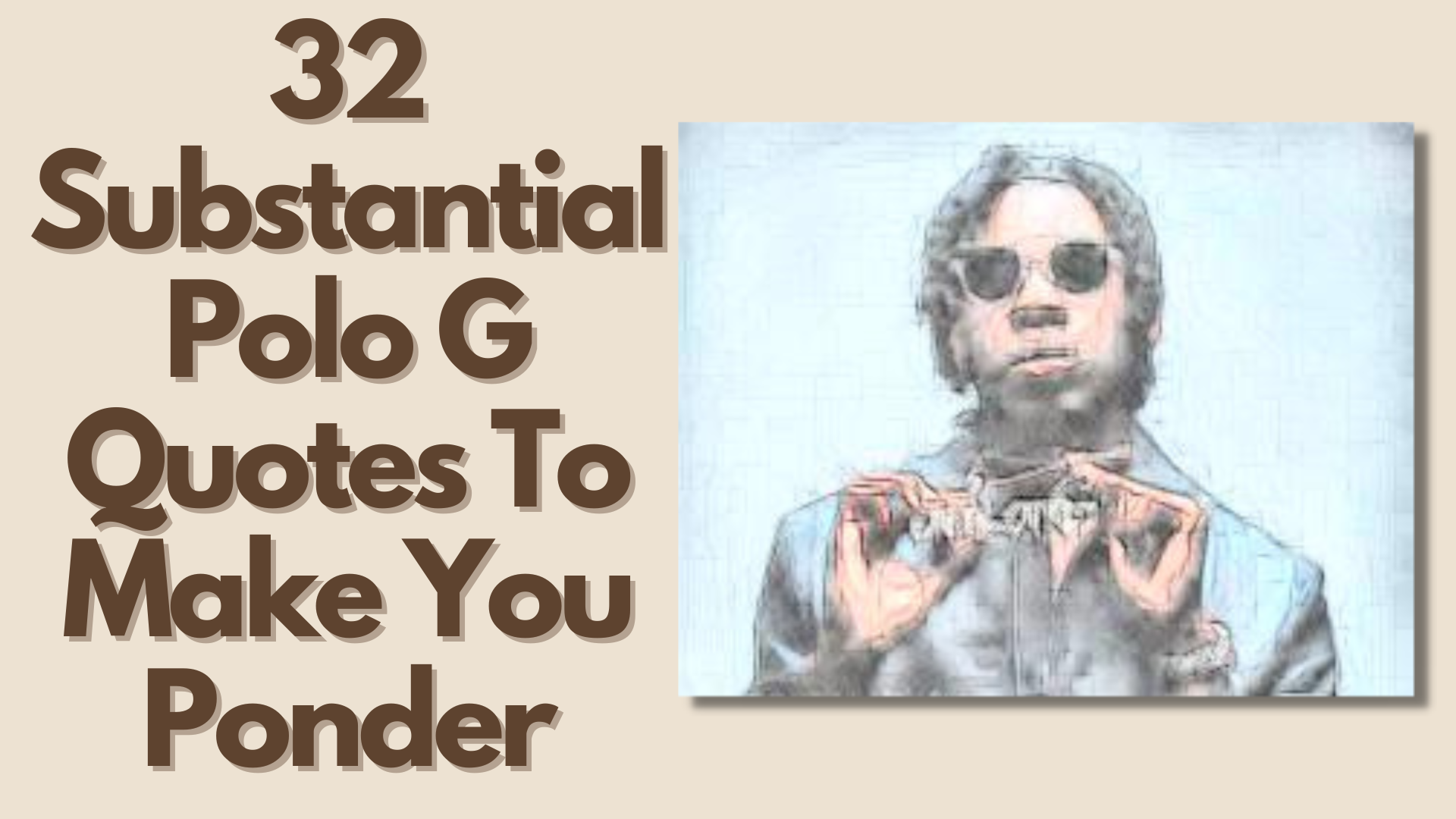 There’s no doubt that the American rapper Polo G is one of the most exciting new talents in hip-hop today. His lyrics are introspective and thought-provoking, and his music is both catchy and moving.

In this article, we’ll take a look at some of Polo G’s most famous quotes. These words of wisdom offer valuable insights into the mind of one of today’s most promising artists.

Polo G was born in Chicago, Illinois, on January 06, 1999. He grew up in the Marshall Field Garden Apartments, which was across from the Cabrini–Green Homes.

The first song of Polo was “ODA” which was released on YouTube, In 2018 he set up an account on SoundCloud and released the song “Gang With Me” which became very popular. He also released “Welcome Back” and “Neva Cared” later on, And got an amazing response from music lovers.

In 2019, Polo G released his debut studio album, Die a Legend. The album was a commercial success, reaching the top ten of the Billboard 200 chart.

Polo G’s music is often personal and introspective. In an interview with Genius, he explained that he tries to be honest in his music and that he doesn’t want to rap about things that he hasn’t experienced himself.

Polo G’s music is fresh and innovative, and he’s already caught the attention of some big names in the industry. He’s got a bright future ahead of him, and We can’t wait to see what he does next. Let’s try and understand him through his famous quotes:

It’s easy to feel like we have to be the ones who constantly put in the effort to help out others, especially when we see somebody struggling. But sometimes, we need to realize that it’s okay to ask for help too.

We can’t be strong all the time, and trying to act like we are can only make us feel more exhausted. It’s important to build a support system of friends and family who we can rely on when we’re feeling overwhelmed.

Knowing that there are people in our lives who care about us and are willing to help us through tough times can make all the difference.

So next time you’re feeling like you have to do everything on your own, remember that it’s okay to reach out for help. Polo G is right – we can’t always be the ones who have to help out everybody else. Sometimes, it’s okay to let others return the favor.

3. “I grew a strong passion for music. The more I did the music thing, it’s like I saw myself going far with it. I believed in myself.” ― Polo G

When Polo G says “I just want genuine support from the people I love,” he’s talking about more than just getting along with your family and friends. He’s talking about feeling like you belong somewhere, that you’re accepted for who you are.

We all crave that sense of connection and belonging, and it’s something that’s especially important during tough times. When we feel like we’re part of a supportive community, we can weather any storm.

That’s why it’s so important to build strong relationships with the people we love. When we know we have their support, we can face anything.

6. “I take full accountability for everything that happens in my life, even when I’m not inna wrong.” ― Polo G

7. “Gatta calculate every move before you make it.” ― Polo G

This quote by Polo G is a great reminder to always think before you act. It’s so easy to get caught up in the moment and make decisions without thinking about the consequences, but that’s often when we end up making mistakes.

By taking a moment to calculate our moves before we make them, we can avoid impulsive decisions that we might later regret. This doesn’t mean overthinking everything – sometimes it’s best to trust your gut instinct – but it’s important to be aware of the potential consequences of our actions before we take them.

In today’s fast-paced world, it can be easy to forget this wise advice, but if we can remember to pause and think before we act, we’ll be more likely to make choices that we won’t regret later on.

10. “Music is so important. Because in Chicago, it’s up to us to tell the stories nobody else will.” ― Polo G

Polo G’s life has been a movie ever since birth. It’s been lights, camera, action. From his humble beginnings in the Chicago projects to his rise to the top of the rap game, Polo G has always had a camera on him.

And he’s always been ready for his close-up. Polo G is one of the most exciting new voices in hip-hop, and his life story is the stuff of Hollywood legend. Born and raised in the tough streets of Chicago, Polo G has witnessed firsthand the violence and poverty that plagues his hometown.

But he’s also seen the beauty and resilience of his community. These experiences have shaped Polo G into the articulate and insightful artist that he is today.

His music tells the story of his life, and it’s a story that needs to be heard. So turn up the volume and enjoy the show.

12. “The worst thing a person can do is make another person feel worthless.” ― Polo G

13. “Some of the hardest challenges I’ve faced throughout life was really just like bein’ depressed, not feelin’ myself.” ― Polo G

14. “Everything was all good way back in the day, then whole hood really went wild.” ― Polo G

15. “I just wanted to be able to say that I raised my kids and my family around a better environment than I was brought up in.” – Polo G

Polo G was recently interviewed about his upbringing and what he wants for his own children. He spoke about how he was raised in a tough environment and how he wants to provide a better life for his own kids. Polo G is not alone in this sentiment. Many parents want to give their children a better life than they had.

This can manifest in different ways. Some parents want to provide their children with more opportunities, whether that means sending them to a better school or taking them on more enriching experiences.

Others want to provide a more stable home life, free from the chaos and instability that they may have grown up with. Whatever the specific goal, parents want to give their children the chance to thrive in a safe and supportive environment.

In Polo G’s case, he wants his children to grow up in an environment with more opportunity and less violence. By speaking out about his own story, he is helping to create the change that he wants to see in the world.

20. “In life, you always see the darkest days before the sunshine.” ― Polo G

Anyone who has ever faced a difficult situation can attest to the truth of this statement. When troubles come, they can seem insurmountable. Every day feels like a battle, and it’s hard to see any light at the end of the tunnel.

But even in the darkest of times, there is always some hope. Things will eventually get better, and the sun will shine again.

This is what keeps us going when things are tough. We have to believe that better days are ahead, or we would never make it through the tough times.

So when you find yourself in the darkness, remember that the sun is still there, waiting to shine again. Things will eventually get better.

22. “I’m pretty good at delivering my songs, but I just want to perfect the craft by creating melodies.” ― Polo G

23. “Depend on what you do today You gotta live with each decision that you chose to make.” ― Polo G

When Polo G says “another man’s success should never make you mad,” he’s absolutely right. It’s so easy to get caught up in comparing ourselves to others and feeling like we’re not good enough when we see someone else succeed.

But the truth is, there’s room for all of us to achieve our goals and live our best lives. When we focus on being happy for others instead of jealous, it not only makes them feel good but also opens up the possibility for us to create our own success.

So next time you see someone achieving something great, instead of getting angry or feeling down about yourself, celebrate their success and use it as motivation to keep pursuing your own dreams.

25. “God, please watch over me, and please forgive me for all my mistakes.” ― Polo G

26. “My writing process is I just reflect on situations that I’ve been through and just think about it as deeply as I can and then just translate it into lyrics.” ― Polo G

27. “Time & time again you got have to remind the world who you are. That can only become difficult if you forget.” ― Polo G

There’s something to be said for being somebody’s somebody. For always being there when they need you, no matter what. It’s a quality that not everyone has, but it’s one that can make all the difference in the world.

When you’re the somebody that somebody can always depend on, you become indispensable. You become somebody’s everything. And that’s a pretty great thing to be. Polo G knows this, and that’s why he says “I ain’t got nobody.

But I’m always there for somebody when they need me.” He may not have anyone in his life right now that he can rely on, but he’s determined to be that person for someone else.

That’s the kind of selflessness and loyalty that we should all aspire to. Because at the end of the day, it’s not about having somebody. It’s about being somebody for somebody else. And that’s what really matters.

30. “I have to be responsible with my character, my image, and my reputation.” ― Polo G

32.“Everything happens in real-time, so make decisions that are easy to live with.” – Polo G

Polo G’s words ring particularly true in today’s age of instant gratification. It’s so easy to get caught up in the moment and make impulsive decisions that we later come to regret.

Whether it’s responding to a hurtful message from a friend or spending too much money on a new outfit, we’ve all made choices that we wished we could take back. But as Polo G reminds us, it’s important to think before we act.

If we can take a step back and consider the consequences of our actions, we’re more likely to make choices that we can live with. In today’s fast-paced world, it’s more important than ever to pause and reflect before making any decisions.

So there you have it, 32 substantial Polo G quotes to make you ponder. Some are deep, some are painful – but all of them will get you thinking about life in a different way.

Whether you’re just starting out on your journey or looking back at where you’ve been, these quotes will help put things into perspective. What is your favorite quote? Let us know in the comments below!