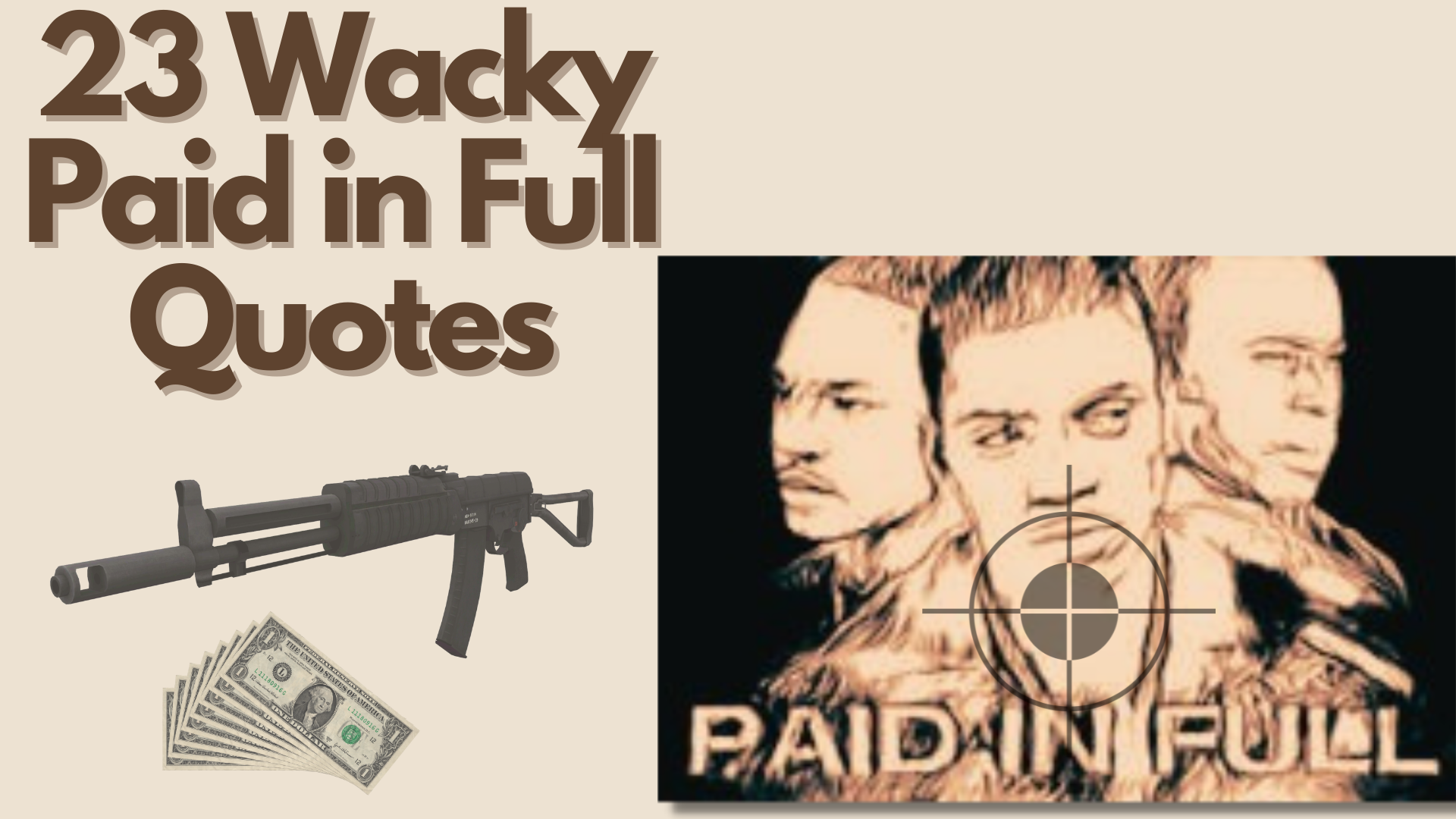 Did you know that the Paid in Full movie was based on a true story? The movie tells the story of three friends who become successful drug dealers in Harlem during the 1980s.

If you’re a fan of hip-hop, then you’ll love this movie. It contains some great quotes from some of your favorite rappers.

About the movie Paid in Full

Paid in Full is a 2002 American crime drama film directed by Charles Stone III. The film is based on the true story of three friends who become involved in the drug trade during the late 1980s and early 1990s.

The movie follows the lives of Ace (played by Wood Harris), Mitch (played by (Mekhi Phifer), and Rico (played by Cam’ron). Ace is a young man who dreams of making it big. Mitch is a loyal friend who sticks by Ace’s side. Rico is a flashy drug dealer who lives high life.

The three friends become involved in the drug trade and quickly rise to the top. But as they say, all good things must come to an end. Ace chooses not to continue with the drug trade and tries to leave it behind. Mitch understands and supports his decision. But Rico feels Ace should continue.

The movie ends with a very nice lesson: you can always choose to walk away from something, even if it’s lucrative.

Here are the top Paid in Full Quotes

“Paid in Full” is a 1987 single by American hip hop duo Eric B. & Rakim, released as the fifth single from their album Paid in Full. The title of the movie is borrowed from this song because it perfectly sums up the themes of the film.

The movie was produced by the American entrepreneur and record executive Damon Dash.

Paid in Full is a great film that tells an important story. Check out these 23 amazing quotes from the movie!

Ace believes that everyone will benefit from the illegal drug trade. While Ace’s argument may be convincing, the reality is that the drug trade is anything but fair. The illegal drug market is controlled by powerful cartels that violence and intimidation to maintain their power.

As a result, the majority of people involved in the drug trade are not “eating” or “getting this money.” They are suffering from addiction, poverty, and violence. In contrast, the cartels are making billions of dollars in profits. The drug trade is not fair or just, and it is certainly not something that “everybody can be happy” about.

2.  “Look at me. I’ve been shot in the head, baby. My body is different. I’m breathing differently. You understand what I’m saying?” – Ace

Ace is saying that the drug business is filled with fear and violence and that it does not give back anything positive in return. This is an important message for young people who may be tempted by the fast money and power of the drug trade.

Though the movie is set in the 1980s, Ace’s words are just as relevant today as they were then. In a world where the line between real and fake is often blurred, it’s important to remember that some things are not worth sacrificing for.

6. “I told myself, when I could breathe without a tube, I was gonna breathe deep.” – Ace

8. “Yeah, you know a n*gga got the dough. A n*gga could leave the league. But if I leave, the fans are still gonna love me, man?” – Mitch

What Mitch is saying is that if he were to leave the drugs business, his customers would still love him. This is a metaphor for how devoted fans can be to their favorite celebrities or athletes.

Even if they were to leave the entertainment industry or retire from their sport, their fans would still love them. This is because fans become attached to the person behind the celebrity persona or athlete.

They may admire their talent or accomplishments, but they also connect with them on a personal level. As a result, fans will continue to support them even if they are no longer active in the entertainment industry or sports world.

11. “Now there’s a new game. Us old players are gone. But you can see our story on music videos with prop guns and fake champagne.” – Ace

12. “You know my style, baby. It ain’t my style to be running around here getting all sweaty on the court, baby.” – Mitch

This quote is a great example of Mitch’s carefree attitude and confidence. Throughout the movie, Mitch is shown as a smooth operator who is always cool, collected, and in control.

He is someone who knows what he wants and how to get it. This line perfectly sums up Mitch’s attitude and style. It also serves as a great reminder that sometimes it’s better to just sit back and enjoy the ride.

14. “I sold you those drugs so that you could make money, you forgetful motherf*cker! You got high, so you f*cked up.” – Mitch

To hustle is to ardently or energetically pursue a goal with great enthusiasm. It is to actively seek out opportunities and grasp them with both hands. Mitch clearly has a passion for the drug game and he wants to continue earning money through illegal means.

He is excited about the possibility of making more money and he is willing to take risks to achieve his goals. While some people may see Mitch’s lifestyle as dangerous and destructive, he sees it as an exciting adventure. He is living life on his own terms and chasing his dreams.

17. “I just made enough money to bake biscuits for the projects.” – Calvin

20. See, the thing about the game is, the—don’t stop. You could be hurt, and it doesn’t matter. Business will still roll up on you. –Ace

The drug game is a ruthless business, and those who are involved must be constantly on the lookout for danger. In many ways, it is similar to a survival game, where the weakest links are quickly eliminated.

Those who stop, even for a moment, are at risk of being hurt or killed. As Ace says, “Business will still roll up on you.” This is a sobering reminder of the dangers of getting involved in the drug trade. Those who choose to enter this world must be prepared to face the consequences.

22. “Ay, yo, check here your man. Give him a thermometer, take his temperature or something, man.” – Rico

In today’s society, it is more important than ever for men to step up and take care of their families. With so many families struggling to make ends meet, it is vital that men take responsibility for providing for their loved ones.

The traditional gender roles have been turned upside down in recent years, and men have had to adapt to a new reality. In many cases, women are now the primary breadwinners in the family, while men are responsible for taking care of the home and children.

This change has been reflected in pop culture, with shows like Modern Family depicting unconventional families in which the father takes on a more nurturing role. While the traditional family dynamic is no longer the norm, Mitch’s statement still holds true: real men take care of their families.

Whether it means going to work every day to provide for them financially, or simply being present and involved in their lives, men have an important role to play in ensuring that their families thrive.

That’s all for our list of 23 paid-in-full quotes. We hope you enjoyed them! If you have any favorite quotes that weren’t on the list, please let us know in the comments below.