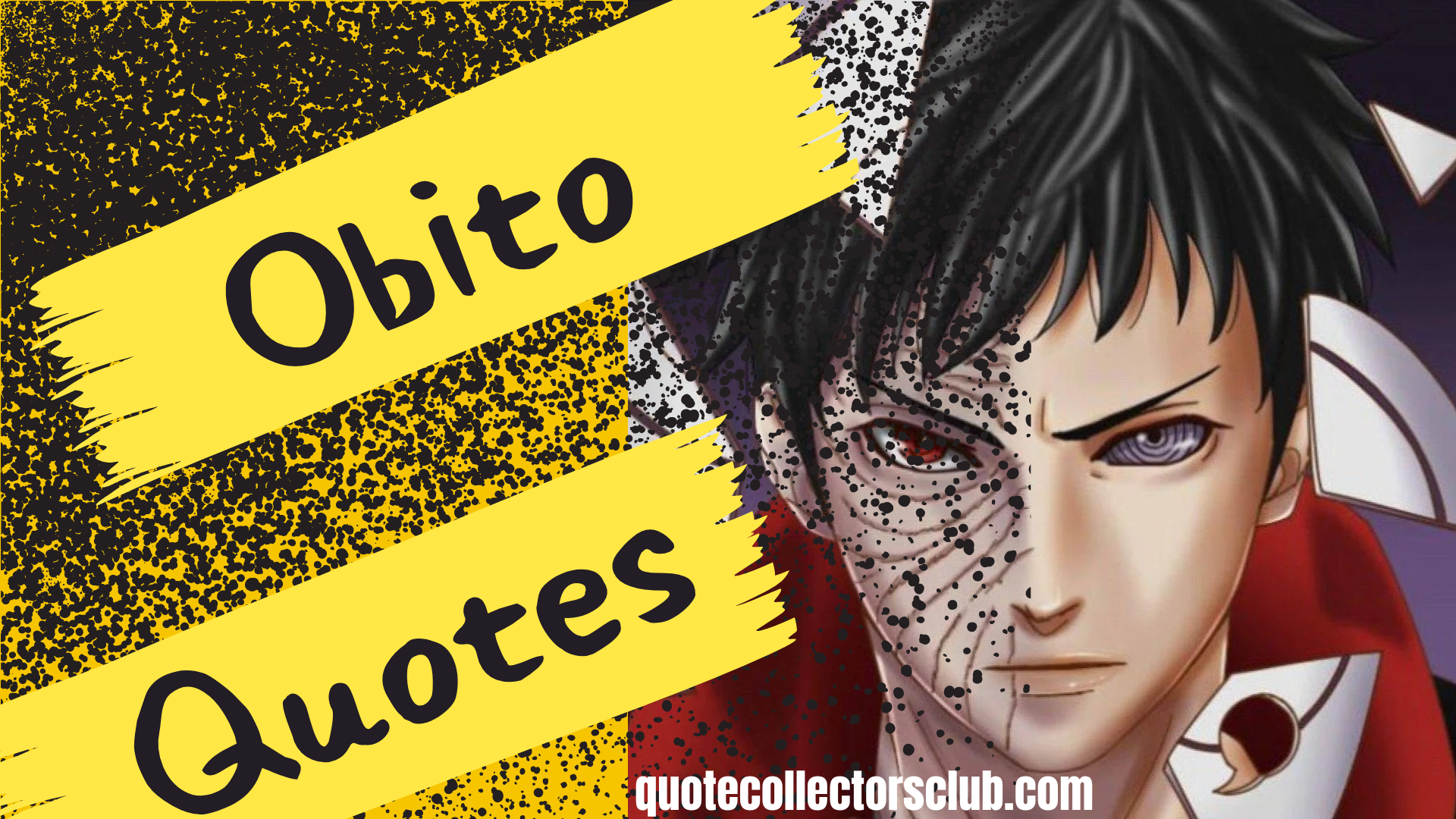 Obito Uchiha is an animated character in  Masashi Kishimoto’s manga “Naruto” Obito is the leader of the terrorist organization Akatsuki. He was introduced in the series as a young ninja who sacrificed himself to save his friends from a rival ninja group. Obito is known as one of the most legendary villains, As he is too powerful and brave; let us know him more by his greatest quotes.

Obito Uchiha’s love story is very tragic and is the most critical angle in the development of the character; Obito had a one-sided love feeling for Rin Nohara. Obito and Rin were childhood friends. Rin always supported & cheered Obito whenever he struggled, believing in Obito’s abilities and that he would become the most outstanding leader.

Obito was training under Madara Uchiha; Madara was an influential leader of the Uchiha Clan. He only wanted to complete his training and return to Konohagakure to be with Rin and his friends. Obito found out that Rin and Kakashi got ambushed; he tried to save Rin, but by the time Obito reached the war zone, Rin had sacrificed her life to save the village.

Rin’s death unleashed the beast within Obito, and he went violent and wild and killed many shinobi warriors. And after that, Obito lost all hope and reason to live in this world. He decided to join Madara’s group and support his plan.

Obito takes his last breath while saving Kakashi and Naruto from Kaguya; he is the most relatable character with a clear logic as to why he becomes the villain.

Naruto fans will never forget Obito’s character; He was the ultimate antihero of the series. People had a soft corner for him because he had lost someone he loved like crazy. Let’s explore some of his most amazing quotes :

1. “Look at me! There is nothing in my heart! I no longer feel pain.” – Obito Uchiha

Love is the most beautiful experience that happens to everyone at least once in a lifetime; Obito was in love with Rin, Although it was one-sided. But Obito lost everything when Rin died.

Obito had been through so much pain in his life, and he has finally reached a point where he no longer feels it. He became numb to the hurt. He build up so many walls around his heart that nothing can penetrate it anymore.

He doesn’t know if this is a good thing or a bad thing. On the one hand, He doesn’t have to feel the pain of loss and heartache anymore. But on the other hand, He also doesn’t get to experience the joy and happiness that comes with love. He is trapped in his own little world, where nothing can touch him.

But maybe that’s okay. Maybe it’s better this way. After all, what’s the point of feeling pain when there’s nothing you can do about it?

3. “I wish I had more time with everyone.”- Obito Uchiha

4. “Those who abandon their friends are worse than scum. If I’m going to be called a scumbag anyway, I’d rather break the rules! And if shinobi is not good, I will destroy this idea!” – Obito Uchiha

Abandoning your friends is one of the worst things you can do. It’s worse than being a piece of scum. When you abandon your friends, you betray their trust and leave them in a difficult situation. You’re also showing that you’re not a reliable person. If you abandoned your friends, they would be better off without you.

6. “Now I’ve finally realized that faking your name and letting others do everything for you is different from confiding something in your comrades.” – Obito Uchiha

7. “As soon as people know love, they run the risk of bearing hatred.” – Obito Uchiha

As soon as people know love, they run the risk of bearing hatred. This is because love and hatred are two sides of the same coin. They are both powerful emotions that can take over a person’s life. Love is often seen as a positive emotion, while hatred is seen as a negative emotion.

However, both emotions can have a strong hold on a person. Hatred can be just as damaging as love. It can destroy relationships, families, and even entire countries. when it is directed at someone or something. Love, on the other hand, has the power to heal wounds and build bridges between people. It is important to remember that love and hate are powerful emotions that should be used wisely.

8. “There is no peace in this world, this is the reality.” – Obito Uchiha

There is no peace in this world, this is the reality. Every day we are faced with choices that could lead to conflict. We see it on the news, read it in the paper, and experience it in our lives. It’s easy to become jaded and lose hope that peace is possible.

But we have to remember that peace is not the absence of conflict but the presence of justice. And as long as there are people fighting for justice, there will be hope for peace in this world.

9. “Wherever there is light, there will always be shadows. As long as there is a concept of winners, losers will also exist in the same way.” – Obito Uchiha

As long as there is light, there will always be shadows. In the same way, as long as there is a concept of winners, losers will also exist. This is because winners are determined by comparison, and in order for there to be a winner, there must also be someone who does not win.

While this may seem like a negative thing, it is actually essential for motivation. If everyone always won, no one would feel the need to strive to improve. The existence of losers creates a desire to improve and become a winner.

Without this desire to improve, society would stagnate. So in some ways, it is good that not everyone can be a winner always. It keeps people moving forward and striving to achieve more.

10. “There is no hope, the concept of hope is nothing more than giving up, a word that has no real meaning.” – Obito Uchiha

In a world that is full of darkness, it can be difficult to see the light. The concept of hope can be seen as nothing more than giving up, a word that has no real meaning. Hope is an intangible feeling, an emotion that is felt when we are faced with challenges and adversity. It is the belief that things will get better, even in the midst of darkness.

For some, hope is all they have to cling to in difficult times. Hope is what gets them through each day. It is what gives them the strength to keep going when they feel like giving up. Hope is what helps them see the light at the end of the tunnel.

Without hope, people would give up on their dreams and goals. They would stop fighting for what they believe in. They would lose faith in themselves and others.

11. “I am Obito Uchiha, and I will surpass you once I awaken my Sharingan!” – Obito Uchiha

13. “I have no interest in world affairs that will soon be over.” – Obito Uchiha

When the world is ending, what’s the use of keeping up with current affairs? It may seem like a pointless exercise, but there are several good reasons to stay informed about what’s happening in the world until the end.

First of all, it can help you make sense of what’s happening. When the world is coming to an end, things are going to be chaotic and confusing. You can better understand what’s happening and why by keeping up with the news.

Secondly, it can help you prepare for the end. Knowing what’s happening in the world can help you make better decisions about spending your time and resources.

Though it is often said that love is the root of all happiness, it can just as easily be the source of great pain. When two people are deeply in love, they will do anything for each other, even if it means making a great sacrifice. However, sometimes this same love can turn to hatred.

If one feels that they have made too many sacrifices and their partner has not reciprocated, they may resent them. This can lead to a downward spiral of negative emotions and, eventually, pain.

We hope you liked the above quotes, as they contain important lessons that can help you live a great life! After going through the quotes by Obito, we are now in a far better position to understand him; He has seen tragedy at a very early age, and due to that, he has developed a deep understanding of life. Obito knows that it is futile to think about certain things in life. He teaches us to prioritize friendship, never leave our true friends alone, and not bother about things we cannot control.