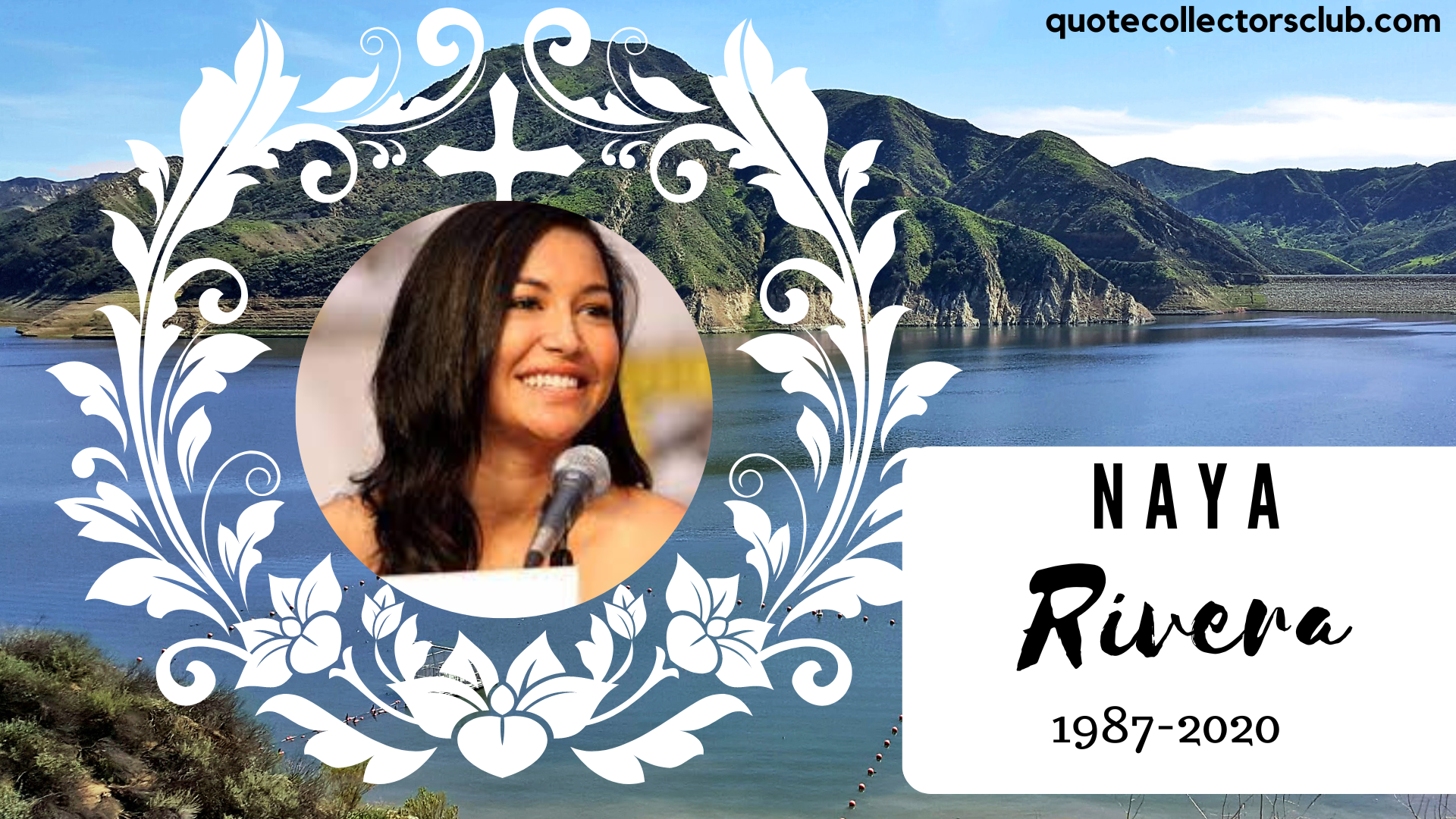 Naya Rivera was born on January 12, 1987, in Valencia, California. She was an American actress, singer, and model. Rivera is best known for playing Santana Lopez on the Fox television series Glee from 2009 to 2015. In this article, we will take a look at some of her best quotes!

Naya Rivera was an American actress, singer, and model. She began her career as a child actress and model, appearing in national television commercials before landing the role of Hillary Winston on the short-lived CBS sitcom The Royal Family at the age of four.

Rivera’s breakthrough role came in 2009 when she played Santana Lopez on the Fox musical comedy-drama series Glee. As a main cast member, she received widespread acclaim for her performance and was awarded a Screen Actors Guild Award in 2010.

She also played the leading role of Cat Valencia on the ABC comedy-drama series Devious Maids from 2013 to 2016. Throughout her career, Rivera had numerous other acting credits in film and television.

She also released an album called Sorry in September 2013. Rivera died on July 8, 2020, at the age of 33, after drowning in Lake Piru. Before departing from this world, she saved her son from drowning but couldn’t save herself.

Unfortunately, Rivera died in a drowning accident at Lake Piru in California. Her death sent shockwaves throughout the entertainment industry, and she was widely mourned by her fans and colleagues. Let’s remember her with some of her best quotes:

1. “I went into junior high feeling like a loser and a has-been. I didn’t want to come home after school and watch TV. I wanted to be on TV.”― Naya Rivera

So often, young people go through life feeling like they are not good enough or that they have missed their opportunity to achieve greatness. Naya Rivera’s words serve as a reminder that it is never too late to pursue your dreams. No matter how old you are or how much experience you have, there is always a chance to achieve success.

2. “Music is one of my greatest loves. I don’t think I would be able to live without music in my life. It’s very therapeutic when I sing, and it makes me feel like I’m escaping for a while.”― Naya Rivera

3.  “I walk around so mad at the world, but I’m really just fighting with myself.” ― Naya Rivera

The above quote is also relatable because a lot of people are their own worst enemy. People are always hardest on themselves, which can lead to them being mad at the world. Naya Rivera’s quote is powerful because it’s real and something a lot of people can relate to.

4. “I definitely knew that I loved acting from the very beginning. I was such a ham growing up. Wherever the camera was, I wanted to be right in front of it.”― Naya Rivera

5. “Butterflies can’t see their wings. They can’t see how truly beautiful they are, but everyone else can. People are like that as well.”― Naya Rivera

Naya Rivera’s quote is profound and insightful. Just like butterflies, we often cannot see how beautiful and special we are. We may not realize our own worth, but others can see it clearly.

Rivera’s quote reminds us to be grateful for the people in our lives who see us for who we truly are and appreciate us for our unique qualities. It is also a reminder to be kind to others because you never know what they may be going through.

We all have wings, even if we can’t see them. And sometimes, we need the help of others to see them too. Thank you, Naya Rivera, for this important reminder.

6. “By the end of elementary school, my acting career had totally dried up. At that age, you’re too old to play a cute kid, too young to play a hot teenager, and basically, nobody wants you.”― Naya Rivera

7.  “If you think back to your first love, you always remember them, and little things always remind you of them.”― Naya Rivera

Naya Rivera’s quote is so relatable and spot on. We’ve all experienced our first love and can attest to the fact that they’re always in the back of our minds, no matter how much time has passed.

It’s like they’re a part of us now, and we can’t shake them off. No matter who we end up with in the future, our first love will always have a special place in our hearts. And Naya Rivera is right; it’s the little things that remind us of them.

A certain song on the radio, a scent in the air, or even a movie can transport us back to that time in our lives when we were first falling in love. It’s amazing how such small things can have such a big impact on our lives.

8. “If I had a dollar for every time my mother told me god had a plan, I’d probably buy a new Prada bag.”― Naya Rivera

9. “I think you’re finally an adult when you can look at your parents as people going through their own shit rather than just seeing them as unfeeling tyrants here to make your life miserable.”― Naya Rivera

Naya Rivera’s quote speaks to the maturity that comes with age. As children, we see our parents as all-knowing and omnipotent beings, but as we grow older, we realize that they are just like us – fallible human beings who are struggling to get by.

This realization can be liberating, as it allows us to let go of any resentments we may have been carrying towards them. It also allows us to build a more meaningful relationship with our parents based on empathy and understanding.

Naya Rivera’s quote is a reminder that maturity is not about age; it’s about seeing our parents as complex individuals with their own issues and struggles.

10. “So yeah, being a mom changes things and makes you feel different in a lot of ways, but for me, the big one is this: I’m braver. I’ve never been afraid of being an open book and telling it like it is, but now I can say, with 100 percent confidence, that zero fucks are given anymore.”― Naya Rivera

11. “Never feel bad about cutting someone out of your life—sometimes that’s the only option. When you hang out with people who are true friends, you come away feeling lighter, more inspired to work hard, give love, and take care of yourself.”― Naya Rivera

12. “So when life gives me lemons, I say fuck it and drink champagne.”― Naya Rivera

And she’s absolutely right! How can you hope to be a good friend to someone else if you’re not taking care of yourself first? If you’re running on empty, you won’t have anything left to give to your friends. You need to make sure you’re taking care of your own needs before you can effectively take care of someone else.

15. “Be kind to people, do the best that you can do, and don’t compromise yourself for anyone else, and you’ll end up being the best person, trust me.”― Naya Rivera

16. “Your life doesn’t have to be perfect for you to be proud. In fact, I think it’s the opposite: the more imperfect your life has been, the prouder you should be because it means you’ve come that much further and also probably had a lot more fun along the way.”― Naya Rivera

17. “Deep down, I knew I had more in me. If I wasn’t living up to my potential, I had no one to blame but myself. I couldn’t even blame my dad for making me pay rent.”― Naya Rivera

18. “There are always going to be things you don’t like about yourself or reasons to compare yourself to others.” ― Naya Rivera

Naya Rivera was absolutely correct in her statement; We live in a society where we are constantly bombarded with images and messages that tell us we need to look a certain way, have certain things, or be a certain weight. It’s easy to get caught up in comparing ourselves to others and feeling like we don’t measure up.

However, it’s important to remember that everyone is unique and beautiful in their own way. Additionally, the comparison is often the thief of joy. Instead of focusing on what we don’t have or what we wish we could change about ourselves, let’s focus on the things that make us special and the moments that make us happy. Life is too short to spend time worrying about the things we can’t control.

19. “It’s good to get your mistakes out of the way early—as long as you learn from them!”― Naya Rivera

20. “Success is not defined by what the people around you want. It is based on what you want for yourself.”― Naya Rivera

This is an important perspective to keep in mind because it’s all too easy to get caught up in other people’s expectations and lose sight of your own goals. When you stay focused on what you want, you’re more likely to achieve it.

So next time you’re feeling lost or uncertain, remember Naya’s wisdom and focus on what you want for yourself. You may just be surprised by how far you can go.

21. “I don’t trust people who claim to like everyone because, really, how is that possible? If that is true, then you must not have any standards. If you care about your life, then there are going to be certain people you don’t want in it.”― Naya Rivera

What an amazing life Naya Rivera had! She was a talented actress, singer, and model who achieved great success in her field. Her quotes provide inspiration and wisdom for us all, and we can only hope to achieve even a fraction of what she accomplished in our lives.

Thanks for following along on this journey through the best 21 quotes from Naya Rivera. Do you have any favorite quotes that we missed? Let us know in the comments!