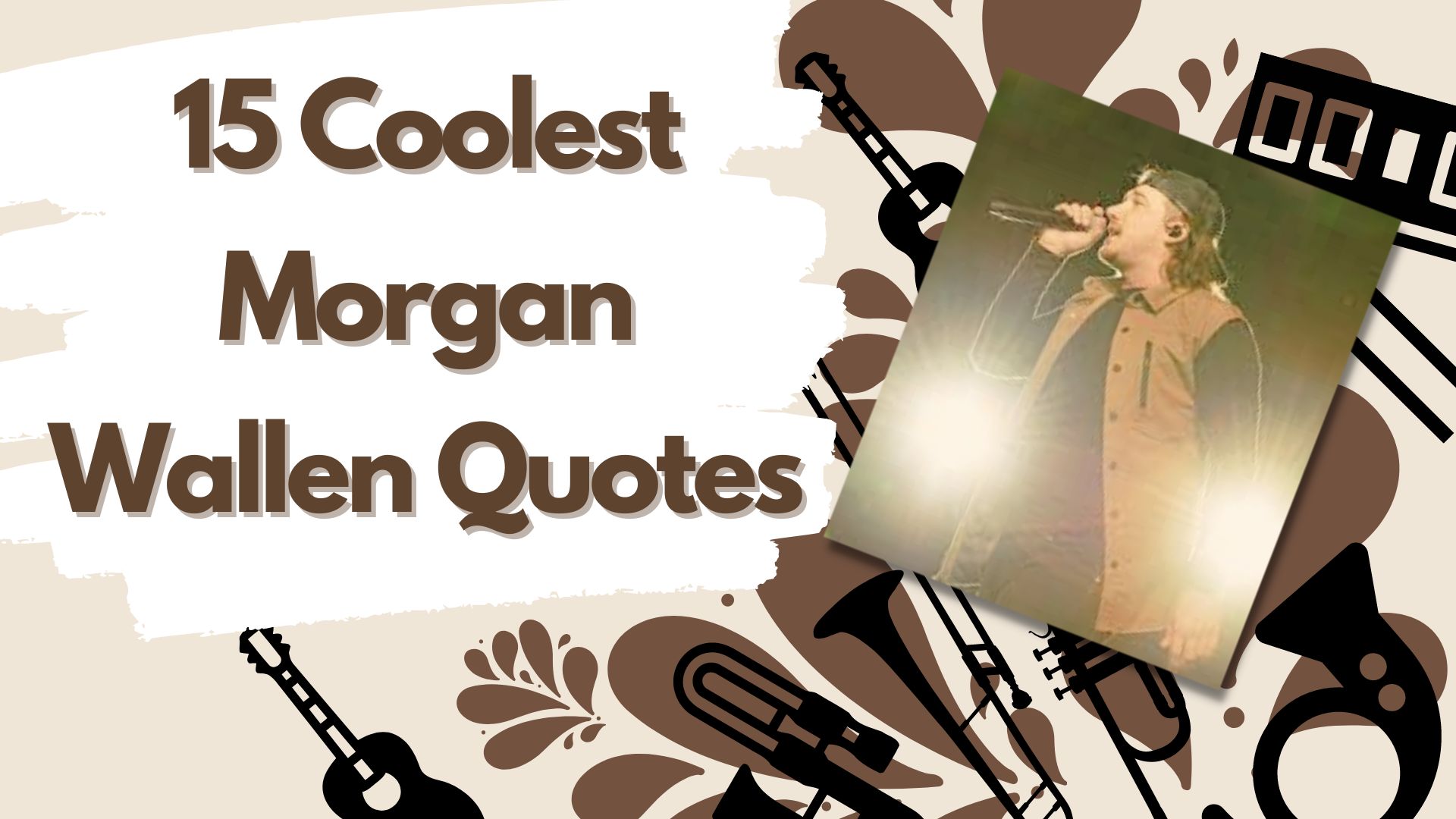 There’s no doubt that Morgan Wallen is one of the most talented singers in country music today. His soulful voice and songwriting skills have won him legions of fans, and he’s only just getting started! In this article, we’ll take a look at some of Morgan Wallen’s best quotes.

Whether you’re a fan of his music or not, you’re sure to find something interesting in these quotes!

Wallen was born in Sneedville, Tennessee, on May 13, 1993. His father was a pastor, and his mother was a teacher. He has two sisters. Wallen attended Gibbs High School in Corriton, Tennessee.

In 2014, Wallen auditioned for the sixth season of The Voice. He originally joined Usher’s team but later switched to Adam Levine’s team. He was eliminated in the playoffs but later signed to Panacea Records. In 2015, he released his debut EP, Stand Alone.

In 2016, Wallen signed to Big Loud and released his debut album, If I Know Me, in 2018. The album reached the top of the Billboard Top Country Albums chart and received positive reviews from critics. Wallen has been praised for his traditional country sound and has been compared to artists such as Hank Williams Jr. and George Strait.

Wallen has continued to release successful albums and singles, cementing his place as one of the top country artists today. Let’s hop on the bus and take a look at some of Morgan Wallen’s best quotes!

1. “I just want to make music people like.”– Morgan Wallen

In a recent interview, Morgan Wallen talked about his approach to making music. “I just want to make music people like,” he said. “I don’t want to get too caught up in what’s popular or what’s cool.

I just want to write songs that people can relate to.” It’s a refreshing attitude in the age of manufactured pop stars and carefully crafted personas. For Wallen, it seems that making honest, relatable music is more important than chasing trends.

And judging by the success of his latest album, it’s a formula that is resonating with fans. In a time when so much music feels fake and calculated, it’s nice to see an artist who is just focused on making songs that people will enjoy.

Hopefully, more artists will follow Wallen’s lead and start putting their own spin on what it means to be successful.

2. “I just want to be able to do it all just because that’s what life is.”– Morgan Wallen

3. “I know that I come from a place of small-town roots and of humble beginnings and I try to keep those things in my songs – just stuff that I know people like me can relate to.” – Morgan Wallen

What sets Wallen apart from other country stars is his willingness to break the mold. In a genre that has long been associated with conservative values, Wallen has embraced his rebel side, infusing his music with a sense of rebelliousness and defiance.

And while he may not be mean, he’s not afraid to speak his mind, whether it’s calling out hypocritical politicians or taking shots at the music industry. For Morgan Wallen, being a rebel is about staying true to yourself, no matter what anyone else thinks. And that’s something we can all aspire to.

5. “I don’t have any answers, but in my personal opinion, I’m a person that has faith and I believe that a lot of people have neglected God.”– Morgan Wallen

6. “I can speak for everybody in saying we’ve all been through a breakup to where you didn’t want it to be over.”– Morgan Wallen

If you’ve ever gone through a breakup, you know how tough it can be. It’s like a piece of your heart has been ripped out, and you’re just left with this big gaping hole. You try to fill the void with anything and everything, but nothing seems to work.

You go through the motions of your day-to-day life, but everything just feels so empty and meaningless. You might even start to question if you’ll ever feel happy again. But then, one day, out of nowhere, you meet someone new. And suddenly, all those broken pieces start to come back together.

You start to feel whole again. You remember what it feels like to be truly alive and happy. So even though breakups are tough, they don’t last forever. There’s always hope for a new beginning. Thanks, Morgan Wallen, for speaking for all of us!

We all have a vision of who we want to be in life. For some of us, that person is kind and patient, always putting others first. For others, we aspire to be successful and accomplished, achieving great things both professionally and personally.

However, the reality is that none of us are ever going to be the perfect version of ourselves that we strive for. We will always have flaws and make mistakes. But that doesn’t mean that we should give up on trying to be better people.

As Morgan Wallen said, “I’m by no means the person that I strive to be. I don’t think anyone is the person that we strive to be. But I try.” So even if we never achieve our idealized version of ourselves, we can still take comfort in knowing that we’re doing our best. And in the end, that’s really all anyone can ask for.

9. “I think it takes a little bit of time for people to take you seriously.”– Morgan Wallen

11. “There’s a lot of things we go through and we don’t even know why… At the end of the day, God has a purpose and a plan for you, and that’s kind of how I take that.”– Morgan Wallen

In life, we go through a lot of ups and downs. Sometimes we don’t even know why things are happening the way they are. We question everything and everyone. We feel lost and alone.

But at the end of the day, we have to remember that God has a purpose and a plan for us. We may not always understand what is happening, but we have to trust that everything happens for a reason.

And even though it may be tough to get through tough times, we have to remember that there is light at the end of the tunnel. So when life gets tough, just hold on tight and keep moving forward because God has great things in store for you.

12. “I believe in God. I believe that He’s real and I believe He has control over a lot of things and I think throughout history there has been a lot of countries that have turned their back on Him and the result is not great.”– Morgan Wallen

13. “You never know the plan. You never know what’s going to happen. We are not even promised tomorrow. I just try to focus on one day at a time.”– Morgan Wallen

We all have our own plans and dreams for the future. But as Morgan Wallen says, “You never know the plan. You never know what’s going to happen.” Life is full of surprises, and we can’t always predict what will happen next.

That’s why it’s so important to live in the present moment and enjoy each day as it comes. One day we might be healthy and happy, while the next day, we may be faced with illness or tragedy.

That’s why it’s so important to appreciate each moment because we never know what might happen tomorrow. So let’s focus on today and make the most of it. Who knows what tomorrow will bring?

14. “I know it takes more than one album to stay around.” – Morgan Wallen

Although it may seem like a simple task, staying relevant in the music industry is no easy feat. With new artists emerging every day, it takes hard work and dedication to maintain a place in the spotlight.

For Morgan Wallen, this means continuing to produce quality music that resonates with his fans. In a recent interview, Wallen spoke about his plans for the future, saying, “I know it takes more than one album to stay around.”

He went on to discuss his desire to experiment with different sounds and styles while still staying true to his roots. With a strong work ethic and creative vision, there’s no doubt that Morgan Wallen has what it takes to stay at the top of the country music scene for years to come.

15. “I feel like that’s my foundation and my roots, what I believe in – no matter where life takes me, I’ll always be the same guy and same person at heart.” – Morgan Wallen

That’s a wrap on our introduction to Morgan Wallen! We hope you liked the quotes. If you have any suggestions for future posts or want us to cover a specific topic related to Morgan Wallen, let us know in the comments below.

For now, be sure to check out some of his latest music and keep an eye out for upcoming tour dates. Thanks for reading!