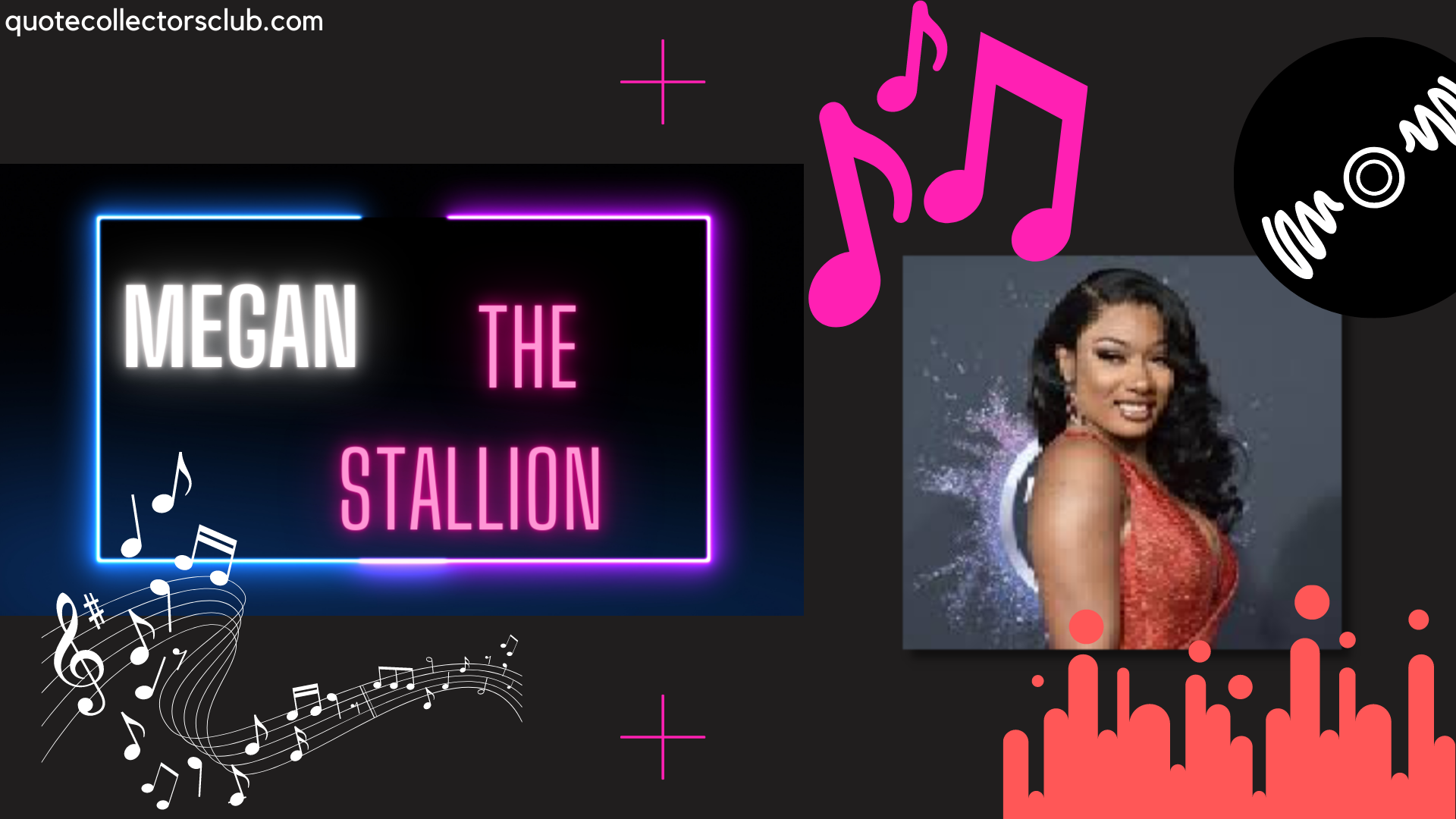 There’s no doubt that rapper Megan Thee Stallion is one of the most talented and outspoken artists out there today. Her lyrics are raw, honest, and powerful- and she isn’t afraid to speak her mind. In this article, we’ll take a look at some of her best quotes. Whether you’re a fan of her music or not, you have to admit that she has a lot of wisdom to share!

Megan Thee Stallion is an American rapper, singer, and songwriter. She was born on February 15, 1995, in  San Antonio, Texas.

MeganTheeStallion began writing rap songs at the age of 14. Megan released her first single, “Like a Stallion,” in April 2016, and this was followed by her first mixtape, Rich Ratchet.

MeganTheeStallion is one of the most exciting new voices in hip-hop, and she is quickly becoming one of the biggest stars in the rap game. Time named her one of the world’s most powerful in 2020, naming her one of the 100 most influential people in the world on their annual list.

In September 2019, Megan Thee Stallion signed a management agreement with Roc Nation. She starred in a horror series, Hottieween, in October 2019. In the same month, she performed an NPR Tiny Desk Concert at the Tiny Desk Fest.

Well, Megan is a very busy personality; let’s find out what MeganTheeStallion has to say through her quotes!

1. “I feel like, when people realize that they are the only person they need to impress, everybody’s life will be a lot smoother.” — Megan Thee Stallion

Too often, people get caught up in trying to impress others and meet their expectations. This can be exhausting and frustrating, especially if you’re not getting the validation you’re seeking.

But at the end of the day, the only person you need to impress is yourself. Once you realize this, life becomes a lot simpler and more enjoyable. You can focus on your happiness instead of worrying about what others think of you. So take a page out of Megan’s book and start living for yourself!

2. “We never show up together. But I text him when I’m ready to go.” — Megan Thee Stallion

3. “You don’t have a lot of women doing things for women, so when I’m rapping, I gotta talk all this mess so the women can feel as confident and empowered as the men.” — Megan Thee Stallion

Megan Thee Stallion is one of the most popular rappers in the world, and she is known for her empowering lyrics. In a recent interview, she explained that she raps about “all this mess” so that women can feel as confident and empowered as men.

This is because there are not many women in the rap industry who are doing things for other women. Megan Thee Stallion is changing the game by making music that empowers women and makes them feel confident. She is an inspiration to all women, and her quotes show that she is a powerful force to be reckoned with.

6.  “They wanna know ‘bout me. They say, “Tell me your story.” Only thing you need to know is I’m in love with the money.” — Megan Thee Stallion

Megan Thee Stallion is one of the most exciting new artists in the hip-hop world, and her breakout hit “Money” perfectly encapsulates her unique style and attitude. In the song, Megan brags about her wealth and success, but she also makes it clear that she’s not just in it for the money.

Rather, she’s in love with the money, and she wants her listeners to know that she’s going to continue working hard to get more of it. It’s a refreshingly honest take on the rap game, and it’s one of the many reasons why Megan Thee Stallion is quickly becoming one of the biggest stars in the genre.

7. “Once you really know yourself, can’t nobody tell you nothing about you.” — Megan Thee Stallion

8. “That’s what I feel like my music represents – having no limits or restrictions.” — Megan Thee Stallion

This quote speaks to Megan’s fearlessness and her commitment to speaking her truth. She is unafraid to push boundaries and challenge norms. Her music is a reflection of this rebellious spirit.

It is powerful and liberating, and it inspires others to embrace their uniqueness. When you listen to Megan Thee Stallion, you are reminded that there are no limits to what you can achieve. So go out there and be your unstoppable self!

9. “Everything you ever told me could have been a lie. We may never have been in love.” — Megan Thee Stallion

10.  “My momma wasn’t a weak person, and she wasn’t a complainer. So I don’t wanna be like that.” — Megan Thee Stallion

This quote from Megan Thee Stallion sums up an important life lesson – that we should all strive to be strong and resilient, just like our mothers. Moms are usually the unsung heroes of our lives, always there for us but rarely getting the credit they deserve.

But as Megan Thee Stallion points out, we should aspire to be like our moms – strong, capable women who don’t complain and get on with the business of life. It’s a great reminder that we all have someone to look up to and that we should celebrate the women in our lives who have helped us become the people we are today.

11. “When you being real, you ain’t worried ’bout who fake.” — Megan Thee Stallion

12. “Being a rapper and still trying to pursue an education is really overwhelming sometimes.” — Megan Thee Stallion

13. “I just want to be like a good example to somebody in the future.” — Megan Thee Stallion

Megan Thee Stallion is known for her powerful lyrics and fearless attitude. In this quote, she speaks about her desire to be a good role model for others. This is something that Megan is passionate about, and she often uses her platform to inspire young people.

For Megan, being a good example isn’t just about being successful or having material things. It’s about being authentically yourself and staying true to your values. Megan wants to show others that it’s possible to achieve your dreams while staying true to who you are.

This is an important message and one that we can all learn from. Thanks, Megan, for being such a great role model!

15. “You find out about me because of my music, and that’s how I want to keep it.” — Megan Thee Stallion

16. “The main goal of my music is to make people feel strong and confident.” — Megan Thee Stallion

Megan Thee Stallion is one of the most exciting new voices in hip-hop, and she is quickly making a name for herself with her empowering lyrics and confident attitude. In a recent interview, Megan explained that her music is all about making her listeners feel strong and confident.

“I want people to walk away from my music feeling like they can do anything,” she said. “I want them to feel like they’re the saddest bitch in the room.” It’s clear that Megan is using her platform to inspire others, and she is quickly becoming a role model for young women everywhere.

With her powerful lyrics and unapologetic confidence, Megan is showing the world that there is no limit to what you can achieve if you believe in yourself.

17. “My music is me letting the world know how confident I am in myself, and me basically telling other women – and guys – how confident and how comfortable I believe they should be.” — Megan Thee Stallion

Megan Thee Stallion is one of the most exciting new voices in music today. Known for her raw, unapologetic lyrics and catchy hooks, she has quickly become a force to be reckoned with. This quote perfectly encapsulates her persona.

She is unafraid to speak her mind and very little can embarrass her. This confidence is one of the things that makes her so appealing to her fans. It’s also what sets her apart from other artists in the industry.

In a world where so many people are afraid to be themselves, Megan Thee Stallion is a breath of fresh air. And we can’t wait to see what she does next.

American rapper Megan Thee Stallion is one to watch in the music industry. With her confident and unapologetic lyrics, she is inspiring a whole new generation of young women.

We’ve collected some of our favorite quotes from her so far, and we hope you enjoy them too. If you have any suggestions for additional quotes, let us know!