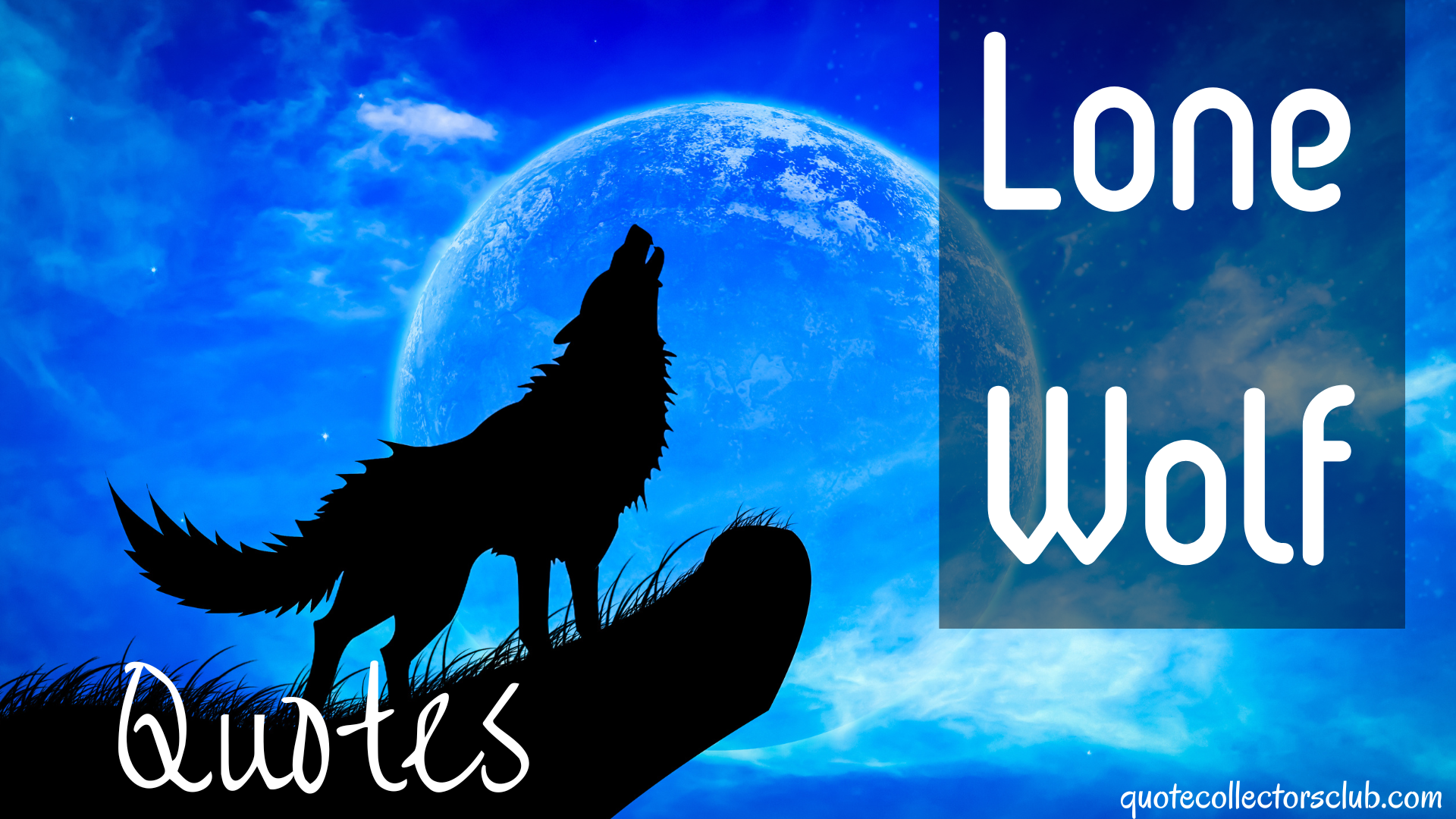 They’re independent, self-sufficient, and fiercely determined. They don’t need anyone else to help them achieve their goals, they can do it independently. These lone-wolf quotes inspire you to go your own way and achieve great things!

About being a Lone-Wolf

Being a lone wolf is not for the faint of heart. It requires immense levels of strength, determination, and an unflinching will to survive in the wild on your own. This path is not for everyone, but those who choose it must be brave and resourceful if they are to make it through even the toughest of challenges.

At first, being a lone wolf can be both thrilling and terrifying. The sense of freedom that comes with living out in nature, untethered by the rules and structures of society, is exhilarating. But there are dangers lurking in every corner, from harsh weather conditions to hungry predators. Only those who are able fearless and capable will be able to overcome these obstacles and continue down the road less traveled.

Yet even if you survive all the trials that come your way, you may still feel lost at times. After all, when you’re alone with no one else to rely on or confide in, it’s easy to lose sight of your purpose for being a lone wolf in the first place. To truly thrive in this unforgiving yet beautiful world, it’s important to stay grounded at all times and remember what makes you unique, whether that’s an innate talent or just a razor-sharp mind that lets you read the land like an open book.

In short, being a lone wolf takes great courage and perseverance but also intense self-reflection and understanding of one’s own abilities and motivations. So if this sounds like something you want to pursue, then strap on your boots and head out into the wilderness because only there will you find true freedom.

Here are the best Lone-Wolf Quotes

True lone wolves have no fear of falling because they know that great accomplishments rarely come without risk or failure. Let’s look at some lone wolf quotes that inspire you to take the less-traveled path and achieve great things:

1. “The tiger and the lion may be more powerful. But the wolf does not perform in the circus.” — Earl Derr Biggers

Growing up, most of us are taught that the lion and the tiger are the apex predators of the animal kingdom. They are fast, fierce, seemingly unstoppable, seemingly invincible, even. But while these large carnivores may seem like unstoppable forces, in reality, they often lack what is arguably one of the greatest strengths of the wolf: adaptability.

The wolf is a survivor; it thrives in a wide range of environments and is immensely resourceful when it comes to finding food or shelter. On the other hand, the lion or tiger depends on more specific conditions to survive; their range is limited by habitat availability, and their diet tends towards prey that can be easily hunted down rather than foraged for.

3. “People who hate solitude have very low standards when it comes to the company they keep.” ― Mokokoma Mokhonoana

4. “Life is a lone wolf, scratching out a living with teeth and claws and a heart of stone.” ― Dan Wells

5. “A lone wolf doesn’t tread paths its ilk leaves; it makes its own footprints in the snow.” — Savas Mounjid

6. “Wolves don’t lose sleep over the opinion of sheep.” — Aristotle

Contrary to what many people believe, wolves are intelligent and calculating animals. They know exactly when to strike and where to target their prey, and they do not let the opinions of others deter them from their goals. In fact, it has been said that wolves don’t lose sleep over the opinions of sheep, implying that these predators are unafraid of those who are meek or weak.

Indeed, this quote reflects the fierce nature of wolves and the boldness with which they pursue their targets. Whether they are stalking an isolated sheep in a field or attacking a herd of cattle in a pasture, wolves are always determined to get what they want. And perhaps most importantly, they never allow anyone, including sheep, to stand in their way.

7. “The lone wolf is stronger than the pack and so it survives.” — Michael Alvear

8. “One beast and only one howls in the woods by night.” ― Angela Carter

9. “A true lone wolf wishes not to lead the pack, but to lead itself.” — Eric Kay

1. “I never found a companion that was so companionable as solitude.” — Henry David Thoreau

3. “In the end, it is our defiance that redeems us. If wolves had a religion – if there was a religion of the wolf, that it is what it would tell us.” ― Mark Rowlands

4. “The lone wolf is the wisest animal because he lives alone and has no opinion about anything.” — Unknown

The quote above suggests that true wisdom lies in living alone and having no opinion about anything. After all, by being alone and withdrawn from the rest of society, the lone wolf is removed from the complexities, pressures, and distractions of everyday life.

Freed of social obligations and conventional expectations, this solitary creature can just exist in its own thoughts and observations without any interference or judgment. And while it may seem like an unfulfilling way to live to some, others may see it as a path to greater understanding and clarity.

In this sense, the quote suggests that perhaps there is truth in this age-old saying: sometimes it’s necessary to step away from the noise of others to hear our own voice. After all, if you have nothing but your own thoughts rattling around in your head all day long, you can begin to get a better sense of who you truly are, what your goals are, what you want out of life, and how best to achieve those aims.

But whether one views this approach as wise or not depends entirely on their perspective on life. Whether solitude is seen as an opportunity for personal growth or as an empty existence likely depends largely on one’s individual values and worldviews.

And perhaps there is wisdom in both viewpoints, that experiencing both togethernesses with others and being alone brings balance and allows us to live our lives on our own terms truly. Ultimately, it seems that the real value of pursuing a solitary existence ultimately lies within each individual person. As long as they find fulfillment in their own quiet existence, they have found true wisdom.

6. “The wolves knew when it was time to stop looking for what they’d lost, to focus instead on what was yet to come.” ― Jodi Picoult

In the world of survivalism, there are two types of people: those who thrive and those who merely survive. While most people simply adapt to their circumstances, thriving even in the most difficult conditions, others are content to get by and make do simply.

These individuals are often referred to as “lone wolves”; they may be solitary in nature, but they are more than capable of taking care of themselves and conquering any challenge that comes their way. However, while many see these lone wolves as somehow being weak or lesser than other survivors, the truth is that they are actually among the most formidable faced by humanity.

9. “The place where most people aren’t is where the real thing is.” ― Henry Rollins

1. “The wolf on the hill is not as hungry as the wolf climbing the hill.” — Arnold Schwarzenegger

2. “The Native Americans know that wolves are mirrors for humans. What they show us are our strengths and weaknesses.” — Jodi Picoult

3. “It’s better to be unhappy alone than unhappy with someone.” — Marilyn Monroe

There is a lot of truth to the old saying that it is better to be unhappy alone than to be unhappy with someone else. This is because being in a relationship almost always involves compromise and sacrifice, and staying in an unhappy relationship often means trading your own happiness for keeping your partner happy.

It can be extremely difficult to end such a relationship, as this may leave you feeling like you have wasted your time or let someone down. But ultimately, no matter how painful or heartbreaking it may be to leave the person you love, it is always better to walk away than to stay in a toxic or unhappy situation.

4. “Whoever becomes a sheep is eaten by wolves.” — Henri-Frédéric Amiel

5. “It never troubles the wolf how many the sheep may be.” — Virgil

6. “A gentleman is simply a patient wolf.” — Lana Turner

There is no single definition of what makes a person a gentleman, but one common idea is that it requires an air of confidence and restraint. This sense of stoicism and self-control is perhaps best captured in the quote. In other words, to be a gentleman requires the ability to hold back our more primal instincts, keeping ourselves under control even in the most difficult or stressful situations.

This requires not just strength or willpower but also patience and resilience. After all, being a gentleman often means taking the high road, even when things seem to be conspiring against us.

9. “If the wolf would cease his running, the people would cease their shouting.” — German Proverb

10. “A man might befriend a wolf, even break a wolf, but no man could truly tame a wolf.” — George R.R. Martin

11. “I have always been a lone wolf and in the real sense of the word… I feel like I watch people and I wonder why they do things.” — C. JoyBell C.

You shouldn’t enter the forest if you can’t face the wolves. This quote is a warning that life can be tough and unpredictable at times and that in order to survive, we must be prepared for whatever challenges come our way.

Whether navigating relationships, dealing with financial difficulties, or tackling obstacles in our careers, we often need to summon all of our strength and courage if we hope to succeed.

In a sense, the forest represents all of the challenges and struggles we face in life, while the wolves symbolize the fears and doubts that try to hold us back. In other words, this quote reminds us that those who want to achieve their goals must first overcome their fears and stand up to the wolves within themselves.

13. “If it’s true what is said, that only the wise discover the wise, then it must also be true that the lone wolf symbolizes either the biggest fool or the biggest Einstein.” ― Criss Jami

These “lone wolf” quotes are inspiring and remind us that we are never really alone. We all have an inner strength that we can call upon when times are tough. Maybe these quotes will inspire you to find your own strength, too. What do you think? Do you have a favorite “lone wolf” quote? Let us know in the comments below!