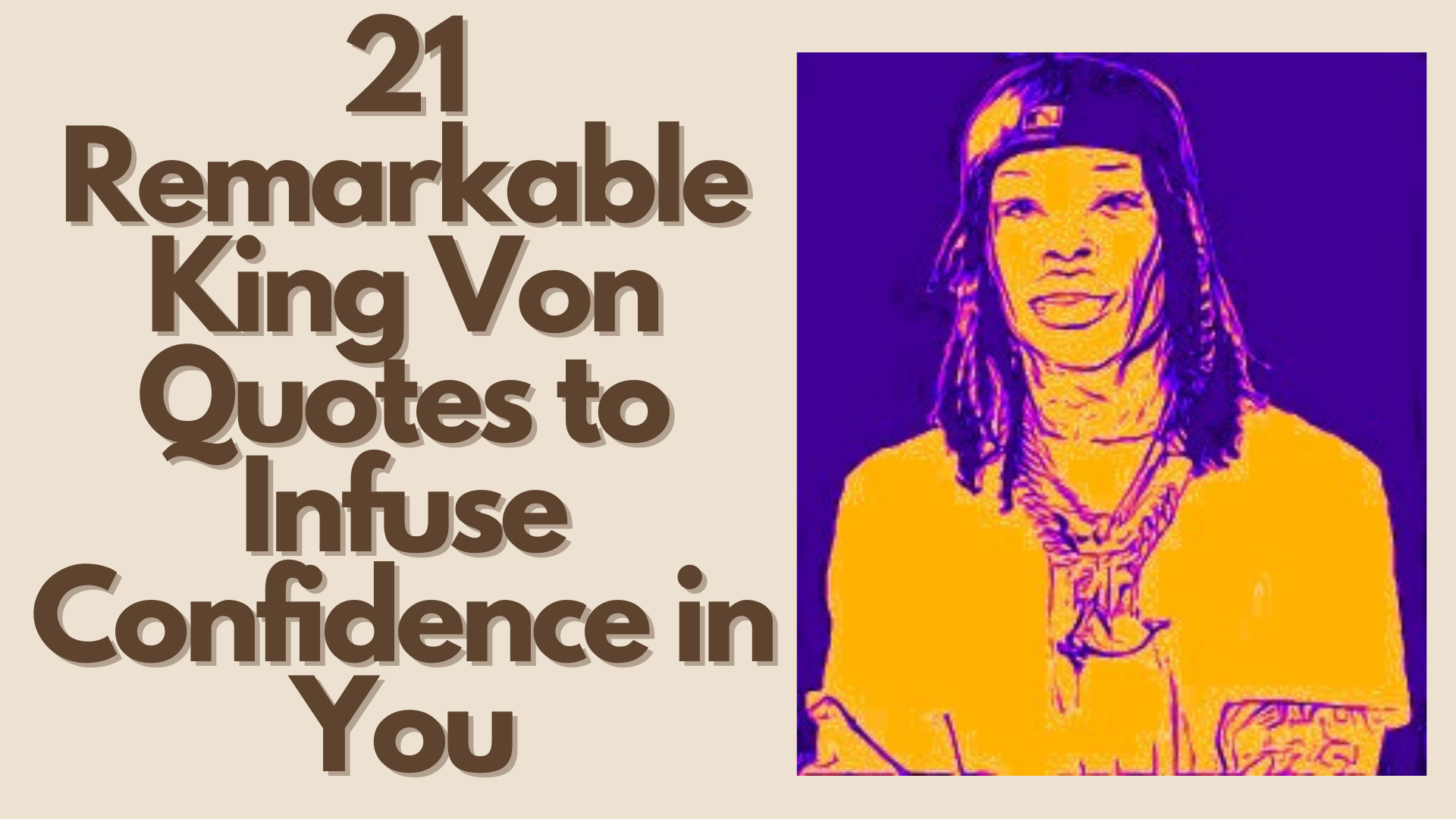 In 2020, American rapper King Von was shot dead. He was only 21 years old. However, in the short time that he was alive, he managed to leave a lasting impression on the music industry.

His lyrics were raw and honest, and his music spoke to a generation of young people who felt misunderstood and neglected by society. In this article, we will look at some of the best quotes from King Von’s short but powerful career.

Von was mostly raised by his mother, His father was in and out of prison throughout Von’s childhood. His father was killed when Von was just 11 years old. This event would have a profound impact on the young rapper, and it would be reflected in his music.

He was a part of the Black Disciples gang. At age 16, he was arrested and incarcerated.

After his release from jail, King Von continued to pursue his dream of becoming a successful rapper. In 2018, he released his single “Crazy Story” under Lil Durk’s Label “Only the Family” which quickly went viral.

Asian Doll was Von’s girlfriend she released a music video “Grandson” in 2019 in which Von had appeared.

Von was shot dead on 6 November 2020, in Atlanta, Georgia. when his crew was involved in an altercation with Quando Rondo’s crew, which resulted in a shooting.

King Von was on the rise to becoming one of the biggest names in rap when he was tragically killed.

Artist Chris Devins painted a mural representing King Von as a tribute to the rapper in Chicago. Let’s remember Von through his amazing quotes listed below:

Oftentimes in life, we meet people and we try to be someone that they want us to be instead of being ourselves. We try to fit into this mold that has been set for us instead of shaping our own path.

We end up forgetting who we are along the way. We tell ourselves that it’s okay to be like this or like that, but in reality, it’s not. It’s not okay to be someone that you’re not. You should never have to change yourself for someone else.

You should never have to lose yourself in order to make someone else happy. You are your own person and you should always remember that. You are unique and special in your own way.

When you start forgetting that, just remember this quote “I am what I am. What I’m not, see I’ll never be.” You are you and that is the best thing that you could ever be.

In a world where it often feels like everyone is out for themselves, it can be difficult to find someone you can trust. However, as the saying goes, there is always one person you can rely on yourself.

And for many people, that reliance takes the form of a gun. In a society that is increasingly fraught with violence, owning a gun can provide a sense of safety and security. For some, it may even be a source of empowerment. After all, when you have a gun, you are the one in control.

No one can hurt you unless you allow them to. As the rapper, King Von so succinctly put it, “I only trust one person, and that’s my Glock.” In a world that is often unpredictable and dangerous, having a gun can be a way of taking control of your own safety and feeling confident in your ability to protect yourself.

5. “You have to go harder so everybody can talk about you. The more people know you, the more money you get.”~ King Von.

It’s a sentiment that summarizes the rapper’s work ethic and his determination to achieve success. Though he was only 26 years old at the time of his death, King Von had already made a name for himself in the rap world.

He was known for his catchy lyrics and his unique flow, and he had collaborated with some of the biggest names in the music industry. At the time of his death, King Von was on the brink of becoming a household name.

His loss is a tragedy not only for his friends and family but for the music industry as a whole. King Von will be remembered as a talented artist with a bright future ahead of him.

This famous line from rapper King Von is not just about making money. It’s about taking control of your life and going after what you want. Too often, we wait for things to happen rather than taking action and making them happen.

So, if you’re waiting for something to happen, ask yourself: is it really worth waiting for? Or would it be better to go out and get it?

11. “A person that stands for nothing will fall for anything.”~ King Von.

Strong words from the late Chicago rapper, King Von. They resonate now more than ever as we see people falling for anything and everything. Whether it be false information, people will believe and stand for anything if they don’t have a strong foundation to stand on in the first place.

So what does it mean to have a solid foundation? To us, it means having a set of values and beliefs that you are unwilling to budge on no matter what. Your foundation should be unshakeable because if it isn’t, you will fall for anything.

Just look at all of the celebrity “couples” that have come and gone within the past year. They didn’t have a firm foundation, to begin with, so when the outside world started crumbling, their relationships did too. Don’t be like them- find something (or someone) to believe in and hold on tight.

Who knows, maybe your unwavering faith will inspire others to do the same.

12. “I thought I would have a real relationship, but I guess not.”~ King Von.

16. “Everybody that f*cks with me, they f*ck with me, but I have to get busy because it’s all about building and going up.”~ King Von.

In a world where it’s so easy to get caught up in the drama and negativity, it’s important to remember that it’s all about building and going up. We all have our own unique skills and talents that we can use to build something great.

Whether it’s a business, a relationship, or just our own personal happiness, we should always be focused on going up.

17. “I’m from the streets so I like rap music; that’s what makes up the streets everywhere.”~ King Von.

In today’s society, it seems like you have to pick a side on everything. You’re either for something or against it, there’s no in-between. But what happens when you don’t necessarily agree with either side? Or when both sides have valid points that you agree with?

It can be difficult to choose which side to align yourself with when that happens. However, as the saying goes, “ain’t no switching sides you gotta pick a side.” You have to choose which perspective you agree with more and stick with it.

There’s no use beating around the bush or straddling the fence, you have to commit to one side or the other. only then can you truly make your voice heard on the issue. Which side will you choose?

It’s interesting how one person’s simple question can resonate with so many people. In just a few words, King Von captures the feeling of sadness that so often descends on us for no apparent reason.

It’s like being caught in a dark cloud on a sunny day. You can be going about your business, and enjoying life when suddenly you’re hit with a wave of sadness. It can be hard to shake off, and it can leave you feeling baffled and confused.

What is this feeling, and where does it come from? The answer may vary from person to person, but one thing is certain: it’s totally normal. Sadness is a part of life, and we all experience it from time to time.

So next time you’re feeling down for no reason, take comfort in knowing that you’re not alone. We’ve all been there.

21. I need to make something raw real quickly. ~ King Von.

King Von’s music was noted for its raw and honest portrayal of life in the inner city. He often rapped about subjects such as violence, drug use, and poverty. King Von’s music resonated with many people who were struggling to make ends meet.

It is with a heavy heart that we say goodbye to King Von. But even as we mourn his death, let us celebrate his life and the words of wisdom he shared with us. These 21 quotes are sure to lift you up and help you stay on track during difficult times.

Remember, no matter what life throws your way, always keep your head up and stay focused on your goals. Thanks for following along with us on this journey through King Von’s life – may his legacy continue to inspire others long after he’s gone.

Do you have a favorite quote from King Von? Let us know in the comments below!