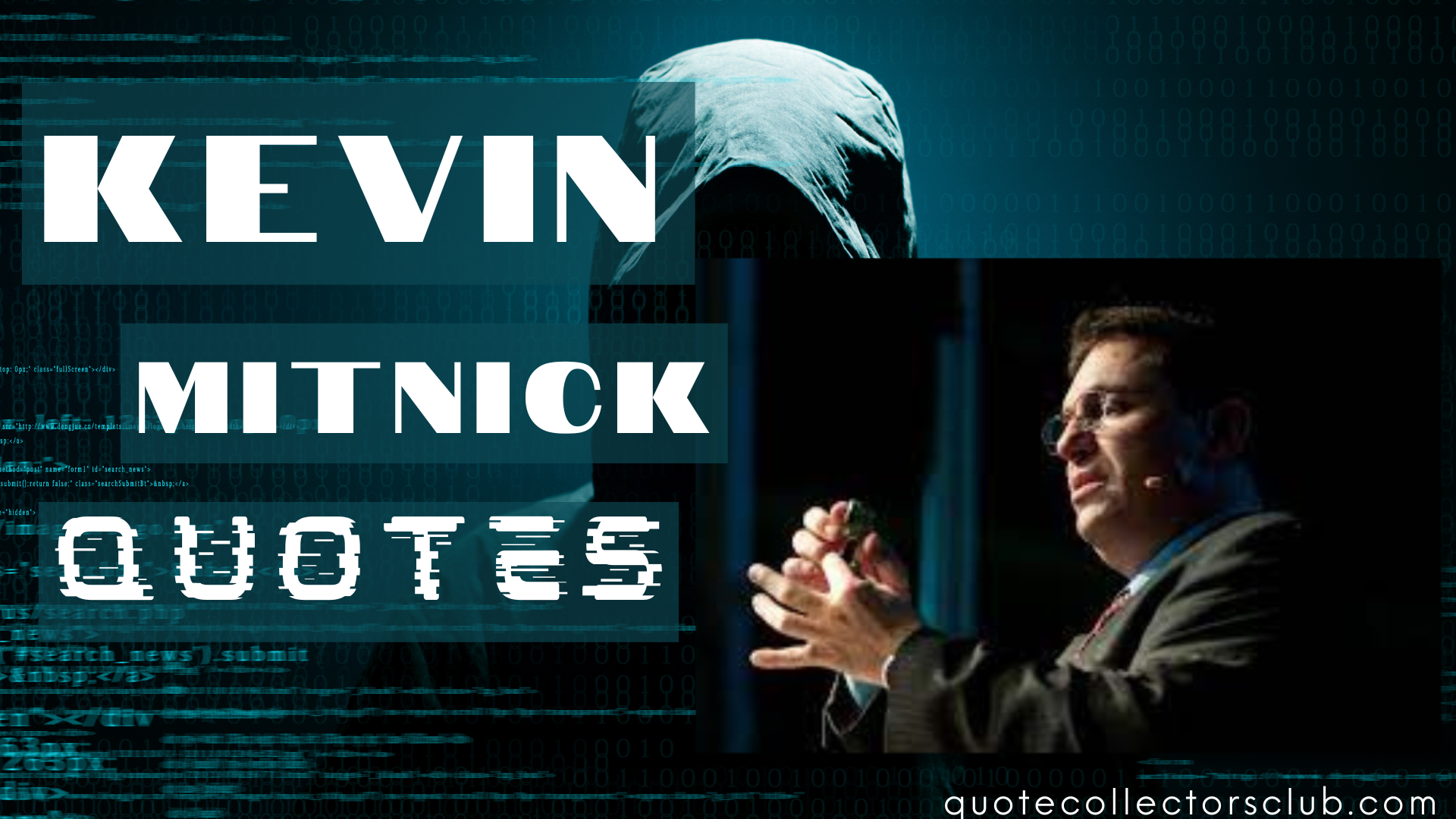 Kevin Mitnick was an American computer security expert, author, and hacker. He is famous for penetrating some of the most secure computer systems in the world and social engineering his way through multiple levels of supposedly secure firewalls.

Kevin Mitnick is one of the world’s most famous hackers. Kevin was born on August 6, 1963,

He first became prominent in the 1980s; later, he was arrested for breaking into the computer systems of some of the biggest companies in the world, including Digital Equipment Corporation, Motorola, Nokia, and Sun Microsystems.

After serving five years in prison, he was released on parole and went on to become a consultant and public speaker on computer security.

In the early days of his criminal career, Kevin Mitnick was known as “The Condor” – a reference to his ability to fly under the radar and evade detection. Since those early days, Mitnick has become something of a folk hero in the world of hacking and cybersecurity.

Mitnick’s exploits have been chronicled in books, movies, and even a documentary, and his quotes on hacking, privacy, and security have been widely circulated.

In this article, we have compiled 28 of the best Kevin Mitnick quotes about hacking, security, and life in general. These quotes will surely inspire and intrigue you, whether you’re a computer geek or just someone interested to know more about the hacking wizard.

In the world of hacking, Kevin Mitnick is a legend. His skills with computers and social engineering made him one of the most successful hackers of all time. Let’s take a look at some of his best quotes.

1. “There is no patch for stupidity.” — Kevin Mitnick

There is no software patch that can fix a stupid. Despite what you may have heard, there is no such thing as a “stupidity update.” Kevin Mitnick, the world-renowned hacker and author of The Art of Deception knows this all too well.

“Stupidity is the number one security problem in the world,” says Mitnick. “It’s not a virus or a Trojan horse – it’s people doing stupid things.” Things like clicking on links in phishing emails, using weak passwords, or falling for social engineering tricks.

There are plenty of ways to protect yourself from malware and other security threats, but there is no easy fix when it comes to stupidity.

2. “Companies spend millions of dollars on firewalls and secure access devices, and it’s money wasted because none of these measures address the weakest link in the security chain: the people who use, administer and operate computer systems.”— Kevin Mitnick

4. “Choosing a hard-to-guess, but easy-to-remember password is important!”— Kevin Mitnick

5. “You can’t go to Windows Update and get a patch for stupidity.”— Kevin Mitnick

6. “The key to social engineering is influencing a person to do something that allows the hacker to gain access to information or your network.”— Kevin Mitnick

For example, let’s say you receive an email from your bank asking you to click on a link and update your account information. The email looks legitimate, so you click on the link and enter your login credentials. Once you do this, the hacker has access to your account and can do whatever he wants.

This may seem like a simple example, but social engineering can be much more sophisticated than this. Hackers are constantly coming up with new ways to trick people into giving them what they want. So it’s important to be aware of the dangers and know how to protect yourself.

7. “Social engineering is using deception, manipulation and influence to convince a human who has access to a computer system to do something, like click on an attachment in an e-mail.”— Kevin Mitnick

8. “I trust online banking. You know why? Because if somebody hacks into my account and defrauds my credit card company, or my online bank account, guess who takes the loss? The bank, not me.”— Kevin Mitnick

9. “I characterize myself as a retired hacker. I’m applying what I know to improve security at companies.”— Kevin Mitnick

10. “The hacker mindset doesn’t actually see what happens on the other side, to the victim.”— Kevin Mitnick

The old saying “it takes one to know one” definitely rings true when it comes to hackers. If you want to understand the mindset of a hacker, you have to think like one. And that’s not always easy for people who don’t have experience with hacking.

But Kevin Mitnick, one of the world’s most famous hackers, says that there’s one key thing that all hackers have in common: they don’t think about the victim.

“The hacker mindset doesn’t actually see what happens on the other side, to the victim,” Mitnick said in an interview with Business Insider. “It’s almost like they’re playing a video game.”

For hackers, it’s all about the challenge. They’re not trying to cause harm or steal information for personal gain, they just want to see if they can do it.

11. “New security loopholes are constantly popping up because of wireless networking. The cat-and-mouse game between hackers and system administrators is still in full swing.”— Kevin Mitnick

12. “Social engineering is using manipulation, influence and deception to get a person, a trusted insider within an organization, to comply with a request, and the request is usually to release information or to perform some sort of action item that benefits that attacker.”— Kevin Mitnick

13. “I get hired to hack into computers now and sometimes it’s actually easier than it was years ago.”— Kevin Mitnick

15. “If you go to a coffee shop or at the airport, and you’re using open wireless, I would use a VPN service that you could subscribe for 10 bucks a month. Everything is encrypted in an encryption tunnel, so a hacker cannot tamper with your connection.”— Kevin Mitnick

17. “As a young boy, I was taught in high school that hacking was cool.”— Kevin Mitnick

Hacking has been a part of Kevin Mitnick’s life since he was a young boy. He was taught in high school that hacking was cool and has been doing it since. He’s now one of the world’s most famous hackers and uses his skills to help businesses stay secure.

18. “Oracle, for example, has even hired people to dumpster dive for information about its competitor, Microsoft. It’s not even illegal, because trash isn’t covered by data secrecy laws.”— Kevin Mitnick

19. “I get hired by companies to hack into their systems and break into their physical facilities to find security holes. Our success rate is 100%; we’ve always found a hole.”— Kevin Mitnick

20. “My argument is not that I shouldn’t have been punished, but that the punishment didn’t fit the crime.”— Kevin Mitnick

As a computer security consultant, Kevin Mitnick knows a lot about hacking. So when he was arrested and charged with breaking into corporate computer systems in the 90s, many people thought the punishment didn’t fit the crime.

“I wasn’t trying to hurt anybody,” Mitnick says. “I was just curious about how these systems worked.”

Mitnick served five years in prison and was then placed on probation for three years. During that time, he was not allowed to use computers or the Internet.

Now, Mitnick is using his hacking knowledge to help companies secure their systems against attacks. He’s also written a book called The Art of Invisibility, which is all about how to stay safe online.

21. “Hackers are breaking the systems for profit. Before, it was about intellectual curiosity and pursuit of knowledge and thrill, and now hacking is big business.”— Kevin Mitnick

22. “My primary goal of hacking was the intellectual curiosity, the seduction of adventure.”— Kevin Mitnick

23. “For the average home-user, anti-virus software is a must.”— Kevin Mitnick

24. “I was addicted to hacking, more for the intellectual challenge, the curiosity, the seduction of adventure; not for stealing, or causing damage or writing computer viruses.”— Kevin Mitnick

Most people don’t think twice about throwing away a piece of trash, but hackers know that garbage can provide important details about a person or company. For example, discarded business cards contain names, telephone numbers, and a company’s internal jargon. Hackers can use this information to gain access to sensitive information or commit identity theft.

Kevin Mitnick was able to gain access to some of the world’s most secure systems by dumpster diving. While this may seem like a low-tech method, it was effective in getting the information he needed.

Be careful when you toss something in the trash; think twice! You never know who might be going through your garbage looking for information that could be used against you.

26. “I got so passionate about technology. Hacking to me was like a video game. It was about getting trophies. I just kept going on and on, despite all the trouble I was getting into, because I was hooked.”— Kevin Mitnick

27. “A hacker doesnt deliberately destroy data or profit from his activities.”— Kevin Mitnick

28. “I made stupid decisions as a kid, or as a young adult, but I’m trying to be now, I’m trying to take this lemon and make lemonade.”— Kevin Mitnick

Kevin Mitnick understands that he made stupid decisions. As a kid, he was constantly getting into trouble. As a young adult, he made even worse choices that led to him becoming one of the most wanted hackers in the world. But now, he’s trying to use his experiences to help others avoid making the same mistakes he did.

In conclusion, Kevin Mitnick’s quotes provide valuable insights into the world of hacking and security. His years of experience and expertise make him a credible source of information on the subject. His quotes offer advice and warnings that anyone interested in keeping their information safe should be heeded.