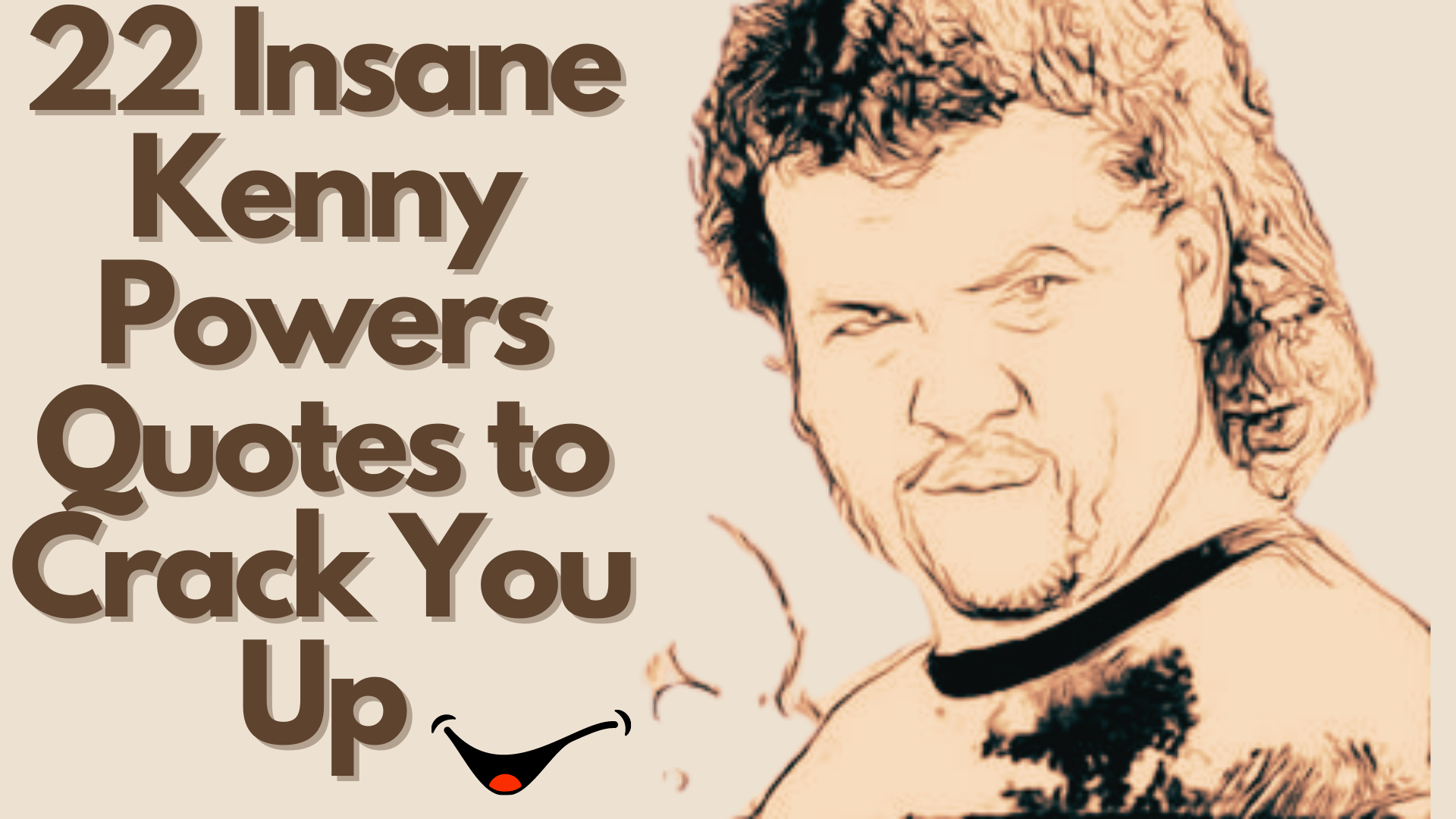 Kenny Powers is a character that many people love to hate. He is arrogant, cocky, and often says things that are just plain rude. But there’s no denying that the man knows how to deliver a good quote. In this article, we’ll be taking a look at some of the best Kenny Powers Quotes from Eastbound & Down.

Played by Danny McBride, Kenny Powers is a very entertaining character on the HBO television comedy series Eastbound & Down. Kenny Powers is a former professional baseball player who had to retire due to his ego and short temper.

After his retirement, he became a substitute teacher and then eventually got a job as a physical education teacher. He is also the coach of the school’s baseball team in  Shelby, North Carolina.

Earlier in his career, Kenny makes a fantastic debut as a 19-year-old, in a major league, taking Atlanta to the world series. But due to his fiery personality, he is not able to manage to remain on a single side and often bounces from one team to another.

Kenny Powers is the kind of person who always says what’s on his mind, regardless of how it might make other people feel. He is also very confident in himself and his abilities. Although his open nature and big ego often get him into trouble, it’s also what makes him so entertaining to watch.

Here are the most Interesting Kenny Powers Quotes

Danny McBride has not only played the memorable character of Kenny Powers but also is the creator of the television comedy series, Eastbound & Down along with Ben Best and Jody Hill.

Let’s have a look at the best Kenny Powers quotes:

1. “It’s no mystery that ass has always been tits’ greatest enemy. It’s almost like a Muslim-Jewish thing, but with tits and ass.”- Kenny Powers

While some might say that Kenny Powers is simply an ignorant jock, there is no denying that the man has a way with words. In this quote, he perfectly captures the long-standing rivalry between tits and ass.

It’s no secret that these two body parts have always been in competition with each other. After all, they are both prized possessions that are highly coveted by the opposite sex.

While tits have always been considered the more traditional source of beauty, the ass has been rapidly gaining ground in recent years. Thanks to the rise of popular culture icons like Kim Kardashian, Jen Selter, and Nicki Minaj, ass is now more popular than ever before.

And while there will always be debate about which body part is superior, there’s no doubt that both tits and ass have their own unique appeal.

2. “Why would you do this to me? Here this whole time I thought you were the whore with a heart of gold. Instead you’re just a whore with a real whore’s heart.”- Kenny Powers

3. “Stay in school. Fight the power. Don’t do drugs. Unless, of course, you’re doing them with me.”- Kenny Powers

4. “Listen here, you beautiful bitch. I’m about to fuck you up with some truth.”- Kenny Powers

As the world-famous quote from Kenny Powers goes, sometimes the best way to screw someone over is with some brutal honesty. Though it might not be the nicest thing to do, there’s no denying that the truth can be a powerful weapon.

And when it comes to getting what you want, there’s nothing wrong with using every tool at your disposal. Of course, there’s a fine line between speaking the truth and being downright mean.

But if you can find that balance, you’ll be surprised at how effective the truth can be. After all, people often appreciate honesty, even if it’s not what they want to hear.

So next time you’re looking to fuck someone up, don’t be afraid to give them a dose of reality. It just might be exactly what they need.

5. “I can’t believe I opened up my heart up to that bitch. Opened it wide up. And she just squatted with that big beautiful booty and dumped all over it.”- Kenny Powers

7. “If you’ve got something you want to say, then just say it. You can save us a lot of time with this fuckin’ pointless history lesson in this goddamn creepy, unimpressive, fuckin’ hall. I don’t like it in here. It’s gross.”- Kenny Powers

Kenny Powers is one of the most interesting characters on television. He’s crass, he’s brash, and he doesn’t care what anyone thinks of him. In one of his most memorable moments, he criticizes a mother for naming her baby after the Titanic.

What’s even more incredible is that he does it with a straight face. It’s clear that Kenny doesn’t have any time for namby-pamby names. He believes that a name should be strong and distinctive – just like him.

So, if you’re looking for a name that will make people sit up and take notice, then look no further than Kenny Powers. His unique brand of humor is sure to give your child a head start in life!

10. “Did this tale end the way I thought it would? Probably not. But as long as I win, who gives a shit.”- Kenny Powers

11. “I’m Kenny Powers! And I am very upset with how I am acting right now. I just have a very hard time expressing my emotions, and I can’t stop from yelling.”- Kenny Powers

12.  “God has taken a dump on my face. The love of my life doesn’t want to have sex with me ‘cause she’s marrying some smoothie eatin’ fairy.”- Kenny Powers

We’ve all been there. We’ve all had those moments where we feel like life has just taken a big ol’ dump on our face. But, as Kenny Powers so eloquently put it, sometimes these tough times can actually be a blessing in disguise.

Without the challenges and heartache, we wouldn’t be able to appreciate the good times nearly as much. So, next time you’re feeling down, just remember that even the biggest disasters can eventually lead to something great.

Just keep your head up and power through, because better things are definitely on the horizon.

13. “See, in life, when you have talent, all the other shit doesn’t matter. If we were on an island with no weights and no running drills, who would be on top then? The guy with the talent.”- Kenny Powers

14. “There have been many comebacks throughout history; Jesus was dead, but then came back as an all-powerful God zombie. Ryan O’Neal had his ups and downs, but is now back and better than ever.”- Kenny Powers

15. “Over the course of my career, I played on many different teams. Some I liked. Some I really fucking hated. I’m not mentioning any names, but let’s just say Seattle can tongue-kiss my shit hole.”- Kenny Powers

16. “I’ve been blessed with many things in this life—an arm like a damn rocket, a cock like a Burmese python, and the mind of a fucking scientist.”- Kenny Powers

Kenny Powers was never one to shy away from bragging about his accomplishments. In fact, he often boasted about his physical gifts, calling himself “blessed” with a strong arm and a large penis. Powers was also known for his Cockiness when it came to his intellect.

He once said that he had the mind of a “fucking scientist.” While some people might see this as arrogant, others admired Kenny for his confidence. After all, he was usually able to back up his claims with results.

For example, his arm did indeed allow him to throw baseballs at speeds that few others could match. As for his sexual prowess, well, let’s just say that Kenny was definitely popular with the ladies.

In other words, whether you loved him or hated him, there was no denying that Kenny Powers was one hell of a character.

17. “I play real sports. Not trying to be the best at exercising. Fuck this guy.”- Kenny Powers

18. “I’m sober and ready to destroy the competitions.”- Kenny Powers

19. “Hello. School, can you hear me? Good morning, students, teachers, faculty members, lunch ladies, janitors. This is Kenny Powers, professional baseball player, and I got something I wanna say. A lot of you motherfuckers think you know who Kenny Powers is.”- Kenny Powers

21. “Reminds me of why I’m here in the first place. A quest is nothin’ if you got no one to brag about it to, will never reach the end if you’re only doing it for yourself.”- Kenny Powers

There’s something about a good quest that just gets the blood pumping. Maybe it’s the sense of adventure, the prospect of rewards, or simply the glory of being able to say “I did it!” Whatever the reason, there’s no denying that a well-designed quest can be an exhilarating experience.

But as Kenny Powers reminds us, a quest is not truly successful unless it is shared with others. After all, what’s the point of embarking on an epic journey if there’s no one around to hear about it?

quests are meant to be shared experiences, and the best ones are those that bring people together. So next time you’re feeling like going on a quest, invite some friends along for the ride. After all, the best adventures are always better when they’re shared.

22. “I got two hard rules I live by, Pop; I don’t fuck with the devil, and I never do tag-teams with blood relatives. Take it easy, old man.”- Kenny Powers

Anyone who’s watched Eastbound and Down know that Kenny Powers is a man of conviction. He knows what he wants and he goes after it with everything he has. In this quote, Kenny is explaining his two rules for living to his father.

Second, he never does tag teams with blood relatives. This is probably a reference to the fact that Kenny doesn’t like to team up with anyone, because he likes to be in control.

But it could also be interpreted as a warning not to trust family members because they’ll always end up betraying you. Either way, these are two rules that Kenny lives by and that have served him well over the years.

Kenny Powers is known for his brash and often crude sense of humor. Though he can be abrasive, many of his quotes are downright hilarious.

We hope you enjoyed them as much as we did. If you have any suggestions for future blog posts, let us know! We always love to hear from our readers.