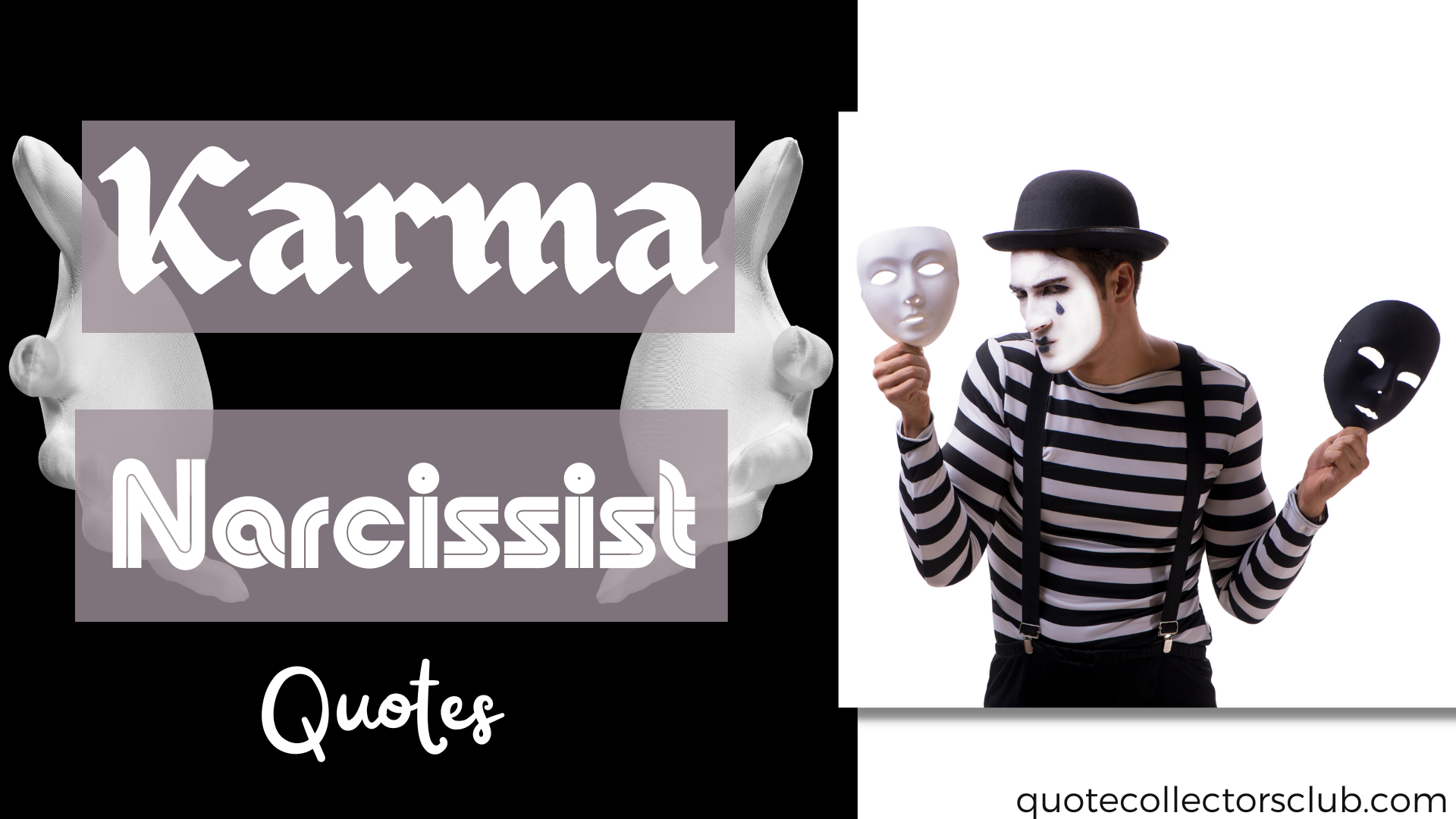 If you have been through this type of abuse, it is time to heal your heart and mind. One way to do that is by reading karma narcissist quotes. These quotes will help give you some perspective on what happened and why. They will also remind you that you are not alone in this journey.

Narcissism is a personality trait characterized by a grandiose behavior pattern that centers around the individual’s beliefs, goals, and needs. Someone with narcissistic tendencies may be overly self-assured, motivated by self-promotion, and prone to manipulative behaviors in order to get what they want.

However, narcissism is not necessarily pathological or unhealthy; some people may simply possess certain qualities that lean towards being narcissistic without necessarily falling into negative patterns or behaviors. Whether or not narcissism is always seen as a problem depends on its expression and context, as well as the surrounding culture and society.

Nevertheless, recognizing narcissistic behavior can be important for understanding how to interact with others and appropriately address potential conflicts or issues. Ultimately, the best way to deal with narcissism often involves careful consideration of context and approach in order to work effectively with narcissistic individuals without triggering negative ego responses or unhealthy forms of narcissism.

At the root of narcissism is often a deep sense of insecurity and a need for validation from others. Let’s start with some karma narcissist quotes that help better understand this personality disorder.

1. “Maybe, the lesson we can all learn from the inner sadness of a Narcissist is to see through our own fabrications, our own illusions so that we can be set free to be real once more.”

There is a great deal of wisdom in the quote that all of us can learn from the inner sadness of a narcissist. At first glance, it might seem like the sadness experienced by a narcissist is an individual experience that has little relevance to the rest of us. However, if we take a closer look at this mindset and thought process, we can begin to see how our own fabrications and illusions can often keep us from truly experiencing life.

In many ways, the illusion of perfection that exists within a narcissist stems from a deep-seated belief that they are somehow better than others or more deserving than others. This sense of entitlement makes them very sensitive to any perceived slights or criticisms, which only reinforces their feelings of bitterness and anger toward those around them.

By coming to terms with our own faults and limitations, however, we are able to let go of these self-imposed expectations and become more open to truly connecting with others. Through this lens, perhaps we can see the pain felt by a narcissist as simply another reminder of what it means to be human after all.

2. “There was nothing more unattractive than narcissism, she thought: nothing could transform beauty into a cloying, unattractive quality than that self-conscious appreciation of self.”

3. “But that’s the thing about narcissists. They can try to fool you, with all their heart, but in the end, they’re just fooling themselves.”

4. “You can teach a narcissist to show up on time, … but you can’t train them to listen once they get there.”

5. “Narcissists withhold affection to punish you. Withhold attention to get revenge. And withhold an emotional empathetic response to make you feel insecure.”

Many people have heard the saying that “the best cure for a narcissist is a mirror.” In other words, exposing someone with narcissistic tendencies to the reality of their own behavior is more likely to become aware of and take responsibility for their inappropriate or destructive actions.

This idea is also reflected in the quote, which suggests that narcissists withhold affection not only as a way of controlling and manipulating others but also as a form of punishment. For example, by withholding emotional support or showing warmth and compassion, a narcissist can effectively cause emotional harm and even insecurity in those around them.

Furthermore, this quote also highlights how narcissists may try to get revenge against perceived enemies using similar methods. For example, they might withhold attention or ignore someone to punish or demonstrate dominance over that person. Thus, by understanding the motivations behind these behaviors, we can better protect ourselves from harmful tactics used by narcissists.

6. “A narcissist’s criticism is their autobiography.”

7. “Relationships with narcissists are held in place by hope of a “someday better,” with little evidence to support it will ever arrive.”

8. “If you want to go from being adored to devalued in the blink of an eye, simply insult the narcissist.”

9. “They provoke you but when you defend yourself, they cry victim.”

10. “Hate is the complement of fear and narcissists like being feared. It imbues them with an intoxicating sensation of omnipotence.”

11. “When people don’t tell you the truth, what they really are saying is they don’t value you or their relationship with you enough to be honest. “

At its core, this quote is a reminder that honesty is one of the most critical components of a healthy and meaningful relationship. When someone chooses to withhold important information or lie, it suggests they do not truly value you and your connection with them. This can be extremely damaging to any relationship – personal or professional – as it undermines trust and understanding.

However, while this quote points to the importance of truthfulness in relationships, it also acknowledges that being honest is not always easy. We may often choose to tell half-truths or omit certain details to protect ourselves or avoid causing harm.

But in order for our relationships to thrive, we must strive for authenticity and openness, even when it may be difficult or uncomfortable at first. In the end, only through complete honesty can we build strong and lasting connections with the people we care about most.

12. “The worst lies were the lies I told myself about the lies others told me.”

13. “Narcissists commonly cut people off and out of their lives due to their shallow emotional style of seeing others as either good or bad.”

14. “Narcissists would rather lie and humiliate you than to admit that they were in the wrong.”

15. “Americans are experiencing an epidemic in narcissistic behaviour in a culture that is intrinsically self-conscious and selfish, and citizens are encouraged to pursue happiness and instant gratification of their personal desires.”

16. “Beware of narcissistic people. They’ll tell everyone you’re crazy, only to cover up their trickery.”

Narcissistic people can be incredibly manipulative and dishonest, and they often use underhanded tactics to manipulate others and hide their own faults. One such tactic is accusing others of being crazy or unstable, even if there is no basis for this claim. By casting doubt on the mental health of those around them, narcissistic individuals can deflect attention away from their own actions and create resentment and distrust towards anyone who questions them.

To protect yourself from narcissistic people, it is important to be mindful of their words and behaviors and to resist the urge to believe everything they say at face value. When dealing with these individuals, it is always better to trust your instincts than to accept what they say at face value. Ultimately, knowing how to spot a narcissist will help you stay safe and avoid falling prey to their harmful manipulation tactics.

17. “Narcissists withhold affection to punish you. Withhold attention to get revenge. And withhold an emotional empathetic response to make you feel insecure.”

18. “Ego is born of the need to ‘prove’ oneself instead of making the choice to ‘be’ oneself.”

19. “Most of the narcissists are geniuses and masters of Psychology. But they are using their knowledge to eradicate, rather than to help humanity.”

20. “Narcissism is voluntary blindness, an agreement not to look beneath the surface.”

The quote above speaks to the importance of treating others with respect and openness, regardless of how they may act toward us. This idea reflects the idea that we all have the capacity to change our ways and be more mindful of how we interact with others.

It takes a level of self-awareness and maturity to recognize when our actions contribute to mistreatment or negative behavior in others, and it is only by stepping back and looking critically at ourselves that we can begin to understand why others might refuse to treat us in the same manner.

22. “The only good decision you will make while with them is leaving!”

23. “But both the narcissist and his partner do not really consider each other. Trapped in the moves of an all-consuming dance macabre, they follow the motions morbidly; semiconscious, desensitized, exhausted, and concerned only with survival.”

24. “Being a control freak is a weakness, not a strength. If you can’t allow others to shine, you’re exhibiting signs of narcissism and showing a lack of self-confidence. It is isolation through ego.”

25. “Children of narcissists learn that love is abuse. The narcissist teaches them that if someone displeases you, it is okay to harm them and call it love.”

26. “Babies cry to get their needs met. Narcissists are great actors and often use tears as a tool of manipulation, this is an abuse tactic! Do not allow them to let this work as guilt, they are acting!”

The quote highlights the important difference between genuine expressions of emotion and manipulative tactics that are aimed at achieving the desired outcome. Babies naturally cry when they are in distress or need something, whereas narcissists deliberately use their tears as a way to gain sympathy, attention, or other benefits.

This manipulative tactic can be difficult to recognize because it often involves real feelings and legitimate emotions. However, by being aware of the inherent differences between genuine expressions of emotion and calculated attempts to manipulate others through the use of emotional displays, we can guard ourselves against falling prey to the tactics of narcissists. In order to do so effectively, we must remain vigilant and focused on our own goals and needs instead of letting ourselves be blinded by attractive displays of emotion from those who seek only their own gain.

It’s important to remember that whatever goes around comes back around. So if you’re quick to judge or dismiss someone, think about how you would feel in their shoes. You never know what people are going through, and everyone has a story. Be kind, be understanding because you never know when karma will come knocking on your door.