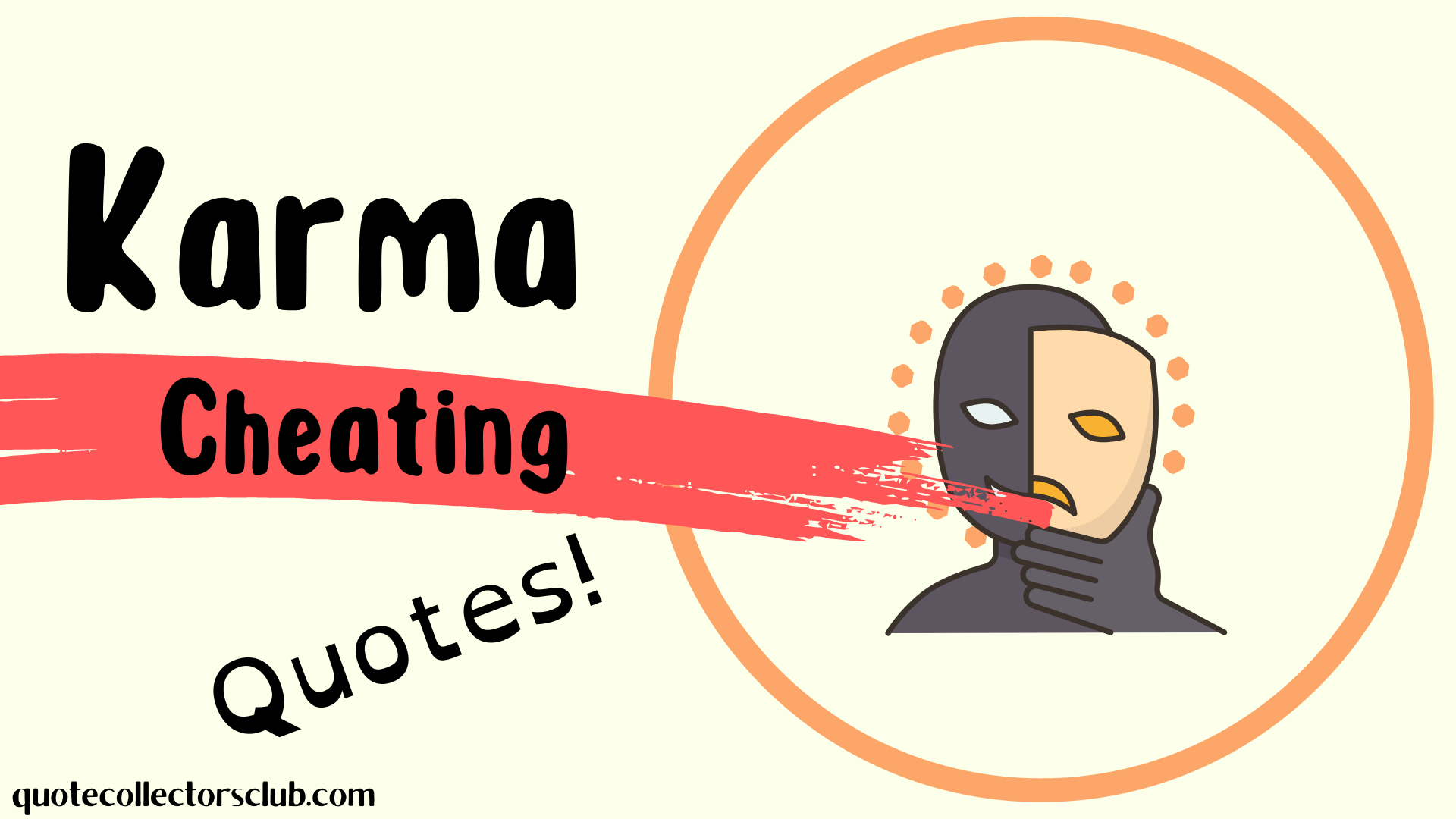 Do you believe in karma? The law of karma is a principle in Hinduism and Buddhism that holds that actions in this life lead to consequences in the next life. This is often thought of as a form of justice, where people who do bad things will have to suffer the consequences in future lives.

But karma can also be a teaching tool, showing us the consequences of our actions and helping us learn from our mistakes. In this article, we will discuss the role of karma in cheating and how karma can teach lessons to those who cheat others behind their back. We will also list some famous karma cheating quotes!

About the Concept of “Karma”

Karma is often described as a form of cosmic justice, and it’s easy to see why. The basic idea is that our actions have consequences; if we do something bad, we will eventually suffer the consequences.

This can motivate people to try to live good lives, as they know their bad deeds will eventually come back to haunt them. It’s also worth noting that karma doesn’t just apply to individual actions; it can also apply to the actions of groups or even entire societies.

If a group or society does something bad, they will eventually have to face the consequences of their actions. In this way, karma can be seen as a force that helps to bring about balance and justice in the world.

While the concept of karma is not always easy to explain, it is clear that it can have a powerful effect on how people view their past actions. For many, the belief in karma provides a sense of comfort and hope that ultimately, good will triumph over evil. Let’s look at some karma cheating quotes that highlight this belief.

1. “Karma has no menu. You get served what you deserve.”

The law of karma is often described as “what goes around, comes around.” In other words, our actions have consequences, both good and bad. The theory of karma is a central tenet of many Eastern religions, including Buddhism, Hinduism, and Jainism.

It teaches that our choices and actions determine our destiny. If we do good deeds, we will experience positive karma. But if we engage in negative behaviors, we will incur negative karma.

Over time, these karmic debts can become quite heavy, leading to rebirth in a lower realm or even life in a prison-like state known as “hell.” However, it is never too late to change our ways and begin accumulating positive karma. As the saying goes, “Karma has no menu. You get served what you deserve.”

So let us be mindful of our choices and actions, knowing that they will shape our future in ways we may not even be able to imagine.

2. “When Karma comes back to punch you in the face, I want to be there in case it needs help.”

God is the Universe, and Karma is the law of cause and effect. What you put out into the Universe will come back to you. So, if you want good things to happen, you must do good things. It’s as simple as that! Some might say this quote is a bit sexist, but we think it’s a fun way to explain how Karma works.

The quote “karma has no deadline” is often used to describe the idea that good deeds will be repaid in kind, even if it takes some time. In other words, patience is important when waiting for good things to happen. This quote also highlights the fact that karma is often a long-term process.

The effects of our actions may not be immediately evident, but they will eventually come back to us. So, if we want to experience positive karma, we must be sure to put positive energy into the world.

This belief is based on the idea that we are all connected and that our actions have an impact on others. The concept of karma is found in many religions and cultures, and it is often used as a way to encourage people to lead good lives. Ultimately, the belief is that if we all do our part to make the world better, we will be rewarded with happiness and good fortune.

7. “Men are not punished for their sins but by them.” – Elbert Hubbard

8. “Nobody deserves misery, but sometimes it’s just your turn.”

Karma is a powerful force that can majorly impact our lives. Just like gravity, karma is always at work, shaping our lives and influencing our actions. We may not always be aware of it, but every decision creates karma that will eventually come back to us. So let’s be mindful of our choices and the karma we create. It may help create a more positive and fulfilling life for ourselves and others.

13. “Realize that everything connects to everything else.” – Leonardo DaVinci

In Buddhist teachings, karma is not simply about the consequences of our actions but also the interconnectedness of all things. The belief is that everything we do – whether good or bad – affects not just ourselves but also the world around us.

Our actions create cause-and-effect chains that extend far into the future, impacting not only our own lives but also the lives of others. As we become more mindful of how our actions affect others, we can start to make choices that help create a more positive and compassionate world for all.

15. “Be kind to others, for everyone is fighting a battle.”

We should always show compassion towards others because we don’t know what challenges they may be facing in their own lives. This is particularly important to remember when we encounter someone who seems to be acting impatient or rude.

It’s easy to forget that everyone has their battles to fight, and we should cut them slack instead of getting angry ourselves. In the end, Showing compassion and understanding is always the best way forward.

17. “Karma is like a rubber band. You can only stretch it so far before it comes back and smacks you in the face.”

This idea of Karma is found in many religions and cultures, and it is a way of providing justice without needing to take revenge yourself. There are times when it can be difficult to watch someone get away with hurtful or criminal behavior.

However, knowing that Karma will eventually catch up to them can be a source of comfort. Watching someone suffer the consequences of their actions can be very satisfying and is often the best form of revenge.

20. “He that slays shall be slain.” -Scottish Proverb

This quote is a powerful reminder of the law of karma. According to this law, every action has an equal and opposite reaction. In other words, what goes around, comes around.

This quote is a warning to those who would harm others. If you harm someone, eventually, someone will harm you in return. This is the natural order of things and is impossible to escape.

However, it is also possible to change the course of one’s karma by consciously choosing not to engage in harmful actions. By making this choice, we can break the cycle of violence and create a more peaceful world for all.

22. “Be careful how you treat people. What you do to others has a funny way of coming back on you.”

23. “Karma’s just sharpening her nails and finishing her drink. She says she’ll be with you shortly.”

The quote suggests that Karma is a force to be reckoned with – she’s powerful, dangerous, and not to be messed with. The quote also has a hint of dark humor, suggesting that the speaker is not overly worried about the consequences of their actions.

In other words, they’re willing to take their chances with Karma, knowing that she may be able to see them through. Ultimately, the quote leaves it up to the reader to decide whether or not they believe in Karma. Do you think she’s real? And if so, what do you think her ultimate purpose is? Is she merely a way of ensuring that people get what they deserve, or is she something more? Only time will tell.

24. “Who hurt others will end up being hurt also. That is called bad karma.”

25. “Bad karma is like instant coffee nowadays. We don’t have to wait long enough.”

Karma is one of those concepts that has been around for centuries, yet it still remains a mystery to many. The quotes provide a glimpse into people’s vast array of thoughts and opinions about karma.

We hope you enjoyed reading them as much as we enjoyed finding them. If you have suggestions for other great karma quotes, let us know in the comments below!