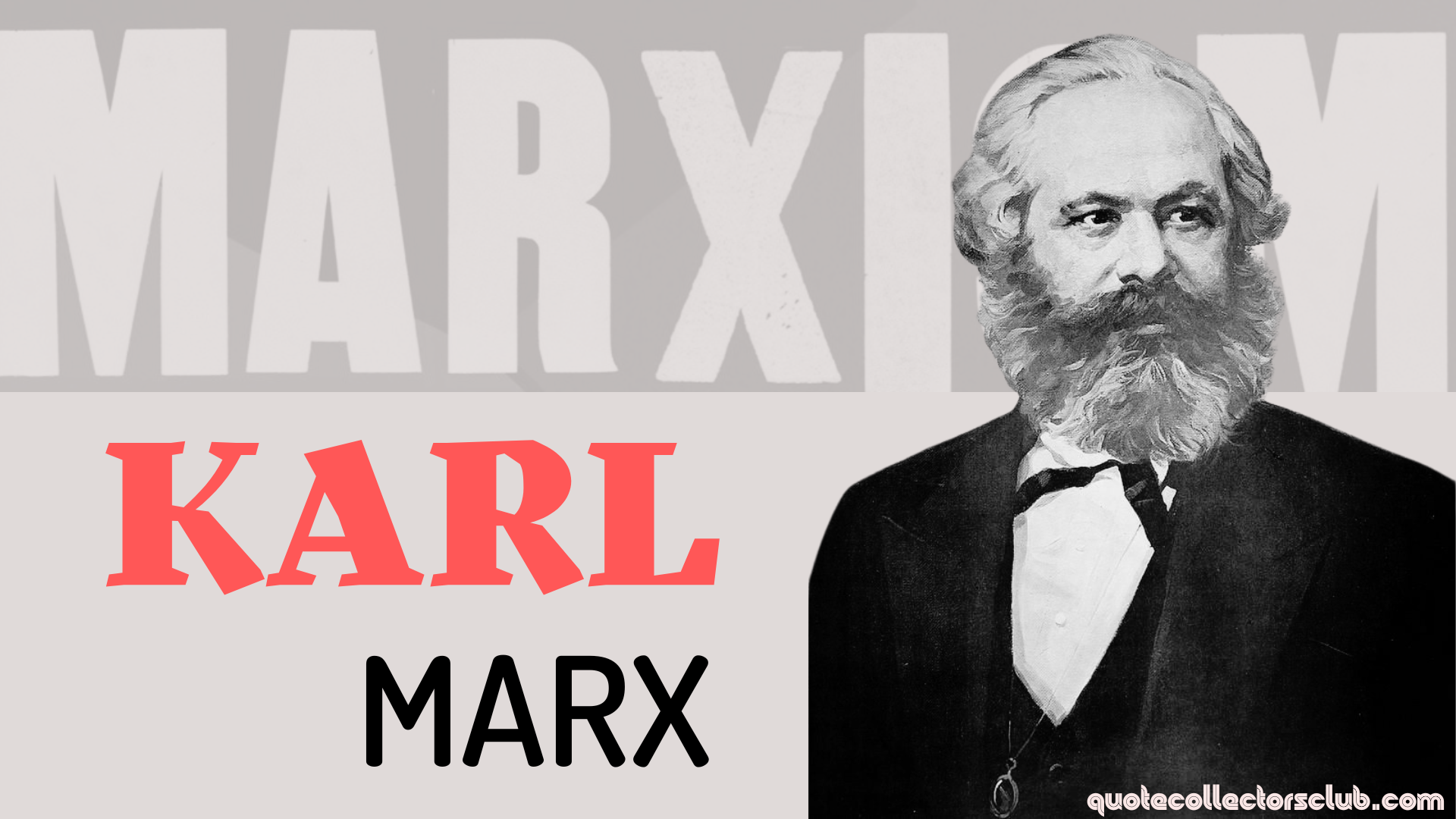 Karl Marx was a German philosopher, economist, sociologist, historian, journalist, and revolutionary socialist. He is considered the founder of modern communism and one of the most influential figures in human history. Marx’s theories about society and economics – collectively known as Marxism – formed the basis for communist governments around the world. Here are some of his most famous quotes:

Karl Marx was one of the most influential political thinkers of the 19th century. Born in Prussia (Germany) in 1818, Marx studied law and philosophy at university. It was during his time at university that he became interested in socialism, a political ideology that calls for the equality of all people.

In 1848, Marx and his friend Friedrich Engels published The Communist Manifesto, a groundbreaking work that outlined their vision for a socialist society. Marx went on to publish other important works, including Das Kapital, which is considered one of the most important texts in economics.

Due to his revolutionary ideas, Marx was exiled from several countries throughout his life. He eventually settled in London, where he died in 1883. Although he was never able to see his vision come to fruition during his lifetime, Marx’s ideas have had a lasting impact on the world, and his work continues to be studied by scholars today.

Marx, on the other hand, provided concepts that could frequently be subjected to the scientific method. Marx and Auguste Comte sought to establish scientifically justifiable beliefs in response to European secularization and new advances in history and science studies.

1. “The philosophers have only interpreted the world in various ways. The point, however, is to change it.”- Karl Marx

In this quote, Marx argues that the role of philosophers is not simply to understand the world but to change it. This is a radical idea, and it has inspired generations of thinkers and activists to strive for social justice. For Marx, philosophy was not an academic exercise but a practical tool for transforming the world.

He believed that by critically analyzing society, philosophers could help to expose its contradictions and pave the way for change. This quote remains relevant today as we continue to live in a world marked by inequality and injustice. The philosophers may have interpreted the world differently, but the point is still to change it.

2. “The oppressed are allowed once every few years to decide which particular representatives of the oppressing class are to represent and repress them.”- Karl Marx

4. “The last capitalist we hang shall be the one who sold us the rope.”- Karl Marx

5. “Let the ruling classes tremble at a Communistic revolution. The proletarians have nothing to lose but their chains. They have a world to win.”- Karl Marx

6. “Reason has always existed, but not always in a reasonable form.”- Karl Marx

7. “I am nothing but I must be everything.”- Karl Marx

8. “To be radical is to grasp things by the root.”- Karl Marx

9. “Go on, get out! Last words are for fools who haven’t said enough!”- Karl Marx

11. “Religion is the impotence of the human mind to deal with occurrences it cannot understand.”- Karl Marx

Marx is expressing his belief that religion is a way for people to cope with the things in life that they don’t understand. He argues that when people are faced with difficult circumstances, they often turn to religion as a way to find comfort.

This quote speaks to the power of religion in providing hope and peace in times of trouble. It also highlights Marx’s view of religion as a crutch for those who cannot deal with the challenges of life. Whether you agree or disagree with Marx’s view, there is no denying that religion plays an important role in many people’s lives.

12. “The proletarians have nothing to loose but their chains. They have a world to win.”- Karl Marx

13. “If anything is certain, it is that I myself am not a Marxist.”- Karl Marx

14. “There is no royal road to science, and only those who do not dread the fatiguing climb of its steep paths have a chance of gaining its luminous summits.”- Karl Marx

15. “Under no pretext should arms and ammunition be surrendered; any attempt to disarm the workers must be frustrated, by force if necessary”- Karl Marx

16. “In proportion therefore, as the repulsiveness of the work increases, the wage decreases.”- Karl Marx

17. “Religion is the sigh of the oppressed creature, the heart of a heartless world and the soul of soulless conditions. It is the opium of the people.”- Karl Marx

18. “The tradition of all dead generations weighs like a nightmare on the brains of the living.”- Karl Marx

19. “Communism is the riddle of history solved, and it knows itself to be this solution.”- Karl Marx

20. “We have no compassion and we ask no compassion from you. When our turn comes, we shall not make excuses for the terror.” – Karl Marx

21. “Society does not consist of individuals, but expresses the sum of interrelations, the relations within which these individuals stand.”- Karl Marx

Marx emphasizes the importance of social relationships and interactions in shaping society. He argues that individuals are not isolated entities but rather products of their environment and the people they interact with.

This perspective is known as social determinism, and it has been used to explain a wide range of phenomena, from economic inequality to crime. While some may argue that individuals have the power to shape their own destiny, Marx’s quote provides a valuable perspective on the role that society plays in shaping who we are.

22. “Labor in the white skin can never free itself as long as labor in the black skin is branded.”- Karl Marx

24. “The ruling ideas of each age have ever been the ideas of its ruling class.”- Karl Marx

25. “The production of too many useful things results in too many useless people.”- Karl Marx

26. “Capital is dead labour, which, vampire-like, lives only by sucking living labour, and lives the more, the more labour it sucks.”- Karl Marx

27. “I am a machine condemned to devour books.”- Karl Marx

28. “The education of all children, from the moment that they can get along without a mother’s care, shall be in state institutions.”- Karl Marx

29. “The theory of Communists may be summed up in the single sentence: Abolition of private property.”- Karl Marx

30.“It is well known how the monks wrote silly lives of Catholic Saints over the manuscripts on which the classical works of ancient heathendom had been written.”- Karl Marx

31. “Accumulate, accumulate! This is Moses and the Prophets!”- Karl Marx

In this quote, Karl Marx is urging workers to accumulate wealth. He believes that this is the key to achieving economic and social justice. By amassing wealth, workers will be able to gain power and eventually create a more just society.

This quote reflects Marx’s beliefs about the role of workers in society. He believed that they were the force that would ultimately lead to social change. Workers must band together and use their collective power to improve their living conditions and create a more fair and just society.

32. “Money is the alienated essence of man’s labor and life; and this alien essence dominates him as he worships it.”- Karl Marx

33. “Necessity is blind until it becomes conscious. Freedom is the consciousness of necessity.”- Karl Marx

34. “The road to hell is paved with good intentions.”- Karl Marx

35. “Education is free. Freedoom of education shall be enjoyed under the condition fixed by law and under the supreme control of the state”- Karl Marx

36. “To be radical is to go to the root of the matter. For man, however, the root is man himself.”- Karl Marx

37. “Political power, properly so called, is merely the organised power of one class for oppressing another.”- Karl Marx

38. “All that is solid melts into air, all that is holy is profaned, and man is at last compelled to face with sober senses, his real conditions of life, and his relations with his kind.”- Karl Marx

39. “Moments are the elements of profit”- Karl Marx

40. “Social progress can be measured by the social position of the female sex.”- Karl Marx

41. “You must be aware that the reward for labor, and quantity of labor, are quite disparate things.”- Karl Marx

This quote by Karl Marx speaks to the inequality that exists between workers and those who profit from their labor. Too often, workers are not fairly compensated for their efforts, receiving only a fraction of the value that they generate. Meanwhile, those who own the means of production reap the lion’s share of the profits.

This widening gap between rich and poor is one of the most significant problems facing society today. Marx’s words serve as a reminder that we must fight to ensure that workers receive a fair wage for their labor. Only then can we create a more just and equitable world.

44. “All science would be superfluous if the outward appearance and the essence of things directly coincided.”- Karl Marx

45. “Society as a whole is more and more splitting up into two great hostile camps”- Karl Marx

47. “Philosophers have hitherto only interpreted the world in various ways; the point, however, is to change it.”- Karl Marx

49. “Once the inner connection is grasped, all theoretical belief in the permanent necessity of existing conditions collapses before their collapse in practice.”- Karl Marx

50. “In history as in nature, decay is the laboratory of life.”- Karl Marx

Marx always supported the thought that “The education of all children, from the moment, that they can think for themselves, shall be directed to the end that they may be able physicists, chemists, historians,… in a word philosophers, for each is a man.”

52. “The bourgeois sees in his wife a mere instrument of production.”- Karl Marx

53. “Every opinion based on scientific criticism I welcome.”- Karl Marx

55. “Only in community with others has each individual the means of cultivating his gifts in all directions; only in the community, therefore, is personal freedom possible.”- Karl Marx

56. “Atheism” … reminds one of children, assuring everyone who is ready to listen to them that they are not afraid of the bogy man.”- Karl Marx

57. “Sell a man a fish, he eats for a day, teach a man how to fish, you ruin a wonderful business opportunity”- Karl Marx

58. “The tradition of past generations weighs like the Alps on the brains of the living.”- Karl Marx

59. “Machinery which is not used is not capital.”- Karl Marx

60. “Perseus wore a magic cap down over his eyes and ears as a make-believe that there are no monsters.”- Karl Marx

In this quote, Karl Marx is making a comparison between the ancient Greek hero Perseus and the people of his own time. Just as Perseus wore a cap to block out the sight of monsters, Marx believed that people in his day were blinded by their own beliefs and refused to see the reality around them.

For Marx, the monsters were the injustice and inequality that existed in society. By wearing a “magic cap,” people were able to ignore the suffering of others and maintain their own comfortable lifestyle. While Marx’s analogy may seem harsh, it highlights an important truth: often, it is easier to turn a blind eye to problems than to face them head-on.

Karl Marx is one of the most quoted and renowned political philosophers in history. His theories on socialism and communism have shaped how people think about economics and social systems to this day.

While his philosophy has been criticized by many, it’s hard to deny the impact he’s had on the world. We hope you enjoyed these quotes from Karl Marx. If you have any suggestions for other famous quotes or historical figures, let us know!