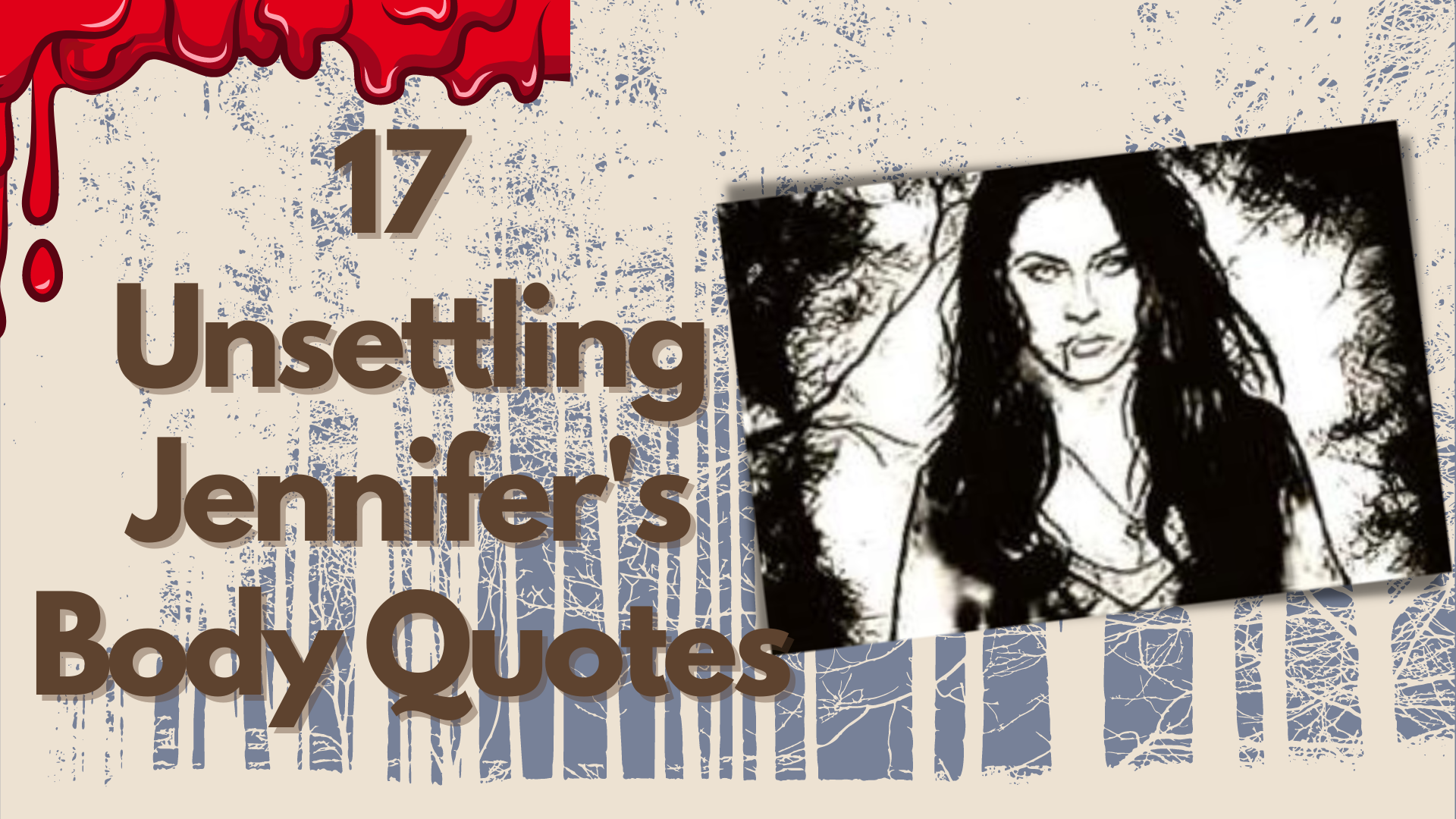 If there’s one thing that Jennifer’s Body taught us, it’s that you should always be careful about who you make deals with. The 2009 American comedy horror film,  follows a teenage girl named Jennifer who is possessed by a demon and starts feeding off the boys in her town.

While the film may not have been well-received by critics, it still contains some great quotes that are worth revisiting. In this article, we will take a look at some of the best quotes from Jennifer’s Body and analyze what they mean.

About the movie Jennifer’s Body

2009’s Jennifer’s Body was one of the most talked-about horror movies in recent memory. The film, directed by Karyn Kusama and written by Diablo Cody, starred Megan Fox as a high school student who is possessed by a demon and starts murdering her classmates.

Though the movie was not a box office success, it has since become a cult classic, with many fans appreciating its feminist subtext and dark sense of humor.

The movie had a modest budget of $16 million, but it only made $31.6 million at the worldwide box office. However, its critical reception was much more positive than its commercial performance would suggest.

Since its release, Jennifer’s Body has gained a loyal following among horror movie fans. It is frequently cited as one of the best horror movies of the past decade, and it has even been credited with helping to revitalize the genre.

If you’re looking for a smart, funny, and terrifying horror movie, Jennifer’s Body is definitely worth a watch.

Many people enjoy the dark humor and clever writing that Cody is known for. The movie also has some great visual effects, particularly in the scenes where Jennifer is feeding on her victims.  Let’s dive into some of the best quotes from Jennifer’s Body.

1. “People found it hard to believe that a babe like Jennifer would associate with a dork like me.” – Needy

I’m in survival mode right now, and I want us to get to a familiar place, and right now, I feel like that’s my van.”- Nikolai Wolf

3. “I don’t even know who Needy Lesnicky is anymore. I’m a different person now. A person who uses curse words and kicks orderlies and sees things that aren’t there. A very bad, very damaged person.” – Needy

4. “These are like smart bombs, you point them in the right direction and sh*t gets real.” – Jennifer

In the 2009 movie Jennifer’s Body, Jennifer (played by Megan Fox) is possessed by a demon and starts feeding off of the boys in her small town.

In one scene, she grabs her best friend Needy’s (played by Amanda Seyfried) breasts and says “These are like smart bombs, you point them in the right direction and sh*t gets real.”

This quote has become popular among movie fans and has been used to describe many different situations. Whether you’re trying to get a date or make a business deal, sometimes you’ve just got to go for it and hope for the best.

So next time you’re feeling unsure of yourself, remember what Jennifer said and go for it! Who knows, sh*t might just get real.

5. “Move on, Needy, it’s over. Life’s too short to be moping around about some white trash pig roast.” – Jennifer

6. “I am going to eat your soul—and sh*t it out, Lesnicky!– Jennifer

I thought you only murdered boys. – Needy

I go both ways.”– Jennifer

This quote has become iconic in pop culture and is often referenced by fans of the movie. It perfectly captures Jennifer’s character: she is demonic, bisexual, and unapologetically savage.

The quote also highlights the film’s feminist themes, as it challenges traditional gender norms. Whether you love or hate the movie, there’s no denying that this quote is one of its most iconic moments.

7. “Needy, I care about you. As a person, not just some girl I made love to for four minutes the other night, and I’m scared of what’s happening to you.” – Chip

8. “Sometimes, you might just get lucky in your miserable life.” – Needy

We’ve all had those moments where everything seems to be going wrong but then, suddenly, something amazing happens. Maybe we find a twenty-dollar bill on the ground or we run into an old friend.

These small pieces of good luck can make a huge difference in our lives, especially when we’re feeling down. So next time you’re having a bad day, remember that you might just get lucky. Who knows what could happen?

10. “Who cares about Jennifer, and those douche-bags with their douche-bag haircuts and their man-scara? People just burned to death.” – Chip

11. “I couldn’t bring myself to hurt you, but I was just so hungry, and ever since then I knew what I had to be strong; like when I’m full right now, I’m like, unkillable.” – Jennifer

12. “I need you frightened. I need you hopeless.” – Jennifer

In the 2009 movie Jennifer’s Body, the titular character says, “I need you frightened. I need you hopeless.” This quote speaks to the power that fear can have over people.

When we are afraid, we are more likely to make decisions that are not in our best interests. We may act impulsively or irrationally, out of a desire to simply escape from the source of our fear.

And even when we are not actively experiencing fear, it can still influence our choices, causing us to avoid certain people or situations that we associate with threats.

In this way, fear can have a profound and sometimes negative impact on our lives. But it can also be used to control and manipulate us.

As Jennifer’s quote suggests, those who know how to exploit our fears can use them to keep us in a state of constant anxiety and insecurity.

13. “Yeah well that’s how it is and plus you should be happy for me, I’m having the best day since like, Jesus invented the calendar.” – Jennifer

15. “No—I feel like boo-boo. My skin is breaking out and my hair is dull and lifeless. I feel like one of the normal girls.” – Jennifer

16. “You know what? You were never a good friend. Even when we were little you used to steal my toys and pour lemonade on my bed.”– Needy

The 2009 movie Jennifer’s Body is a cult classic for many reasons. One of the most memorable aspects of the film is the relationship between Jennifer and Needy. From the beginning, it’s clear that these two girls are best friends.

They rely on each other for support and protection. However, their friendship is put to the ultimate test when Jennifer is possessed by a demon and starts killing people. Needy is faced with a difficult decision: should she protect her friend, or stop her from killing again?

Jennifer’s Body premiered at the 2009 Toronto International Film Festival on September 10, 2009. It was released in the United States on September 18, 2009,

Though it wasn’t received well critically, we think that the 17 Nervy Jennifer’s Body Quotes will leave you entertained (and maybe a little scared). We hope you liked them! If you have any suggestions for quotes or other content let us know.