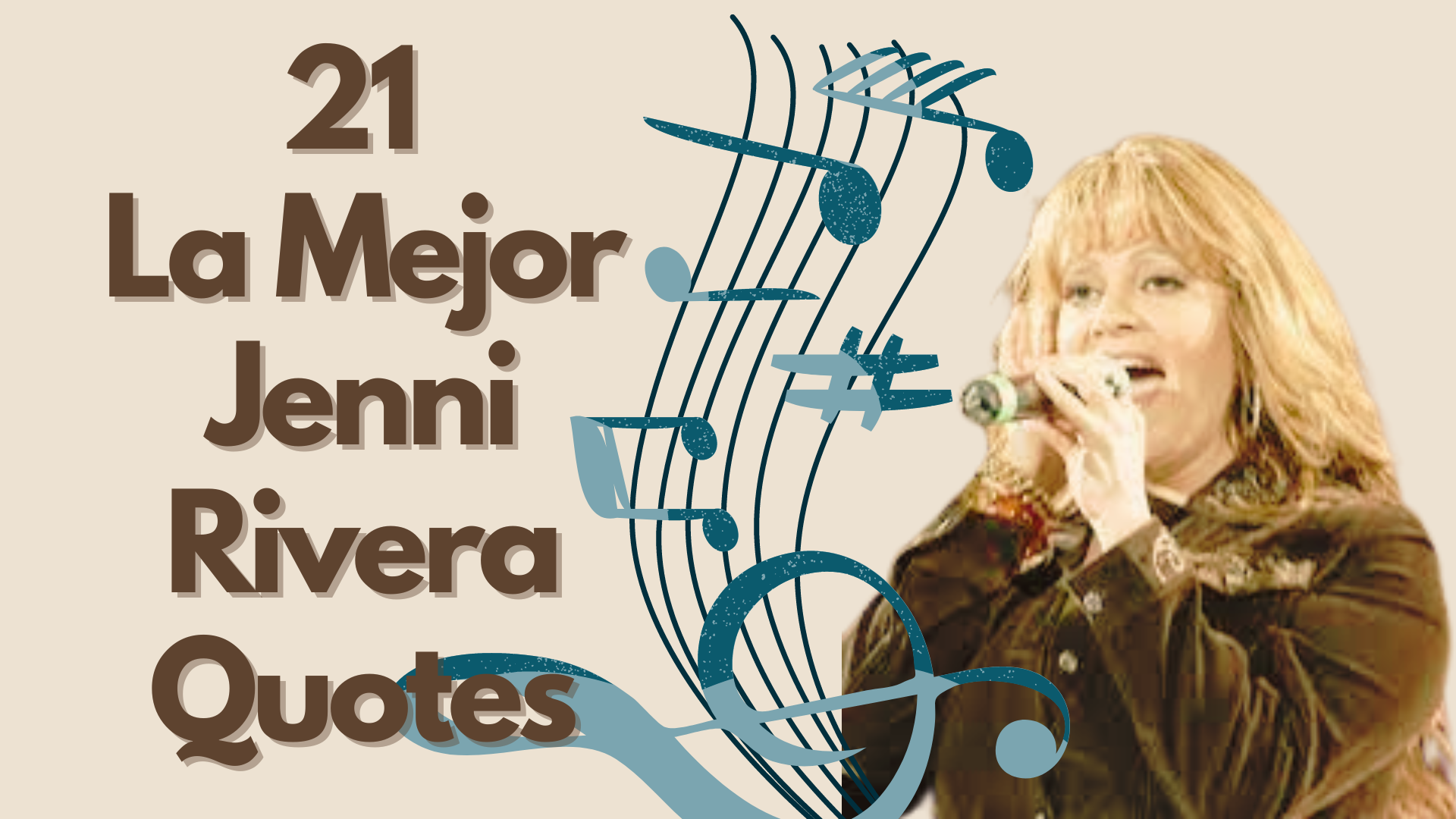 Jenni Rivera was a Mexican-American singer who was known for her powerful voice and outspoken personality. She became a star in the 1990s and continued to achieve success throughout her career.

Rivera was also well-known for her motivational quotes, which spoke to the heart of many people. In this article, we will take a look at some of her best quotes and discuss what made them so special.

She began her musical career singing mariachi music with her family, but later found success as a solo artist singing ranchera and banda music. Jenni Rivera sold over 20 million records during her career and won numerous awards, Latin Grammy Awards.

On December 9, 2012, She tragically died in a plane crash, but her legacy continues on through her music. Jenni Rivera was a beloved figure in the Latino community, and her impact is still felt today.

Jenni was often referred to as the “Queen of Banda” and was one of the most successful Latin recording artists of all time. Let’s have a look at the best quotes by Jenni Rivera:

1. “Whatever you do, Mija, do your best. Be different from everyone. Stand out.”-Jenni Rivera

This is great advice that everyone should live by! You should always try to do your best and be different from everyone else. Standing out can help you in so many ways.

It can help you get noticed by the right people, it can help you get ahead in your career, and it can simply make you feel good about yourself. So don’t be afraid to be different, and always strive to do your best. You’ll be glad you did!

Jenni’s quote is a great reminder that we should all stand up for ourselves and never let anyone take advantage of us. We should also remember that it’s okay to ask for help when we need it. We’re all human, and we all need support sometimes.

4. “Whenever I took a step forward, it seemed as though life was pushing me five steps back.”-Jenni Rivera

Life can be tough. There are always going to be obstacles in our way and it can feel like we’re constantly being pushed back. But we have to remember that life is also full of possibilities.

We just have to keep moving forward, even when it feels like we’re not making any progress. I’m reminded of a quote by Ralph Waldo Emerson: “Do not go where the path may lead, go instead where there is no path and leave a trail.”

Life is all about taking risks and forging our own path. So, next time you feel like you’re being pushed back, just keep moving forward. You never know what amazing things might be waiting for you around the corner.

5. “We never told on each other. That was an unspoken rule.”-Jenni Rivera

6. “It doesn’t bother me at all that some people think I am too outspoken.”-Jenni Rivera

In today’s world, it’s more important than ever to have a voice. With so much media and so many voices vying for attention, it can be easy to get lost in the noise. But if you’re confident in what you have to say, then don’t let anyone silence you.

Too often, people are afraid to speak their minds for fear of judgment or criticism. But if you believe in what you’re saying, then you shouldn’t let anything hold you back. So go out there and make your voice heard! The world needs to hear what you have to say.

7. “The people in the industry tried to make me change. If you want to make it in this genre, they said, you have to do this or that. A lot of women had to do sexual favors to get played on the radio. Fuck that. I wouldn’t do it. I wanted to make it based on my talent or not at all.”-Jenni Rivera

8. “I was not a girl who picked fights. I was a nerd, a straight-A student. I usually got along with everyone, but if a boy touched my butt, it was on. I would turn right around and sock him in the mouth and then get him down on the ground and start punching. Nobody was going to touch my ass and get away with it.”-Jenni Rivera

9. “When somebody else’s happiness makes you happy, it means you are a person with a big heart.”-Jenni Rivera

Happiness is contagious. When you see someone else smile, it’s impossible not to smile back. And when somebody close to you is happy, it can have a profound effect on your own mood.

Happiness is like a positive emotion that can be passed from one person to another. This is why it’s so important to surround yourself with positive people. Their happiness will rub off on you and make you happier as well.

So, next time you see someone else smiling, remember that their happiness isn’t just good for them – it’s good for you too!

10. “You can always trust me. I will never judge you.”-Jenni Rivera

Failure. It’s something we all experience at one point or another. It’s an inescapable part of life. And yet, for some reason, we often view failure as a negative thing. We see it as a sign that we’re not good enough, that we’re not cut out for what we’re trying to do.

And each time you stand up, you’re a little bit closer to achieving your goals. So embrace your failures and use them as motivation to keep pushing forward. You’ll be surprised at how far you can go.

13. “My mother never let on that anything was wrong. She kept her chin up and acted as if everything were just fine. So we did too.”-Jenni Rivera

14. “The key to success in life is getting up early.”-Jenni Rivera

There’s something truly magical about early mornings. The air is crisp and clean, the sun is just starting to peek over the horizon, and the world feels fresh and new. It’s no wonder that so many successful people credit their success to getting up early.

After all, there’s simply more time in the day to get things done. But getting up early isn’t just about checking items off your to-do list. It’s also about taking the time to enjoy the peace and quiet of the morning hours.

Whether you savor a cup of coffee on your porch or take a leisurely stroll through your neighborhood, taking the time to appreciate the small moments can make a big difference in your overall happiness.

So if you’re looking for a way to improve your life, there’s no better place to start than by getting up early.

15. “Thank you for accepting me as I am, with my virtues and defects.”-Jenni Rivera

16. “I wasn’t going out easy. I was the gangsta bitch from Long Beach. The Rivera Rebel who never lost a fight.”-Jenni Rivera

17. “No one else has ever opened doors for me. I opened them myself.”-Jenni Rivera

In today’s society, it is easy to get lost in the shuffle. With so many people competing for jobs, love, and attention, it can be easy to feel like you are not good enough.

However, it is important to remember that you are the only one who can control your own destiny. As the saying goes, “No one else has ever opened doors for me. I opened them myself.”

This is an important lesson to remember when faced with adversity. No one else is going to hand you success on a silver platter.

You have to go out and grab it yourself. So don’t be afraid to take risks and seize the opportunity when it comes your way. Remember, only you can determine your own success.

18. “Perhaps trying to move away from my problems and focus on the positive is the best I can do.”-Jenni Rivera

19. “Being a mother by far is my favorite and most important career.”-Jenni Rivera

20. “I waited so long to see if you’d change. And you didn’t even look at me.”-Jenni Rivera

21. “Mexican music runs through my veins. I loved it. Growing up, my father didn’t allow us to listen to English music at home. That’s all I heard. I had no choice.”-Jenni Rivera

Music has always been an important part of Mexican culture. Traditional folk music, mariachi bands, and contemporary pop performers all play a significant role in the country’s musical landscape.

For many Mexicans, music is a source of pride and identity. It helps to connect them to their heritage and to the larger community. Jenni Rivera, a famous Mexican-American singer, grew up listening to Mexican music.

In an interview, she said that it “runs through her veins.” She recalls that her father didn’t allow her to listen to English music at home, but she had no choice. “That’s all I heard,” she said.

Rivera went on to become one of the most popular Mexican-American singers of all time. Her music reflects her deep connection to her Mexican roots. For Rivera and many other Mexicans, music is an essential part of life.

Jenni Rivera was not only an amazing singer, but she was also a powerful voice for the Mexican-American community.

These 21 quotes show off her wit, wisdom, and passion for life. We hope you enjoyed them! If you have any favorite Jenni Rivera quotes that we missed, let us know in the comments.