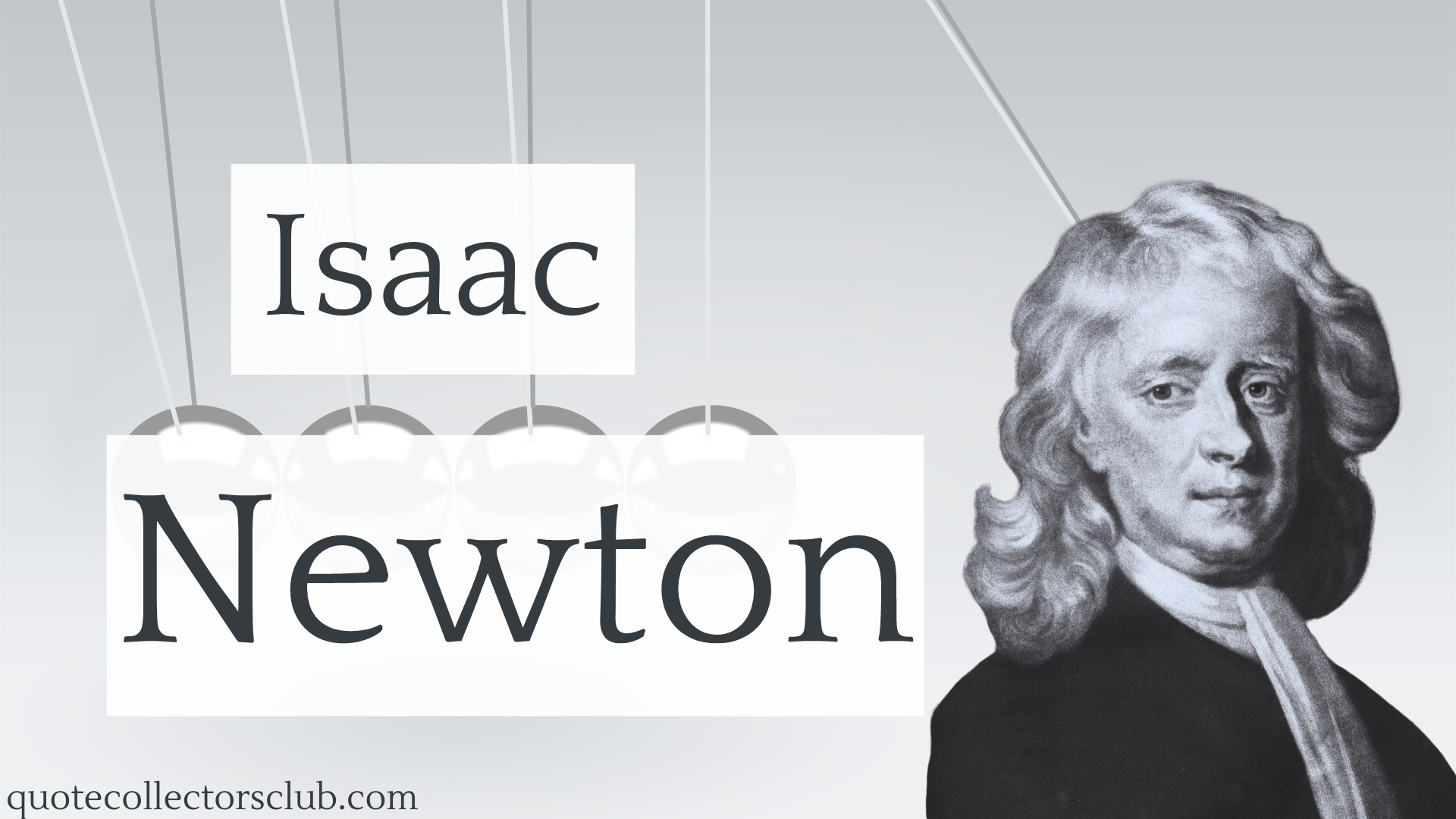 Isaac Newton is considered one of the most brilliant minds in history. He is best known for his work in mathematics and physics, but he also significantly contributed to other fields such as optics, astronomy, alchemy, and theology.

In this blog post, we will look at some of his most famous quotes.

These quotes offer a glimpse into the mind of one of the most influential scientists who ever lived!

One of the most influential scientists of all time, Isaac Newton, was born in 1642 in Lincolnshire, England. He attended Cambridge University, where he studied mathematics, physics, and astronomy.

In 1687, he published his most famous work, Philosophiae Naturalis Principia Mathematica, which laid the foundation for classical mechanics. Newton’s three laws of motion remain fundamental to physics to this day. In addition to his work in mathematics and physics, Newton made significant contributions to optics and alchemy.

He discovered that white light is actually composed of all the colors of the spectrum, and he developed a new theory of color based on the refraction of light. His work in alchemy led him to discover the element mercury. A towering figure in the scientific revolution, Newton’s work transformed our understanding of the natural world and laid the foundation for modern science.

Joseph-Louis Lagrange, a mathematician, once said that Newton was the greatest genius who ever lived. He also added that Newton was extremely fortunate because there is only “one system of the world to establish.” Let’s remember the great genius  with some of his best quotes:

1. “If I have seen further, it is by standing on the shoulders of Giants.”- Isaac Newton

Standing on the shoulders of giants is a metaphor for learning from the accomplishments of others. Isaac Newton was referencing the work of previous scientists who had laid the groundwork for his own discoveries.

2. “I can calculate the motion of heavenly bodies but not the madness of people.”- Isaac Newton

3. “Nature is pleased with simplicity. And nature is no dummy”- Isaac Newton

5. “Tact is the knack of making a point without making an enemy.”- Isaac Newton

6. “Gravity explains the motions of the planets, but it cannot explain who sets the planets in motion.”- Isaac Newton

7. “Truth is ever to be found in the simplicity, and not in the multiplicity and confusion of things.”- Isaac Newton

8. “No great discovery was ever made without a bold guess.”- Isaac Newton

10. “If I have ever made any valuable discoveries, it has been due more to patient attention than to any other talent”- Isaac Newton

11. “And to every action, there is always an equal and opposite or contrary reaction”- Isaac Newton

The above quote by Isaac Newton is often used to describe the basic principle of physics known as the law of action and reaction. This law states that for every action, there is an equal and opposite reaction. In other words, if one object exerts a force on another object, the second object will exert an equal and opposite force back on the first.

This concept can be seen in many everyday situations, such as when a person pushes a swing or when a balloon is released into the air. The law of action and reaction is a fundamental law of physics that helps us to understand the world around us.

14. “Live your life as an Exclamation rather than an Explanation”- Isaac Newton

15. “You have to make the rules, not follow them”- Isaac Newton

16. “Sir Isaac Newton was asked how he discovered the law of gravity. He replied, “By thinking about it all the time.”- Isaac Newton

17. “To myself, I am only a child playing on the beach, while vast oceans of truth lie undiscovered before me”- Isaac Newton

18. “Tact is the art of making a point without making an enemy.”- Isaac Newton

19. “Whence arises all that order and beauty we see in the world?”- Isaac Newton

20. “To explain all nature is too difficult a task for any one man or even for any one age”- Isaac Newton

In this famous quote, Isaac Newton emphasizes the importance of truth over all else. For him, truth is the greatest friend because it is always reliable and trustworthy. In contrast, friends can be fickle and unreliable. Even the great philosophers Plato and Aristotle are not as important to Newton as the truth.

This is because Newton knows that, in the end, only the truth can be relied upon. It is always there for us, even when our friends are not. This quote reminds us of the importance of seeking the truth and not letting ourselves be misled by others.

23. “Truth is the offspring of silence and meditation. I keep the subject constantly before me and wait ’til the first dawnings open slowly, by little and little, into full and clear light.”- Isaac Newton

24. “In the absence of any other proof, the thumb alone would convince me of God’s existence.”- Isaac Newton

25. “To every action, there is always opposed an equal reaction.”- Isaac Newton

26. “There are more sure marks of authenticity in the Bible that in any profane history”- Isaac Newton

27. “If others would think as hard as I did, then they would get

28. “Gravity explains the motions of the planets, but it cannot explain who set the planets in motion.”- Isaac Newton

29. “As a blind man has no idea of colors, so have we no idea of the manner by which the all-wise God perceives and understands all things”- Isaac Newton

30. “If I have done great things, it’s because I was standing in the closet of smart men taking notes and then publishing their ideas as my own.”- Isaac Newton

31. “They who search after the Philosopher’s Stone [are] by their own rules obliged to a strict and religious life.”- Isaac Newton

Isaac Newton was one of the most influential scientists of all time, and his work laid the foundation for many of the advances we enjoy today. He is also known for his keen interest in alchemy, a popular topic during his lifetime. In this quote, Newton is saying that those who are searching for the Philosopher’s Stone, which was believed to have magical properties, must live a life that is disciplined and religious.

While this may seem like an unusual statement coming from a scientist, it actually makes a lot of sense. The philosopher’s stone was thought to be able to turn base metals into gold, so those who were seeking it would need to be very focused and dedicated to find it. In many ways, Newton’s quote can be seen as a metaphor for the scientific process itself. Scientists must be diligent and disciplined in their work if they hope to make discoveries that will change the world.

33. “Tis much better to do a little with certainty & leave the rest for others that come after than to explain all things by conjecture without making sure of any thing.”- Isaac Newton

34. “The more time and devotion one spends in the worship of false gods, the less he is able to spend in that of the True One.”- Isaac Newton

35. “Resistance is usually ascribed to bodies at rest, and impulse to those in motion; but motion and rest, as commonly conceived, are only relatively distinguished; nor are those bodies always truly at rest, which commonly are taken to be so.”- Isaac Newton

36. “That one body should act upon another through a vacuum without the mediation of anything else is so great an absurdity that no man suited to do science…can ever fall into it,…..Gravity must be caused by an agent…but whether that agent be material or immaterial I leave to my readers.”– Isaac Newton

37. “For it became him [God] who created them [the atoms] to set them in order. And if he did so, it’s unphilosophical to seek for any other Origin of the World, or to pretend that it might arise out of a Chaos by the mere Laws of Nature.”- Isaac Newton

38. “I do not know what I may appear to the world; but to myself I seem to have been only like a boy playing on the seashore, and diverting myself in now and then finding a smoother pebble or a prettier shell than ordinary, whilst the great ocean of truth lay all undiscovered before me.”– Isaac Newton

39. “This most elegant system of the sun, planets, and comets could not have arisen without the design and dominion of an intelligent and powerful being.”- Isaac Newton

41. “We account the Scriptures of God to be the most sublime philosophy. I find more sure marks of authenticity in the Bible than in any profane history whatever.”- Isaac Newton

Newton was not only one of the greatest mathematicians and physicists of all time, but he was also a deeply religious man. In this quote, he expresses his belief that the Bible is not just a book of myths and stories but rather a source of profound truth. For Newton, the Bible was a kind of blueprint for understanding the nature of reality.

In his view, its accounts of creation, miracles, and prophecy could be interpreted as hidden code, revealing to those who were willing to look deeply enough the secrets of the universe. Newton believed that by studying the Bible, we could learn about God and the workings of His creation. In this way, Newton saw the Bible not as an outdated book to be ignored or ridiculed but as a treasure trove of knowledge waiting to be discovered.

42. “We are to admit no more causes of natural things than such as are both true and sufficient to explain their appearances.”- Isaac Newton

43. “Atheism is so senseless. When I look at the solar system, I see the earth at the right distance from the sun to receive the proper amounts of heat and light. This did not happen by chance.”- Isaac Newton

44. “God gave the prophecies, not to gratify men’s curiosity by enabling them to fore know things, but that after they were fulfilled they might be interpreted by the event, and His own providence, not the interpreters, be thereby manifested to the world.”- Isaac Newton

45. “Nature is exceedingly simple and harmonious with itself.”- Isaac Newton

46. “No sciences are better attested than the religion of the Bible.”- Isaac Newton

47. “What the space that is empty of bodies is filled with”- Isaac Newton

48. “Philosophy is such an impertinently litigious lady that a man had as good be engaged in lawsuits as have to do with her.”- Isaac Newton

49. “Yeah, sex is cool, but have you tried solving the brachistochrone problem in a single night?”– Isaac Newton

50. “Men build too many walls and not enough bridges.”- Isaac Newton

In today’s world, it’s all too easy to erect barriers between people. The division is rampant, whether based on race, religion, politics, or other factors. And yet, bridges are essential for bringing people together.

They provide a way to cross the divide and connect with others, even if we don’t share the same beliefs or experiences. By building more bridges and fewer walls, we can begin to heal the divisions in our world. Imagine what we could accomplish if we came together instead of staying apart. It’s a possibility that Newton himself would no doubt be excited about.

Isaac Newton was one of the most influential scientists in history. His insights into gravity and motion are still studied and applied today. In addition to his scientific discoveries, he also had a lot of wisdom to share about life.

Here are some of our favorite quotes from Isaac Newton. What do you think? Do they still hold true today? How have you applied these principles in your own life? Let us know in the comments below!