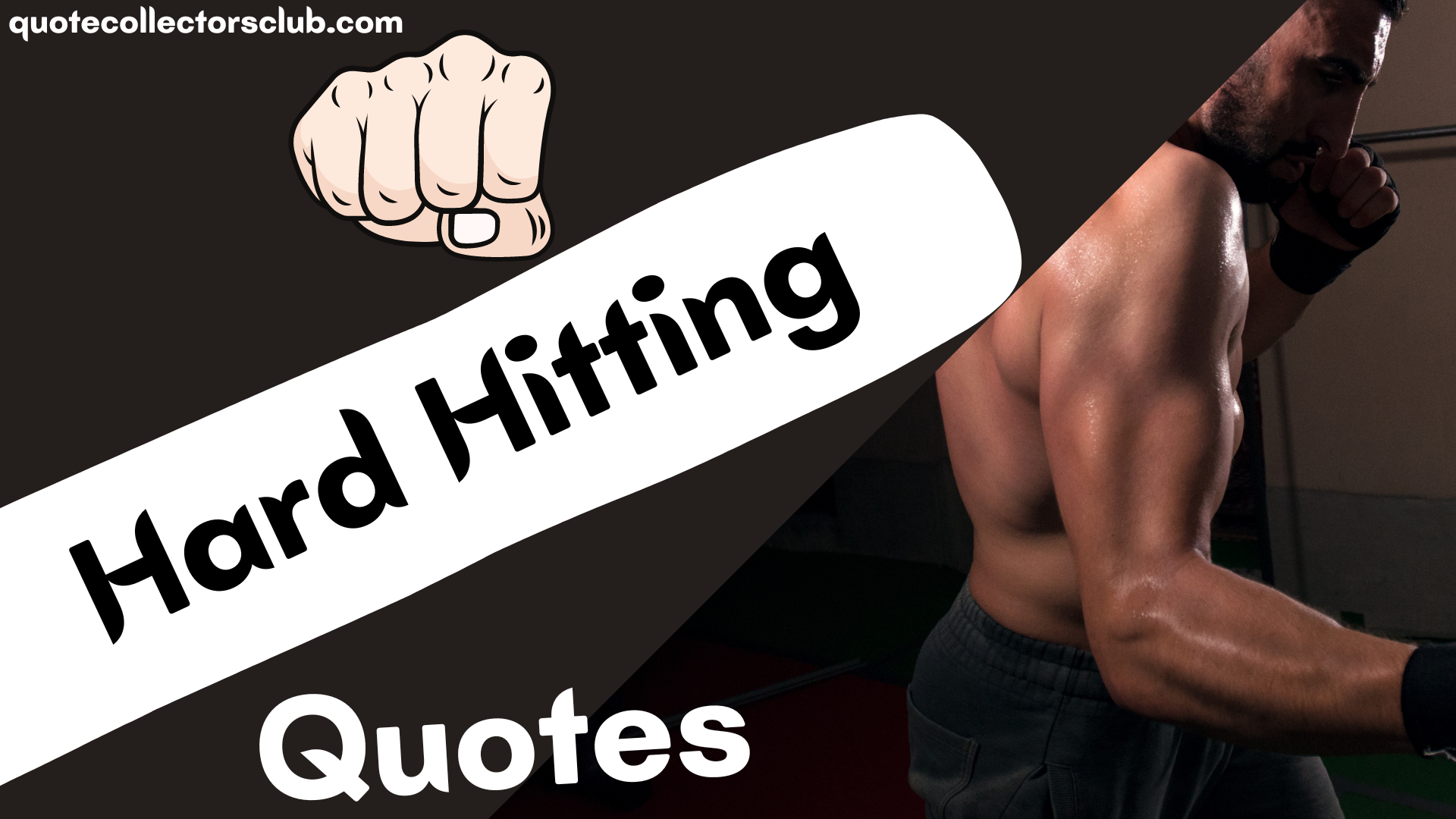 We all need a dose of inspiration every now and then to help us get through tough times. That’s why hard-hitting quotes can be so powerful, they motivate us to take action and improve our lives. Here in this blog post, we are going to look at some of the most hard-hitting quotes that will change your outlook on life. If you’re feeling down, these quotes will give you the boost you need to keep moving forward!

When You are Feeling Down and want to Push Yourself

Life can be tough. There are times when you feel like you can’t keep going like you want to give up. But it’s in those moments that you need to be the most resilient. The most determined. That’s when you need to push yourself. And what better way to do that than with some hard-hitting quotes? Quotes that will make you question your doubts, that will inspire you to keep going even when things are tough.

Here are some of the best Hard Hitting Quotes

Sometimes, the best way to get out of a funk is to take action and do something; The following quotes can do exactly that:

1. “Sometimes, you will never know the value of a moment until it becomes a memory.” – Theodor Seuss Geisel

The quote says that sometimes you won’t realize how important a moment is until it’s over, and you’re left with just the memory. This is often the case with happy memories because they only become bittersweet once they’re in the past.

But it can also apply to moments that were difficult or even painful at the time.

Only when we look back on them can we see how much they shaped us and made us who we are today.

2. “Most people never find the good one, because they never let go of the wrong one.” – Anonymous

The quote is often used as encouragement to people who are struggling. It conveys the message that if you don’t put up a fight for something, you can’t expect to win. The quote also suggests that if you don’t fight for what you want, you might lose it anyway. While the quote is motivational, it also has a lot of truth to it. In many cases, the things we want in life won’t come easy.

We have to be willing to fight for them. And even if we don’t always win, at least we know we tried. Without struggle, we would never grow or learn or achieve anything worthwhile.

4. “Never miss out on a good person that can make your life great just because they’re difficult. The good ones never come easy.” – Sizzle

5.  “Sometimes, when things are falling apart, they may actually be falling into place.” – Anonymous

At first glance, the above quote may seem like a simple platitude meant to offer comfort in difficult times. However, upon further examination, there is actually a lot of truth to it. Life is constantly changing, and often those changes can be overwhelming.

It can be easy to feel like everything is falling apart when, in reality, it may just be falling into place. The end of a relationship may signal the beginning of a new and more fulfilling one. The loss of a job may provide an opportunity to pursue a longtime dream.

Sometimes, it takes hitting rock bottom before we are finally able to start rebuilding our lives in a way that truly makes us happy.

6. “Yesterday, I was clever, so I wanted to change the world. Today, I am wise, so I am changing myself.” – Rumi

7. “Be nice to people even if your own heart is breaking, because there’s no need to break theirs too.” – Shubh Narwan

It can be difficult to remain cheerful when your own heart is heavy with sadness, but it is important to remember that everyone is fighting their own battle. You never know what someone else is going through, so it is always best to err on the side of kindness.

A simple act of compassion can make a world of difference for someone who is struggling. Show them that they are not alone. It costs nothing to be nice, but the rewards are immeasurable.

8. “One can choose to go back toward safety or forward toward growth. Growth must be chosen again and again—fear must be overcome again and again.” – Abraham Maslow

9. “To live is the rarest thing in the world. Most people just exist.” – Oscar Wilde

10. “If you don’t stand for something, you’ll fall for anything.” – Anonymous

It’s a powerful statement that speaks to the importance of having convictions and being willing to stand up for them. Too often, people go through life without any real direction or purpose. As a result, they’re easily swayed by others and can end up getting taken advantage of.

On the other hand, people who have a clear sense of who they are and what they believe in are much less likely to be influenced by outside forces. They’re also more likely to be successful in achieving their goals.

11. “What is coming is better than what’s gone. Let this belief aim you in the direction you need to go.” – Karen Salmansohn

13. “The man who removes a mountain begins by carrying away small stones.” – William Faulkner

15. “Be yourself, everyone else is already taken.” – Oscar Wilde

The quote often encourages people to be unique and not worry about what others think. It is a reminder that we all have our own individual quirks and qualities that make us special. The world would be a very boring place if we were all the same! So embrace your uniqueness, and don’t be afraid to show the world who you really are.

16. “Never bother thinking about going back and changing the beginning. Start from now and try changing the ending.” – Anonymous

17. “Bad things happen to us to teach us how to look at good things in a whole new light.” – Anonymous

18. “The heart of a fool is in his mouth, but the mouth of a wise man is in his heart.” – Benjamin Franklin

19. “He who is untrue to his own cause cannot command the respect of others.” – Albert Einstein

No matter how dark and hopeless things may seem, there is always the possibility of finding something valuable in the wreckage. This sentiment is echoed in many different cultures and religions. For example, the ancient story of The Alchemist tells of a man who sets out in search of a lost treasure.

Along the way, he faces many challenges and loses everything he holds dear. However, he eventually finds the treasure he is seeking and, in the process, learns some valuable lessons about himself.

22. “People have a hard time letting go of their suffering. Out of a fear of the unknown, they prefer suffering that is familiar.” – Thich Nhat Hanh

23. “Don’t regret it when you are broken, because that’s how the light gets in.” – Anonymous

24. “You thought you wanted her, but she is made of thunder and lightning, and you were afraid of a little rain.” – Rachel Firmin

25. “Every strength is also a weakness. The opposite is true as well.” – Neil Strauss

For example, someone who is not afraid to take risks might also be seen as impulsive. Someone who is not concerned with what others think of them might also be seen as insensitive. In general, it is important to remember that no one is perfect and that everyone has both strengths and weaknesses. Therefore, it is important to try to see both sides of the coin before making any judgments.

26. “Every saint has a past, and every sinner has a future.” – Oscar Wilde

Life is always filled with ups and downs, like a roller-coaster ride. And there are sometimes when we feel down at those moments we need to push ourselves. The above quotes can help you to see the brighter side; write them down, read them out loud, or carry them around with you, whatever works for you. And don’t forget to share your favorite motivational quotes with your loved ones.