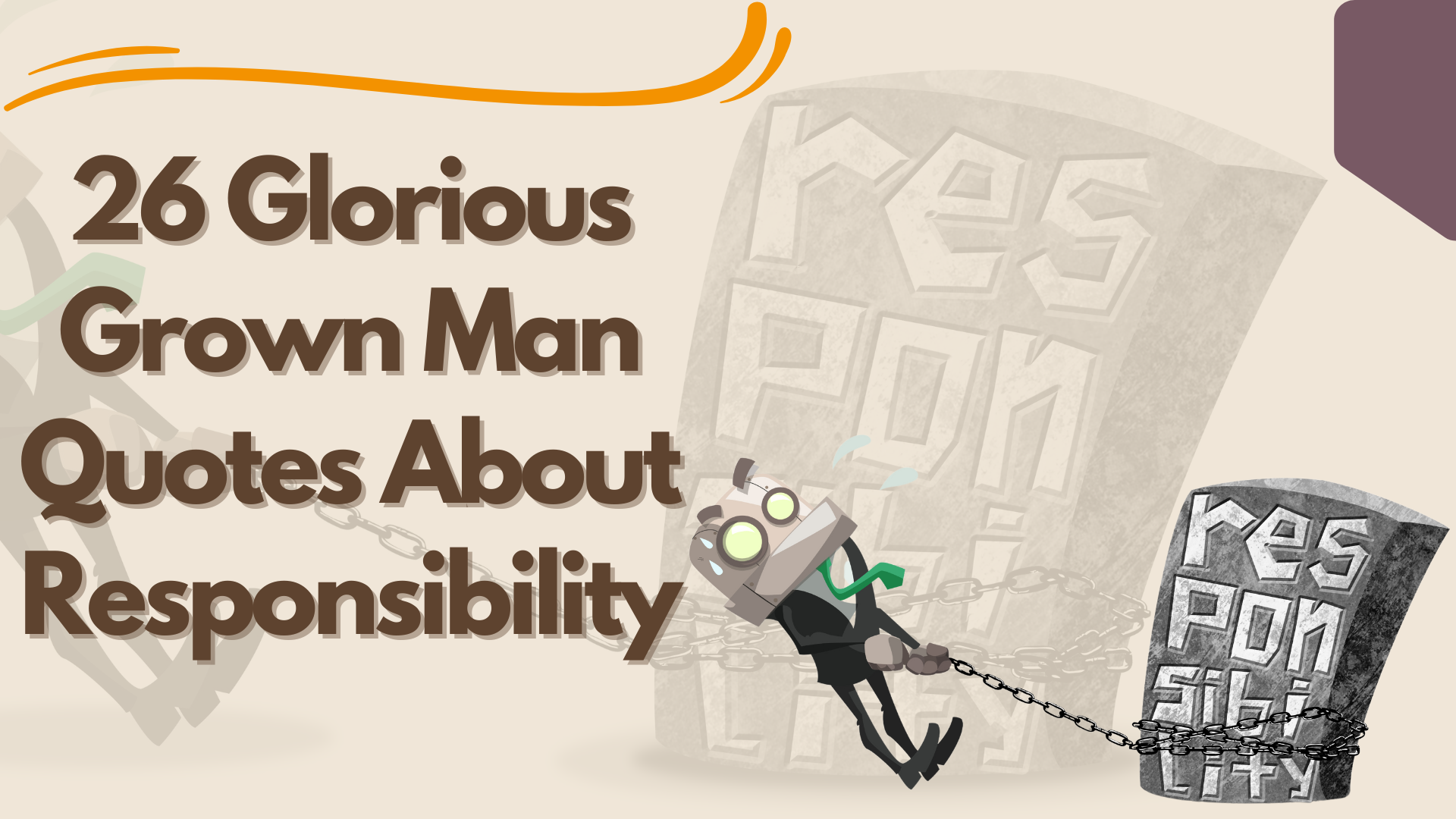 A grown man knows his responsibilities and takes them seriously. He doesn’t make excuses, and he doesn’t shy away from hard work. He understands the importance of taking care of himself and those around him.

A grown man is strong, but he is also compassionate. He knows how to have fun, but he also knows when it’s time to be serious. In this article, we will discuss what it means to be a grown man, and we will also share some powerful quotes that illustrate this concept.

What does it mean to be a Grown Man?

A grown man is someone who is emotionally and mentally mature. He is secure in himself, his beliefs, and his decisions. A grown man knows how to manage his finances and is responsible for his own wellbeing.

He has a strong work ethic and is constantly striving to improve himself. A grown man respects women and treats them as equals. He is a gentleman but also knows how to have fun.

A grown man is someone who can be relied on in any situation. He is someone who others look up to and admire. In short, being a grown man means being the best version of yourself that you can be.

It means being someone that others can count on, no matter what the situation may be. It means being a role model for those around you. So, if you’re wondering what it means to be a grown man, simply ask yourself: Am I the best that I can be?

If not, then it’s time to start working towards that goal. Remember, being a grown man isn’t about age – it’s about maturity, responsibility, and respect. attain those things, and you’ll be well on your way to becoming the best version of yourself.

But, at the end of the day, being a grown man is about being the best version of yourself that you can be. And these quotes will inspire you to do just that.

1. “Sometimes you have to grow up before you appreciate how you grew up.”- Daniel Black

There are times in life when we have to think and act like mature people despite being young. This can be due to tough circumstances, such as having to take care of younger siblings or dealing with difficult home life.

It can also be due to opportunities that present themselves, such as being chosen for a leadership role at school or work. Whatever the cause, it is important to remember that we are still young and should not let these things define us.

We should use them as experiences that make us stronger and wiser and use them to help others who may be going through similar situations. Life is full of challenges, but it is how we face them that defines us. So even when we have to act like adults, let’s never forget our youthful spirit!

2. “You are not really grown up until you see and understand your weaknesses.” – Dr T.P.Chia

3. “I find what I do for a living really funny. I mean, acting is kind of a hilarious thing for a grown man to call a job.”- Christian Bale

4. “When I was growing up, I remember my mother saying, “Your friends are like elevators; they will bring you up or down – the choice is yours.”- David DeNotaris

5. “Growing old is mandatory; growing up is optional.”- Chili Davis

In today’s society, it is not uncommon to see people in their twenties and thirties who are still behaving like children. They may be working jobs and earning paychecks, but they haven’t yet taken on the responsibilities that come with being an adult. In many ways, growing up is a choice.

You can choose to act your age and take on the challenges of adulthood, or you can choose to stay young and carefree. Of course, growing old is inevitable. But how quickly you grow up is entirely up to you.

So, the next time someone tells you that you’re “growing up too fast,” take it as a compliment. It means you’re on the right track.

6. “Part of growing up was learning not to be quite that honest – learning when it was better to lie, rather than to hurt someone with the truth.”- Jodi Picoult

7. “I’m a grown man now, I’ve got a family, I understand responsibility.”- R-Truth

8. “A mother is a child’s first teacher. We are raising the people who will grow up to influence society and the world.”- Marie Osmond

9. “I wanted to go the NBA and win a championship because I’ve never seen a grown man cry the way Scottie Pippen and Michael Jordan cried when they won a championship.”- Iman Shumpert

10. “Maturity is when your world opens up and you realize that you are not the center of it.”- M.J. Croan

As you grow up, you realize that the world does not revolve around you. You are just one person in a vast and complex ecosystem. This can be both scary and exhilarating.

On the one hand, you are no longer the center of attention. Your parents and guardians are not always there to protect you. But on the other hand, you now have the opportunity to explore the world and find your place in it.

You can make decisions for yourself and shape your own future. This can be a time of great growth and discovery. So embrace maturity and all that it has to offer. It is an exciting time full of possibilities.

11. “As children, we don’t get to pick the ways in which we’re loved. But then we grow up, and if we’re smart and prepared and very determined, every once in a while we actually do get the life we wanted.” – Oprah Winfrey

13. “I long for the day when advertising will become a business for a grown man.”- Howard Gossage

As a grown man, I ain’t got time for no-nonsense. I don’t have time for all that ‘you say, she says.’ I’m a man of action. When something needs to be done, I do it. I don’t sit around and wait for other people to do things for me.

I take charge. And I expect other people to do the same. If someone does something that I don’t like, I tell them about it. I don’t hold back.

I say what’s on my mind. And if someone doesn’t like what I have to say, then they can just stop talking to me. I’m not going to change who I am just to please somebody else. Life’s too short for that.

15. “To grow up is to stop putting blame on parents.”- Maya Angelou

In many cases, it can feel like it’s always our parents’ fault. However, as we get older, we start to realize that responsibility isn’t always so black and white.

Sure, our parents may have made some bad choices when we were growing up, but at a certain point, we need to stop blaming them for everything and take responsibility for our own lives.

It’s not easy, but it’s an important part of growing up. So next time you’re tempted to blame your parents for your problems, remember that you’re not a kid anymore – it’s time to take responsibility for your own life.

16. “Basically when you whittle everything away, I’m a grown man who puts on makeup.”- Brad Pitt

17. “Age is a necessary but insufficient requirement for growing up. There are immature old people, and there are appropriately mature young people.”- Henry Cloud

Any man can be a leader, regardless of age. It takes courage and conviction to stand up for what you believe in and to inspire others to do the same. Leaders are not born; they are made.

And anyone who has the strength of character to stand up for what they believe in can be a leader. Whether you are young or old, leadership is something that is earned, not given. So, if you want to be a leader, go out and earn it.

The world needs more leaders, so don’t let anyone tell you that you’re too grown up to make a difference. You have the power to change the world, so go out there and use it. Be the leader you want to see in the world. It all starts with you.

19. “I’m a grown man. You know, I’ve been in a lot of scrapes, but I never felt like I got so – there are probably a lot of things I should have done that I didn’t do.”- James Stockdale

20. “There are some places so beautiful they can make a grown man break down and weep.”- Edward Abbey

There are some places on this earth that are so staggeringly beautiful that they can take your breath away. Whether it’s the vastness of the Grand Canyon or the intricate patterns of a snowflake, there are moments when the natural world seems too good to be true.

And in those moments, it’s not uncommon to feel a sense of overwhelming emotion. For some, seeing something so beautiful can be a deeply spiritual experience.

Others may simply feel a sense of joy and wonder. But regardless of how it manifests, beauty has the power to touch us in a way that nothing else can.

So next time you find yourself in front of a breathtaking view, take a moment to let the beauty wash over you. And who knows? You may just find yourself shedding a few tears along the way.

21. “Nothing in progression can rest on its original plan. We may as well think of rocking a grown man in the cradle of an infant.” -Edmund Burke

22. “Fiction is to the grown man what play is to the child; it is there that he changes the atmosphere and tenor of his life.”- Robert Louis Stevenson

24. “You know children are growing up when they start asking questions that have answers.”- John J. Plomp

25. “Soft, sweet things with a lot of fancy dressing – that’s what a little boy loves to eat and a grown man prefers to marry.”- Helen Rowland

There’s something about soft, sweet things that just make them irresistible – especially when they’re covered in a rich, creamy sauce or frosting. It’s no wonder that little boys and grown men alike seem to have a weakness for these types of dishes.

Whether it’s a platter of freshly-baked cookies or a towering slice of cake, these treats are sure to please any crowd.

And while some might say that these indulgences are best enjoyed in moderation, we say that life is too short of denying yourself the occasional sweet treat. So go ahead and indulge your craving – you won’t regret it!

Being a grown man is more than just being physically mature. It’s about having the inner strength to make smart decisions, taking responsibility for your actions, and living with integrity.

That’s why we gathered these 26 quotes about growing up and being a man. We hope they inspire you to be the best-grown man you can be. Which of these quotes resonated most with you? Do you have any other favorite quotes about being a grown man? Let us know in the comments below.