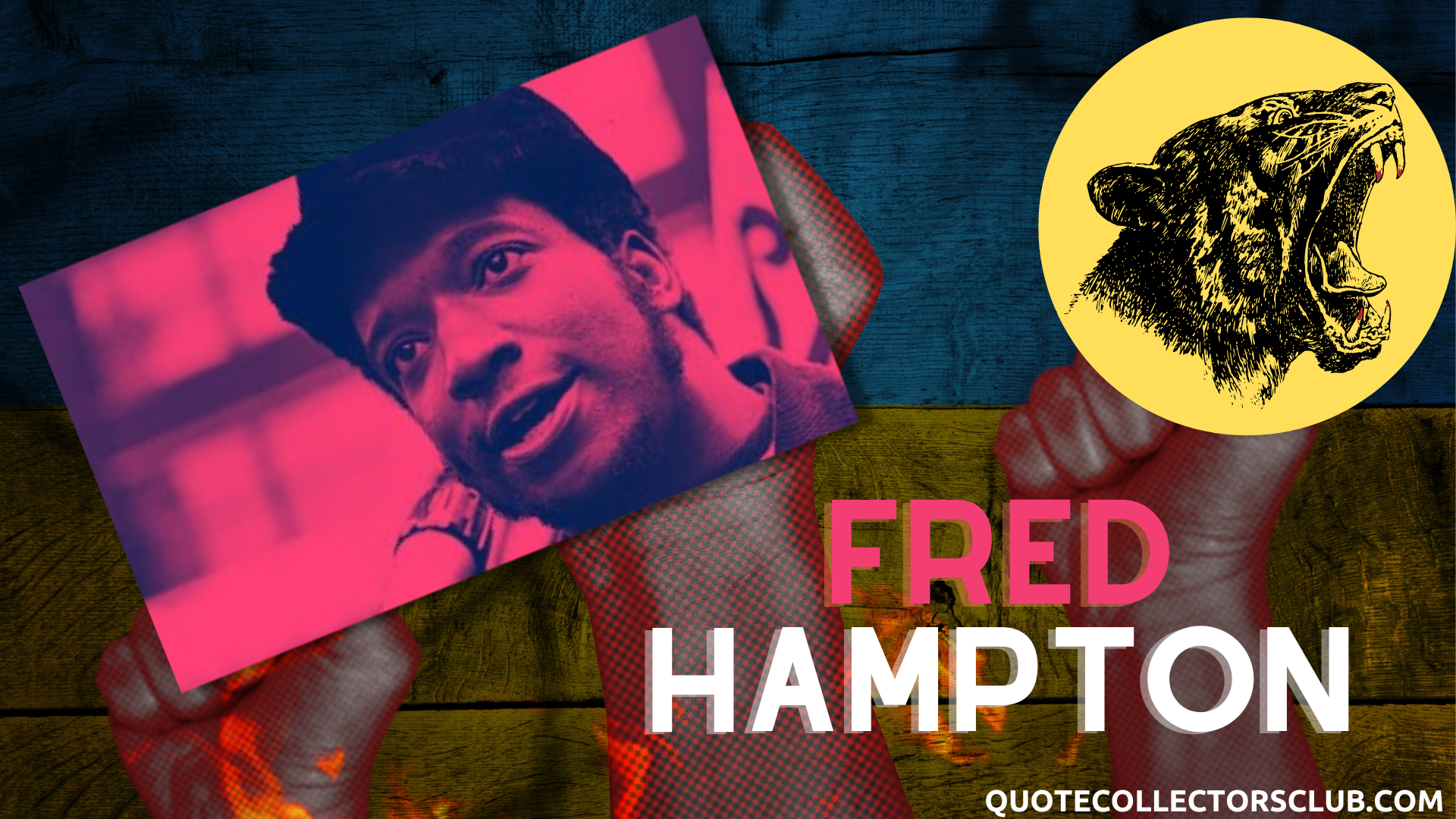 “I am a Revolutionary”- Fred Hampton

The life of Fred Hampton was tragically cut short, but his legacy as an American activist lives on. He was just 21 years old when he was killed by the police, but in that short time, he accomplished a lot.

He was a leader of the Black Panther Party and worked tirelessly to fight for civil rights and social justice. His quotes are inspiring and provide insight into his mindset and the values that drove him. In this article, we will explore some of his best quotes and discuss what they mean for us today.

Few American activists are as widely revered as Fred Hampton. A passionate speaker with a powerful message, Hampton dedicated his life to fighting for the rights of the black community. He was born in 1948 in Maywood, Illinois, and early on, he displayed a natural talent for leadership.

As a teenager, he joined the Black Panther Party and quickly rose through the ranks. At just 21 years old, Hampton was elected Chairman of the Illinois chapter of the Party. He quickly gained a reputation as an effective and charismatic leader, and his influence began to spread beyond Illinois.

Hampton traveled to Washington D.C. to meet with Huey Newton, the co-founder of the Black Panther Party. The two men hit it off immediately, and Hampton soon became one of Newton’s closest confidants.

Hampton returned to Illinois invigorated by his meeting with Newton, and he redoubled his efforts to advance the cause of the Black Panther Party.

He started a free breakfast program for children and helped to establish a free medical clinic. He also worked tirelessly to build alliances with other civil rights groups. His efforts paid off: by 1971; the Black Panther Party had grown from just a few dozen members to over 4,000.

However, Hampton’s success made him a target for law enforcement agencies, who saw him as a threat to stability.

In May 1969, Hampton was charged with robbing an ice cream truck driver and stealing $71 in ice cream bars. He was convicted the following month and sentenced to two to five years in jail. However, he was released on bond pending an appeal of his conviction.

In December 1969, while he was asleep in his bed, Fred Hampton was assassinated by Chicago police officers acting on orders from the FBI.

Fred Hampton’s brief life was cut tragically short, but his legacy lives on. He remains an inspiration to activists around the world, and his example continues to challenge us to fight for a more just and equitable society.

About the Book I Am A Revolutionary: Fred Hampton Speaks

I Am a Revolutionary is an essential book for anyone interested in social justice. Fredrick Hampton was a powerful and influential voice in the Civil Rights movement, and his words still resonate today.

In this collection of essays, Hampton discusses the importance of community organizing, the need for unity among marginalized groups, and the power of love as a force for change.

He also tackles difficult topics like police brutality and white supremacy, shedding light on the systemic racism that continues to plague our country. I Am a Revolutionary is a stirring call to action that is as relevant now as it was when it was first published.

Anyone who cares about making the world a better place should read this book.

Here are the best Fred Hampton Quotes I am a Revolutionary

Hampton was known for his eloquent speeches and his ability to unite people of all races and backgrounds. He also worked tirelessly to improve the lives of his community. Let’s take a look at some of his best quotes:

In these powerful words, Fred Hampton called on people to fight for what they believed in. All too often, people give up when the going gets tough, but Hampton reminds us that struggle is essential to success.

He also challenges us to consider what we are fighting for. If we don’t believe in our cause, then we don’t deserve to win. This quote is a call to action for anyone who wants to make a change in the world. It’s a reminder that progress comes through determination and hard work and that victory is always worth the fight.

2. “You learn by participation.”~ Fred Hampton

Fred Hampton was a civil rights leader who understood that politics and war are essentially two sides of the same coin. In politics, groups compete for power and resources without resorting to violence.

However, as soon as one side resorts to bloodshed, the conflict becomes a war. Hampton believed that war is nothing more than politics with bloodshed. This means that the only difference between politics and war is the amount of violence involved.

For Hampton, this was an important distinction to make because it showed that both politics and war are ultimately about power. By understanding this, Hampton was able to effectively fight for civil rights using both political and military tactics.

This simple quote from Fred Hampton summarizes an important principle of effective revolutionary action: knowing what you’re doing. Too often, would-be revolutionaries allow their excitement and passion to override their understanding of the situation and their capabilities, leading to disaster.

For example, imagine a group of protesters who decide to block a busy highway to make their voices heard. If they don’t have a clear plan or understanding of the situation, they could easily end up in a dangerous and chaotic situation.

On the other hand, if they know what they’re doing, they can use their actions to effectively communicate their message and bring about change. In short, revolutionaries must always be mindful of the importance of knowledge and planning.

Otherwise, their actions are likely to do more harm than good.

6. “The Black Panther Party is about the complete revolution. We not gonna go out there and half do a thing. And you can let the pigs know it.”~ Fred Hampton

7. “We know that the pigs fuck with us cause they know we’re doing something.”~ Fred Hampton

9. “A lot of people think the revolution is bullshit, but it’s not.”~ Fred Hampton

This quote is often misinterpreted as meaning that everyone should be out in the streets fighting for change. However, what Hampton is saying is that the revolution starts with each individual.

If we want to see a change in the world, we need to start with ourselves. We need to be the change we want to see. Only then can we hope to create a truly revolutionary movement.

So, next time you hear someone say that the revolution is bullshit, remember what Fred Hampton said and know that they’re wrong. The revolution starts with you.

10. “You Can Murder a Liberator, But You Can’t Murder Liberation.”~ Fred Hampton

Fred Hampton was a powerful voice in the Civil Rights Movement, and his words still resonate today. In this quote, he is speaking about the need for complete satisfaction – meaning the need to fight until there is true justice.

He starts by saying that killing a few people will only get you so far. You might feel satisfied after taking out a few bad actors, but it won’t be enough. If you want real change, you need to keep fighting.

And eventually, you will get “complete satisfaction.” This quote is a call to action, a reminder that we all have a responsibility to fight for what’s right. It’s a rallying cry for justice, and it’s as relevant today as it was when Fred Hampton first said it.

13. “If you walk past a hospital room and see a sign that says “Contaminated” and then you try to lead people into that room, either those people are mighty dumb, you understand me, cause if they weren’t, they’d tell you that you are an unfair, unjust leader that does not have your followers’ interests in mind.”~ Fred Hampton

Hampton was a leader of the Black Panther Party, and he believed that the only way to truly overthrow the capitalist system was through a socialist revolution. He argued that black capitalism simply perpetuated the cycle of exploitation and oppression, and it was not a viable solution to the problem.

While some people may disagree with Hampton’s views, his quote is an important reminder that we need to continue fighting for a more just and equitable society.

16. “The people have to have the power: it belongs to the people.” ~ Fred Hampton

Fred Hampton was a revolutionary leader in the 1960s who believed that power belonged to the people. He argued that the government could not be trusted to represent the interests of the people and that it was up to the people to take control of their own lives.

Hampton was a powerful speaker and an eloquent writer, and his words continue to inspire those who fight for justice today. In this quote, he reminds us that we have the power to change our own lives and that we should not rely on others to do it for us.

We must seize our power and use it to create the change we want to see in the world.

Fred Hampton was an American activist who inspired many with his words of wisdom. He was killed at the young age of 21, but his legacy lives on.

We hope you enjoyed these 16 best quotes from Fred Hampton. If you have any suggestions for other inspiring activists, let us know in the comments below.