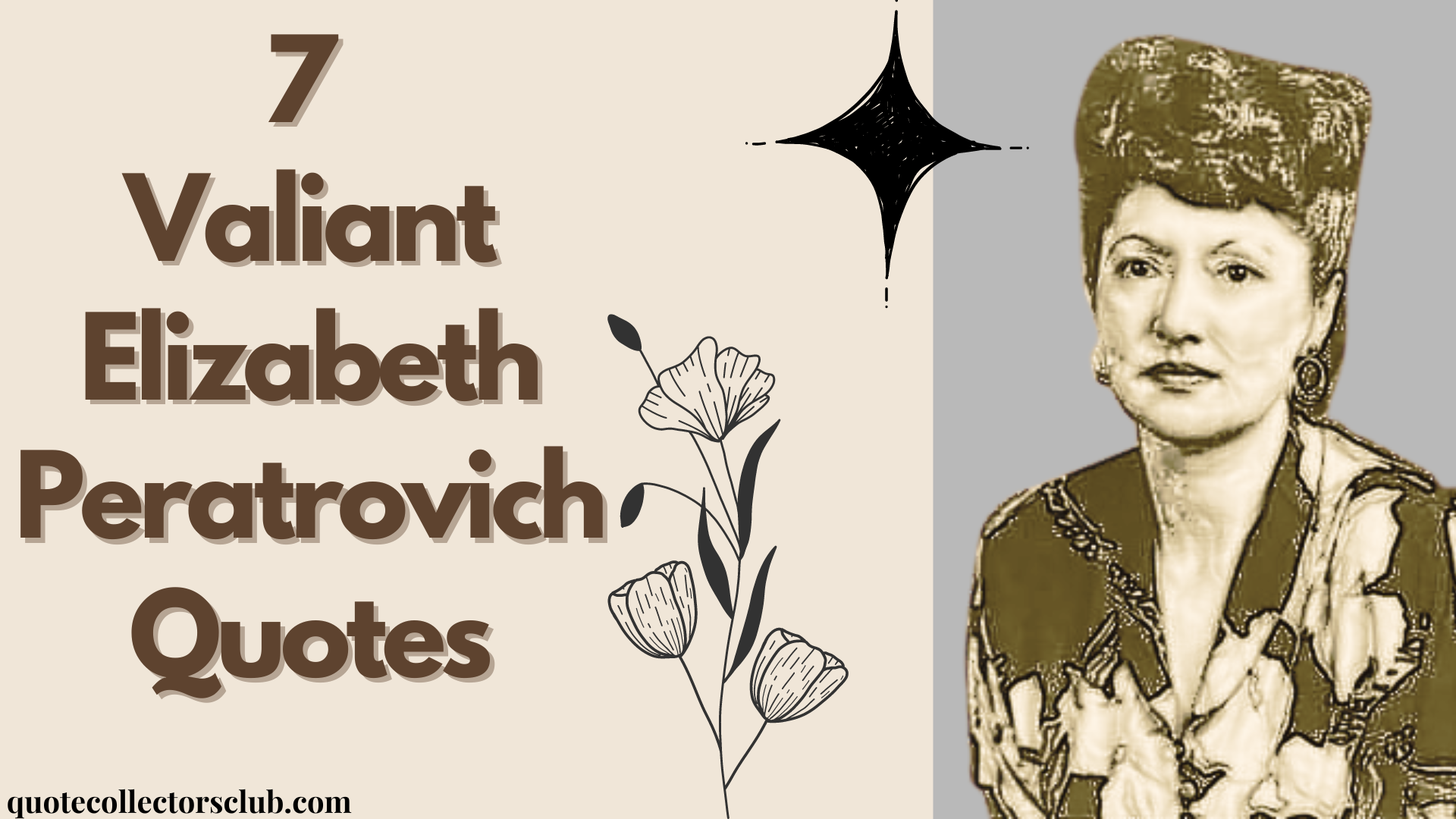 Did you know that the first woman to give a speech before the Alaska territorial legislature was an American civil rights activist named Elizabeth Peratrovich? She is known for her powerful speeches and quotes about human rights. In this article, we will take a look at some of her best quotes and share why they are so important. Stay tuned!

Elizabeth Peratrovich was a civil rights activist who worked tirelessly to secure equal rights for Alaska’s native population. Her work is considered important in American history because she helped to break down the barriers of racial discrimination and bring about a more inclusive society.

Peratrovich was born on July 4, 1911, in Petersburg, Alaska, and she grew up in a traditional Tlingit household. She witnessed firsthand the unfair treatment of Alaska’s Native people, and she was determined to make a change.

In 1945, she testified before the Alaska Territorial Legislature in support of a bill that would ban racial discrimination. Her testimony was instrumental in the passage of the bill, which made Alaska the first state to outlaw discrimination based on race.

Peratrovich continued to fight for Native rights throughout her life, and her legacy continues to inspire Americans today.

Elizabeth Peratrovich’s work helped to pave the way for other civil rights activists who were fighting for the equality of all Americans. In memory of this legendary lady, let’s take a look at some of her most inspirational quotes:

1. “Asking you to give me rights implies that they are yours to give.” ― Elizabeth Peratrovich

When Elizabeth Peratrovich spoke these words in 1945, she was speaking truth to power. Too often, those in positions of authority assume that they have the right to dictate the terms of others’ lives.

However, as Peratrovich points out, this is not the case. Everyone has the inherent right to self-determination, and no one has the right to take that away. Peratrovich’s words are as relevant today as they were seventy-five years ago, and they serve as a reminder that we all have a responsibility to fight for our rights.

Only by speaking truth to power can we hope to create a world where everyone is treated with dignity and respect. Thanks to Elizabeth Peratrovich, we are reminded that our rights are not something to be given or taken away – they are ours to fight for.

2. “I must demand that you stop trying to deny me the rights that all people deserve.”― Elizabeth Peratrovich

When Elizabeth Peratrovich made this statement, she was speaking out against a system that had oppressed her people for generations. In Alaska, Native Americans were denied basic human rights, and Peratrovich argued that this was unjust.

She pointed out that the very act of asking for rights implied that they belonged to the oppressor and not to the oppressed. Peratrovich’s words echoed the sentiments of many other civil rights activists, who argued that demanding equality was not enough.

They also needed to demand respect and dignity. By speaking out against injustice, Peratrovich helped to pave the way for future generations of Native Americans. Thanks in part to her efforts, Alaska Natives now enjoy the same rights as all other Americans.

3. “You as legislatures can assert to the world that you recognize the evil of the present situation.” ― Elizabeth Peratrovich

Her words ring as true today as they did over seventy years ago. Racism is still a very real problem, both in the United States and around the world. Legislatures have the power to enact laws that protect minority groups from discrimination and hate.

They also have the power to send a message to the world that they will not tolerate bigotry and intolerance. By passing laws that ensure equality for all, legislatures can help to create a more just and equitable society.

Elizabeth Peratrovich was a powerful voice for change, and her legacy continues to inspire people to fight for justice.

4. “Speak your intent to help us overcome discrimination.” ― Elizabeth Peratrovich

By speaking of your intent to help us overcome discrimination, you are helping to create a more inclusive society for everyone. Discrimination creates barriers that prevent people from fully participating in society and achieving their goals.

When you speak out against discrimination, you are sending a message that everyone is welcome and valued. This helps to break down the barriers that discriminate against people and allows everyone to interact on a more level playing field.

When we all work together to overcome discrimination, we can create a more just and equitable society for everyone.

5. “The ability to understand without condemnation, accept our friends and enemies in the light of their weaknesses, is something we must acquire early in life in order to find happiness in this world.”― Elizabeth Peratrovich

All of us want to be happy, but sometimes it can seem like the world is working against us. We may find ourselves in conflicts with friends and family or struggling to overcome personal challenges. In times like these, it’s easy to lose sight of our own happiness.

However, the ability to understand and accept others, even in the light of their weaknesses, is a key to finding happiness in this world. When we can see beyond our personal differences and disagreements, we open ourselves up to the possibility of true connection.

And it is only through these connections that we can hope to find the lasting happiness we all desire.

No matter how many laws are enacted, there will always be people who break them. There are a variety of reasons why people may choose to commit crimes, ranging from financial need to a desire for power or revenge.

Even with stiff penalties in place, some individuals will calculate that the potential rewards outweigh the risks. In addition, some crimes are simply opportunistic and may not be preventable through any type of legal deterrent.

Ultimately, no law will eliminate crime entirely. However, effective law enforcement and punishment for criminal activity can help to discourage would-be offenders and make our communities safer places to live.

7. “I would not have expected that I, who am barely out of savagery, will have to remind gentlemen with 5,000 years of recorded civilization behind us of our rights.” ― Elizabeth Peratrovich

When Elizabeth Peratrovich made this statement during a hearing on the Alaska Equal Rights Act in 1945, she could not have known that her words would resonate so deeply. Yet, in the seventy-five years since she spoke them, her words have come to symbolize the fight for justice and equality.

For Peratrovich, the fight for equal rights was personal. She saw firsthand the discrimination that Alaska Natives faced on a daily basis. Yet, she also saw the strength and resilience of her people.

In the face of oppression, they continued to practice their traditions and maintain their culture. By speaking out against discrimination, Peratrovich helped to empower her people and give them a voice.

In doing so, she helped to change the course of history. Thanks to her courage and determination, Alaska Natives finally had the opportunity to live their lives with dignity and respect. seventy-five years later, we continue to benefit from her legacy.

Elizabeth Peratrovich is an inspiration to us all. She was a woman who fought for the rights of her people and won. Her quotes are powerful, and they still hold weight today.

We hope you enjoyed these seven quotes from Elizabeth Peratrovich as much as we did. If you have any suggestions for similar posts in the future, let us know!