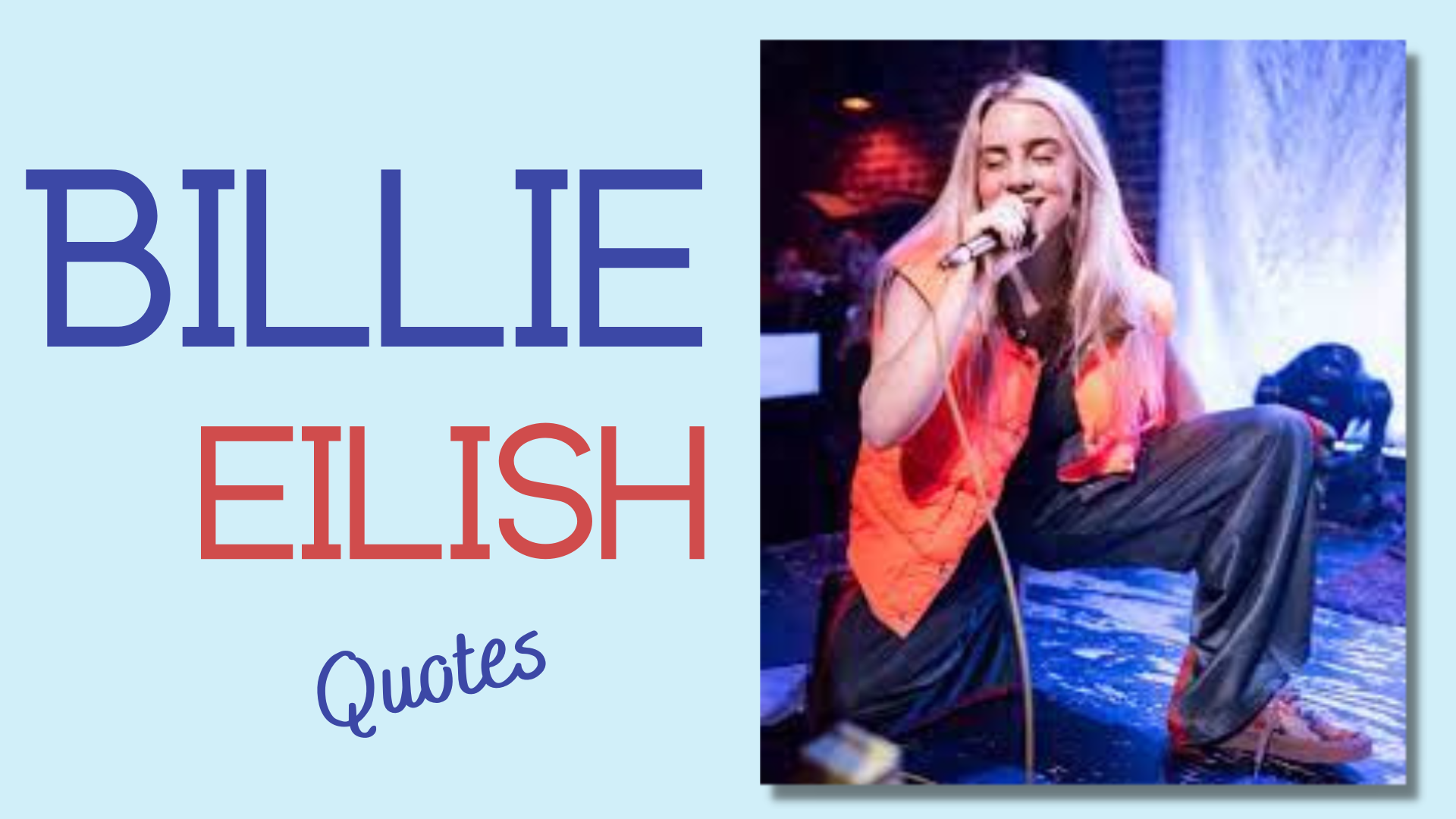 In a world where it seems like the norm is to be negative, Billie Eilish is a ray of sunshine. The 20-year-old American singer-songwriter has been making waves in the music industry with her unique sound and honest lyrics.

Her songs are filled with emotion, and she isn’t afraid to bare her soul in front of millions of people. In case you need some inspiration today, we’ve gathered some of Billie’s best quotes.

At only 20 years old, Billie Eilish has taken the music world by storm. Born on December 18, 2001, and raised in Los Angeles, California, Eilish began writing and recording songs as a teenager with her brother Finneas O’Connell. Her unique blend of pop, hip-hop and electronica caught the attention of major labels, and in 2016 she signed with Interscope Records.

Since then, Eilish has released a string of hits, including “Ocean Eyes (Re-released by Interscope in 2016),” “Bellyache (2017),” and “lovely (2018).” With her ethereal voice and dark lyrics, Eilish has established herself as one of her generation’s most original and exciting artists.

She has won multiple Grammy Awards (7 times), and her debut studio album, When We All Fall Asleep, Where Do We Go? topped the charts in more than 30 countries. Billie Eilish is a truly global phenomenon, and there’s no telling what she’ll do next.

Eilish regularly advocates for animal rights and veganism on social media and has criticized the dairy, wool, and mink fur industries. In 2019, she won a PETA “Best Voice for Animals” award for online activism.

PETA named her their “Person of the Year” in 2021. Let’s take a look at some of her best quotes :

1. “I’m super self-critical, which I think is good because then I get exactly what I want. I’m critical of other people, too – I try not to be, though.”- Billie Eilish

Billie Eilish is known for her unique style and top-charting songs but also her insightful quotes. In this particular quote, Billie touches on the importance of being self-critical. She believes it is essential to be your worst critic to get exactly what you want.

This mentality has definitely helped her to achieve success in her career. Moreover, Billie also tries not to be critical of other people. She recognizes that everyone has their journey and that we should all try to be supportive of one another.

3.  “I really think the bottom line is that men are very weak. I think it’s just so easy for them to lose it.”- Billie Eilish

Men are not as strong as women, emotionally or physically. And I think it’s easy for them to say, “Oh, I can’t handle this.” Do you know? They give up so easily. As a society, we put so much pressure on men to be the breadwinners and the protectors, and I think it’s just too much for them. We must stop expecting so much from them and start supporting them more.

4. “What makes a song last is real content from a mind that is thinking a little bit harder about certain things. A lot of artists don’t really think that hard.”- Billie Eilish

5. “Even permanent things can be undone.”- Billie Eilish

Even though something may seem permanent, like a relationship or a job, it can change instantly. This is why it’s important to enjoy the moment and not take anything for granted.

Things can always change, no matter how solid they may seem. So cherish the good times and don’t dwell on the bad. Life is always moving forward, so hold tight and enjoy the ride.

6. “Being an artist doesn’t just mean you have a song. That doesn’t make you an artist. The word ‘artist’ means so many different things, and I feel like to be a real one, you really have to do it all.”- Billie Eilish

7. “People are terrified of me, and I want them to be.”- Billie Eilish

8. “There are always going to be bad things. But you can write it down and make a song out of it.”- Billie Eilish

Billie Eilish’s music is known for its dark and honest lyrics, which often explore difficult topics like mental health and heartbreak. In a recent interview, Eilish explained how she uses her music as a way to process her own emotions.

For Eilish, songwriting is a form of cathartic self-expression that allows her to confront her demons and turn her pain into something beautiful. In a world that can often feel overwhelming and discouraging, Eilish’s music serves as a reminder that even the darkest experiences can be transformed into something positive.

9. “I love people talking about me; I love anybody just looking at me.”- Billie Eilish

10. “When I write, I try to become different characters.”- Billie Eilish

When Billie Eilish sits down to write a song, she doesn’t just try to capture her own emotions and experiences. Instead, she strives to become different characters, tapping into their unique perspectives and stories. This allows her to create richer, more multi-dimensional songs that resonate with listeners deeper.

One of the things that makes her such a successful artist is her ability to channel other people’s experiences and bring them to life through her music. When you listen to Eilish’s songs, you’re not just hearing her story but the stories of the many different characters she has created. And that’s what makes her music so special.

12. “You can write a song about being in love with someone, but you don’t have to be in love with anyone.”- Billie Eilish

13. “It’s really about not wishing away the present and the past and wishing you were in the future, but just being hopeful and content with the idea of change.”- Billie Eilish

14. “People think you have to go through something to write about it, and you absolutely do not. You can write about, like, a shoe. It’s a story.”- Billie Eilish

15. “I think everybody deserves an equal amount of appreciation whether how old they are, but I mean, I’m cool with the praise. I’m good.”- Billie Eilish

The above quote just goes to show that even though she is young, she is confident in herself and her abilities. This is a great attitude, and we hope more people adopt it. We should all be appreciated for who we are and what we do, regardless of age.

16.  “Words are more powerful than some noises. Noises won’t last long. Lyrics are so important, and people don’t realize that.”- Billie Eilish

17. “Time is kind of an amazing thing because you can do so much with it. I think people underestimate time… I don’t want to just sit on my phone for hours.”- Billie Eilish

Recently, Eilish spoke about the importance of time. It’s clear that Eilish values her time and uses it wisely. She understands that time is a precious commodity and shouldn’t be wasted.

18. “People have so much going on in their heads. I’m like, if you could write a song, you’d feel so much better!”- Billie Eilish

20. “I’m a really particular person. I want it my way.”- Billie Eilish

Billie Eilish’s quote speaks to her dedication as an artist. She knows what she wants and goes after it with everything she has. This level of commitment is evident in her music, which is known for its originality and emotion. Eilish’s artistry is all about pushing boundaries and taking risks, and her fans love her for it.

Billie Eilish is definitely one of the most exciting and talked about singers of this generation. She’s unafraid to be herself, no matter what anyone thinks, which comes across in her lyrics and quotes.

We hope you enjoyed reading through our collection of her 20 best quotes. Do you have a favorite? Let us know in the comments!