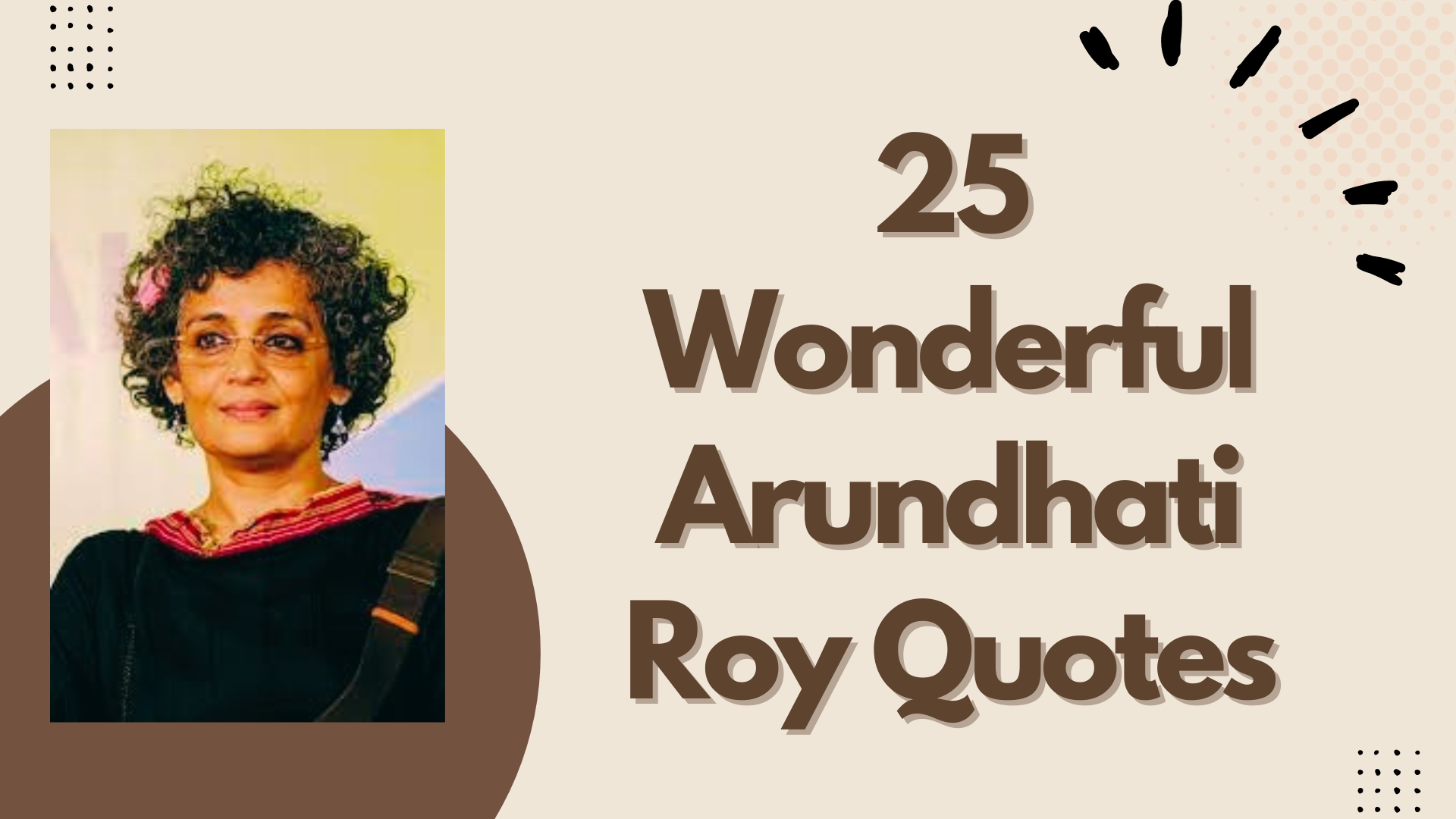 Arundhati Roy is an Indian author best known for her novel The God of Small Things, which was published in 1997. She has also written several non-fiction works on topics such as politics and the environment.

Roy is considered a powerful voice in Indian literature and has been praised for her eloquent prose and insightful commentary. In this article, we will take a look at some of the best quotes by Arundhati Roy.

Arundhati Roy is best known for her novel The God of Small Things (1997), which won the Man Booker Prize. Born in Shillong, Assam, India, in 1961, Roy studied architecture in Delhi before moving to Kerala, where she became involved in environmental activism.

In addition to her novels, she has written several collections of essays on politics, religion, and social issues. In 2001, she published Capitalism: A Ghost Story, a critique of the neoliberal policies that have led to growing inequality in India.

She has also been an outspoken critic of the Indian government’s policies toward Kashmir and the nuclear arms race. In recent years, she has turned her attention to climate change, calling it “the biggest crisis humanity has ever faced.”

Roy’s work is defined by its passion and commitment to justice. She is a fearless voice for the oppressed and marginalized, and her writing is marked by beauty and humanity.

Here are some of the best Arundhati Roy Quotes

Arundhati Roy’s work has often been compared to that of George Orwell and Graham Greene. Whether she is writing about politics or fiction, Arundhati Roy is an author who always commands attention. So, Let’s  take a look at 15 of the best Arundhati Roy quotes:

1. “Things can change in a day.”― Arundhati Roy

Just as things can change for the worse in a day, they can also change for the better. All it takes is a little bit of time and perspective. So if you’re having a bad day, don’t despair. Things can and will get better.

2. “Either way, change will come. It could be bloody, or it could be beautiful. It depends on us.”― Arundhati Roy

3. “People always loved best what they identified most with.”― Arundhati Roy

This is a quote that I love because it is so true. People always love best what they identify most with. This could be a number of things: their culture, their family, their beliefs, or even something as simple as their favorite color. Whatever it is, we all have things that we identify with and that we love because they are a part of who we are.

When we see someone else who shares those things with us, it makes us feel connected to them and like we have something in common. That connection is what helps us to form bonds with other people and to feel like we belong. It is what makes us human.

4. “The American way of life is not sustainable. It doesn’t acknowledge that there is a world beyond America. ”― Arundhati Roy

5. “The moment I saw her, a part of me walked out of my body and wrapped itself around her. And there it still remains.”― Arundhati Roy

6. “It is curious how sometimes the memory of death lives on for so much longer than the memory of the life that is purloined. ”― Arundhati Roy

7. “That’s what careless words do. They make people love you a little less.”― Arundhati Roy

In a world where words are often carelessly thrown around, it’s important to remember the power that they have. Words can be used to build people up or tear them down, and once said, they can never be taken back.

This quote is a reminder that we should think before we speak and consider the effect our words will have on others. Too often, we say things in the heat of the moment that we later regret. But if we take a step back and think about the potential harm our words could cause, we may be able to avoid hurting the people we love.

After all, words are just sounds and letters – but they have the power to change lives. Choose your words carefully, and use them wisely.

8. “It was a time when the unthinkable became the thinkable and the impossible really happened”― Arundhati Roy

9. “The only dream worth having, I told her, is to dream that you will live while you’re alive and die only when you’re dead.― Arundhati Roy

10. “Flags are bits of colored cloth that governments use first to shrink-wrap people’s minds & then as ceremonial shrouds to bury the dead.”― Arundhati Roy

Arundhati Roy’s quote speaks to the power that flags have over people. Flags are often used as a symbol of patriotism and national pride. They are flown at government buildings and public events, and they are displayed in homes and on cars.

In many ways, flags have become synonymous with countries and even with specific governments. However, as Roy suggests, flags can also be used to control and manipulate people. By wrapping people’s minds around the symbolism of the flag, governments can create a sense of loyalty and allegiance.

And when necessary, flags can also be used to bury the dead, both figuratively and literally. In times of conflict or unrest, flags can be powerful tools for both governments and citizens.

11. “There is a war that makes us adore our conquerors and despise ourselves.”― Arundhati Roy

12. “I am completely a loner. In my head, I want to feel I can be anywhere. There is a sort of recklessness that being a loner allows me.”― Arundhati Roy

13. “Some things come with their own punishments.”― Arundhati Roy

14. “Change is one thing. Acceptance is another.”― Arundhati Roy

It’s often said that change is the only constant in life. And it’s true – whether we like it or not, change is always happening, whether on a personal level or on a global scale. But just because change is inevitable doesn’t mean that it’s always easy to accept.

In fact, for many of us, it can be quite difficult to adjust to new circumstances, whether they be good or bad. But as the saying goes, “change is one thing. Acceptance is another.” Learning to accept change – and the new challenges that come along with it – is an important part of life.

It allows us to grow and adapt in the face of adversity and ultimately become better people as a result. So next time you’re faced with a major change, try to remember this – it might just help you through it.

16. “Enemies can’t break your spirit, only friends can.”― Arundhati Roy

Betrayal is one of the worst feelings one could ever experience. When it comes from a friend, it hits that much harder. We put our trust in them, and they broke it. It feels like a knife to the heart. We question everything we ever did, every conversation, every shared laugh.

We wonder what we could have done differently. We beat ourselves up over it and feel like we will never be good enough. But that’s not true. Enemies can’t break your spirit because they don’t know you as your friends do. They don’t know your weaknesses and insecurities.

They haven’t seen you at your lowest point. They haven’t been there for you when you needed them most. But friends have. And that’s why when a friend betrays us; it hurts so much more than anything an enemy could ever do to us. Because we trusted them. And they let us down.

But we are stronger for it. We get back up and dust ourselves off, and we learn from our mistakes. And we move on from the betrayal, wiser and more cautious but still open to the possibility of true friendship.

17. “There are things that you can’t do – like writing letters to a part of yourself. To your feet or hair. Or heart.”― Arundhati Roy

18. “He folded his fear into a perfect rose. He held it out in the palm of his hand. She took it from him and put it in her hair.”― Arundhati Roy

19. “Another world is not only possible, she is on her way. On a quiet day, I can hear her breathing.”― Arundhati Roy

20. “There’s really no such thing as the ‘voiceless’. There are only the deliberately silenced, or the preferably unheard.”― Arundhati Roy

21. “Do we need weapons to fight wars? Or do we need wars to create markets for weapons?”― Arundhati Roy

It’s a chicken-and-egg situation: do we need weapons to fight wars, or do we need wars to create markets for weapons? There’s no easy answer, but it’s an important question to consider. On one hand, it’s clear that wars have always been a driver of technological innovation.

The invention of gunpowder and the development of new methods of warfare both required and inspired advances in metallurgy and engineering. In turn, these innovations led to even more deadly conflict, as empires vied for supremacy on a global scale.

Today, the Arms trade is a multi-billion dollar industry, and the latest generation of weapons is more sophisticated than ever before. But does this mean that we are doomed to an endless cycle of violence? Or is there another way?

Perhaps the real question is not whether we need weapons to fight wars but why we fight wars in the first place. Only by addressing the root causes of conflict can we hope to break the cycle of violence and move towards a more peaceful future.

22. “And the air was full of Thoughts and Things to Say. But at times like these, only the Small Things are ever said. Big Things lurk unsaid inside.”― Arundhati Roy

24. “Capitalism is destroying the planet. The two old tricks that dug it out of past crises–War and Shopping–simply will not work.”― Arundhati Roy

Many people believe that capitalism is the root of all environmental problems. After all, it is capitalism that has driven the industrial revolution, which has led to massive pollution and the depletion of natural resources.

And it is capitalism that encourages consumerism, which results in mountains of waste. But is capitalism really to blame? Or are we simply using it as a convenient scapegoat?  No offense to Arundhati Roy, but the fact is that capitalism is not inherently bad. In fact, it can be a powerful force for good.

For example, capitalism has led to the development of new technologies that are cleaner and more efficient. It has also motivated businesses to adopt sustainable practices.

And it has created incentives for individuals to reduce their consumption. So while capitalism may have contributed to some environmental problems, it also has the potential to help solve them.

25. “He held her as though she was a gift. Given to him in love. Something still and small. Unbearably precious.”― Arundhati Roy

Arundhati Roy is a world-renowned author and activist who has inspired people all over the globe with her words of wisdom. These 25 quotes will give you a glimpse into the mind of this amazing woman and show you why she is such an inspiration to so many.

We hope you enjoyed reading them as much as we did! If you have any suggestions for quotes that we should add to our list, let us know in the comments section below.