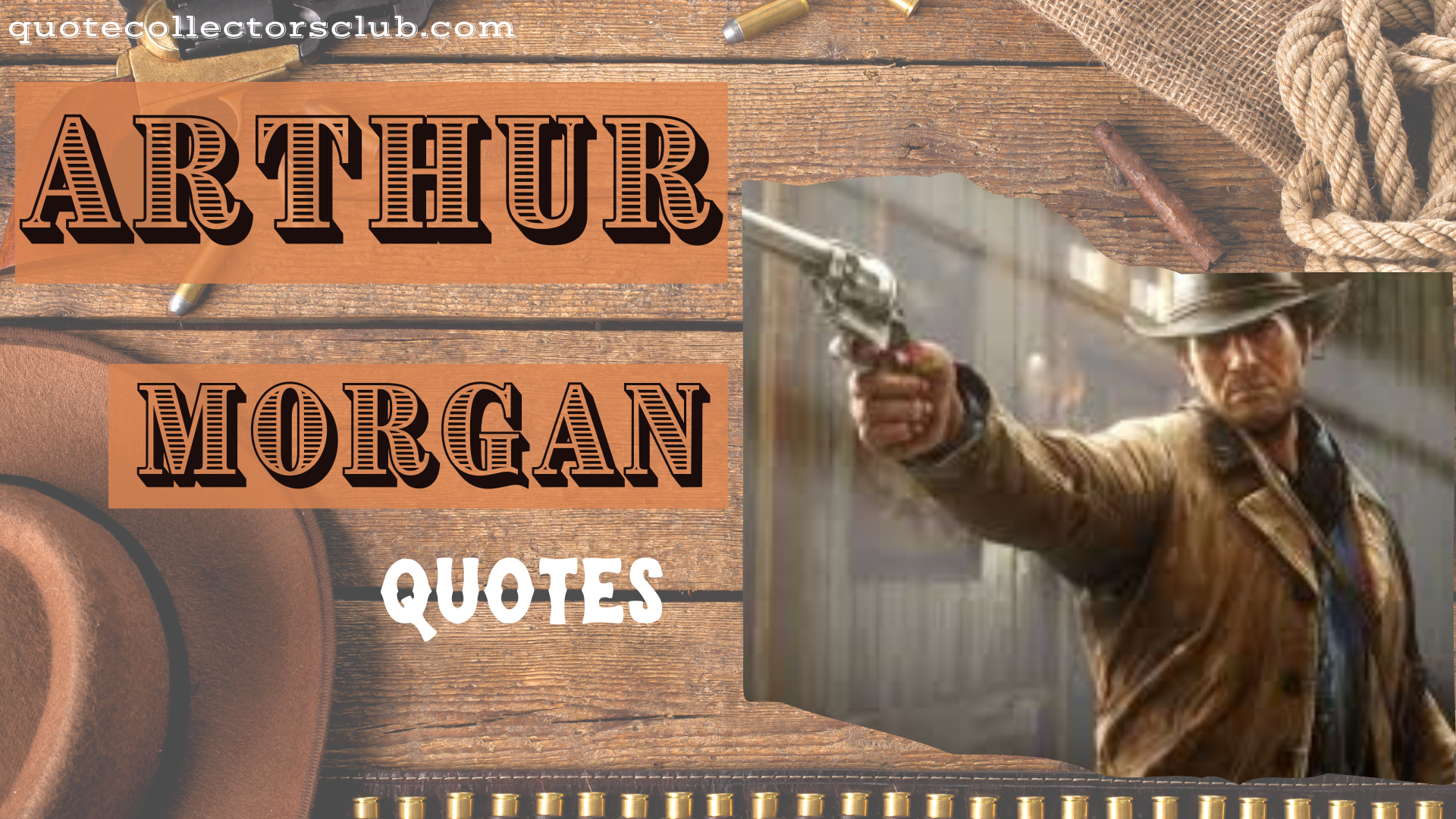 Red Dead Redemption 2 is a much-anticipated game released in October of 2018. The game has been praised for its story, characters, and graphics. One of the most well-loved characters in the game is Arthur Morgan, the main playable protagonist. Arthur is a complex character with a lot of depth, and his quotes are just as interesting as he is.

Clark drew on performers such as Toshiro Mifune, John Wayne, and Rob Wiethoff for Arthur’s character, who is complex enough to help players create their own journey while still making sense in the game.

Arthur’s performance was widely well-received by critics, with many citing his gripping character journey and the depth of feeling he brought to the role. He was nominated for numerous awards and ultimately won Best Performance at The Game Awards.

Arthur became a part of Dutch van der Linde’s gang at the age of fourteen after he lost his parents. Arthur soon had a son with Eliza, a waitress, and was always supportive of them financially until they were killed during a robbery. Eventually, Arthur became Dutch’s most dedicated enforcer over time.

In May 2022, GamingBolt gave Arthur the title of best video game protagonist. They applauded the writing, Clark’s performance, and the character’s well-roundedness. Let’s take a look at some of the best Arthur Morgan Quotes:

1. “You don’t get to live a bad life and have good things happen to you.” – Arthur Morgan

Like many great men before him, Arthur Morgan understands that our actions and choices have consequences. Whether choosing to fight or to flee in a dangerous encounter or splitting one’s time between one’s personal ambitions and obligations to the people who depend on us, every decision we make has ripple effects that shape our lives and the lives of others around us.

For Arthur, the toll of all these choices is heavy, as he struggles under the weight of his past while grasping onto hope for a better future. But he has also learned that no matter how hard we try to do right by those around us, not everyone will be happy with our actions or receive the outcomes they desire.

In this way, Arthur embodies the truth behind this poignant quote: life is full of difficult decisions and unpredictable outcomes that require us to take responsibility for our actions and accept whatever consequences come our way. And in order to truly succeed in this world, we must stay true to ourselves, even if it means sacrificing some happiness along the way.

Even if there are times when we wish we could simply turn back time or start over from scratch, which Arthur has certainly experienced himself, ultimately, it is up to each individual person to decide what matters most both for their own happiness and for those whose lives they affect along their journey. Only then can we rest assured knowing that whatever hardships come our way, whether expected or unexpected, we are prepared to handle them with grace and dignity, just like Arthur Morgan would.

The quote is a call to stay true to our values and those we care about. For many of us, this means being loyal to our families and loved ones, standing by them through thick and thin, and fighting to protect them when they need it most. And while it can be tempting sometimes to put our desires first, we know that in the long run, it’s usually better to take the high road and prioritize what matters.

In the case of Arthur Morgan, the main playable protagonist of the video game Red Dead Redemption 2, this principle takes on an even deeper significance. As one of the last surviving members of a band of outlaws known as the Van der Linde gang, he has chosen a life of crime and danger over a safe existence in polite society.

But despite his questionable choices and past transgressions, Arthur remains fiercely loyal to his friends and family in ways that belie his rough exterior. Whether it means risking everything for his comrades or coming back into town at night just to see his fretful old mother one more time, Arthur does what he must for those he holds closest to his heart.

Inherently selfless and deeply compassionate despite their criminal activities and shady dealings with others, Arthur is truly loyal to individuals and the ideals that truly matter in life. And perhaps, above all else, this makes him someone worth looking up to in dark times when loyalty itself seems like an impossible dream.

5. “Some jobs aren’t for saving, and some legacies are for pissing on.” – Arthur Morgan

When faced with countless challenges and hardships, losing sight of what truly matters in life can be easy. But as the wise and world-weary protagonist of Red Dead Redemption 2, Arthur Morgan knows that success and happiness are found not in temporary thrills or material possessions but in always doing one’s best.

Arthur always stays true to himself and his principles, whether he is taming wild horses, rounding up fellow outlaws, or fighting off rival gangs and lawmen. And though his journey has been filled with heartache and tragedy, Arthur is also guided by a fundamental optimism about life and humanity.

He believes that even the most trying circumstances can ultimately lead to great growth, both as an individual and as a member of the community that he deeply cares for.

7. “Lack of something to feel important about is almost the greatest tragedy a man may have.” – Arthur Morgan

9. “Just do one thing or the other, don’t try to be two people at once.” – Arthur Morgan

10. “Next time, let the wolves eat all your brain—then you’ll be a genius.” – Arthur Morgan

Arthur Morgan’s quote can be understood by anyone who has struggled to come to terms with the past. At its core, the quote embodies the idea that we cannot change our choices or actions in the past; what is done is done. However, rather than giving up in despair, we must instead look ahead and continue moving forward.

Even when we have made mistakes or hurt others with our words or actions, it is still possible to find redemption and start anew. By focusing on the present moment and treasuring the relationships that matter most to us, we can begin to heal from our past wounds and eventually find peace within ourselves.

12. “You speak as if killing was something I cared about.” – Arthur Morgan

14. “Humanists are not characteristically strong in faith, hope, and love.” – Arthur Morgan

The character of Arthur Morgan is a flawed but endlessly fascinating human being. Like many of us, he struggles with doubt and uncertainty and often questions whether his choices have any real impact on the world around him. Despite these doubts, he remains determined to persevere in the face of adversity. Perhaps this is why the above quote resonates so deeply with him.

As a humanist, he recognizes that our lives can be filled with moments of doubt and disillusionment. Yet even in our darkest moments, we must never lose faith in ourselves or those around us. For he knows that hope is what gives life its meaning, hope that we can overcome our challenges and find joy and happiness in the world around us.

And while love may not always be within reach, this lack may drive us to keep striving towards it. So despite his shortcomings as a character, Arthur embodies the essence of what it means to be truly human, a constant struggle between belief and doubt that ultimately calls us to embrace both heart and mind alike.

15. “Get the hell outta here and be a goddamn man!” – Arthur Morgan

Overall, I think these quotes from Arthur Morgan are extremely relatable and provide great life lessons that we can all learn from. His words show that no matter what trials and tribulations we may face in our lives, we should never give up hope and always try to see the good in people.