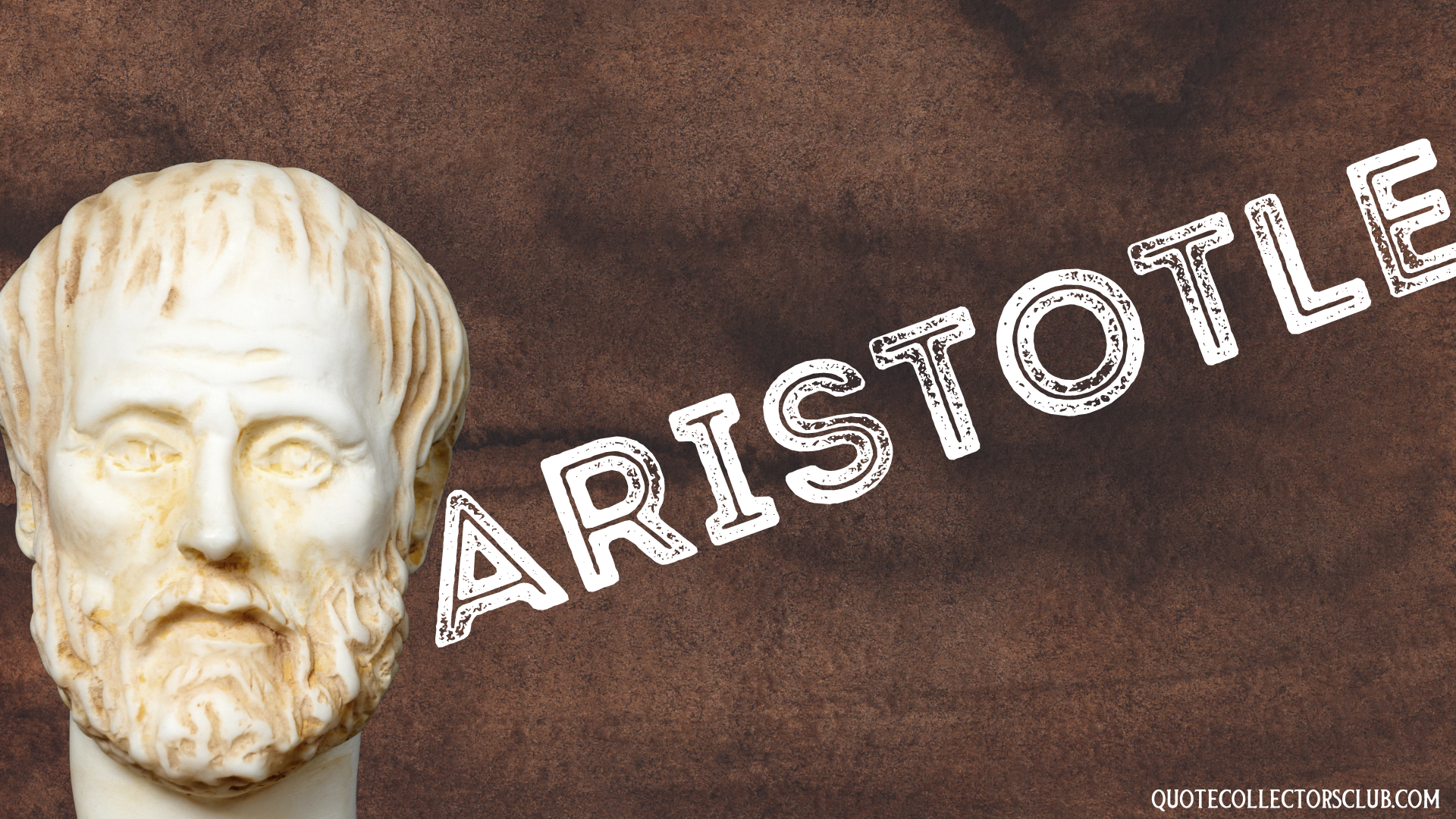 Aristotle was born in 384 BC and is considered one of the most influential philosophers of all time. He is best known for his work in ethics, political theory, and metaphysics. But what makes Aristotle so interesting is that he wasn’t just a dry philosopher.

He had a sharp wit and was able to communicate complex ideas in an easy-to-understand way. In this article, we will explore some of his best quotes and discuss what they mean for us today.

Aristotle was one of the most groundbreaking thinkers of his time. His ideas on science, philosophy, and politics shaped the way we think about the world today. He was born in 384 BC in the city of Stagira in Macedonia.

His father was a doctor, and Aristotle himself studied medicine before turning to philosophy. He eventually became a student of Plato, and after Plato’s death, he left Athens. Aristotle’s most famous students were Alexander the Great and Cassander.

He wrote on a wide range of topics, including physics, biology, zoology, meteorology, poetry, theatre, music, logic, rhetoric, linguistics, politics, government, ethics, and more. His work exerted a significant influence on Western thought for centuries after his death. Aristotle died in 322 BC at the age of 62.

Here are the best Aristotle Quotes

Over 2300 years after his death, Aristotle is still one of the most significant figures who has ever lived. He made significant contributions to nearly every area of human knowledge at the time, as well as laying the groundwork for many new areas. Let’s explore some of his best quotes:

1. “A constitution is the arrangement of magistrates in a state.”- Aristotle

Aristotle’s quote suggests that the way in which a state’s rulers are arranged is key to the success of that state. A well-organized state will have magistrates who are able to work together efficiently and make decisions in the best interests of the state.

Conversely, a poorly-organized state is likely to be rife with conflict and incompetence, as different factions vie for power and fail to agree on key issues. This can lead to civil unrest and, eventually, the collapse of the state itself. Therefore, it is clear that Aristotle believed that a strong constitution was essential to the stability and prosperity of any state.

3. “A likely impossibility is always preferable to an unconvincing possibility.”- Aristotle

4. “All human actions have one or more of these seven causes: chance, nature, compulsions, habit, reason, passion, desire.”- Aristotle

5. “All human beings, by nature, desire to know.”- Aristotle

7. “At his best, man is the noblest of all animals; separated from law and justice, he is the worst.”- Aristotle

8. “Change in all things is sweet.”- Aristotle

9. “Character may almost be called the most effective means of persuasion.”- Aristotle

10. “Comedy aims at representing men as worse, Tragedy as better than in actual life.”- Aristotle

11. “Criticism is something we can avoid easily by saying nothing, doing nothing, and being nothing.”- Aristotle

The above quote is particularly relevant in today’s age of social media, where it’s easy to hide behind a screen and avoid engaging with others. By saying nothing, doing nothing, and being nothing, we can avoid the criticism that comes with putting ourselves out there.

However, this also means that we miss out on the opportunity to learn and grow from our mistakes. Criticism can be painful, but it can also be an essential part of learning and becoming the best version of ourselves.

12. “Courage is the first of human qualities because it is the quality which guarantees the others.”- Aristotle

13. “Democracy is when the indigent, and not the men of property, are the rulers.”- Aristotle

14. “Dignity does not consist in possessing honors but in deserving them.”- Aristotle

15. “Each man judges well the things he knows.”- Aristotle

17. “Education is an ornament in prosperity and a refuge in adversity.”- Aristotle

18. “Equality consists in the same treatment of similar persons.”- Aristotle

19. “Even when laws have been written down, they ought not always to remain unaltered.”- Aristotle

20. “Every rascal is not a thief, but every thief is a rascal.”- Aristotle

21. “Excellence is never an accident. It is always the result of high intention, sincere effort, and intelligent execution; it represents the wise choice of many alternatives – choice, not chance, determines your destiny.”- Aristotle

Essentially, Aristotle is saying that greatness doesn’t happen by chance. It requires a clear intention, hard work, and good judgment. You have to be constantly making choices – whether it’s what you’re going to wear or what you’re going to say – and each choice takes you one step closer to your destiny.

22. “Fear is pain arising from the anticipation of evil.”- Aristotle

23. “For what is the best choice, for each individual is the highest it is possible for him to achieve.”- Aristotle

24. “Friends hold a mirror up to each other; through that mirror, they can see each other in ways that would not otherwise be accessible to them, and it is this mirroring that helps them improve themselves as persons.”- Aristotle

25. “Friendship is essentially a partnership.”- Aristotle

26. “Good habits formed at youth make all the difference.”- Aristotle

27. “Happiness depends upon ourselves.”- Aristotle

29. “Happiness is an expression of the soul in considered actions.”- Aristotle

30. “Happiness is the settling of the soul into its most appropriate spot.”- Aristotle

31. “He who has never learned to obey cannot be a good commander.”- Aristotle

Aristotle’s quote suggests that those who have never learned to follow instructions will not make good leaders. To lead effectively, one must be able to understand and value the importance of obeying orders. Without this fundamental skill, it would be difficult to create a cohesive team that can work together towards a common goal.

Furthermore, effective leaders must be able to communicate clearly and concisely, something that is hard to do if you are not used to following instructions yourself.

32. “He who is to be a good ruler must have first been ruled.”- Aristotle

34. “I count him braver who overcomes his desires than him who conquers his enemies, for the hardest victory is over self.”- Aristotle

35. “I have gained this by philosophy that I do without being commanded what others do only from fear of the law.”- Aristotle

36. “In all things of nature, there is something of the marvelous.”- Aristotle

37. “It is during our darkest moments that we must focus to see the light.”- Aristotle

38. “It is easy to perform a good action but not easy to acquire a settled habit of performing such actions.”- Aristotle

39. “It is not enough to win a war; it is more important to organize the peace.”- Aristotle

40. “It is possible to fail in many ways… while to succeed is possible only in one way.”- Aristotle

41. “It is the mark of an educated mind to be able to entertain a thought without accepting it.”- Aristotle

This is an important skill in today’s world, where there is an overwhelming amount of information available at our fingertips. It is all too easy to accept something as fact without taking the time to question it, but the educated mind knows that it is always worth taking a step back and critically examining an idea before accepting it.

42. “It is well to be up before daybreak, for such habits contribute to health, wealth, and wisdom.”- Aristotle

43. “Knowing yourself is the beginning of all wisdom.”- Aristotle

44. “Liars, when they speak the truth, are not believed.”- Aristotle

46. “Man is a goal-seeking animal. His life only has meaning if he is reaching out and striving for his goals.”- Aristotle

47. “Man is by nature a political animal.”- Aristotle

49. “Men are swayed more by fear than by reverence.”- Aristotle

51. “Misfortune shows those who are not really friends.”- Aristotle

Anyone who has ever been through a tough time knows that it can be difficult to tell who your true friends are. When things are going well, everyone wants to be around you and share in your good fortune. But as soon as misfortune strikes, many of those so-called friends disappear.

This is because they were never really friends, to begin with. True friends are the ones who stick by you during the bad times, offering support and understanding even when you’re at your lowest. They don’t shy away from challenges but instead see them as an opportunity to deepen their friendship.

52. “Most people would rather give than get affection.”- Aristotle

53. “My best friend is the man who, in wishing me well, wishes it for my sake.”- Aristotle

54. “No notice is taken of a little evil, but when it increases, it strikes the eye.”- Aristotle

55. “No one would choose a friendless existence on condition of having all the other things in the world.”- Aristotle

56. “Obstinate people can be divided into the opinionated, the ignorant, and the boorish.”- Aristotle

57. “Of all the varieties of virtues, liberalism is the most beloved.”- Aristotle

58. “Perfect friendship is the friendship of men who are good, and alike in excellence; for these wish well alike to each other qua good, and they are good in themselves.”- Aristotle

59. “Piety requires us to honor truth above our friends.”- Aristotle

60. “Pleasure in the job puts perfection in the work.”- Aristotle

61. “Poetry demands a man with a special gift for it, or else one with a touch of madness in him.”- Aristotle

In this quote, he argues that poetry requires a special kind of talent or else a certain amount of madness. While this may seem like a contradiction, Aristotle is essentially saying that effective poetry comes from a place of passion and intensity.

Without these qualities, the poem will lack the power to move and inspire its readers. It is for this reason that many great poets are often considered to be somewhat mad. They see the world in a different way than most people, and their intensity allows them to translate their experiences into beautiful and moving works of art.

62. “Poetry is finer and more philosophical than history, for poetry expresses the universal, and history only the particular.”- Aristotle

63. “Poverty is the parent of revolution and crime.”- Aristotle

64. “Probable impossibilities are to be preferred to improbable possibilities.”- Aristotle

65. “Republics decline into democracies, and democracies degenerate into despotism.”- Aristotle

66. “Something is infinite if, taking it quantity by quantity, we can always take something outside.”- Aristotle

67. “Teenagers these days are out of control. They eat like pigs, they are disrespectful of adults, they interrupt and contradict their parents, and they terrorize their teachers.”- Aristotle

68. “The actuality of thought is life.”- Aristotle

69. “The aim of art is to represent not the outward appearance of things but their inward significance.”- Aristotle

70. “The aim of the wise is not to secure pleasure but to avoid pain.”- Aristotle

71. “The antidote for fifty enemies is one friend.”- Aristotle

They make you feel good about yourself and help you to navigate through tough times. A true friend knows you inside and out and will accept you for who you are.

72. “The beauty of the soul shines out when a man bears with composure one heavy mischance after another, not because he does not feel them but because he is a man of high and heroic temper.”- Aristotle

73. “The difference between a learned man and an ignorant one is the same as that between a living man and a corpse.”- Aristotle

Aristotle was one of the most influential philosophers in history. He had a lot to say about how to be happy and live a good life. These quotes are a great reminder that it’s important to focus on the positive, think before you speak, and always put your best foot forward.

We hope you enjoyed these Aristotle quotes! If you have any suggestions for other famous philosopher quotes, let us know in the comments below.