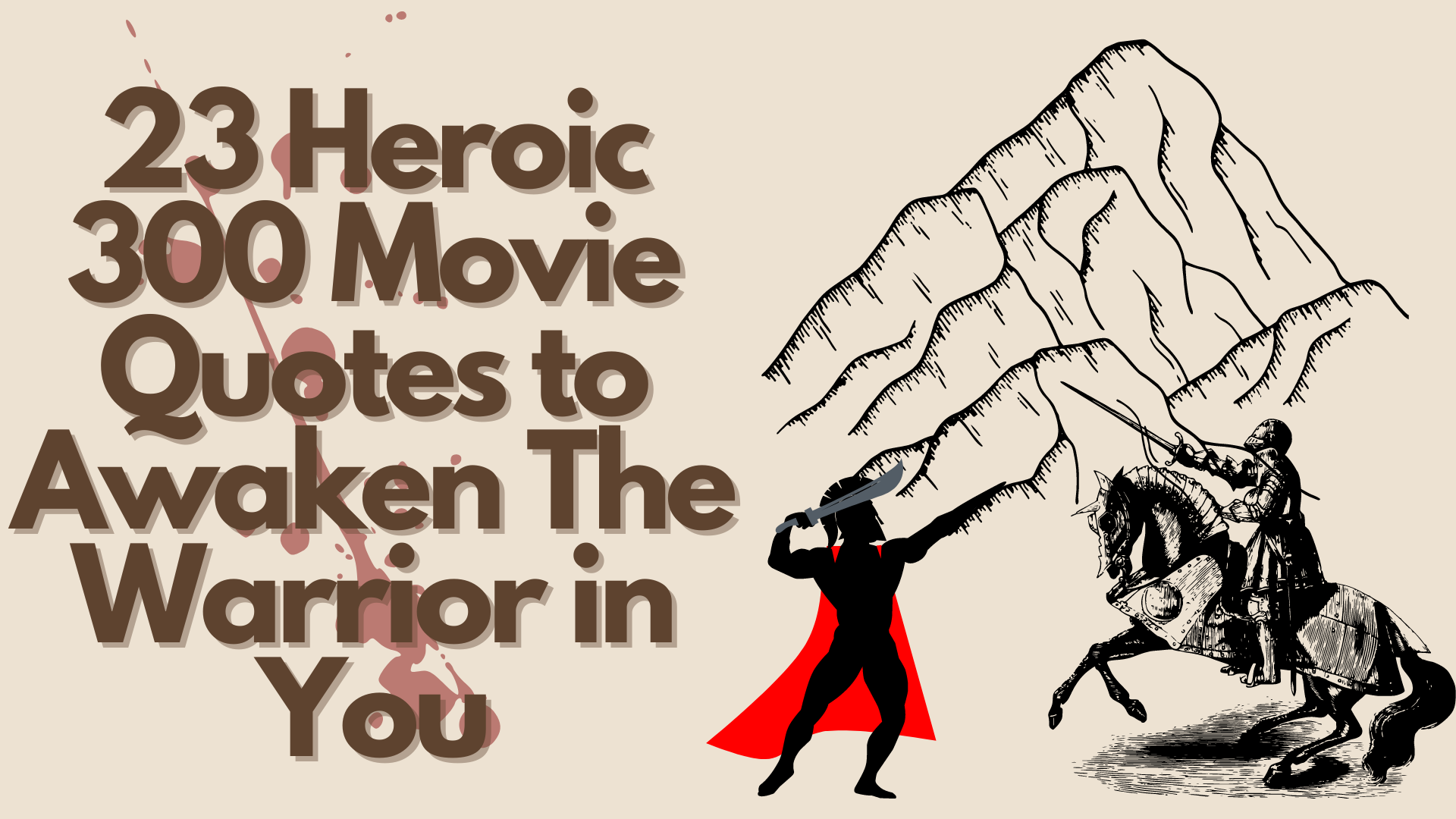 300 is a 2006 American epic historical fantasy war film based on the 1998 comic series 300 by Frank Miller and Lynn Varley. The film was directed by Zack Snyder, while Miller served as executive producer and consultant. It was filmed mostly with a superimposition chroma key technique to duplicate the comic book look.

The story is narrated by Dilios, a Spartan soldier who fought in the Battle of Thermopylae. 300 Spartans were outnumbered three to one by the Persian army, but they fought with a lot of courage and determination. This movie is full of great quotes, which we will list in this article.

The story of the movie revolves around the brave King Leonidas who takes 300 spartan soldiers to battle with 3,00,000 Persian soldiers led by Persian “God-King” Xerxes.

Producer of the movie Gianni Nunnari had planned to create a movie on the battle of Thermopylae but he was not the only one who was planning a movie on the Thermopylae battle, Director of the movie Heat (1995)  Michael Mann has also planned to make a movie based on the book “Gates of Fire” but then the idea was shelved as 300 became a huge success.

Nunnari was very much inspired by the 1998 graphic novel 300 written by Frank Miller, therefore he acquired the rights to make the motion picture.

Zack Snyder was hired for directing the movie in 2004 as he had previously directed Dawn of the Dead which was also based on Miller’s Novel.

Here Are The Best 300 Movie Quotes

Frank Miller’s Graphic Novel 300 was actually inspired by the 1962 movie The 300 Spartans. Which Miller had seen in his childhood, As now we have a brief knowledge about the movie and the story behind it, It’s time to dive into the quotes and find out what the characters and the movie wanted to convey:

1. “Give them nothing! But take from them everything!” – King Leonidas

“Give them nothing! But take from them everything!” – King Leonidas. This is one of the most popular 300 movie quotes. It perfectly defines the Spartans’ way of war. They were people who were willing to give up everything for their freedom. And they did just that at the Battle of Thermopylae.

The Spartan 300 fought to the last man against the Persian army, which outnumbered them by a huge margin. In doing so, they secured their place in history as one of the most celebrated warriors of all time.

The quote also perfectly encapsulates the Spartans’ philosophy in life: to take everything and give nothing. It is a philosophy that has resonance even in today’s world.

3. “Freedom isn’t free at all, that it comes with the highest of costs. The cost of blood.” – Queen Gorgo

The price of freedom is not something that should be taken lightly. It is something that has been paid for by the brave men and women who have fought and died for our country.

When we think about the cost of freedom, we should always remember the sacrifices of those who have made it possible for us to live in a free society.

It’s an honor to have lived at yours.”- King Leonidas

5. “Spartans! Ready your breakfast and eat hearty, for tonight, we dine in Hell!”- King Leonidas

These words were spoken by King Leonidas (played by Gerard Butler) before leading his 300 warriors into battle against the Persian army. The Spartans knew they were vastly outnumbered and outgunned, but they went into battle anyway, fighting to the last man.

Though they were ultimately defeated, the Spartans’ heroic stand inspired others to fight for freedom. Today, their story continues to resonate with people all over the world.

Whenever someone faces insurmountable odds, they can take comfort in knowing that the 300 Spartans did not back down from a fight, no matter how hopeless it may have seemed.

6. “Hundreds leave, a handful stay. Only one looks back.”-Dilios

7. “For he did not wish tribute, nor song, nor monuments nor poems of war and valor. His wish was simple “Remember us. Remember why we died”. -Dilios

8. “If they assassinate me, all of Sparta goes to war. Pray they’re that stupid. Pray we’re that lucky.”- King Leonidas

These words were spoken by King Leonidas before heading into battle against the Persians displaying the absolute confidence he had in his men. And, indeed, they were 300 brave Spartans who fought against a Persian army of millions.

Not only did they hold their own against overwhelming odds, but they also inspired other Greeks to rise up and fight for their freedom. The 300 movie quotes are just a small taste of the courage and heroism displayed by these ancient warriors.

9. “No retreat, no surrender; that is Spartan law. And by Spartan law, we will stand and fight and die. A new age has begun. An age of freedom, and all will know, that 300 Spartans gave their last breath to defend it!”- King Leonidas

10. “It is not a question of what a Spartan citizen should do, nor a husband, nor a king. Instead, ask yourself what should a free man do?” – Queen Gorgo

11. “What makes this woman think she can speak among men?” – Messenger

12. “Taught never to retreat, never to surrender. Taught that death on the battlefield in service to Sparta was the greatest glory he could achieve in his life.”-Dilios

This quote is spoken by Dilios as he tells the story of Spartan culture and how their way of life creates the best soldiers in all of Greece. The Spartans were a notoriously fierce and battle-hardened people, and their soldiers were among the most feared in the ancient world.

The quote captures the Spartan ethos perfectly – they were a people who believed that dying in battle was the greatest honor one could achieve. This philosophy made them some of the most feared warriors of their time, and it is still remembered fondly today.

13. “My heart is broken for your loss.- King Leonidas

Heart? I have filled my heart with hate.”- Captain

14. “There’s no room for softness. No place for weakness. Only the hard and strong may call themselves Spartans.”-Dilios

Then we will fight in the shade.” – King Leonidas

In the scene, King Leonidas is leading his Spartan soldiers into battle against the Persian army, and he gives a stirring speech that motivates his men to victory.

The quote has become so popular that it is often used to describe any situation where someone is outnumbered and outgunned but refuses to give up. It is a reminder that even in the darkest hour, there is always hope.

The 300 movie quotes remind us that even when the odds are against us, we can achieve great things if we never give up.

17. “You have many slaves, but few warriors. It won’t be long before they fear my spears more than your whips.”- King Leonidas

18. “It isn’t wise to stand against me. Imagine what horrible fate awaits my enemies when I would gladly kill any of my own men for victory.- Xerxes

And I would die for any one of mine.”- King Leonidas

19. “A Spartan’s true strength is the warrior next to him. So give respect and honor to him, and it will be returned to you. First, you fight with your head…- King Leonidas

Then you fight with your heart.”- Queen Gorgo

This quote is significant because it highlights the importance of teamwork and comradeship in the Spartan culture. The Spartans were renowned for their fierce loyalty to one another, and this sense of unity was key to their success on the battlefield.

This quote reminds us that victory is not only about winning battles, but also about fighting for what is right.

21. “There’s only one woman’s words that should affect the mood of my husband. Those are mine.”- Queen Gorgo

This line is so memorable because it perfectly encapsulates the Spartan attitude of being willing to die for their city and their belief in freedom. The Spartans were some of the most feared warriors in all of ancient Greece, and this quote reminds us why.

They were willing to fight to the death in order to protect their city and their way of life, and they inspired others to do the same. This quote is an excellent reminder of the power of bravery and determination in the face of overwhelming odds.

23. “There will be no glory in your sacrifice. The world will never know you existed at all! – Xerxes

The world will know that free men stood against a tyrant, that few stood against many, and before this battle was over, even a god-king can bleed.”- King Leonidas

If you loved the movie 300, then you’ll love these quotes from the film. They are a great reminder of the bravery and heroism displayed by King Leonidas and his Spartan warriors.

We hope you enjoyed this collection of quotes, please let us know if you have any favorites in the comments below.